Date Founded
1930
Date Dissolved
1980
Business/Organization Type
Agricultural Cooperative
Can you help?
You don't need to know everything, but can you improve the description? Maybe add some more details?
Log in or register and you can edit this.

Agricultural cooperatives had existed in various informal and small-scale forms for generations prior to the 1920s. However, changes in farming operations during the early part of the 20th century led to a broadening of theory and legislation. Agricultural economist Edwin Nourse wrote in 1918 that a “new agriculture [was] developing, one that was scientific, capitalistic, and commercial,” which could result in corporate farming dominating food production. Congress enabled various agricultural cooperative structures through the Capper-Volstead Act of 1922, and the Cooperative Marketing Act of 1926. A boom in farmers cooperatives resulted, which gained significant momentum during the Depression.

In North Carolina, the response occurred primarily as an outgrowth of the onset of the Great Depression. Farmers in adjoining states had increased production in the year leading up to 1929, depressing prices paid to North Carolina Farmers. Governor O. Max Gardner announced a “Live-a-Home” campaign to prod citizens of the state to redirect some of the $250 million that was being spent on food imported from out of state towards North Carolina farmers.

One month later, in January 1930, John Sprunt Hill and George Watts Hill helped convene a meeting of Durham officials and farm leaders with the governor to discuss the formation of a cooperative in Durham The cooperative (which was called an “Exchange” to avoid association with an earlier failed tobacco cooperative) was organized in March 1930 with 400 farmers, $1400 in operating capital and a $10,000 line of credit. The Hills donated the former Paragon Hosiery Mills / John O’Daniel Hosiery Mill building at 801 Gilbert Street (across the street from the Dye House) to house the new exchange

Plans for the cooperative included arrangements for the local sale of chickens, eggs, hogs, sweet potatoes, and other farm produce as well as shipment of surpluses to other markets where prices might be better, thus increasing the market reach for local producers. Membership was $1 a year, with profits distributed annually.

George Watts Hill negotiated with other exchanges in the state for the Durham facility to clean, inoculate, and certify farmers’ seed before it went on sale either in Durham or through other exchanges. He also arranged for the Durham exchange to serve as a clearinghouse for information and shipments of fertilizer and bulk supplies..

The main plant / headquarters remained in Durham, and the Dye House building was an integral part of an expanding headquarters operation, as the organization built a cold storage facility, a Poultry Processing Plant, a maintenance garage, and a hatchery built in the blocks surrounding the Dye House in the mid-1950s. In 1959, CCFE did $21 million in business ($10 million marketing, $11 million purchasing.) and sold $2.2 million worth of livestock for its members.

In 1980, Central Carolina Farmers Exchange merged with FCX, Inc. which had headquarters in Raleigh. Office headquarters were relocated to Raleigh, and the merged company was branded FCX; the facilities in Durham continued to operate under the FCX name.

FCX filed for Chapter 11 bankruptcy in February 1986; Southern States, a farm cooperative organized in 1923 in Virginia, purchased the FCX Durham assets out of receivership in 1986. In December, 1998, Southern States began to sell of their Durham portfolio. 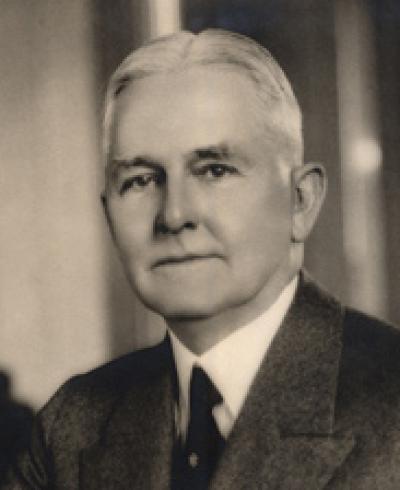 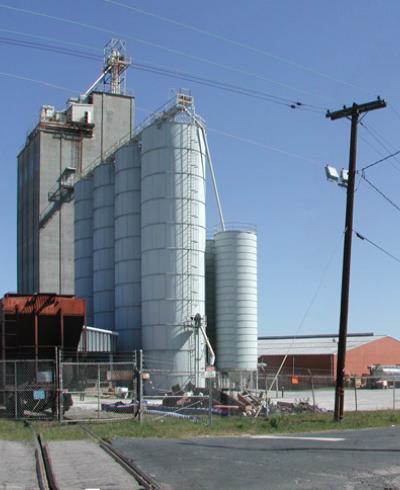 (Photo by Gary Kueber) The modern CCFX feed mill was built on the site of the former Durham Gas Company in 1965 - either replacing or supplementing the capacity of the old feed mill operation behind (to the north of) 801 GIlbert. The gas plant had been located on the site previously - since 1905. An early picture of the gas plant, below: (Courtesy...
Read More 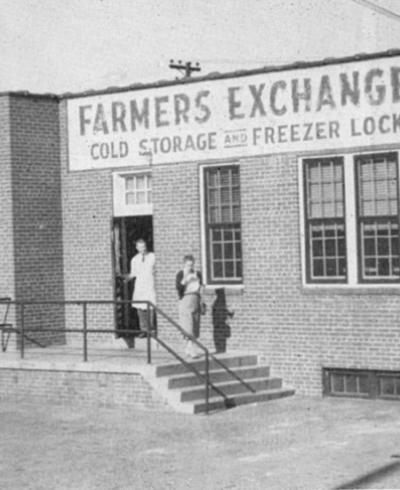 1956 (From "This is Central Carolina Farmers Exchange") The Cold Storage and Freezer Locker Plant in Durham offers all services needed for the complete processing and storage of meat for farmers and others. Processing starts with the dressed carcasses, which farmers bring to the plant or which the plant has bought for those wanting meat. For a...
Read More

1956 (From "This is Central Carolina Farmers Exchange") Farmers Exchange Chick Hatchery has a two-fold purpose–to provide a cash market for hatching eggs produced by farmer patrons with specialized flocks and to hatch the thriftiest type chicks for either broilers or layers. Growing from 3600 chicks hatched each week in 1940 to the production of...
Read More 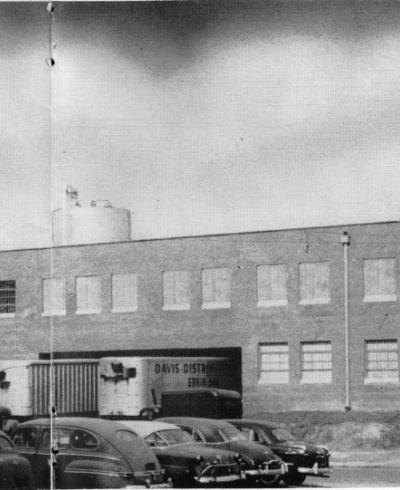 1956 (From "This is Central Carolina Farmers Exchange") "A Poultry Plant to process and market large amounts of poultry was one of the first operations started by the Exchange to give local farmers a source of income other than tobacco. When the Department began operating in 1931, there was very little poultry being grown in this section - not much...
Read More 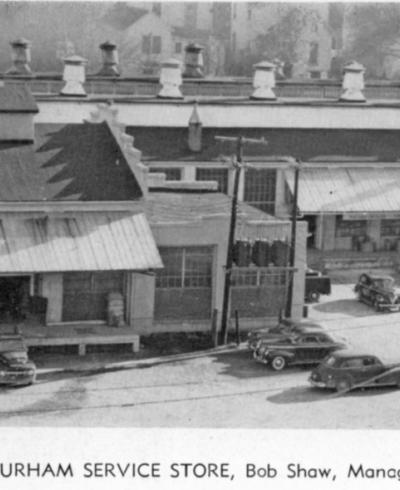 Built as a central Dye House for the Durham Hosiery Mill Company in 1921-1922, 708 Gilbert closed during the Great Depression (1934,) but reopened in 1941-1942 as part of the Durham Farmers Mutual Exchange - serving as a seed cleaning and inoculation facility and "service store"
Read More 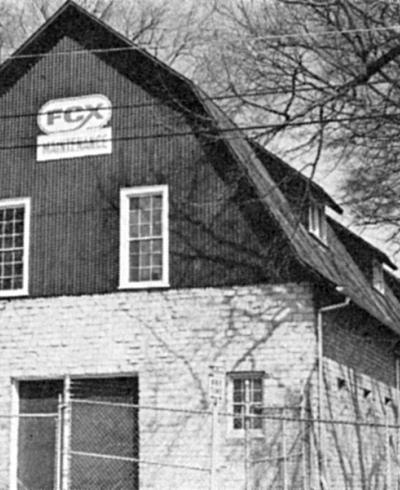 Looking north from Gilbert St., 1970s. (Durham HAI) Yet another one of my favorite buildings in Durham, the Durham stables were built around 1925 by the City of Durham for the teams of horses utilized in the construction of streets. The building replaced the earlier City Stables, located on the southwest corner of Pine and E. Pettigrew Streets in...
Read More 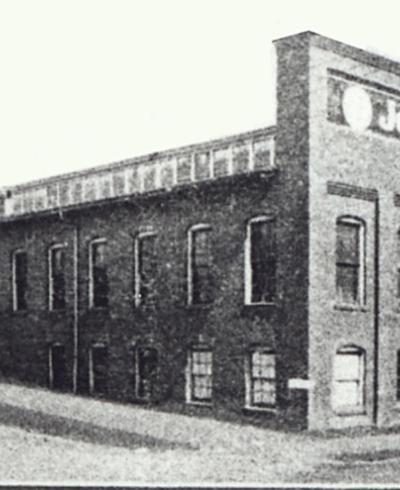 Scanned from 1924 Durham City of Industry book. Another of my favorite buildings in Durham, the John O'Daniel Hosiery Mill building, was built at 801 Gilbert St. in the late 1910s as the Paragon Hosiery Mill. It changed names rather quickly thereafter to become the Bowling-Emory Knitting Mill before being acquired in 1919 by Julian S. Carr as a...
Read More

I worked for FCX, Inc before they merged in 1980's.
I earned $50.00 annually through the pension plan when they filed for Chapter 11.
I have never collected or receive that money.
Please direct me to the right person to claim these funds.
My address is: Dorothy L. Thompson
Huntersville. NC
Thank you!

Dorothy - I've removed your address and phone number from your comment to protect your privacy. This is a history website, and is in no way affiliated with FCX or any of the other companies, groups, buildings, etc. on the site.

I have one share of capital stock that belonged to my Grandfather dated April 1 1930. Does this stock have a cash value?