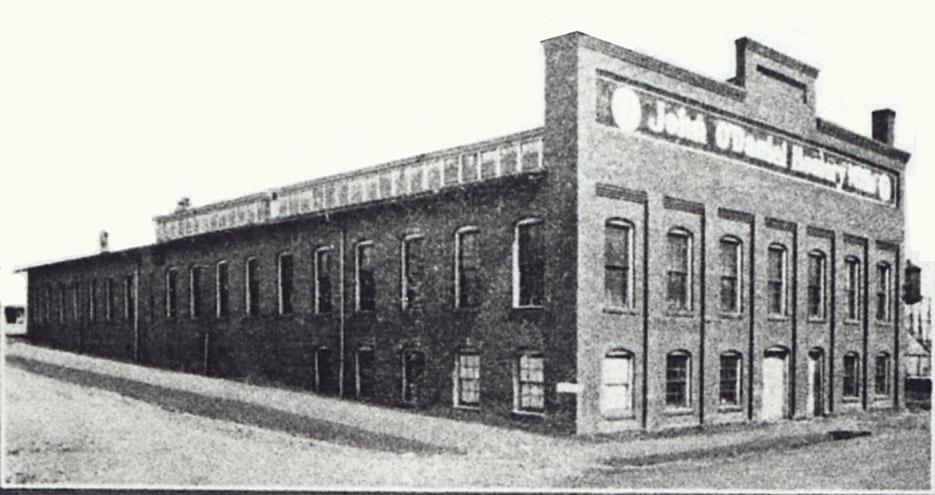 Another of my favorite buildings in Durham, the John O'Daniel Hosiery Mill building, was built at 801 Gilbert St. in the late 1910s as the Paragon Hosiery Mill. It changed names rather quickly thereafter to become the Bowling-Emory Knitting Mill before being acquired in 1919 by Julian S. Carr as a branch of his expanding Durham Hosiery Mills.

Carr named the mill after the recently (1917) deceased John O'Daniel - who the Historic Inventory euphemistically refers to as a former "servant" (rather than an enslaved person) in the Carr household. By all accounts, the relationship between Julian Carr and and John O'Daniel was an interesting one. O'Daniel is referred to in several accounts as Carr's "right-hand man." Carr was one of the first to take the then-unconventional step of hiring African-American labor in his mills. The offensive belief of the time, according to Jean Anderson, was that that "[B]lacks were incapable of running machinery." One of Carr's mills, Durham Hosiery Mill No. 2, located in Hayti on East Pettigrew St. was staffed and managed entirely by African-Americans.

Regardless, John O'Daniel was likely Carr's 'liaison' in the African-American community, helping to hire and recruit. He was one of the earliest African-American landowners in Hayti - purchasing a tract on Fayetteville St. in 1877, and he later contributed financially to the building of St. Joseph's AME.

O'Daniel's relationship with Carr led some to spread the rumor that O'Daniel was actually Carr's half-brother, which was never confirmed. Carr stated once that "John considered himself part of the Carr family." Take that as you will. John O'Daniel is buried in Geer Cemetery (which he may have been part owner of.)

The mill was also known as Durham Hosiery Mill No. 12

The John O'Daniel Hosiery Mill didn't last very long. Julian Carr died in 1924, and I believe that John Sprunt Hill took over the mills (which began waning soon after World War I). In 1930, John Sprunt Hill offered the JOD Hosiery Mills building for a Farmer's Exchange - a farmers' cooperative which would grow to 900 members by 1935. The decline in the tobacco crop in the late 1920s due to blight spurred an interest in developing a market for other farm products. 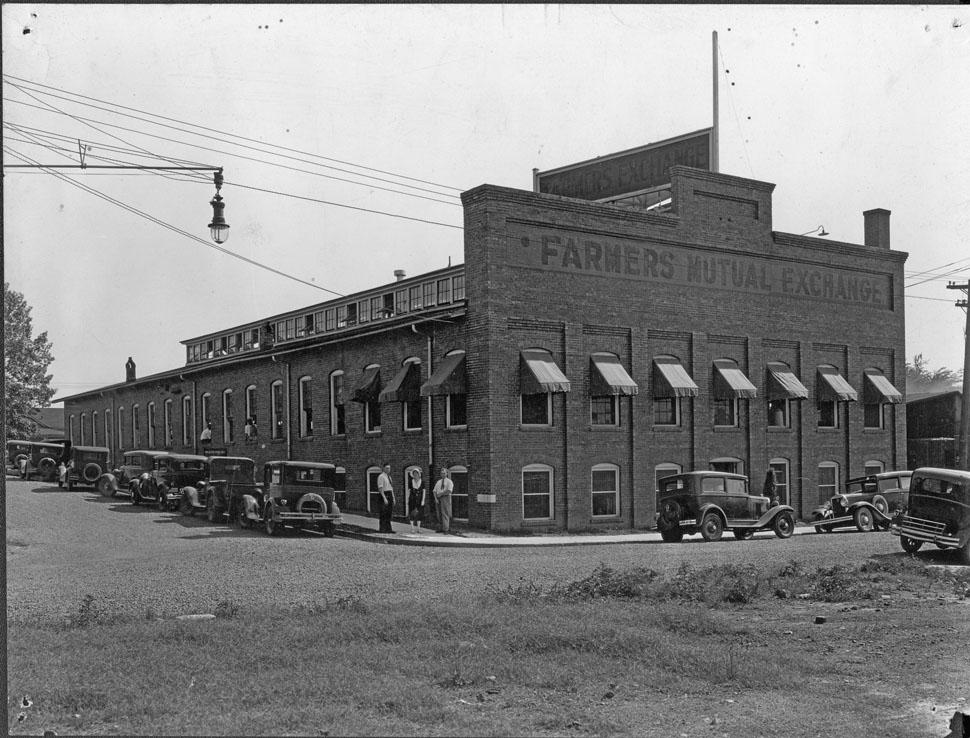 This building holds the distinction of being Durham's first 'Farmers' Market' - what was referred to as a "curb market" at the time - where the farmers would sell some of their produce directly. These early curb markets were evidently operated exclusively by women - offering "an extra source of income through the sale of poultry, eggs, baked and pickled goods, and fresh flowers and vegetables in season." (Anderson, p. 352.) This curb market would later move to Foster St. - the current Cooperative Extension building.

By 1935, the Farmers' Exchange had a chicken processing plant here, and soon thereafter (1937) had built a feed mill for processing and marketing grain just behind the site. 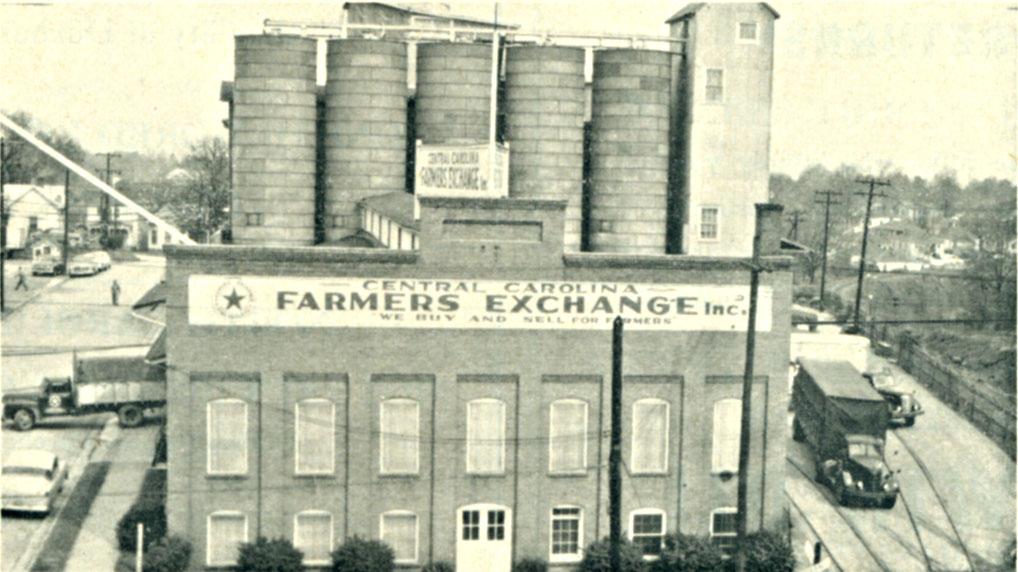 The main plant / headquarters remained in Durham, and the Dye House building was an integral part of an expanding headquarters operation, as the organization built a cold storage facility, a Poultry Processing Plant, a maintenance garage, and a hatchery built in the blocks surrounding the Dye House in the mid-1950s. In 1959, CCFE did $21 million in business ($10 million marketing, $11 million purchasing.) and sold $2.2 million worth of livestock for its members.

1956 - from "This is Central Carolina Farmers Exchange"

These personable and capable young women are the secretaries, bookkeepers, and cashiers for the main office and the eight departmental offices of Farmers Exchange in Durham. The services they perform are very vital to the efficiency and success of this company.

In 1980, Central Carolina Farmers Exchange merged with FCX, Inc. which had headquarters in Raleigh. Office headquarters were relocated to Raleigh, and the merged company was branded FCX; the facilities in Durham continued to operate under the FCX name.

FCX filed for Chapter 11 bankruptcy in February 1986; Southern States, a farm cooperative organized in 1923 in Virginia, purchased the FCX Durham assets out of receivership in 1986.

This building was likely sold off in the 1990s.  During the 1990s, a nightclub by the name of 'Cobra' was operating in this building. 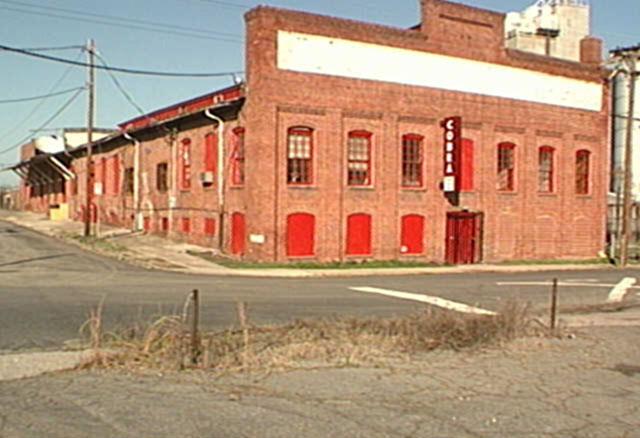 A fire destroyed the roof and much of the interior - unfortunately, the 'restoration' did not restore the original detail or the original clerestory on the roof. The building, however, remains a beauty. 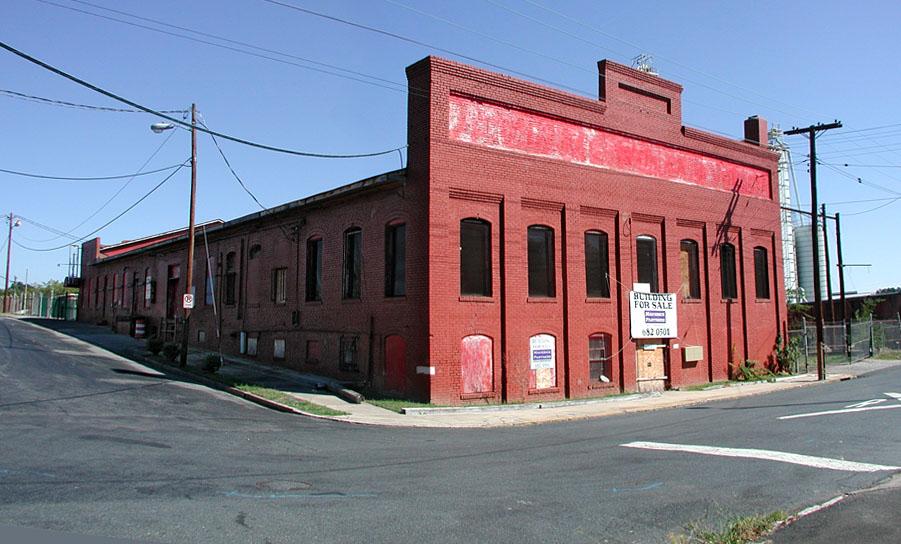 Looking northeast from Gilbert and Pearl, 2007. (Photo by Gary Kueber) 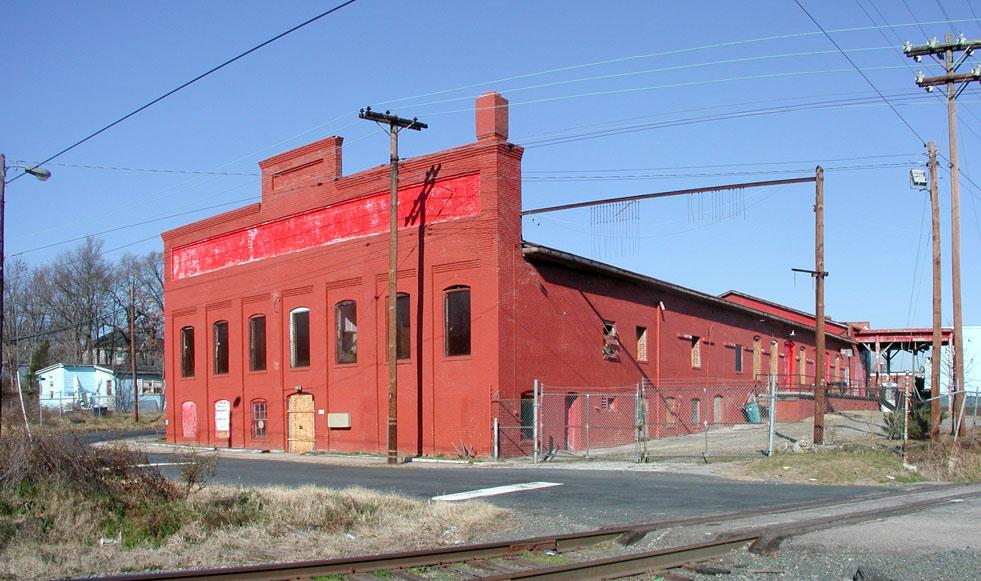 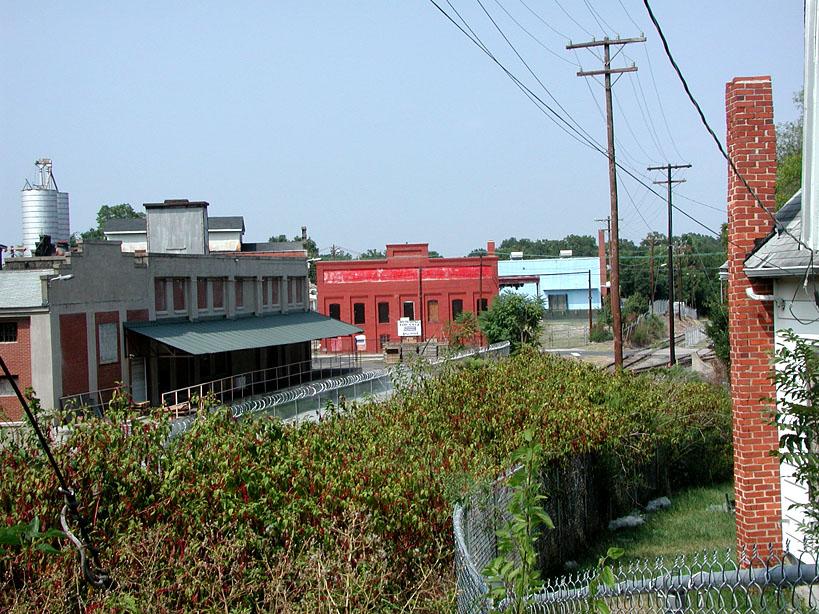 The building was purchased by Wendy Clark, entrepreneur and owner/founder of Carpe Diem Cleaning. She redeveloped the building as a shared-resource office space, targeted primarily to small and non-profit companies. 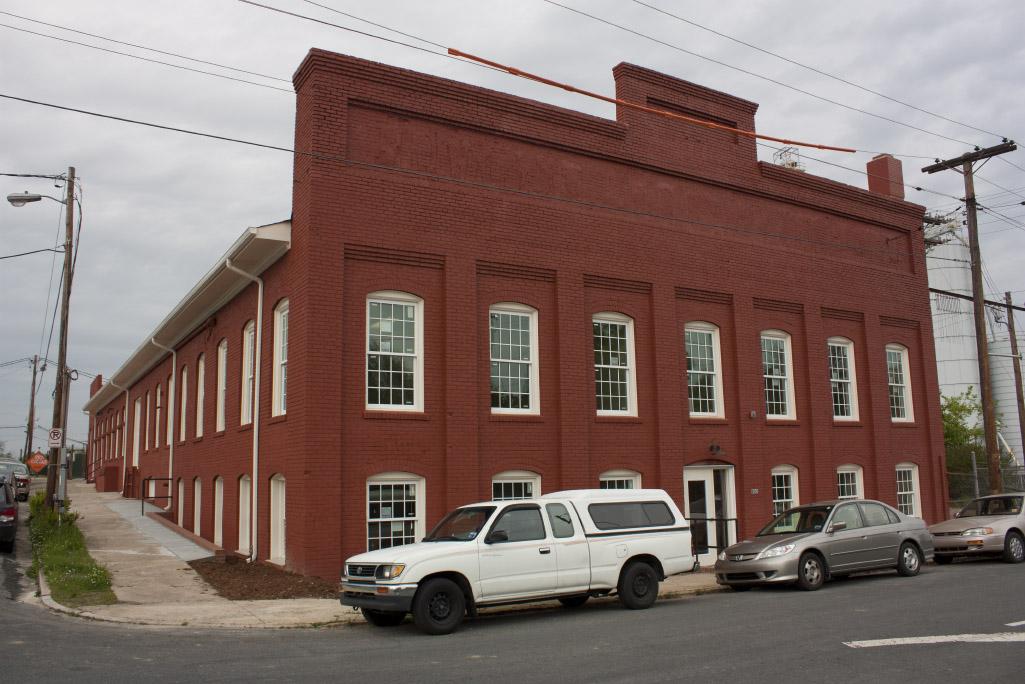 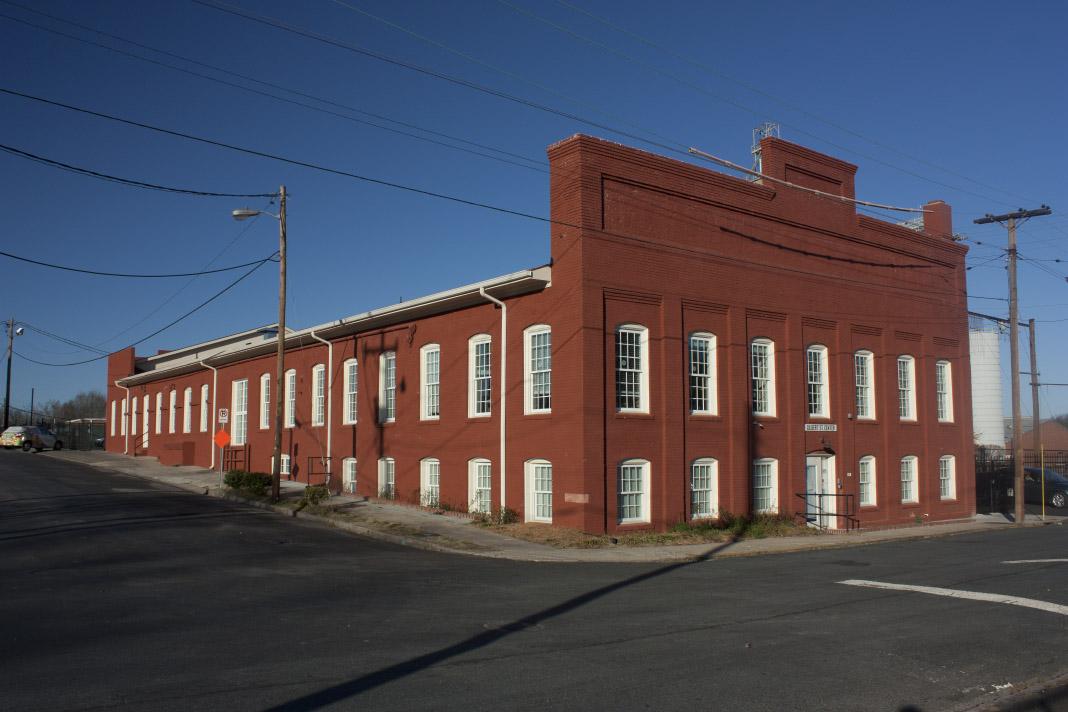 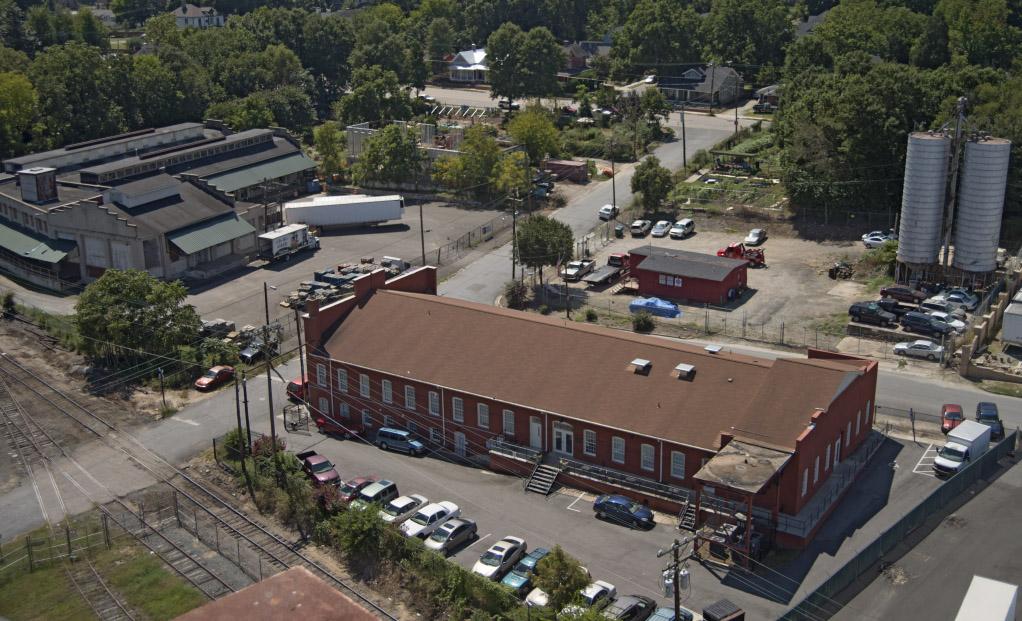 The Durham Hosiery Company had its beginnings in 1894, when it was organized by George Graham, and began operations in a building on Church Street, and subsequently, Morris Street. Later that same year, Julian S. Carr (who had achieved wealth and fame as President and partner in first Blackwell's and then the Bull Durham Tobacco Company) and John W...
Read More

Agricultural cooperatives had existed in various informal and small-scale forms for generations prior to the 1920s. However, changes in farming operations during the early part of the 20th century led to a broadening of theory and legislation. Agricultural economist Edwin Nourse wrote in 1918 that a “new agriculture [was] developing, one that was...
Read More
Related People

I appreciate your coverage of this mill for at least two reasons: (1) your interesting research and commentary on the owners/workers, and (2) the current owner is a friend of mine. Oh, and I've always loved this building, too. I notice that two of the reasons I love the building are the color and the facade. Without the high front at curbside, I don't think I'd find the building half as interesting.

BTW: for a brief time in the 90s, the building served as a Latino dance club. I don't recall how long that lasted, but I do recall I was way too chicken (about my poor Spanish) to ever visit. I don't know if the Cobra name is from that time.

Aaaaaaahhhh!!! Want that building so badly! No money! So many cool ideas! Public market! Trade skills studio and workshop!

The removal of the clearstory is s killer too. How hard would such a thing be to restore?

I made an inquiry about this building a few weeks ago and was told it was under contract. Perhaps that deal has fallen through.

I believe the building is back on the market. I looked at it recently after the contract fell through.

The inside has some weird remnants: sound studio paneling, hand-drawn Egyptian mummies, a "security office", an old performance stage.

It is an amazing, resolute building with a lot of possibilities. It requires the right owner with a lot of vision, temerity, and resources.

Thanks, all, for the comments.

To confirm Sean's comment, my information is that the contract on this building fell through, and it is back on the market.

Michael - many great possibilities. I think the expense of rebuilding a clearstory would be substantial - I wonder if they changed the roof framing, which would make it a major endeavor.

I looked at it, but would have to put in an elevator (us New Orleanians hate to climb stairs). I think it's offered at a good price, at least compared to some of Maverick's other properties.

That is an amazing building! Too bad the clearstory and windows were only recently removed. Great info!

I am the current owner of this property and for years had driven by in admiration of this wonderful place. I really wanted to live in it. I bought it hoping to convert it into condos for progressive types, passive solar, great landscaping etc. As I spent quite a bit just to clean it up, it was full of all kinds of things, tires, school desks, file cabinets etc, I realized it was a much bigger project than I could afford. I decided to sell it but only to someone that had good intentions and the resources to do it right. The place was a Latino nightclub for about three days around 2003-4 before a very suspicious fire erupted. It burned the roof and the owner at the time took the insurance money and rebuilt the roof himself, unfortunately not back to historical specs. It is now under an expired contract but the buyers have great plans for it and the resources to bring back this beauty to a use that will be good for the neighborhood. The street has a great artsy/industrial vibe with SEEDS just up the street. 4/24/2008

i stopped by the building today; i was curious because it's now being renovated. it's going to become an office building with 30 or so small offices and a common meeting/utility area. it's apparently now owned by lewis & clark (LOVE the name!).

i'll have co-owner wendy clark on my show soon -- project manager bruce oliver told me that lewis & clark wants to offer office space at a modest cost so that neighborhood entrepreneurs, artists, etc can afford to rent there.

see some pix that i took today at flickr.com/photos/durhamskywriter!

The John O'Daniel Exchange has taken a new form! It's now the Durham Exchange. Their site explains more, check out www.DurhamExchange.org.

can anybody go inside the building, i seen the outside of it, i like to see how it's looks on the in side