White Rock Baptist Church figures in the earliest origins of Hayti, organized in 1866 in the home of Mrs. Margaret Faucette, following a series of house-to-house prayer meetings. These meetings became services conducted by the Reverend Zuck Horton. Following his pastorate, Reverend Samuel Hunt, the second pastor, held services for what was then known as the "First Baptist Church" in a cotton gin on Elm Street and in a warehouse on Peabody Street.

On March 13, 1877, the first building site was purchased at a cost of $75.00 at the corner of East Pettigrew Street and Coleman Alley on land deeded from Cornelius Jordan to the "trustees of the Colored Missionary Baptist Church." The first structure was erected under the third pastor, Reverend Frederick Wilkins (1879-1881). When the building was completed, it was named “White Rock Baptist Church” because of the large white flint rock in the front yard.

In 1881-1884, the Reverend T. W. H. Woodward, became the fourth pastor and, subsequently, Reverend B. K. Butler became the fifth pastor. He left after the first year and organized the Mount Vernon Baptist Church of Durham.

The first brick building was erected on the corner of Fayetteville Street and Mobile Avenue during the ministry of the sixth pastor. Reverend A. P. Easton (1886-1897). The cornerstone for this structure was laid in 1893, and the structure was completed three years later. Sources vary as to the seating capacity of this first church, but it could have held between 350 and 1000 people. Eaton left the church in 1898 to form St. John's Baptist church - located originally on Dunstan St. and later on Fayetteville St. on part of the later site of Speight's Service Station. 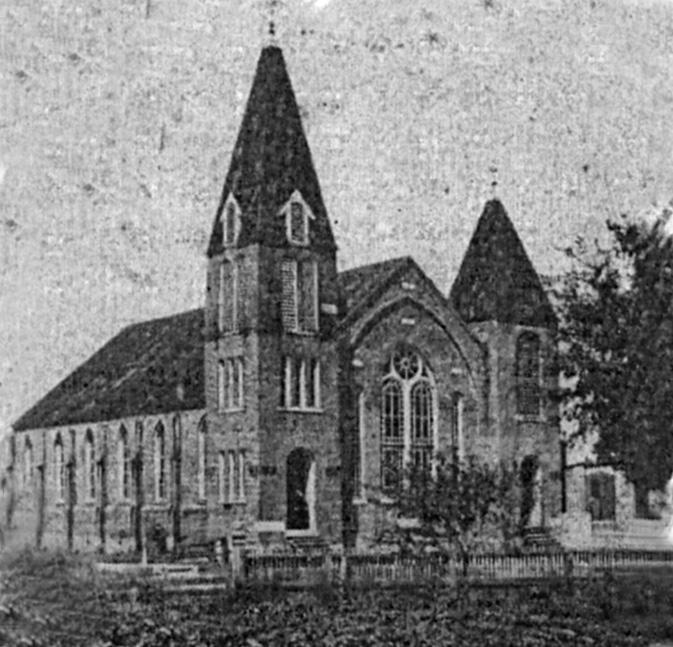 The first brick White Rock Church, from "End of An Era" by Dorothy Phelps

Raleigh Minister Augustus Shepard, father of Dr. James E. Shepard and Dr. Charles Shepard, became the eighth pastor of church, serving from 1901 until his death in 1911. In 1910, the church was remodeled and a wing called the Baraca Room added to the Mobile Avenue side of the sanctuary. This annex provided seating capacity for 250. In the basement, a kitchen and classrooms were added. The North Wall of the main sanctuary was removed, expanding the seating capacity to 800, including the balcony. In 1911, the renovation was completed, with a new church facade, a library, public baths, an elevated floor in the main sanctuary, and the installation of a pipe organ, at a cost of $20,000 to $26,000. 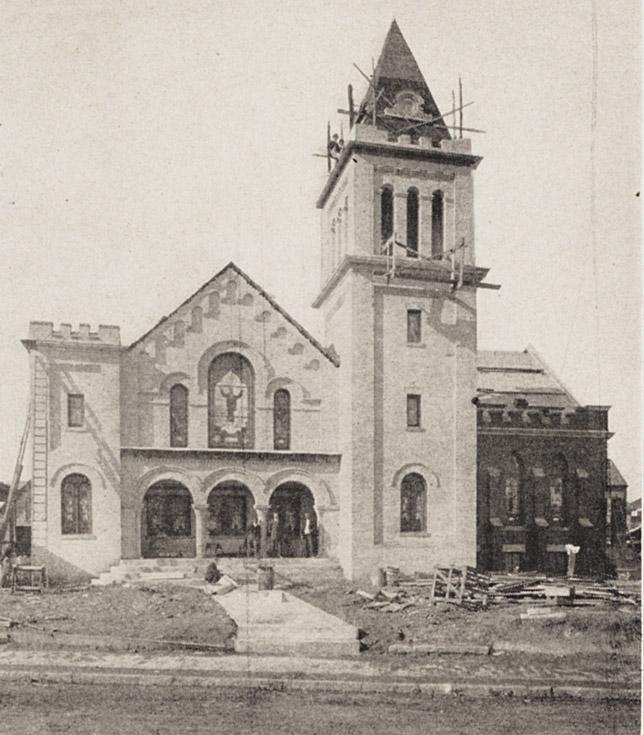 Durham’s first African-American doctor, Dr. Aaron M. Moore, gave property to the church for a future Sunday school building. In 1913, he established a library in the church basement, which in 1916 moved to the corner of East Pettigrew and Fayetteville St., becoming the "Durham Colored Library" - the forerunner of what is now Stanford L. Warren Public Library.

From 1913 to 1919, Dr. E. M. Brawley served as the ninth pastor. Dr. James Kirkland of Darlington, SC became the tenth pastor and served 1919-1924. Among his achievements were the replacement of the original pipe organ and the construction of a modern parsonage at 1219 Fayetteville Street. 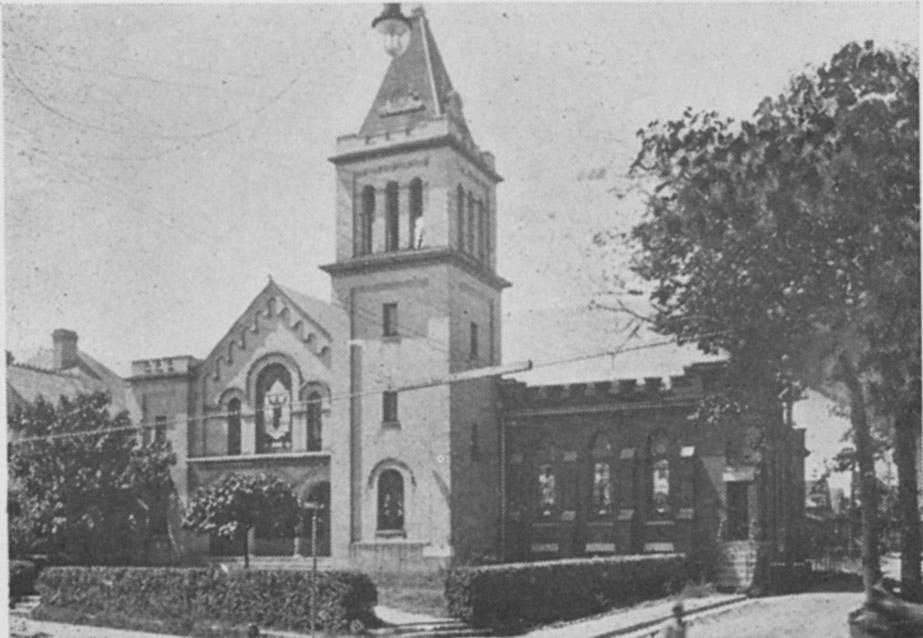 White Rock, 1922
(From "Milestones Along the Color Line" - scanned by Digital Durham) 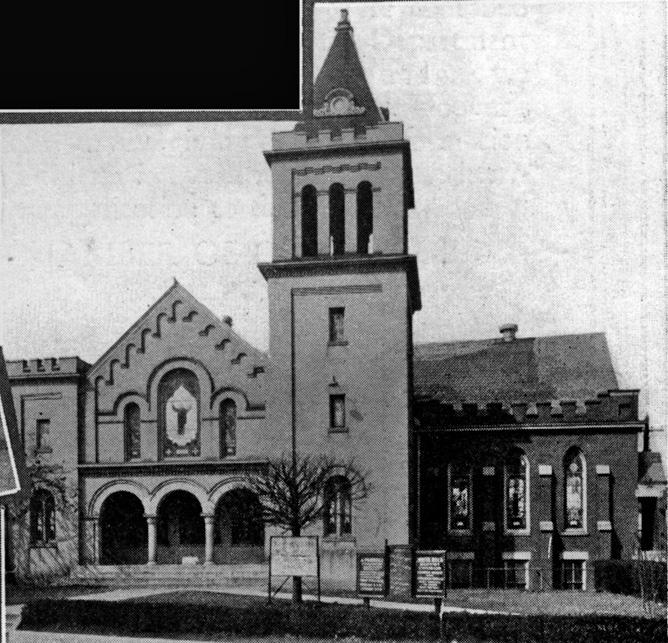 Dr. Miles Mark Fisher became White Rock’s thirteenth pastor on January 1, 1933, having come from the 16th Street Baptist Church in Huntington, West Virginia following receipt of Master's and PhD degrees from the University of Chicago. Dr. Fisher brought a new sensibility to the pastorate of White Rock and, per Anderson, unseated much of the the staid and conservative NC Mutual leadership that had dominated the church for many years. He created an afternoon supervised play program for children of the community. During his years, the church sponsored a nursery school for children of low-income families (1939-1942), a health clinic, and a training program for early African-American employees of the city Recreation Department. The first African-American Boy Scout troop in Durham, Troop 55 was invited to White Rock in 1935 when they had no meeting place. Cub Pack 55 was organized in 1944, the Explorer Post in 1954, and the Girl Scouts in 1951. He made the church available for Tobacco Labor Unions, he created softball leagues; Judge Mamie Dowd Walker was quoted as saying that Fisher's programs had done "more than anything else to decrease juvenile delinquency...in the community." 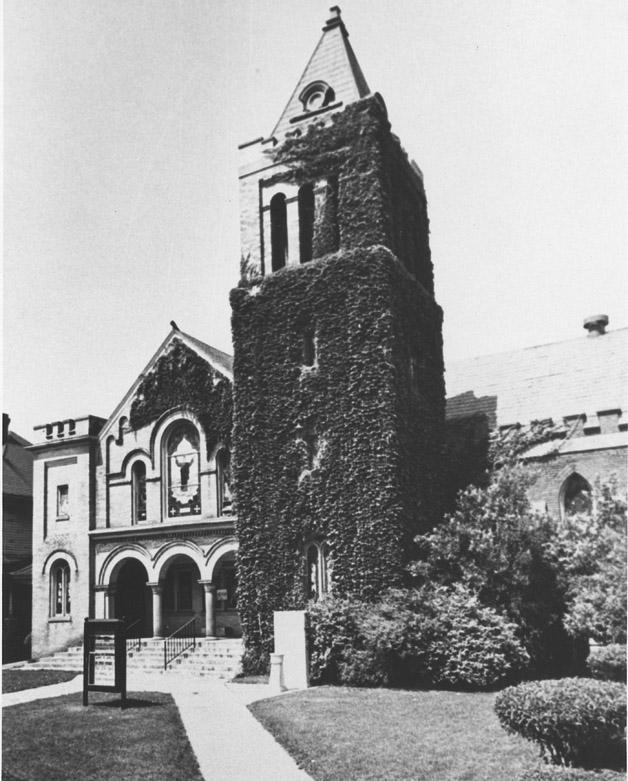 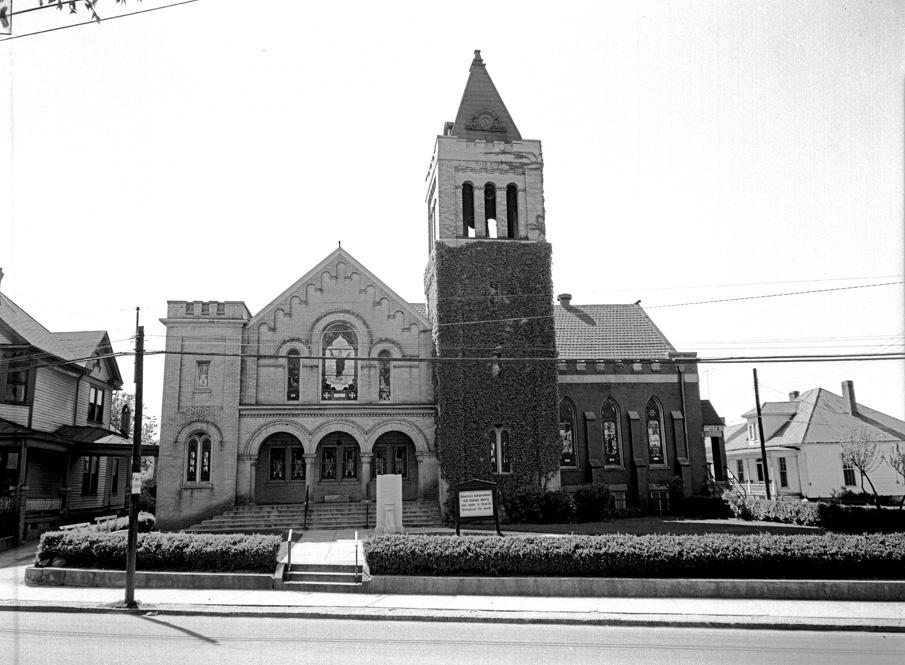 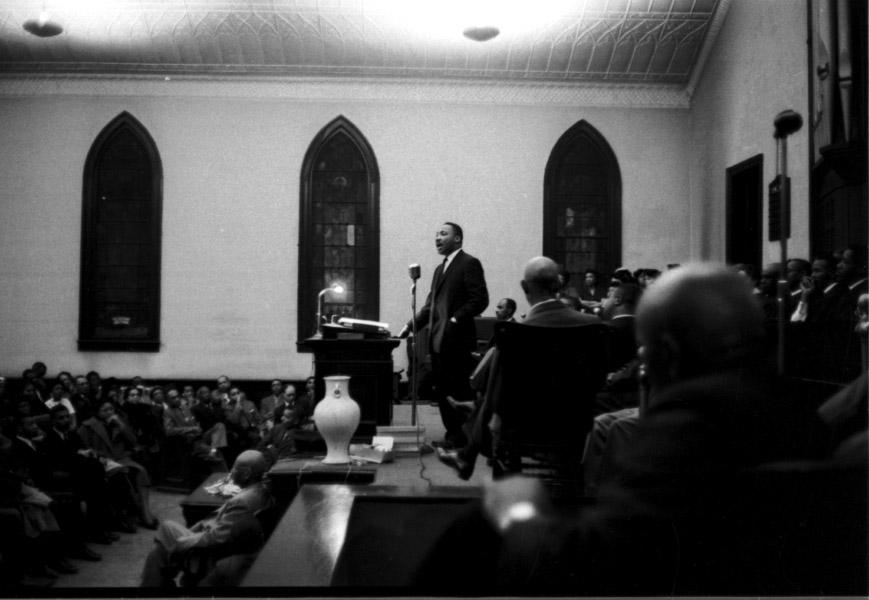 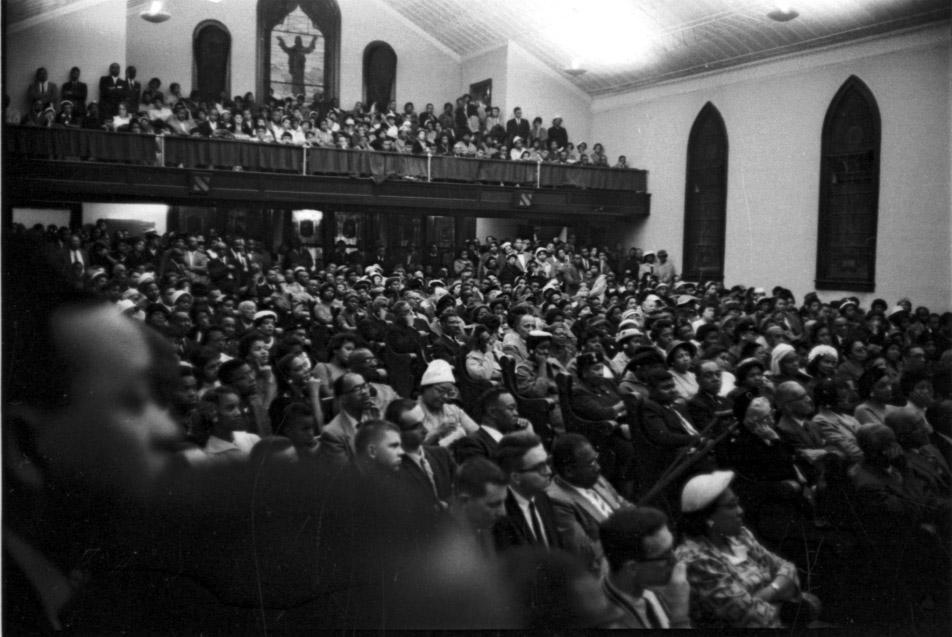 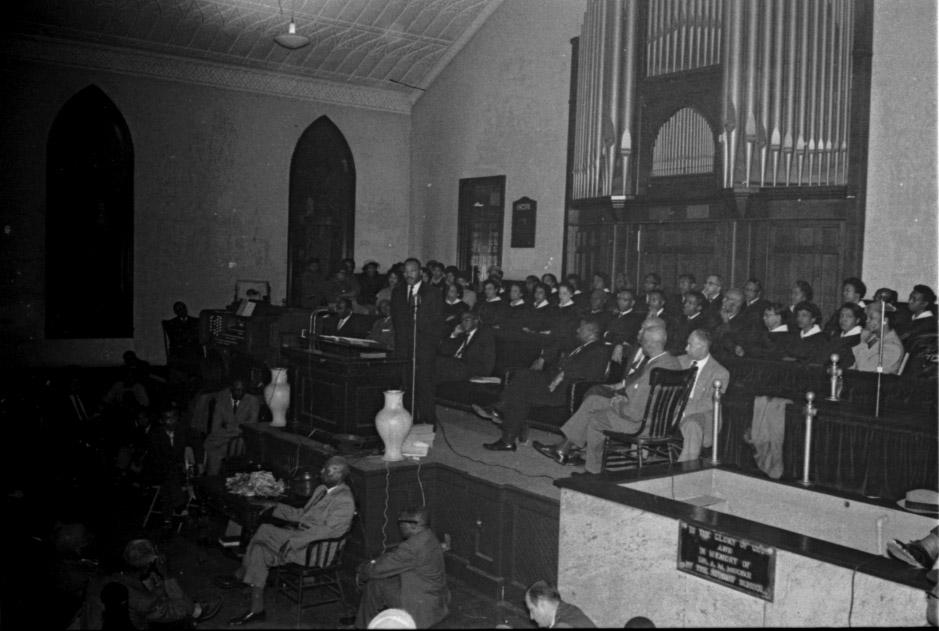 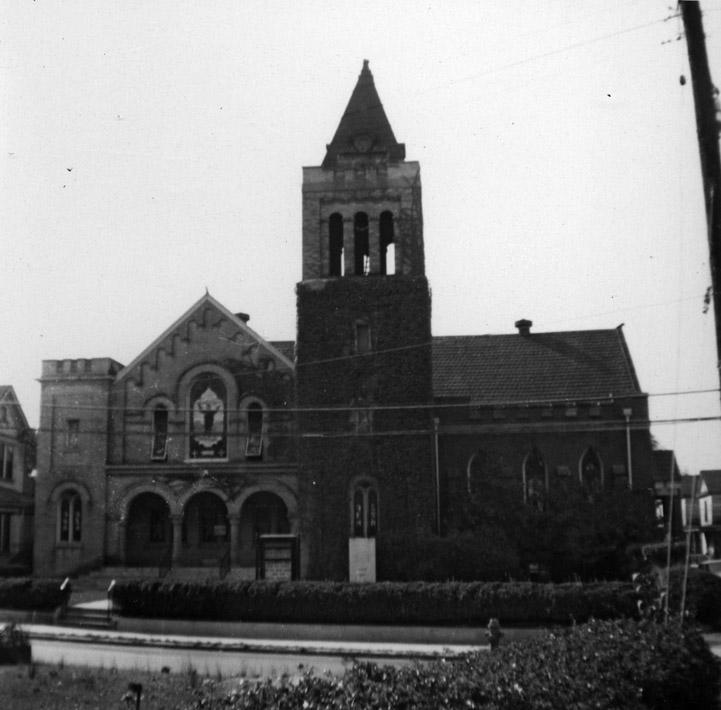 When it became clear that White Rock would be demolished by urban renewal and stood near the path of the Durham Freeway, Lynch helmed the planning, fund-raising, and construction of the new church building, located at 3400 Fayetteville Street, on a six-acre tract of land at a cost of more than one $1 million. Looking east over the freeway crossing over S. Roxboro, 09.12.67. White Rock is still visible at the edge of the freeway clearance in the distance.
(Courtesy The Herald-Sun Newspaper)

Below, White Rock and Dr. Aaron Moore's house, with the Freeway encroaching. This is the only color picture I've ever seen of the church. 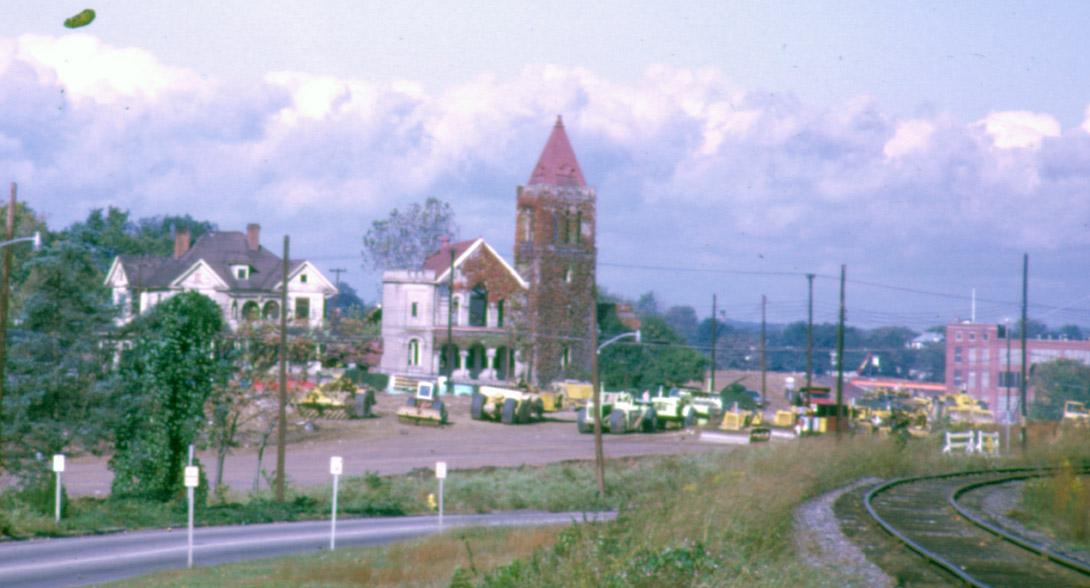 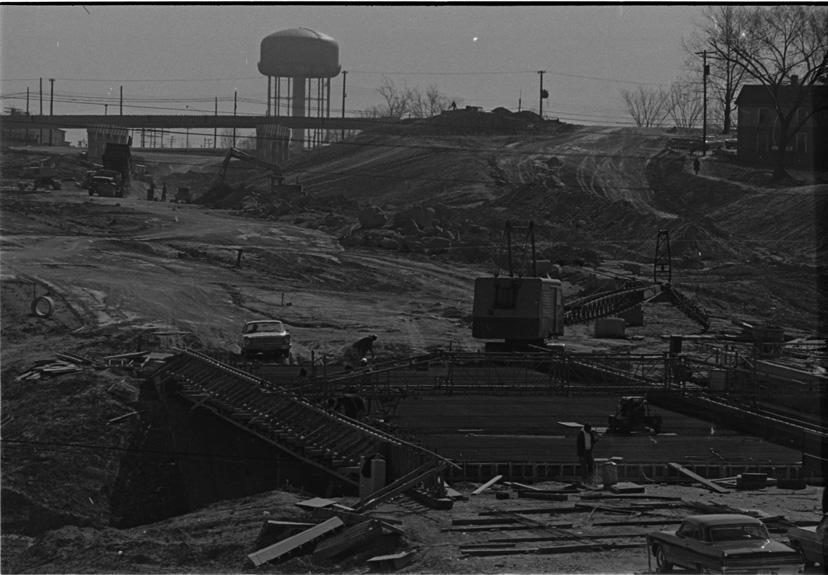 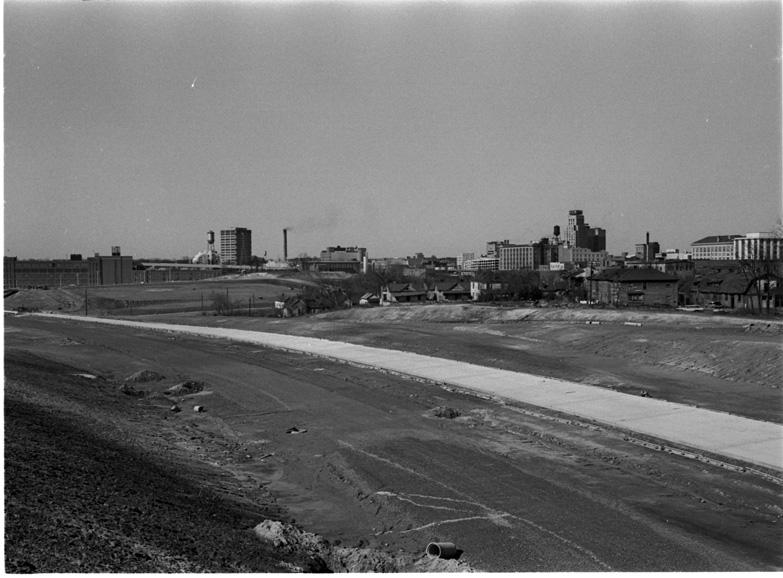 Looking west from near the site of White Rock, 02.07.69.
(Courtesy The Herald-Sun Newspaper) 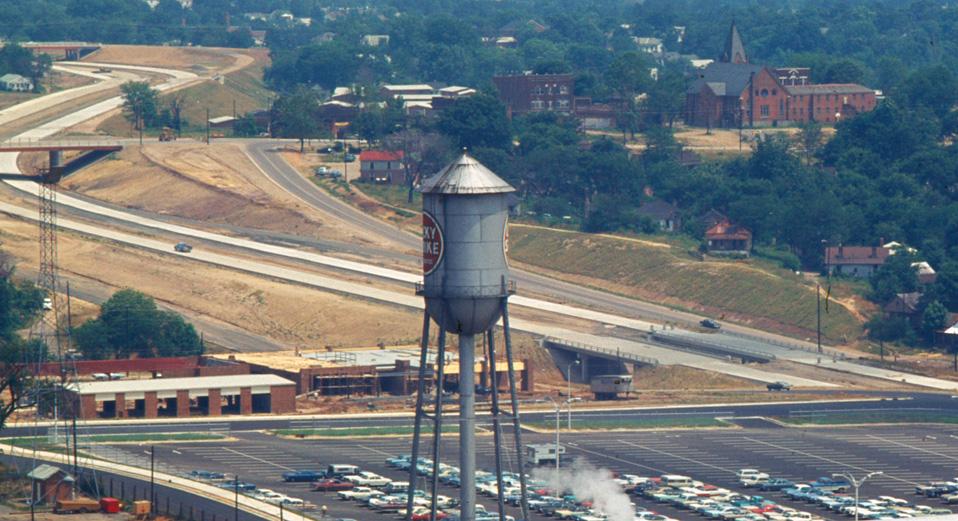 Looking east from the NC Mutual building at the Fayetteville/Freeway intersection ~1970.
(Courtesy The Herald-Sun Newspaper)

While the building was under construction, the congregation worshipped at B. N. Duke Auditorium, on the campus of North Carolina Central University and at St. Joseph’s A. M. E. Church. The congregation occupied the new church on October 10, 1971. [This post relies heavily on church history from the White Rock Baptist Church website]

The former site of the church would sit atop the present-day eastbound on-ramp to the Durham Freeway. 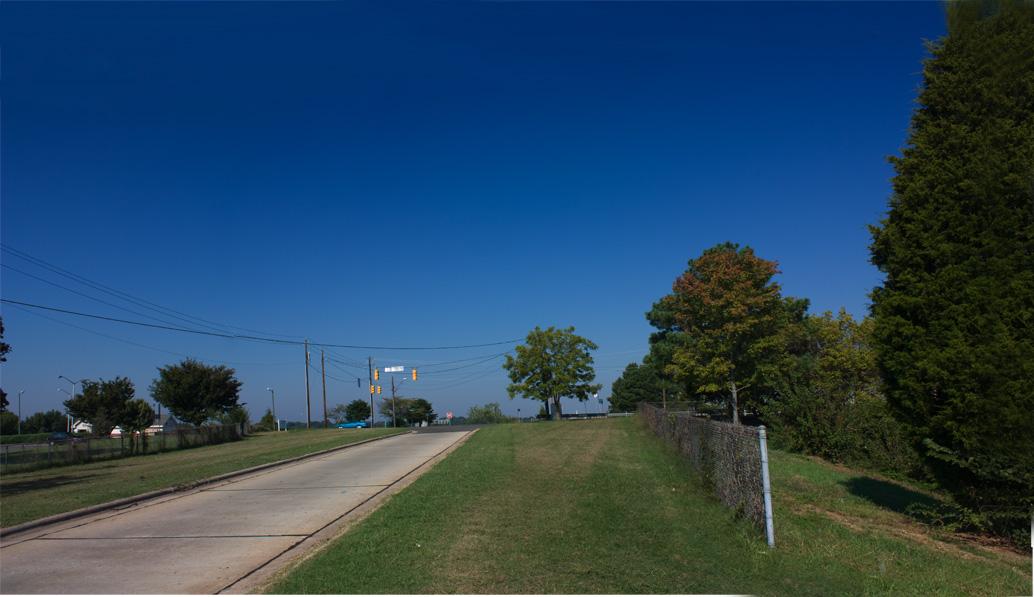 Preservation Durham offers free walking tours, leaving from the Farmers' Market on Foster Street, on Saturdays at 10am from April through November. On the 2nd Saturday of each month a tour guide presents the Civil Rights Legacy walking tour. This tour was first offered on November 17, 2002 and since then thousands of Durhamites and visitors alike...
Read More
Related People 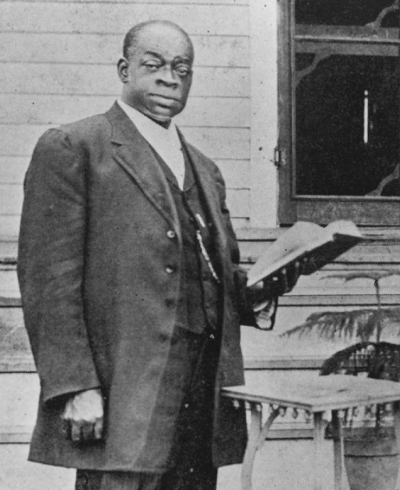 A few weeks ago I asked longtime White Rock church pillar, R Kelly Bryant, about the deconstruction of the building.

He said that very few of the materials from the church were reused in the newer one down the street. One item that was saved was the stained glass window of Jesus, although Kelly told me they gave the (white-faced) Savior a more colorful tan before they put Him back up.

Linthicum & Linthicum list this in a 1909 Manufacturers Record as one of theirs - I wonder if they did the plans for the remodel and new wing?