Preservation Durham offers free walking tours, leaving from the Farmers' Market on Foster Street, on Saturdays at 10am from April through November.

On the 2nd Saturday of each month a tour guide presents the Civil Rights Legacy walking tour.  This tour was first offered on November 17, 2002 and since then thousands of Durhamites and visitors alike have learned about the history of civil rights in Durham.

The tour gives voice to the rich stories of people, who lived through these tumultuous times.  The tour experience include excerpts from:
-oral history interviews with local citizens,
-articles in newspapers and other print material of the time, and the
-retrospective reflections from a 2002 conference sponsored by Preservation Durham.

Including different perspectives aims to dispel stereotypes.  In addition, Preservation Durham invites your comments to this ongoing dialogue about race relations in Durham.

During the 1950s, through the 1970s, Durham witnessed
-Protest marches
-Sit-ins
-Negotiations behind the scenes, and
-Unlikely friendships.

In Durham, four waves of protest activities stand out:

-June, 1957,
when seven Negroes sat at a whites-only table at the Royal Ice Cream Parlor. They were arrested for trespassing.

-February, 1960,
when Durham students flocked downtown to sit-in at lunch counters, one week after the sit-ins in Greensboro.

-May, 1963,
during three days of mass demonstrations, protesters crowded downtown - marching, picketing, and boycotting the businesses and restaurants that were still segregated.

-April, 1968,
when the assassination of Martin Luther King set off three different responses in Durham:
1- Arson, police patrols and curfews.
2- A silent vigil by students at Duke University, and
3- the Black Solidarity Committee’s Boycott of downtown businesses, for seven months, from July to February, the selective buying boycott resulted in business losses of nearly a million dollars in sales.  The Black community was steadfastly organized for change.

The story of Durham’s schools spans the entire period, with court-ordered desegregation in 1970 and a community forum the next summer.

The tour concludes with the bittersweet memories of Durham participants.

Durham’s story is dynamic -- considerably different from the deep South and even unique within North Carolina.

The following Open Durham entries reflect stops along the tour route, or are locations within Durham referred to by the Preservation Durham tour guide. 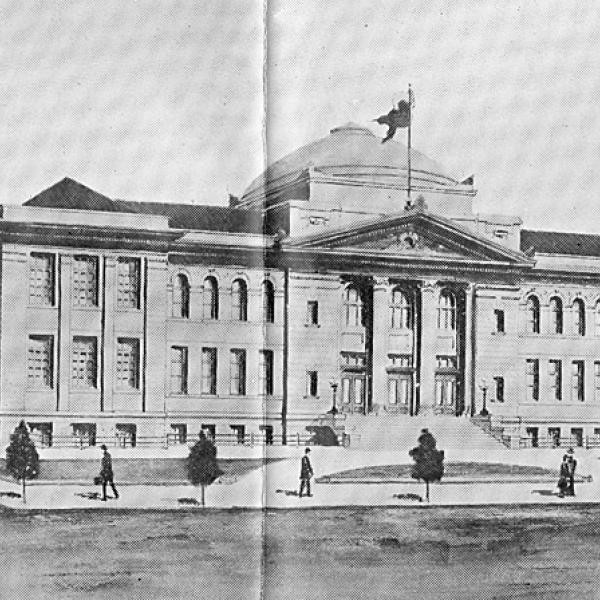 The first public high school in the city, this building was altered significantly to become Durham's City Hall in the 1920s, and then again to become a home for the Durham Arts Council in the 1980s. 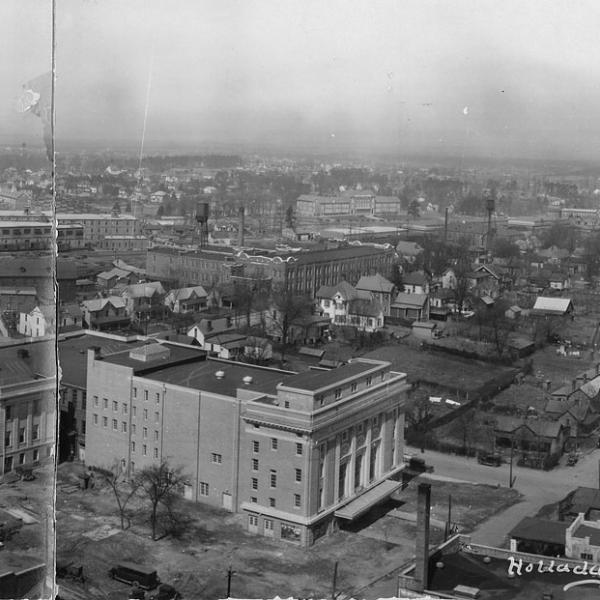 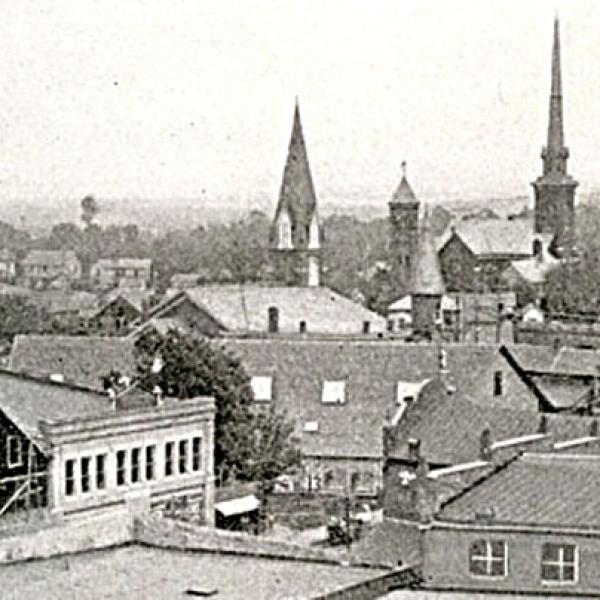 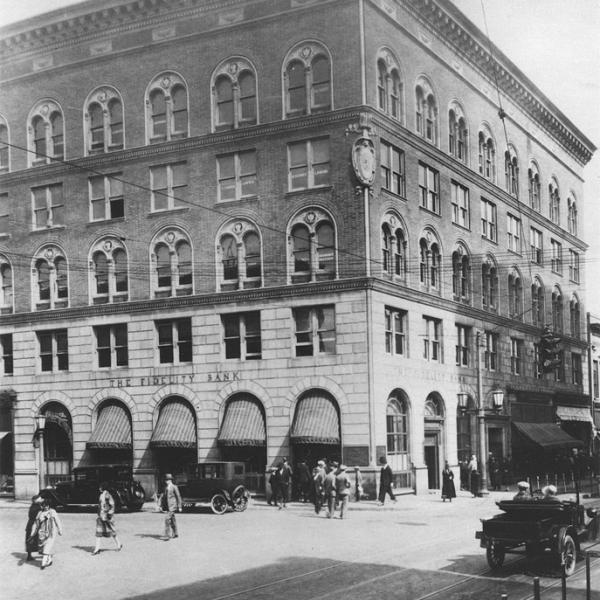 The northeast corner of Main and Corcoran Street has seen its share of building drama. For much of the 20th century, it was the location of one of the buildings on my Top Five list of How-Could-They-Have-Torn-That-Down buidings in Durham: the Geer building. 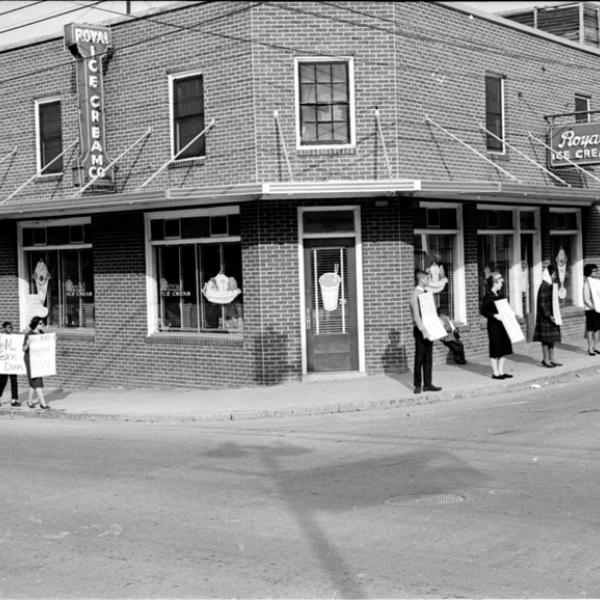 The Union Missionary Baptist church has destroyed an important piece of African-American history by destroying the former Royal Ice Cream Parlor, the site of very early sit-ins, even before Greensboro. Back in the 1950s, this building was the Royal Ice Cream parlor, a segregated business. From a timeline sent to me: 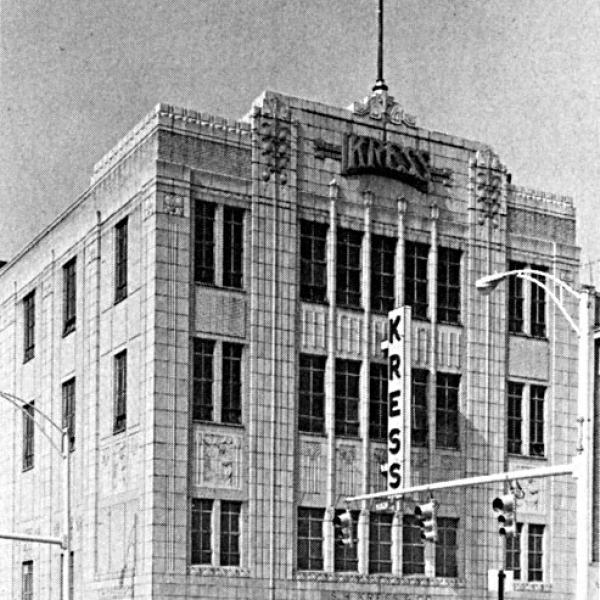 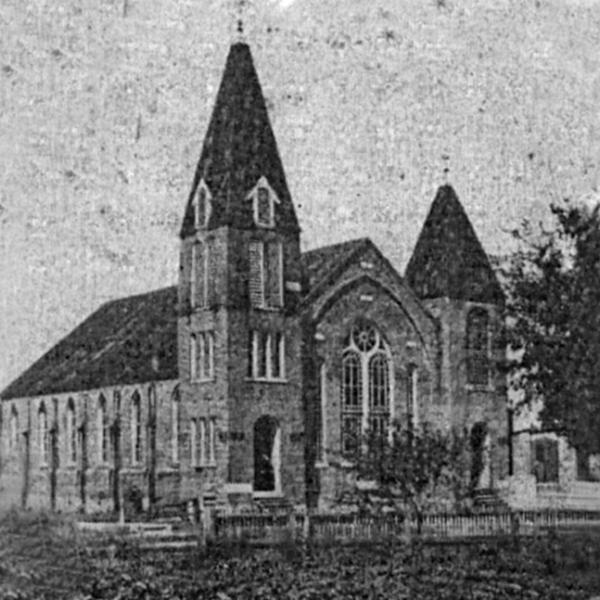 White Rock Baptist Church figures in the earliest origins of Hayti, organized in 1866 in the home of Mrs. Margaret Faucette, following a series of house-to-house prayer meetings. These meetings became services conducted by the Reverend Zuck Horton. Following his pastorate, Reverend Samuel Hunt, the second pastor, held services for what was then... 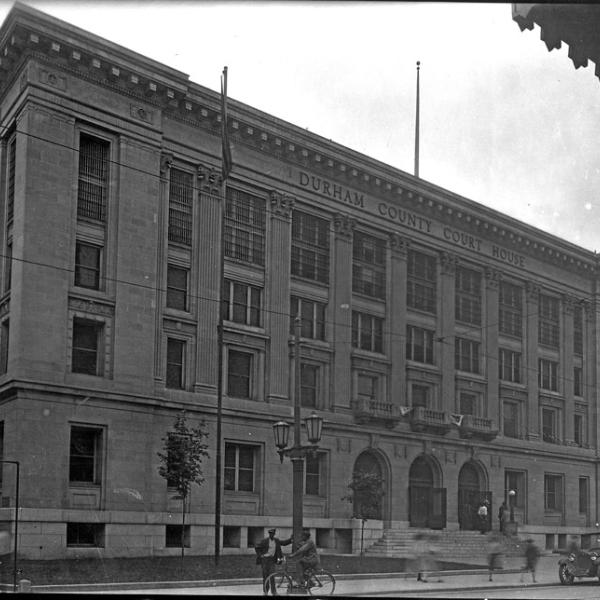 Looking southwest, ~1920. (Courtesy Duke Archives). After Durham County was established by vote of the state legislature in 1881, the first courthouse (and everything else related to the business of the new county) was located in rented space in Stokes Hall, on the northeast corner of Corcoran and West Main St. 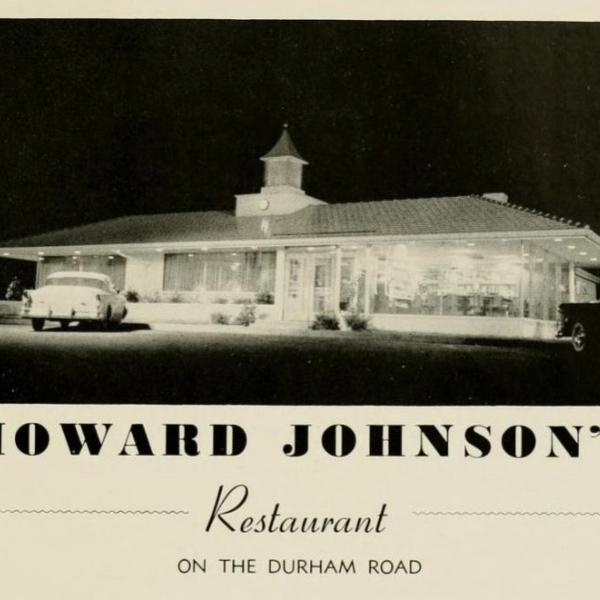 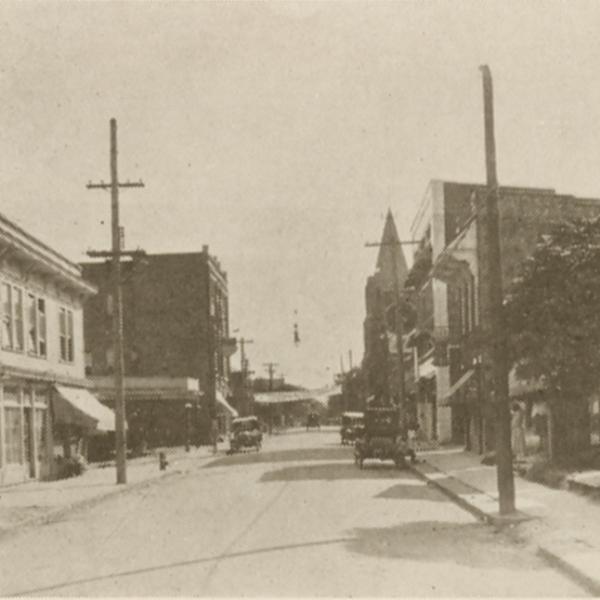 The spire of St. Joseph's visible ~2 blocks away on the right, 1922. (Courtesy Duke Rare Book and Manuscript Collection. Scanned by Digital Durham) 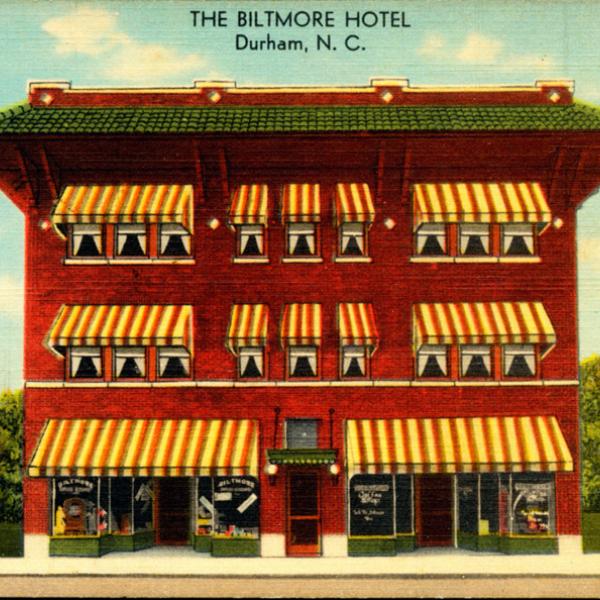 Looking southeast at the Regal Theater and the Biltmore, 1946 (Courtesy The Herald-Sun Newspaper) Although Dorothy Phelps' book opines the the Biltmore Hotel was built in 1923 by Dr. Clyde Donnell, it seems likely, based on the city directories, that the hotel was built in ~1929. Dr. Donnell's 1951 biography makes copious mention of his various... 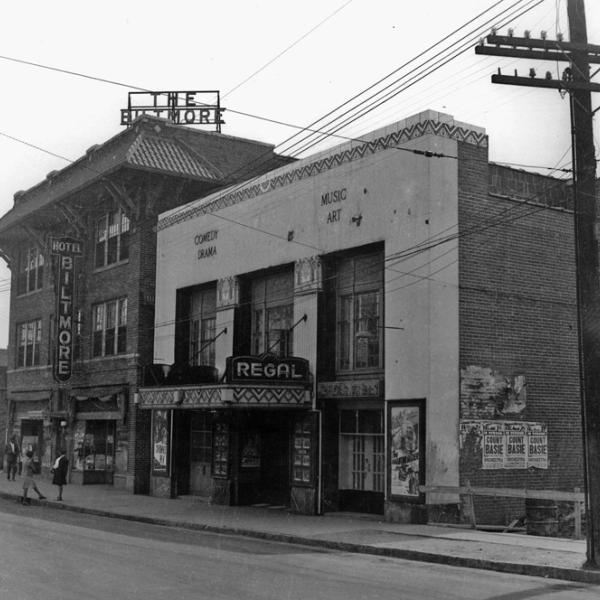 Regal Theater, late 1930s or early 1940s. (Courtesy The Herald-Sun Newspaper) The Regal Theater was built in 1927 by George Washington Logan - providing a variety of entertainment, including musical performances by the likes of Cab Calloway, Fats Waller, Count Basie, Duke Ellington, and others. By the 1930s, it seems that the theater had become... 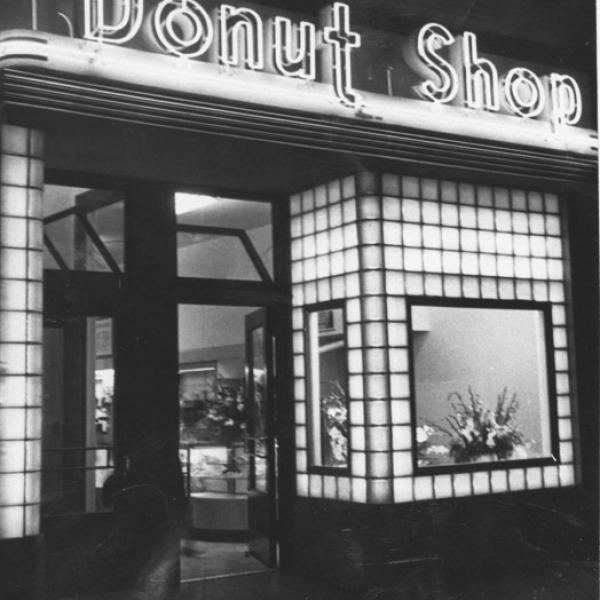 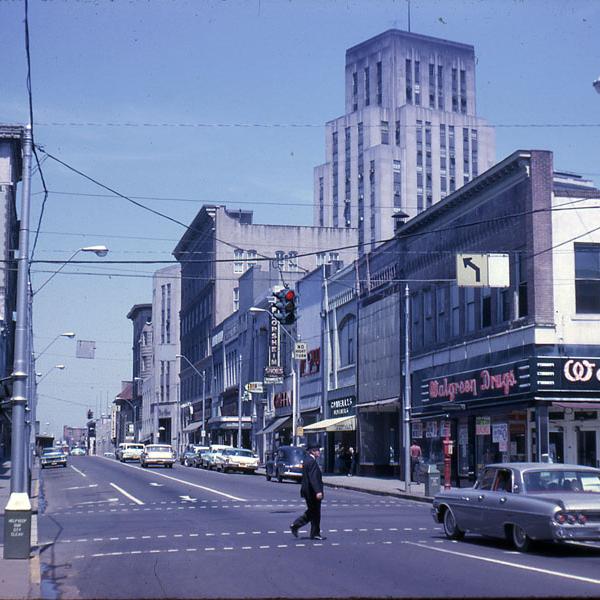 The intersection of Main St. and Mangum St. could be considered the center of Durham. Except for the rather odd Chapel Hill St., Main St. forms the dividing line between "North" and "South" streets, and Mangum St. the dividing line between "East" and "West" streets. It is at this intersection that Durham as a mercantile entity began, perhaps before... 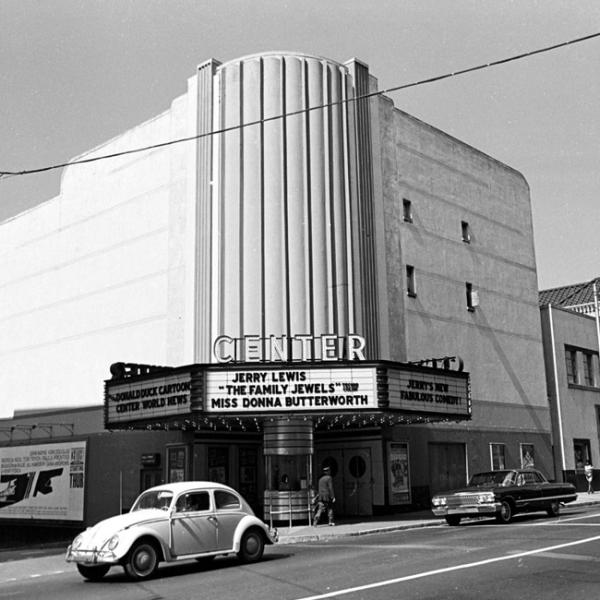 The Center Theater replaced half of an earlier structure, which half was replaced again 29 years later - moving from Mansard to Modern to Launch Vehicle. The building at 313-315 East Chapel Hill Street was constructed around 1907 as the Corcoran Hotel, but did not survive for long due to stiff competition from the other downtown hotels. It became... 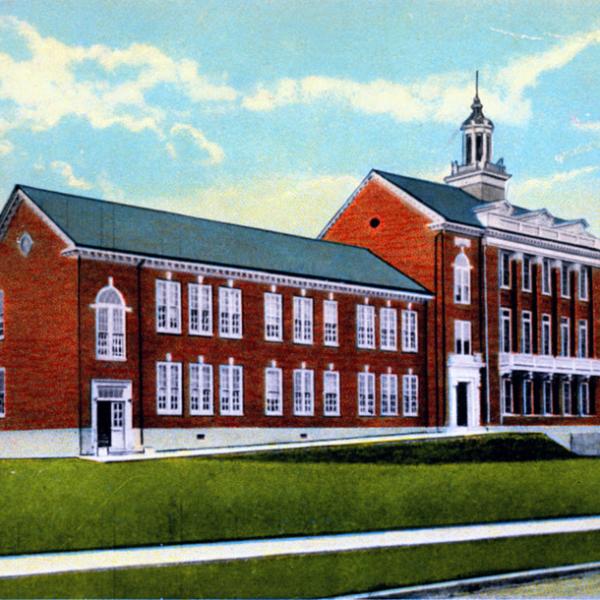 Durham High School --- Brodie Duke's house, 1883. (Courtesy Durham County Library / North Carolina Collection) Brodie Duke, the eldest of Washington Duke's children, was the first of the Duke clan to recognize the potential of Durham in expanding tobacco production and transport. Brodie was born in 1846, the second child of Washington Duke and Mary...