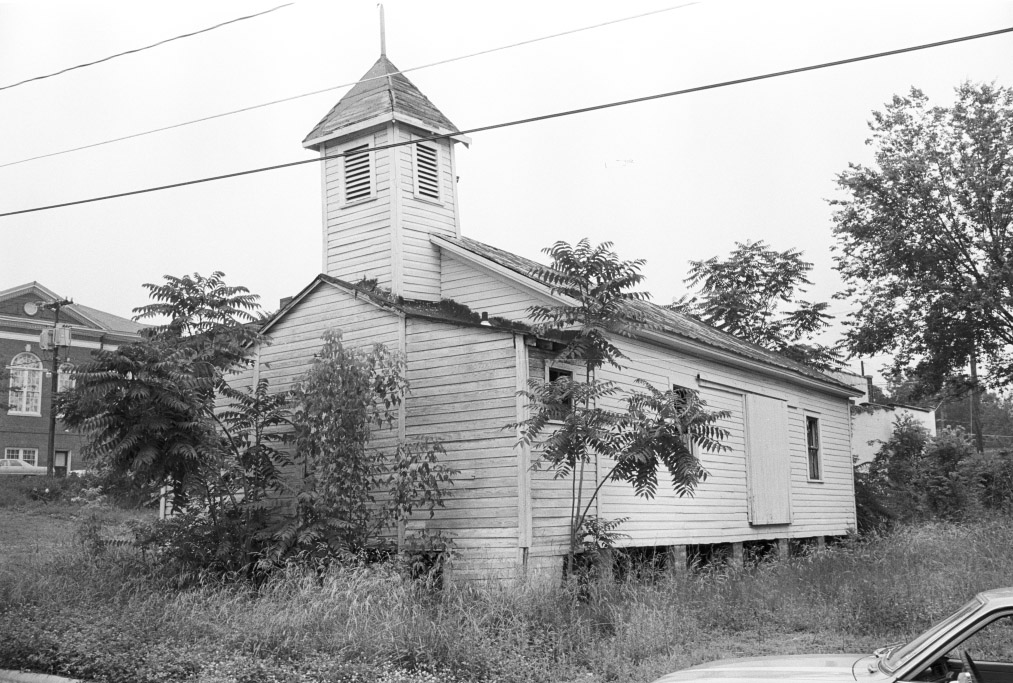 "The Lord House" at 1004 Morning Glory started life as the Free Will Baptist Church, first listed in the Durham city directory at this address in 1919, with a Reverend Zebulon V. Ferrell as pastor.  It is unclear if this building was built specifically as a house of worship or adapted from the structure first shown on Sanborn Fire Insurance maps at this location - apparently a short-lived mattress factory operation.

Compiled from fragments of Sanborn Fire Insurance Maps, available online through Library of Congress and NCLive.org (the top of each image is roughly west).

For most of twenty years from the early 1920s into the 1940s, the congregation seems to have been led by a Rev. Thomas C. Marks, who lived on nearby Elm Street and Alston Avenue with his wife Alice.  Marks was also frequently attributed a side job as a shoe repairman in a shop on Angier Avenue.

While there are many African American congregations of the Free Will Baptist Church, all indications from the city directories (which used various unsubtle ways of signaling the race of institutions and individuals until 1951) suggest this was a predominantly white church - much like the surrounding mill communities of Edgemont and Morning Glory through the mid 20th century.

After the death of Reverend Marks, 1004 Morning Glory changed names to become The Church of God from the mid 1940s into the early 1960s. 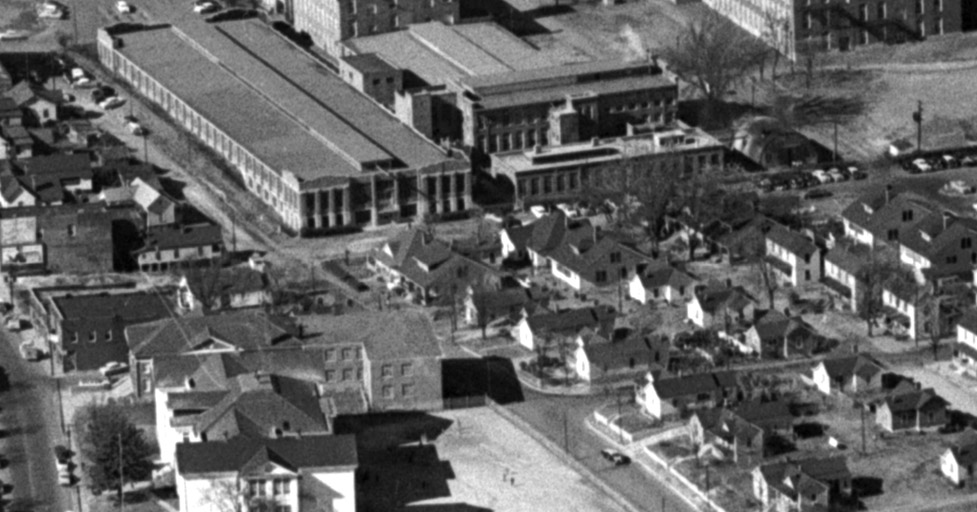 Aerial looking east, late 1950s. A steeple is evident atop the small church.

Charlie Gibbs once related to me that he and his friends would sneak away and around the block from the square dances held on the second floor of 952 East Main Street to hear the rockin' music emanating from the Baptist Church, which they much preferred. 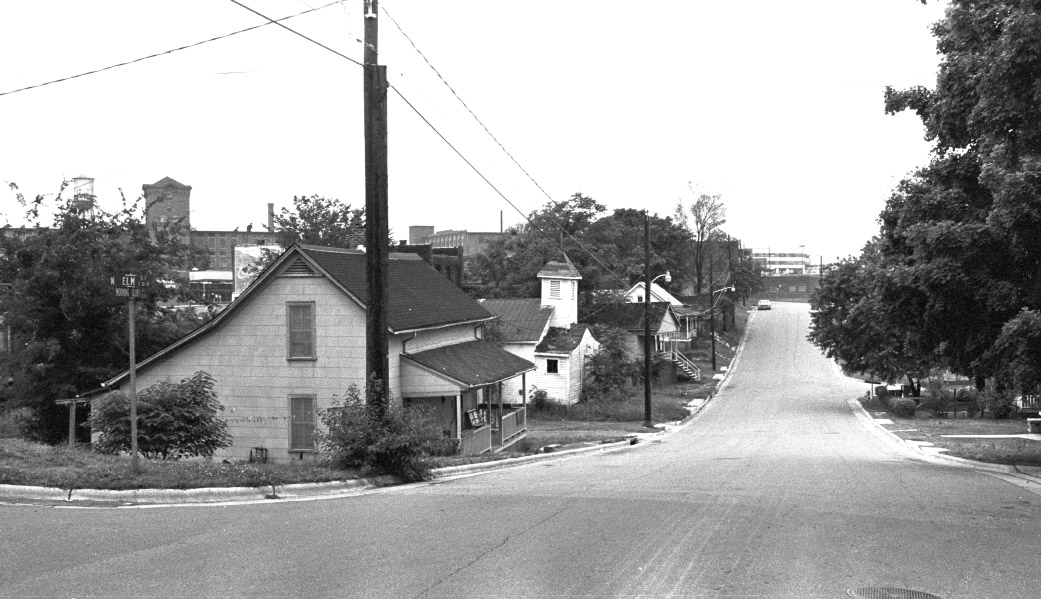 Reflecting change in the surrounding neighborhood as the long decline of once booming industry coincided with white flight to the suburbs, the church at 1004 Morning Glory became predominantly black in subsequent decades.

From 1964 until 1995, the property belonged to the Jones family, who were either themselves involved with or leased the building to a Gospel Light Holy Church from at least the mid-1980s.  That congregation would eventually purchase the building and retain ownership until late 2011.

In 1984, the church lost its original steeple and was encased in concrete block. 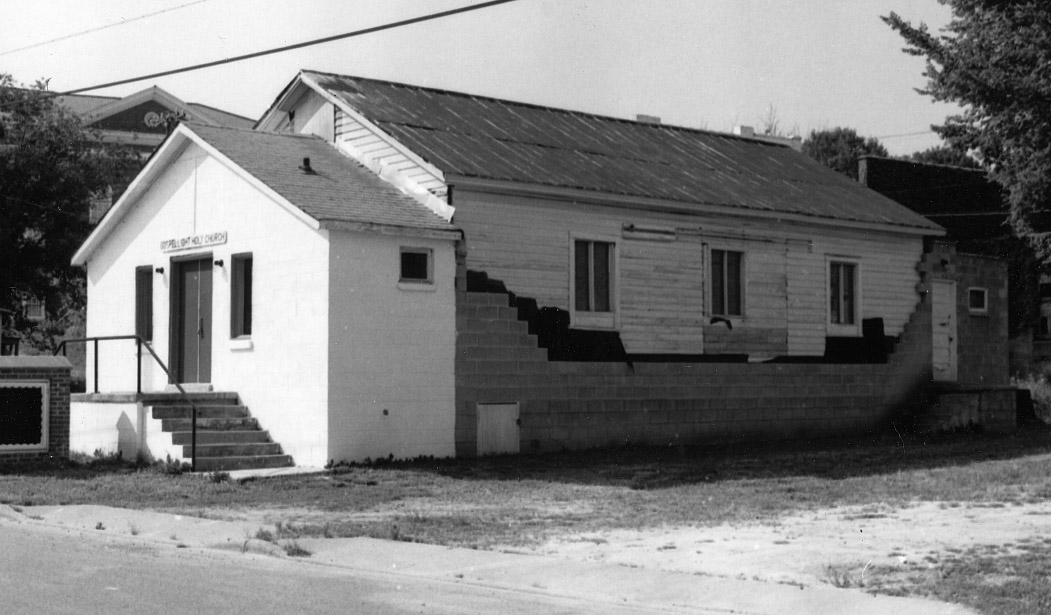 The church continued to house an active congregation through 2012. 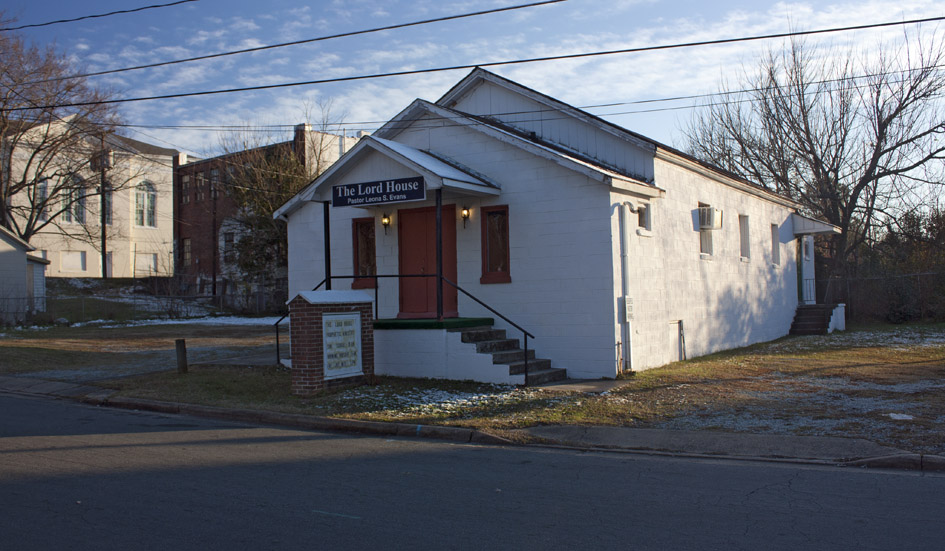 As of late 2012, the building is under renovation by a new owner, who, via secondhand sources, intends to build off the success of Golden Belt by building additional artist studio space for the area.

That space opened in 2013 as SPECTRE Arts, run by Alicia Lange. 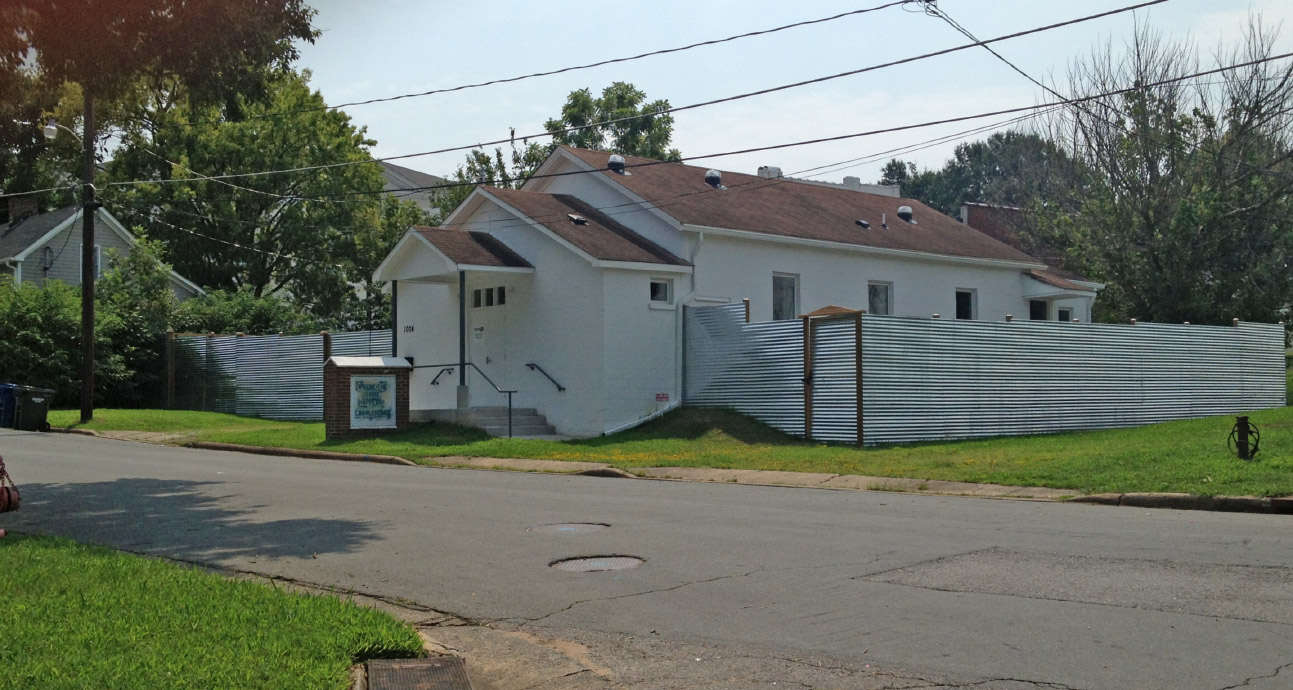 In five years of operation, Spectre Arts hosted a wide range of exhibitions, performances, and special events.  The exterior space was used and decorated extensively, connecting through a rear entrance to 947 East Main, which became The Carrack gallery and studios in 2016. 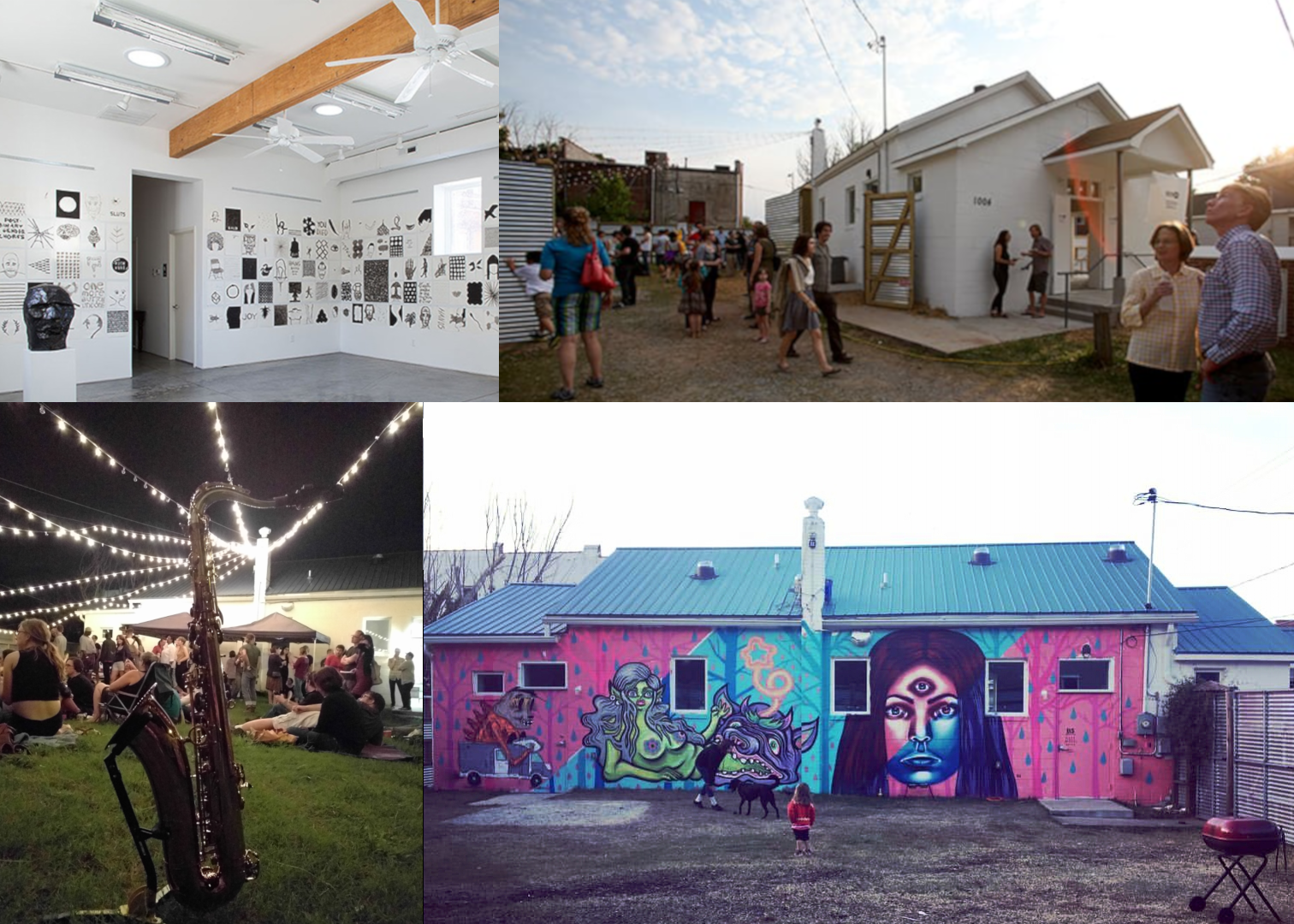 A year after Spectre Arts closed in 2018, the space was reopened in the summer of 2019 as Nolia: Family + Coffee. 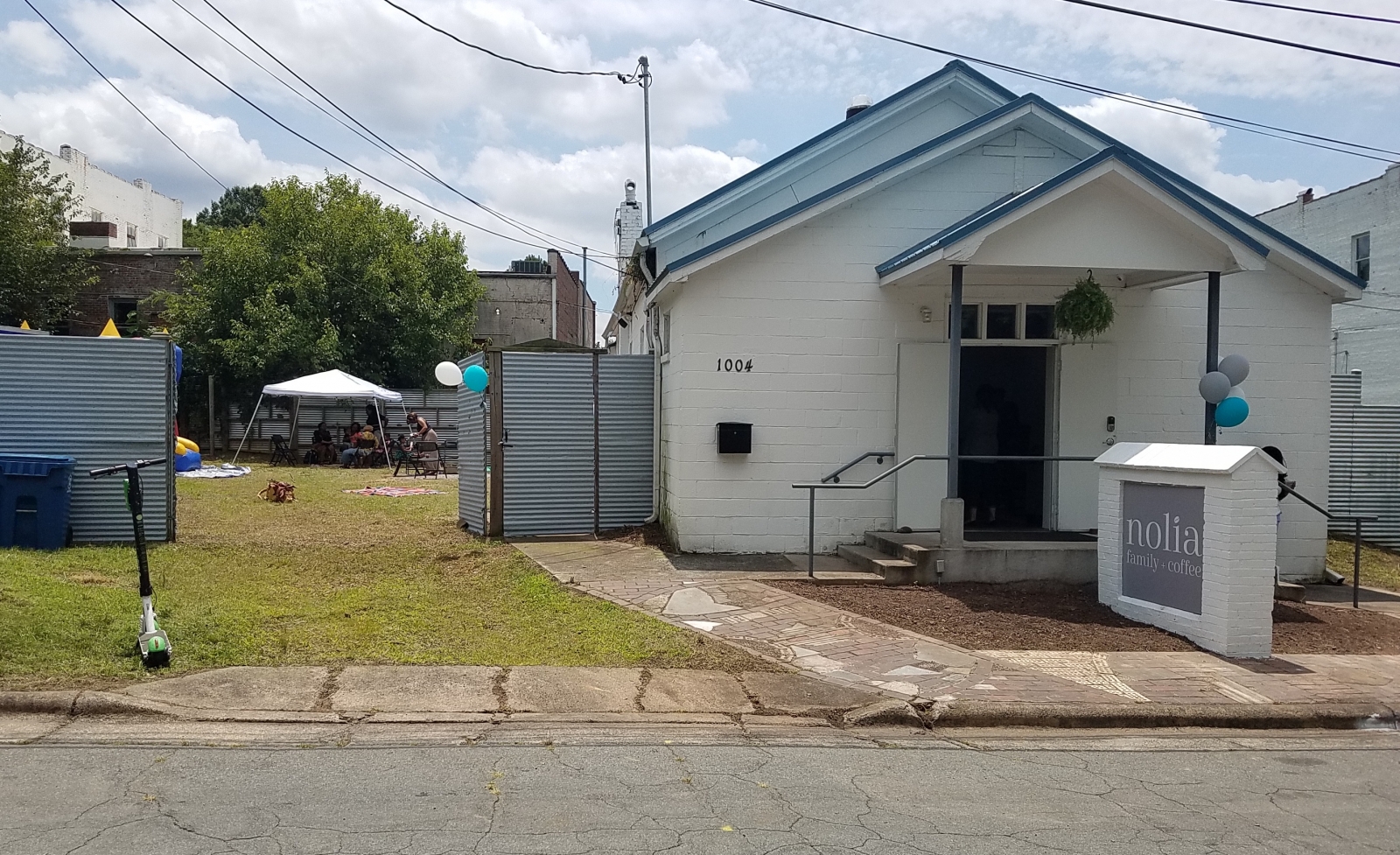 If someone could do a

Does inclusion in this blog

Does inclusion in this blog imply that there is historical significance to this structure? It's one of the least appealing churches in town (slightly better than "House of Refuge" though!)

@ Anon #1 and Anon #2: Lighten up. You were expecting Chartres Cathedral, perhaps? "Historical significance," Anon #1, is not the same as "aesthetic brilliance." The historical significance of this church is that it accurately reflects the material poverty of the people who built it and the place and time in which it was built. Surely this ought to be apparent if you've even barely scanned Gary's entries.

In years past, Edgemont and Morning Glory have been devastated by ruinous government decisions, larcenous non-profits, and egocentrically run charities. But despite the damage, in the last few years, the neighborhood has begun to heal.

I live across the street from this church. The church was vacant for awhile, and the present congregation has only been there for a year or so. They are a small, energetic African-American congregation who have already taken steps to try to improve the appearance of the building by painting it and planting flowers. They have services and other activities almost every day. They are an active and welcome part of a recovering neighborhood.

You want to talk about ugly? Go look at the Health Department building that the county is constructing downtown in a style that is probably best described as "Soviet Moderne." That's the House of Ugly.

Of course I wasn't expecting

Of course I wasn't expecting Chartres cathedral in East Durham. I just don't understand why a cinder block building is being written up in this blog. It's a perfect example of urban blight.

The website is about more than how pretty a building is, although that is a component of what I'm presenting. It's also about the history of Durham, the small and large institutions - commercial, religious, civic, etc. - that have provided a continuity of what 'is' Durham over time, and the people that have shaped Durham's history, all told through the lens of the buildings that have housed, supported, or been identified with them. It's about how we lose ties with elements that give Durham's history a richness and depth when we erase these buildings from the landscape; applying a "historical significance" test is in the eye of the beholder. I see a small African-American congregation that built a small church in the early 20th century (similar to many others that once appeared throughout Hayti, the Bottoms, the West End, Brookstown, etc. ) Why here? In the middle of a mostly white mill village? Who were the congregants and where did they live? Did they walk down from the East End? Were there African-American families interspersed among the mostly white denizens of the mill village? Did they work at the factory? When did the factory integrate? Why didn't the church expand when more African-Americans moved to Edgemont and Morning Glory in the 1960s? Did the congregants move to other Baptist churches?......

In short, I find the presence of the church a fascinating opportunity for exploring the evolution of a neighborhood, geographic and industrial racial segregation, poverty, splits between various religious denominations, and yes - the plain architecture (although once adorned by a steeple) of such small, impoverished churches. Was this preceded by a frame church, as most of these churches were? Why was the steeple removed? Why wasn't this long bulldozed as so many of these small churches have been.

I guess ugly really is only

I guess ugly really is only skin deep.The beauty in this building is the memories it represents for me growing up.Sitting on my grandparents porch,with a full stomach, after eating one of my meemaa's great Sunday dinners, listening to the music and the rejoicing coming from inside of this building and watching the well dressed congregation leaving after the services were over.

I lived in the community in

I lived in the community in the early 1950's. I recall this church as a Holiness congregation of caucasian members. My father worked at the GB many years. I have a 1923 picture of the employees and management taken in front of the mill.

Is there a place where that

Is there a place where that photograph of the Mill employees can be seen? My grandparents worked at that mill during that time and would love to be able to identify them if pictured. Thanks.