"Downtown West" is a term I've used to denote the area west of Five Points, including the former W. Duke and Sons / Liggett and Myers factories and surrounding commercial structures. Unlike "Downtown East," this area was always far less residential in nature, and although it saw its share of demolition in the 1960s-1980s, it was spared the mass destruction of Urban Renewal.

While the earliest downtown development was centered around the railroad tracks, Mangum Street, and the Blackwell factory, the Dukes set up shop significantly farther to the west, and soon drew development westward by the gravitational pull of their success.

Washington Duke's eldest son, Brodie L. Duke, was the first member of the family to move from Duke Homestead to manufacture tobacco in Durham. In 1869 he set up his business in a small frame building that he purchased on West Main St. Five years later, his father and two half-brothers followed his example; they moved to town and built a large frame factory, also on West Main St., from which they operated their partnership, W. Duke and Sons. Washington Duke built a two- story frame house for himself immediately west of the building. In 1878, Brodie's factory and the W. Duke and Sons factory were consolidated as W. Duke, Sons and Co. under the five-man partnership of Washington Duke, his three sons, and George W. Watts.

In 1882, after Richard H. Wright replaced the retiring Washington Duke as a partner, W. Duke, Sons and Co. began manufacturing cigarettes as a means of surpassing the competition. Two years later, the company began construction of a new brick cigarette factory on the south side of West Main St., facing the railroad tracks. Designed by William H. Linthicum, it was similar to the Bull Durham factory in size and style. Within a few years, the building was enlarged to cover three entire sides of the block. 4 The build- ing remains standIng, drastically altered by the removal of the top two stories. In 1888, Washington Duke built his palatial Queen Anne style frame house, "Fairview," in the shadow of the new factory. Large wraparound porches, turreted towers, and park-like grounds that included greenhouses highlighted Duke's house. It was razed in ~1919.

The Imperial Tobacco Co. of Great Britain and Ireland, Ltd., organized in 1901 to counter James B. Duke's activities in England, purchased the brick Fallon and Martin Factory on Morris St: in 1908 for their American leaf-buying operation. In 1916, the Imperial Tobacco Co. erected the enormous factory with extensive decorative brickwork that occupies the site today.

City directories and the Sanborn Insurance Maps published in the late 19th and early 20th centuries reveal that the most prolific branch of the tobacco industry, from the standpoint of construction, was warehousing. The first Durham sales warehouse was founded by W. T. Blackwell and Co. in 1871 in a move to gain independence from the Virginia tobacco market. Soon, warehouses associated with local factories, as well as independent warehouses, were being built throughout Durham, providing a convenient market for area tobacco farmers.

Like the tobacco factories, these warehouses began in frame structures and many eventually were replaced with larger brick buildings as more space was required. Until the 20th century, most of the sales warehouses remained in the CBD, but as early as the 1880s, there were several scattered throughout the CBD Frame. The Globe Warehouse, built in the 1880s on W. Main St. (torn down in 1974) near Five Points, exemplified the large sales warehouse erected in the late 19th century. Built in brick, its large one-story sales floor was fronted by a two-story office wing with decorative corbelled cornices and a stepped parapet. Storage warehouses generally were more compact and usually con- sisted of more than one story; an example is the brick Brodie L. Duke Warehouse, built in the late 1870s.

By far, the predominant type of warehouse was the prizehouse, where brokers resorted their tobacco by grade prior to shipping it to the manufacturer. Examination of the Sanborn In- surance Maps beginning with the 1888 series reveals that every tobacco factory had at least one prizehouse, augmented by dozens of independent prizehouses operated by brokerage firms and individual tobacconists, most of whom were also manufacturers. Again, these multi- storied buildings first were of frame construc- tion and later were predominantly brick, with corbelled cornices. Often used for both storage and prizing, prizehouses were about evenly distributed between the CBD and the CBD Frame from the beginning of Durham's tobacco history. Most of the large brokerage houses, however, were in the CBD Frame, where all of the prizehouses eventually were situated. Most of them were concentrated north and west of the CBD. The large brokerage firm of J. T. Pinnix & Co. oper- ated three prizehouses (none survives) near the intersection of Morgan and Foster streets. Several prizehouses in the names of individual tobacconists, including Richard H. Wright and Brodie L. Duke, were clustered near the junction of Morgan and Fuller streets.

West Main St. west of the tobacco factories was primarily residential until the 1920s, but the only surviving indication of this former charac- ter is the frame building at 1105 W. Main St. which has been converted from a house to a shop. This stretch of W. Main St. also was the location of one of Durham's first graded schools; the rambling and elaborately decorated South- ern Conservatory of Music; and the 1886 Main Street Methodist Church which grew out of the Bethany Sunday School, founded by Washing- ton Duke in his factory. All of these buildings were destroyed as these blocks shifted to commercial use. By around 1930, several houses had been replaced with new commercial buildings, including two funeral parlors and the Durham Coca-Cola Bottling Plant. businessmen.

In the breakup of the American Tobacco Trust in 1911, the former W. Duke and Sons factory buildings became the headquarters and plant of the Liggett and Myers Company. Liggett continued to expand the plant northward and westward throughout the 1910s-1930s. Brodie Duke's house and large estate, to the north and west of the factories, became the site for the new city high school (Durham High School) and junior high school in 1924.

Residential areas west of Duke Street, and green space, including a playground in the 800 block of West Main, were increasingly converted to light industrial uses, including Nash, Hudson, Plymouth, Studebaker, and other car dealerships; a similar trend occurred in the blocks of East Main just outside the downtown core. Service stations appeared on multiple corners, including in place of the grand Southern Conservatory of Music. Funeral homes relocated from the downtown core to the 1000 and 1100 blocks of West Main.

The largest change to the area occured with the construction of the six-story 'New Cigarette Factory' on the former site of Washington Duke's Fairview mansion in 1948; the Linthicum-designed cigarette factory was reduced from 4 to 2 stories immediately thereafter, for unclear reasons.

That may have been the peak for the fortunes of Liggett and Myers - the planned eastward expansion of the New Cigarette Factory was never completed (which is why there is an unadorned ~concrete wall on the eastern facade.) Production and employment gradually decreased during the 1960s and 1970s - auto dealers moved farther outward, and commerce generally diminished. However, unlike in the east, Duke students continued to patronize establishments such as the Ivy Room, Mayolas, and the Lewis Cafe.

The second big transformation of the area occurred with the development of Brightleaf Square in 1981-82 by Terry Sanford, Jr. and Clay Hamner. The former Watts and Yuille warehouses of Liggett and Myers had been sold off as surplus; Sanford and Hamner were early adopters of historic tax credits to convert the warehouses into the contemporaneous form of retail development - essentially a shopping mall, cased in Italianate Brick. This immediately buoyed the area, although the razing of structures in the 800 block of West Main for parking created an unfortunate emptiness to the area.

The area immediately surrounding Brightleaf has remained decently vibrant for the 30 years since Brightleaf was redeveloped; the addition of Peabody Place from the Dillon Supply Company and Durham Laundry buildings was a nice addition, and the establishments have transitioned to target less lunchtime and more of a nightlife crowd. But something does seem rather static about the area - perhaps the empty bulk (as of 2012) of the Chesterfield building, the overabundant Brightleaf-controlled surface parking concentrated in the 800 block of West Main, the funereal funeral homes to the west, or the desolation just south of the tracks. 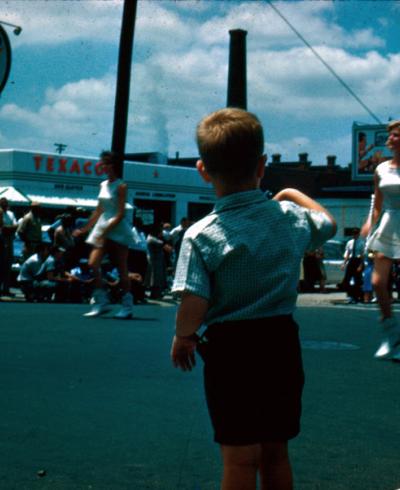 The southwest corner of South Duke and West Main Streets was the location chosen for the Southern Conservatory of Music was built in 1898 - in large part, if not entirely due to the residence of the school's primary patron across the street. Per the great-granddaughter of the founder, Gilmore Ward Bryant, Washington Duke invited 'GW' to Durham to...
Read More 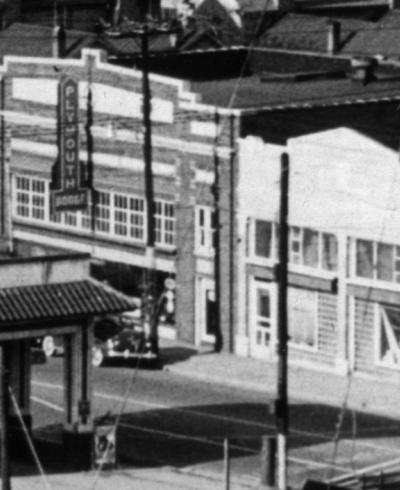 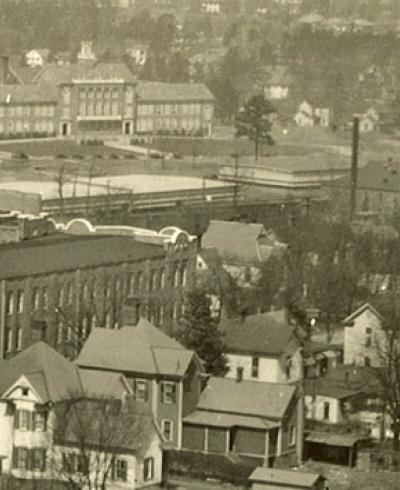 (Courtesy Duke Rare Book and Manuscript Collection / Digital Durham) The louvered sides of the Garrard warehouses, visible along Fuller Street (between the Imperial Tobacco building in the foreground and Durham High in the background.)
Read More 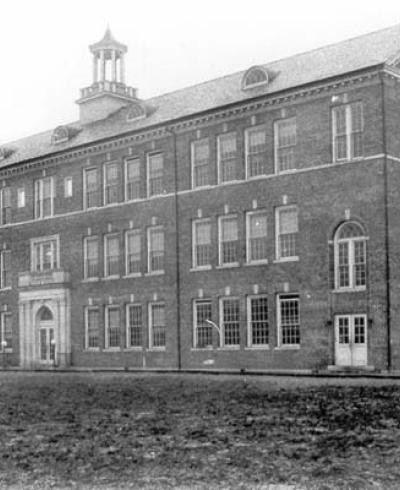 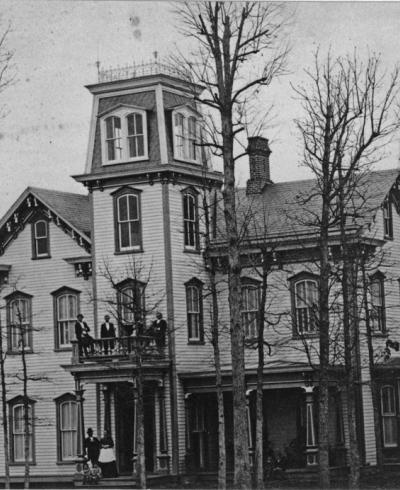 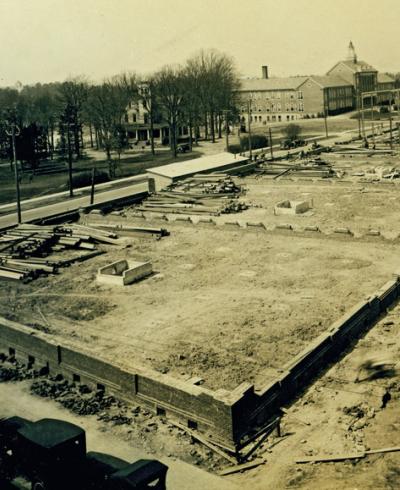 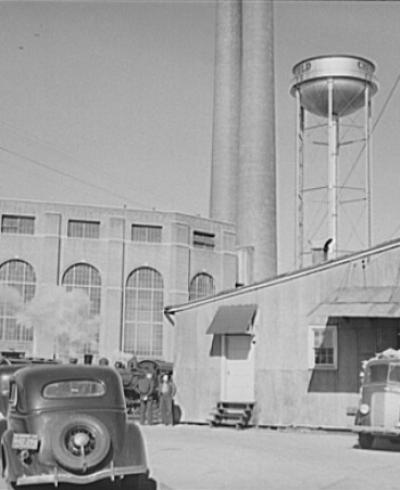 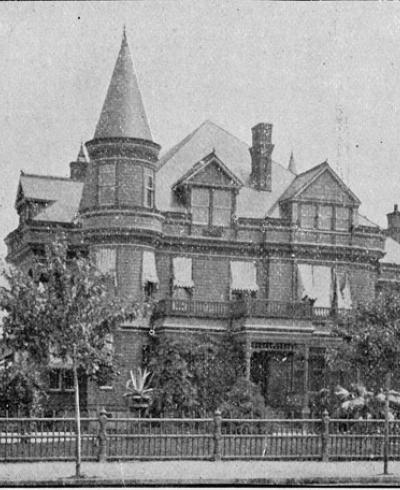 The site just to the west of the first Duke Factory was Washington Duke's first in-town home. (Durham Historic Inventory) In 1884, Duke built a new brick factory, just to the east of his house and original factory. In 1888, he built a new house, which he called Fairview. Looking west, with the old factory building to the right. The steeple of Main...
Read More 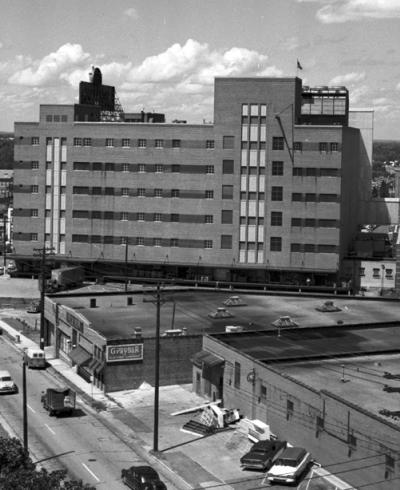 Where the immense Chesterfield Building sits as of 2011 was where Washington Duke made his home and began his in-town tobacco production operation. (Durham Historic Inventory) In 1884, Duke built a new brick factory, just to the east of his house and original factory. In 1888, he built a new house, which he called Fairview. Looking west, with the...
Read More