The 5.6 acre site at Glendale Avenue and Club Boulevard was developed per the architectural design of Marion Ham - among the earliest schools in Durham to exhibit Modern architecture. Ham also designed 1223 Vickers Avenue that same year, and would go on to design the NC Mutual Life Building, built in 1964-5 - an award-winning modern design that was later sullied by the failure of its cantilevered corners.

Per the Club Blvd. website, "the original building cost $300,000 and was the first one-story school in the county. It consisted of the primary wing, which included the media center, the auditorium and the cafeteria." 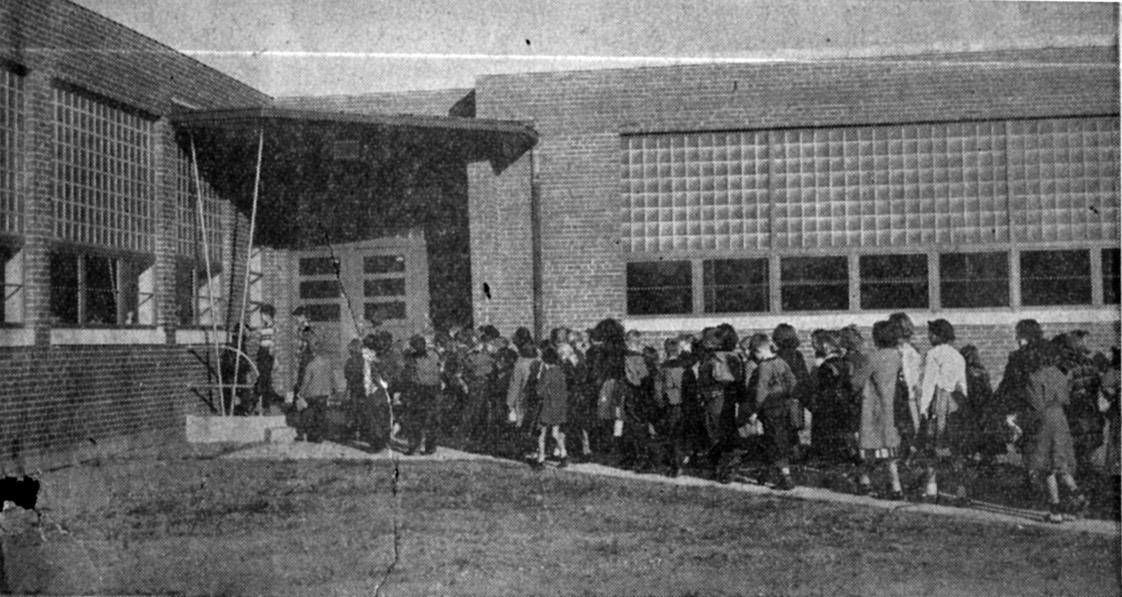 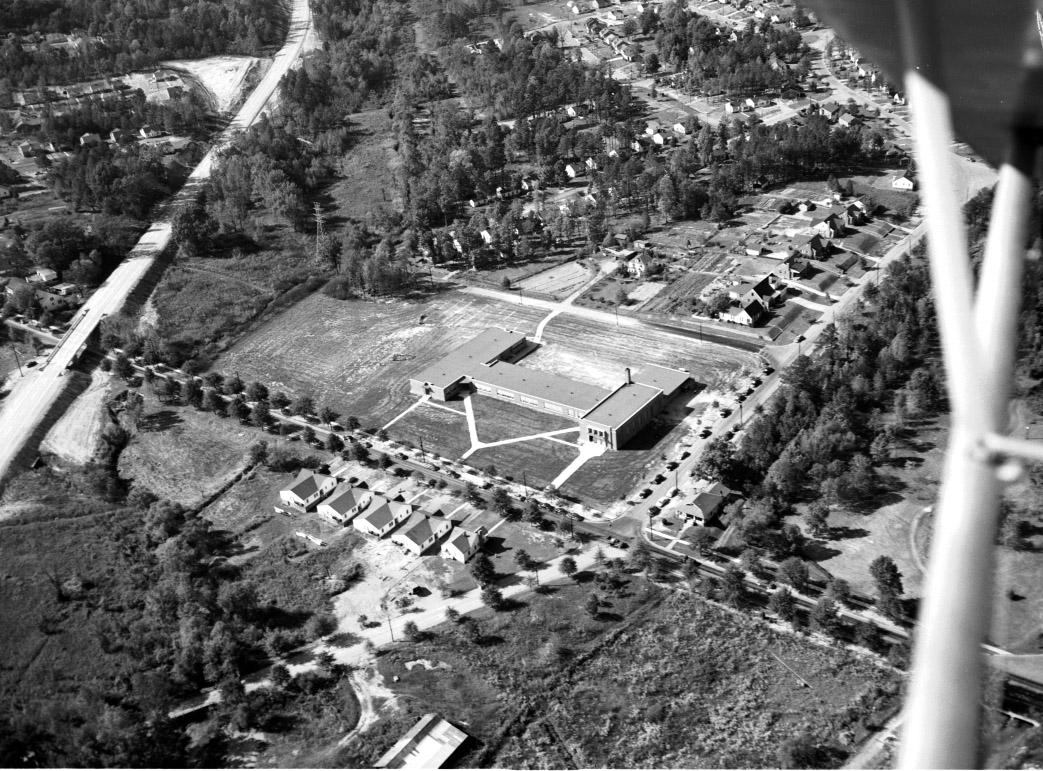 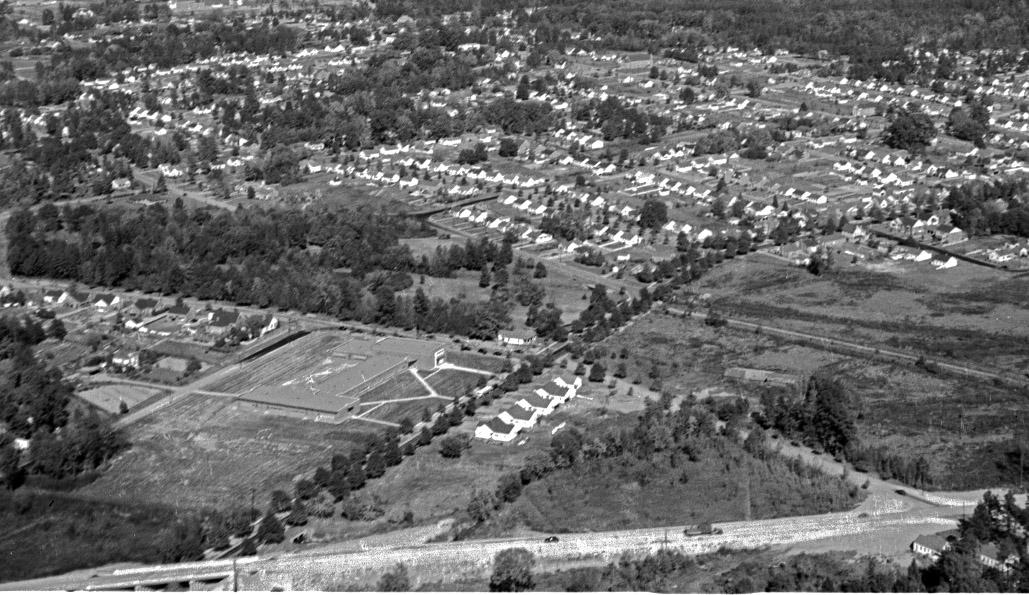 With Northgate Park in the background, 1950s.

"In 1970, Club Boulevard was paired with East End School. Children in grades 1-3 attended East End and those in grades 4-6 attended Club. Twelve years later, the school grades were reorganized, and since then Club Boulevard has served students from kindergarten through the fifth grade. School enrollment peaked in 1966 with a total population of 607 students and 20 teachers."

At some point an architecturally unfortunate addition attached itself to the front of the school like a brick-and-mortar alien facehugger. While I am sure that it is quite functional, and the materials match, it leaves the previously interesting architecture a blocky mess. It's unfortunately typical of most of our schools in this country (I don't mean to pick on Club Blvd. in particular) - once stately structures that have been reduced to the worst in institutional architecture - like hospitals, but without the money to afford all of the glass and shiny steel.

On a side note I remember when the school renovated it's playground and replaced the old metal equipment with the new style rubber/wood/padded equipment. They actually had a story on WTVD which had Madonna's "This used to be my playground" playing and showing us kids like crying as they tore up our playground equipment!:-)

"unfortunately typical"--excellent choice of words. It's so common to see schools that were quite handsome when built ruined in such a fashion...

I attended Club Blvd in the late 1970s. Club Blvd only had grades 4-6.
I was part of the group that was bussed from East End. It looked much like the original rendering from the 1950s.

Club Boulevard DPS website: http://clubblvd.dpsnc.net/index.php?option=com_content&task=view&id=115…
offers a good history of the school. It was an awesome institution when I attended, beginning in the mid 1960's. Our playground equipment was rudimentary; 2 sets of orange jungle bars (one flimsy, one stout), a baseball backstop fence near the creek, and a blacktop. We had no gym. If it rained, we skipped physical education that day. Apparently the trade-off was the auditorium, under which was the obligatory Cold War fallout shelter. The school's kiln was down there, along with green barrels of survival supplies labeled with yellow writing. Art was with classroom teachers, there was no assigned art teacher. I remember outstanding teachers such as Ms. Loch, Mrs. Southerland, Mrs. Freeman, and Mrs. Peele. In the small, 2-room office was Baxter Ridenhour, who was the first principal and his secretary, Mrs. Lassiter along with the school's single mimeograph machine.

Thanks Batman - I added some of the school history to the post.

Honestly, I don't think the school looked all that great to begin with, so I'm not saddened by the additions.

I was a student here grades 1 to 3 (1963-66). The photo at the top is how I remember the front facade, though the aerial from 1953 doesn't show another wing in the back, added later I guess. I still remember my first day of school there in '63, gathered in the auditorium with my Mom, then separated and moved on to first grade classroom. There's even a picture of me, I believe, published in the Herald-Sun commemorating that first day of school --  me sitting along a classroom table (no individual desk), holding my chin in my right palm,  elbow resting on the table and looking into the photographer's lense with a truly bored look on my face. My Dad was city editor around that time, so that probably had something to do with it. My first two classrooms each had doors openning to the outside grounds, and a small bathroom (I think). Mrs. Weatherspoon was first grade teacher, and Margaret Mumford in second grade -- she went on to become principle at George Watts in another few years, where I also attended a couple grades.  Lived abour four blocks away on what was then Woodland Dr. (now renamed), between Ruffin St and Duke St, meeting Ruby St and Glendale St. A lot kids in the neighborhoods then, and we all walked to school to most every day. Barfield park was right across the street, and Jaycee ballfield nearby as well.

I attended here grades 2 - 6. about 1955 - 1960. At the time it seemed so modern, and clean. Only good memories. Loved playing in Northgate Park, and going to Barfield Youth Center to dance on Fridays. Walked to school from our home on old Arbor St., the little one block next to the first Washington St. bridge over I-85, which was built while we lived there.

1st-2nd-3rd grade 1958-61. Lived directly across the street [W Club] in one of the duplexes. Doug and Pat Bivens were our neighbors.
What wonderful memories I have of this school. I "owned" the play ground field and became a master kite builder sometimes between
2nd & 3rd grade.

I attended from 1956 to 1962. Lived on the 1900 block of Glendale Avenue. Would walk to school down Glendale Avenue, across Hwy 70 (there actually was a stop light at Glendale and Hwy 70)