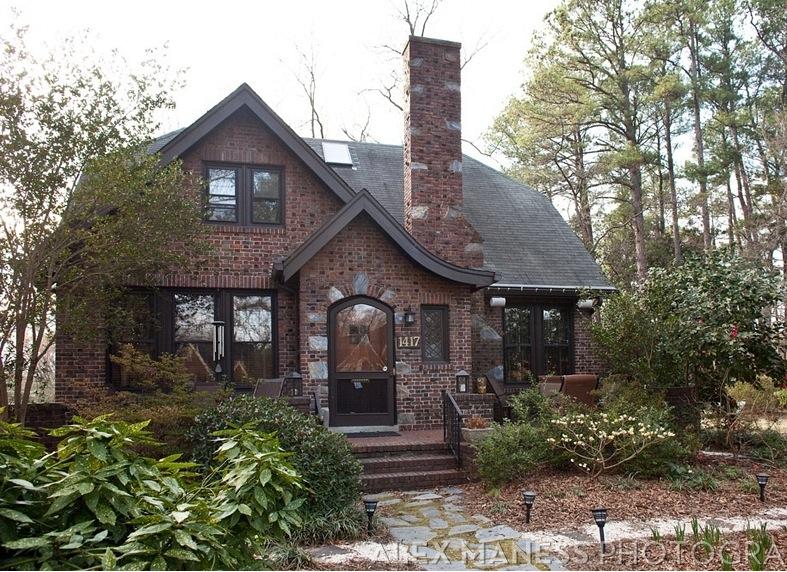 Among the last houses built in Duke Park before the crushing weight of the Great Depression halted nearly all construction, the J. A. Smith House is nevertheless an outstanding example of the Tudor or gothic revival style so popular in the Duke Park neighborhood. The house is little altered inside or out from the time James and Irene Smith first moved in, back in 1931. Its finishes and details were of first quality when they were created and they have been wonderfully preserved through the years.

Duke Park was one of Durham’s first automobile suburbs of the 1920s. Before Mr. Ford and his T model made a car a middle class necessity, city limits tended to be defined by the last stops on the street car lines. In the years preceding the First World War, the automobile progressed from a mechanical novelty to a status symbol. In the 1910s, a car cost from $2,000 to $3,000 – more than the cost of a comfortable new home at the time. When Ford introduced the mass-produced Model T, the “People’s Car,” in 1909, even it cost $850 which was still the cost of a modest home. By 1924, however, the Model T was only $250 and more than 2 million were being produced annually. Other manufacturers were forced to follow suit. In the case of Duke Park, it was the private motorcar that made life beyond the railroad tracks a possibility. There is a direct correlation between the cost of automobiles and the size of homes in the neighborhood. In the 1910s, when cars were expensive, only the well-to-do could afford to build in Duke Park. Their homes, like the Dillard House at 1311 North Mangum Street, built in 1917, tended to be mansions. As cars became cheaper, however, middle class families began to join their more wealthy neighbors in Duke Park. Middle class homes of the 1920s are more modest in size, but they still reflect the aspirations of their upwardly mobile owners in style and appointments.

Times were good. The country was prosperous, and the rising middle class was both moneyed and mobile. Real estate people developed new products to serve them. The automobile suburb soon replaced the street car suburbs of the preceding decades. In Durham, early experiments in automobile-oriented residential development are represented by Duke Park, Forest Hills, and Hope Valley. Newspaper ads for all three extolled the virtues of life in the country, clean air, larger lots, and space for gardens and parks. Nationally, the newly wealthy people of the 1920s favored period revival styles possessing strong connections to the aristocratic traditions of the past in Europe and America. Homes reflecting popular ideas of medieval manors and southern plantations filled the pages of ladies’ magazines and builders’ pattern books. The popularity of these styles is abundantly manifested in Duke Park where the Tudor and colonial revival styles dominate the first phase of the neighborhood’s development.

The J. A. Smith House on Acadia Street demonstrates that with imagination and the help of a good architect, even the owner of a cigar store and lunch counter could be lord of his own two-bedroom manor. James Alfonsa Smith moved to Durham from Georgia in 1923. He operated S&S Cigar Store and Luncheonette on Parrish Street. To design their new Duke Park residence, Smith and his wife, Irene, engaged the Durham firm of Rose and Rose. This firm designed the classical N.C. Mutual Life Insurance Building on West Parrish Street, and the Jacobean style Holloway Street School, among many other buildings in Durham. The Rose firm was meticulous. Surviving documents concerning the Smith’s house include a letter from Noell Brothers Hardware Company quoting a price of $95 for a detailed list of door fixtures, locks, knobs, and hinges - covering everything including metals and finishes. “The Outside of the Front door to have a Sweedish Iron finish Handle,” the letter declares.

That heavy iron “Sweedish” handle is still there today, a perfect compliment to the medieval theme of the house. With it notice the false hinge straps (the door opens the other way) that tie the vertical boards of the heavy door together. The main entry is framed by a Tudor or Perpendicular archway set out with irregular bluestones inlaid with the flashed and “clinker” brick cladding the house. The purpose, of course is to create a rough, antique effect. The house presents a “cottage” front to the street. This lowers the roof line under end gables that reach only part-way back along the sides of the house. The rest of the house is contained under a roof gable projecting toward the rear. This makes the house appear smaller, quainter than it really is. The clipped, 'German' gables add to the medieval appearance of the house and tie it to the popular idea of ancient buildings - like the houses depicted in Brueghel’s paintings of peasant life. This gable roof treatment is also called a “jerkin-headed” gable because of its resemblance to the shoulders of the jerkin, a sleeveless coat worn in the later Middle Ages. The asymmetrical arrangement of the overlapping front gables and the stepped chimney give the house an unplanned, organic look. The heavy iron chains containing the stoop suggest portcullises and drawbridges.

In the South, owners who wanted the medieval look on the outside often did not want it on the inside. Instead they chose a lighter, colonial style. Not so the Smiths. Guided by their architects, they bravely brought the medieval inside with baronial success. The interior of the house has been beautifully maintained over the years and is very little altered. The entry hall leads into the home’s large public rooms. These are joined by broad Tudor archways. A library or den to the left is lit by a triple bank of nine-over-one sash windows. To the right is the formal living room. The focus of this room is the wonderful molded plaster fireplace with its Tudor arched firebox and escutcheons set into the corners. Another arch leads to the dining room beyond.

The baseboards are wood finished and rise high on the walls. The unusual eight-panel doors are made of a clear, light wood, maybe fir or even maple. Their finish has ripened to a deep rich color. Their brass knobs are the very ones supplied by the Noell Brothers so long ago. Note the gothic tracery in the heating vent grilles. Nothing escaped the Roses’ attention. The sand-finished plaster walls rise to a height of 10 feet. The extra foot in height makes the interior spaces lighter and airier and relieves any oppressiveness that might have been imposed by the dark woodwork and medieval details. A hallway joins the two original bedrooms. They are quite small and their woodwork is simpler. In the Twenties, people lived in the living room and slept in the bedroom. The hearth was the center of family life, not the television.

The kitchen is also very small. It was a service space, meant for work and not for guests. Originally, it was occupied by a stove and sink. Built-in counters were still a novelty in the South even in the 1930s. The reason for this is simple. Labor was inexpensive and the Smiths and their neighbors would have had cooks and other servants. The icebox would have stood in the screened porch (now the enclosed laundry). The original layout of the kitchen is something of a mystery as the space has been altered more than once. It appears that a door once gave access into the kitchen from the hall through the arch. This door was later closed up to create a chase for ductwork to the addition created in the attic space upstairs. Because the house always had a permanent stairway to the attic, the creation of additional living space there had only minimal effect on the original home below. The original breakfast nook/ butler’s pantry has also been changed. The sheetrock on the northern wall reveals where the built-in hutch once stood.

James Smith died in 1968. His wife, Irene, lived in the house until just before her death in 1990 at the age of 90. They are buried in section 2 of Maplewood Cemetery. The home they created is so obviously special that subsequent owners have cared for it as the Smiths would have wanted. The J. A. Smith House is an excellent example of its style and an important chapter in the story of Duke Park. 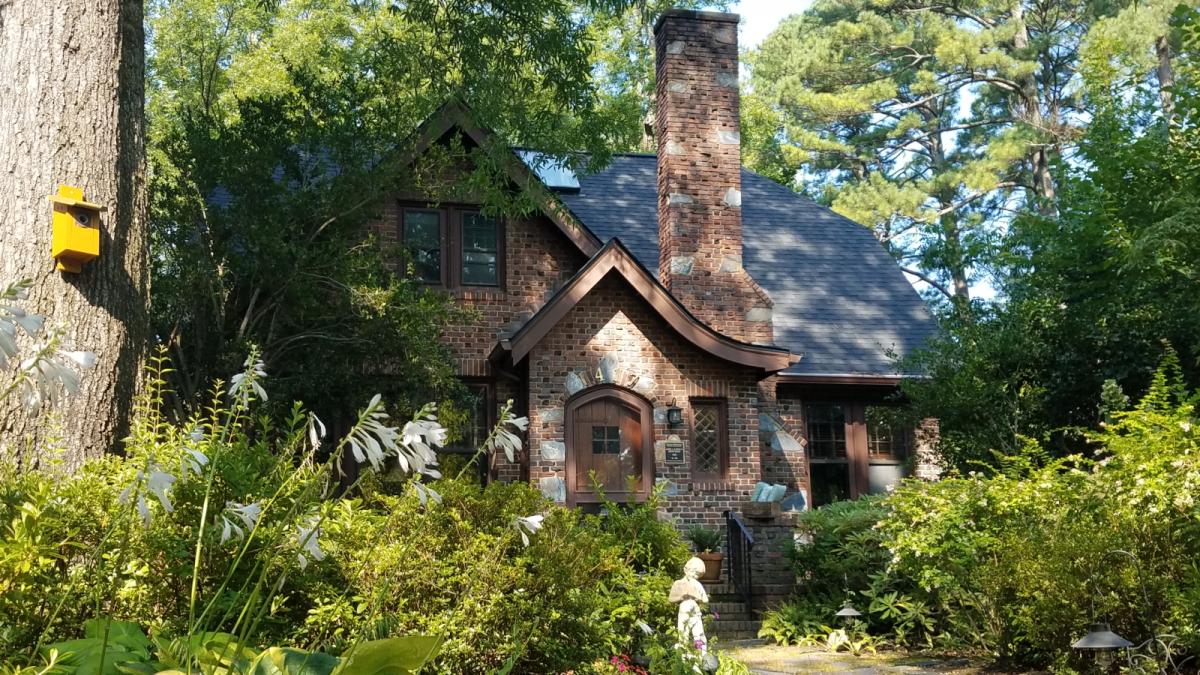 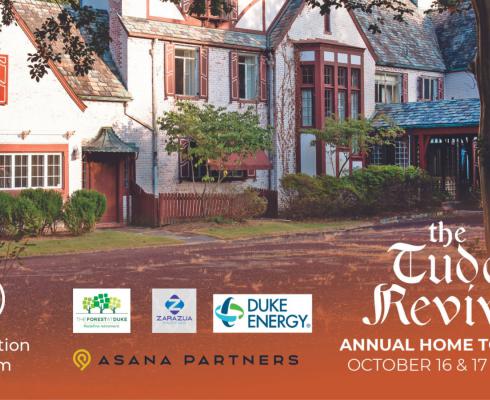 This is exactly the style of home you can find in older neighborhoods in Atlanta, especially the historic Morningside area, which was developed in the early '20s. I love this type of architecture and didn't realize there were homes of this nature in Durham. Thanks for the post.

True! The style and brick color are very similar to my friend's house in Morningside.