The house at 907 Jackson Street (the southeast corner of Jackson and Buchanan) is another of West End's small Victorian houses built in the early 20th century, characterized by a generous front porch and sawnwork details. 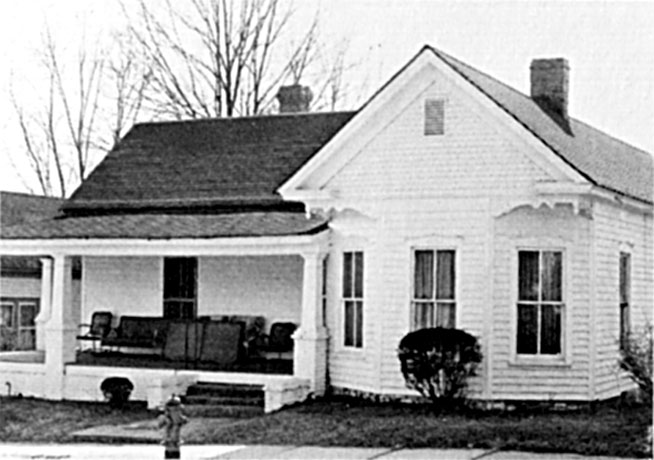 I noticed a few months ago that the house had been foreclosed upon, and it went on the market for $37,000. It was bought fairly quickly, and I watched over the summer for signs that it might be gutted/vinylized. As work started on the house, I was optimistic, as it looked like they were taking pains to preserve the detail.

And they appear to have done a fine job with the restoration of the house (although it never would have had a railing like this, particularly unpainted.) 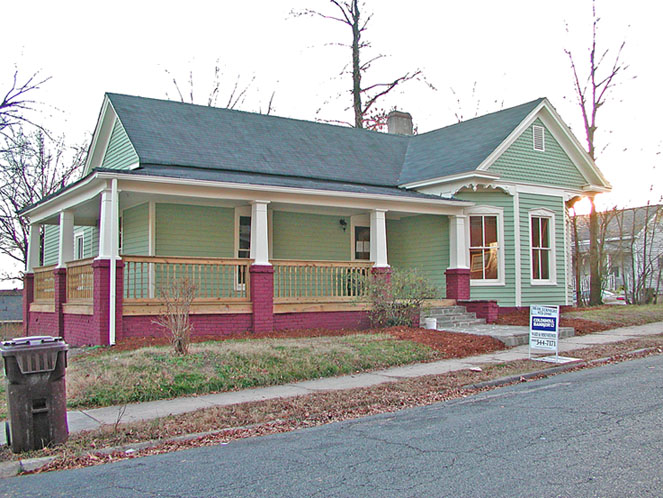 Update: The property sold after ~3 weeks on the market.

The single-story, late-Queen Anne-style was a speculative house and later the long-time home of the Louis and Anna Dixon family; the Dixon’s daughter, Clarice, also owned the house. It is a common dwelling style and type built in Durham—and across North Carolina—in the earliest years of the twentieth century. The front-facing gable and the gabled wing that extends to the side are common elements of the form, while the sawnwork brackets, cutaway bay, and decorative shingles in the gable are characteristic of the Queen Anne style.

Landowners in the area south of today’s Durham Freeway and west of S. Duke Street sold house parcels as early as the 1880s, kicking off development of what would become the Morehead Hill neighborhood. Speculative development was not uncommon, but the pace of development was slow until the early twentieth century. Gaston Vickers, who owned a farm along S. Duke Street, built several rental houses in the early twentieth century and also sold vacant lots to investors. J. O. Lundsford and W. J. Christian bought the parcel at the southeast corner of today’s Jackson Street and Buchannan Boulevard in 1904. The dwelling they erected is a typical spec house for the time.

John W. Davis and wife Katie are the first known occupants. They were living in the house by 1907 and purchased it from Lundsford & Christian in 1909. Davis was a cashier at the Seaboard Air Line Railroad depot on Dillard Street. The Davis’s children Margie and James were likely born while John and Katie lived in the house.

In 1918, they sold the house to Louis A. and Anna Dixon and Louis’s brother David W. Dixon. The brothers owned an eponymous grocery just four blocks away on W. Chapel Hill Street near today’s bridge over the Durham Freeway.  Louis and Anna lived in the house and raised their two children, Clarice and Thomas. In 1930, according to the census, their children were teenagers and the house value was $4,000. After Louis’s death in 1947, his Clarice, in her early-thirties, and her husband J. Albert Taylor lived in the house until 1960.

A succession of shorter-term owners followed. The house eventually went into foreclosure in 2006. A local real estate investor purchased and renovated the house and sold it to an urban planner and his wife, who were looking for an older house in a bike-able neighborhood. They sold the house in 2010 to the current owners.

Vernacular Queen Anne-style cottages with the gable front-and-wing form seen here were commonly built in Morehead Hill and the West End—as well as in the mill towns that surrounded downtown—in the early years of the twentieth century. A few architectural details add elegance to the otherwise simple dwelling. Cutaway corners distinguish the projecting front wing, as do the decorative shingles in the gable and sawnwork brackets at the cutaway corners. The huge, original windows have two-over-two sash and molded hoods. A hip-roofed porch extends across the side wing and wraps around its side.

Changes in the twentieth century include a rear extension and the replacement of original porch posts and railings. The current battered posts on brick piers are a typical Craftsman-style element that was popular on bungalows but also a common upgrade to older houses in the 1920s. The porch went without a railing for decades; the current rail was installed in the 2006 renovation. That renovation also replaced much of the siding that wasn’t sheltered by the porch and updated interior spaces, but many original details and materials remain.

Inside, the gracious floor plan has a wide center hall and commodious rooms with 10-foot high ceilings. The flooring is heart pine, the ceilings are beadboard, and window and door trim have bulls-eye cornerblocks as well as unusual cornerblocks with incised cross marks (some are replacements). The three-sided bay that forms the front wall of the very pleasant living room offers an expansive view of the neighborhood to the north. The back deck, meanwhile, overlooks much of the streetscape behind the house, thanks to the change in elevation as Arnette Street extends to the south.

Are you familiar with 201 E. Trinity? My wife and I looked at it a few weeks ago. Pretty magnificent, and very interestingly restored/preserved.

EricDo you mean the big

Do you mean the big Victorian on the corner of Trinity and Roxboro? Neat house; they started out way too high on the price in my opinion (?$369,000) given the location on a busy corner, but they've come down to $279,000 now. I think they'll get taker in that range. I love the tower - as you can tell by quite a few of the pictures on here, it used to be relatively common on the large Victorian-era houses, but it's rare to find one in Durham now. (That one and the one on Watts are the only two I can think of).

What's wrong with the railing

What's wrong with the railing (other than being unpainted)? I don't know enough about these things to see the problem.

My insurance company wanted me to put railings on my 1910 Victorian; I couldn't see any evidence that they had been there before, so I refused (finally settled with State Farm, who appears not to care).

It's pretty atypical for this

It's pretty atypical for this box post/brick pillar setup to have railings, but if they do, they are pretty hefty to match the bulk of the post. You'd never see turned spindles combined with box posts - only with turned posts. If someone really felt the urge to put on a railing, squared, thicker spindles would be in order. (Interestingly, though, it seems likely that this support system may be a replacement. Turned posts would be what you would expect with a Victorian that has the other details it has.)

OK, I get it. Since my house

OK, I get it. Since my house has turned (round?) posts, turned spindles would be OK.

Feel free to have a look and offer your opinion:
911 W. Club

Mostly I didn't want to put in a railing because I'm lazy and cheap, but if it's not out of place historically I don't mind doing it as part of our tax credit plan.

DaveI think it would be out

I think it would be out of place on your house (nice, by the way). Those columns look original, and if it had ever had a railing, the bottom (~1/3) of the column would have been squared to allow the railing to butt against a flat surface rather than the round surface. Your house is more minimalist in the exterior detail than those houses overall (I've walked by it before when checking out the plight of the DC May house and the stuff being built in its place.) The lack of a railing is in keeping with that.

Funny to see Albee's and Stecker's names on your site - it's been a long time since I've heard of those guys.

I believe this house has

I believe this house has already sold for just below asking price (approx. $145K). It is on the boundary of Morehead Hills and the West End. Also the new Habitat houses are appraising around $120K.

I've been living on Buchanan

I've been living on Buchanan Blvd Since the Emily K. Center was a Don's Dog Hut and a small Dirt Lot. I always had a gut feeling some things were going to change even before the bulldozers. Parking in the area is tight at times but it's nice to be able to be in walking distance to a good amount of things and close to the highway and ballpark. I know i will be getting my investment worth when i make maoves.