The Union Missionary Baptist church has destroyed an important piece of African-American history by destroying the former Royal Ice Cream Parlor, the site of very early sit-ins, even before Greensboro.

Back in the 1950s, this building was the Royal Ice Cream parlor, a segregated business. From a timeline sent to me:

The Royal Ice Cream parlor continued to be a focus for anti-segregation protest, such as this one on ,1962. 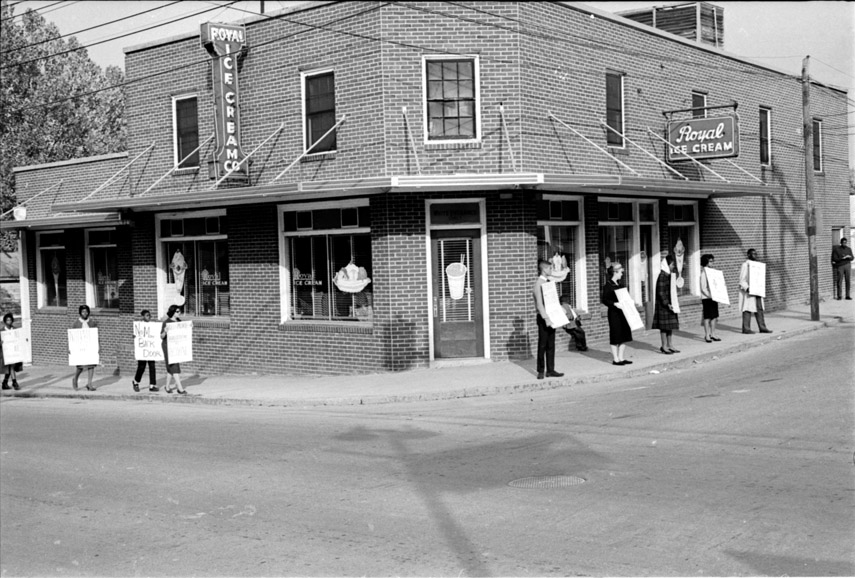 Looking northeast from the corner of Dowd and Roxboro.
(Courtesy Herald-Sun)

And protesters continued to face the small-minded attitudes of the smug and self-centered. 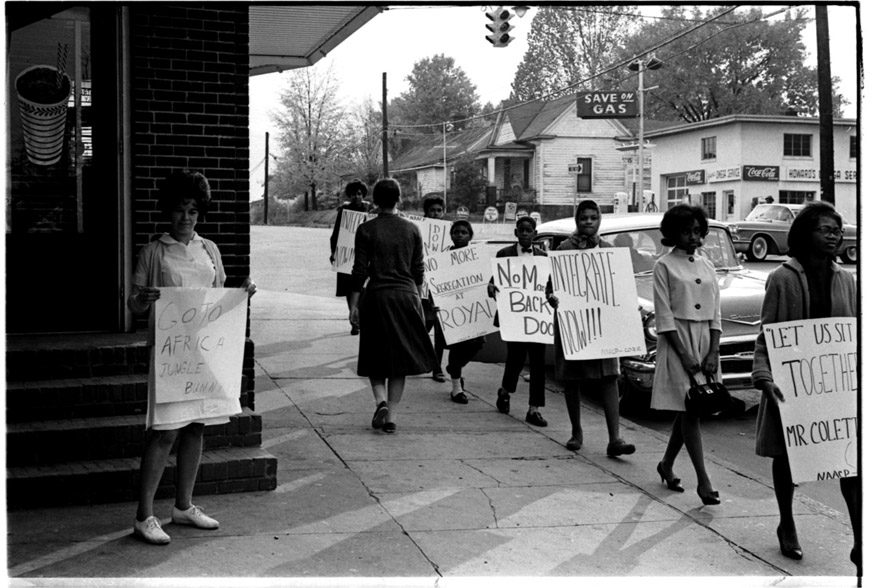 Royal Ice Cream eventually shut down - I wonder if it refused to integrate.

In recent years, the building was Charlie Dunham's, a market. 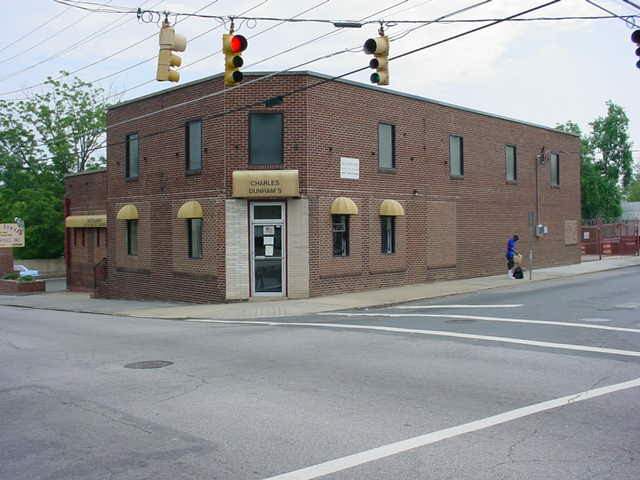 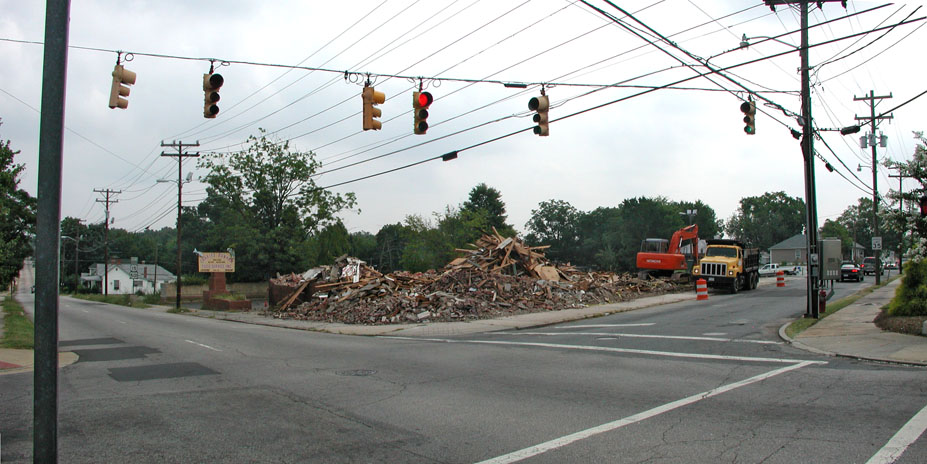 This bolsters my theory that while faith communities have, in the past, brought together the community at large, at present they are one of the preeminent threats to history and architectural preservation. In an effort to attract more patrons, inner city churches aggressively expand surface parking, to the detriment of the neighborhood and irreplaceable historical sites. Union Missionary Baptist has acquired large amounts of property around their buildings, including many houses. If you are a fan of the continued existence of any of these houses, please contact the church, the planning commission, city council, etc. 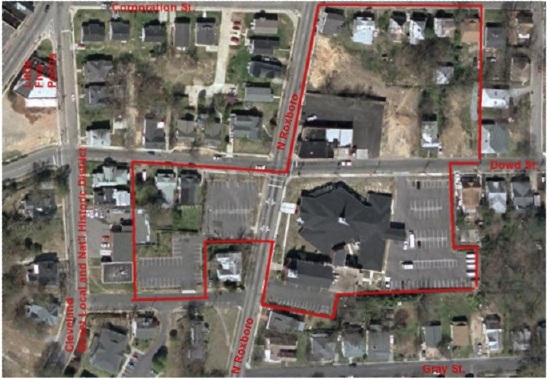 Property holdings of church outlined in red, including now-demolished buildings at the northeast corner of N. Roxboro and Dowd.

Me with the demolition site, August 2006 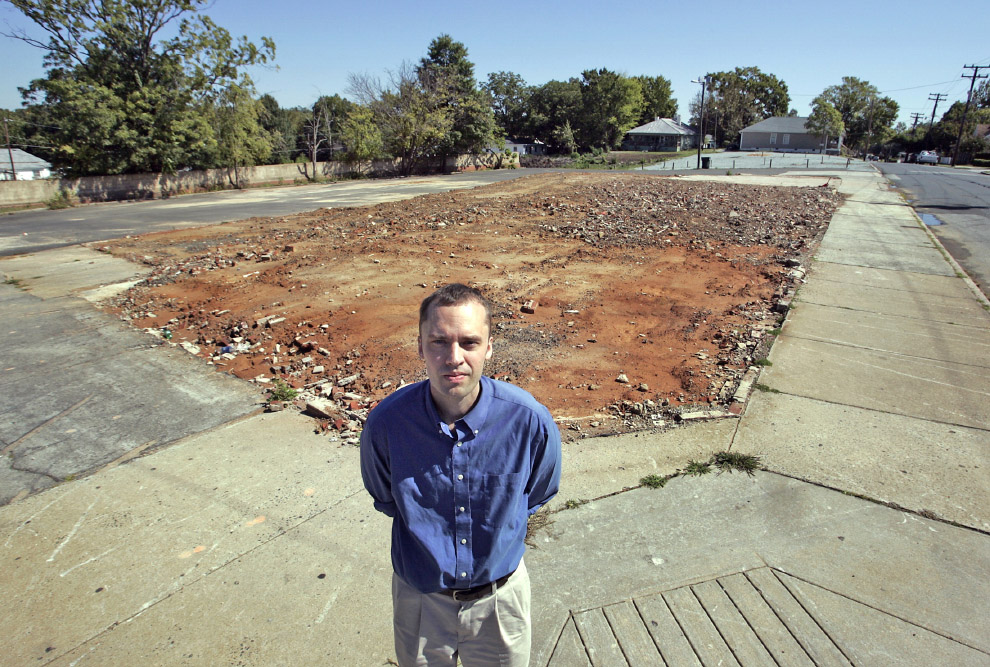 (Photo by Herald-Sun; this post garnered the very first publicity for Endangered Durham, and the photo is from the accompanying article.)

Since I first posted this, the history of the Royal Ice Cream sit-in, almost completely ignored when I first wrote this, became big news with the dawning of the 50th anniversary in 2007. Unfortunately, the building - which could have become a classroom with power in its walls - did not survive to see the day. While on 12/17/07, the State (belatedly) approved a historic marker to mark the site, it seems a partly hollow victory to me. For what better evidence of the mutability and adaptability of buildings is there than affixing a civil rights historic marker to a building once sullied with "Colored" and "White" signs over separate entrances? What greater victory is there than repurposing a venue that symbolized inequality to pay hommage to the bravery of the people who fought back?

The demolition of the building has gone entirely unmentioned in the run-up to the marker, but here's to not forgetting any misguided actions.

The proposed school for the site has been constructed; I am sure that it is a boon for the neighborhood to have additional neighborhood school options, so kudos for getting a school built on the site. The architecture is terrible, but to be fair, I haven't seen a school built in the last 10 years that isn't architecturally abysmal - something between mini-mall and self-storage suburban seems to be the motif.

The architecture again makes clear to me - with its setbacks and drives, its blind side to N. Roxboro, the uselessness and squandered opportunity with the demolition of Royal Ice Cream. You can see the historic marker in the photo below. Great. I'm glad there is something, but markers for things that aren't there anymore - and we so recently had an opportunity to save (i.e. in the last 60 years) - are simply depressing to me. Particularly given the the entire Royal Ice Cream building could fit in the corner landscaping and driveway.

I wish I better understood this decision without the blame being placed on construction or architecture - where I know better. Integrating - pun intended - this building into the site would have been feasible if the desire to do so was present. Is/was it a decision of spite? Was it a desire to obliterate reminders of that era - to forget the history where this happened by erasing it off the face of the earth? Was the assertion of power by an African-American church over a building where a doctrine of white supremacy was practiced a form of you-don't-have=power-over-me-anymore?

That's the only explanation that rings true to me - and if that is the case, I can understand the psychology, although I wish a less visceral response had prevailed. Decisions to preserve places where people were denigrated, tortured, or killed are not easy ones - but so very necessary. It becomes so easy to believe, without tangible evidence - that such things never could have happened - or to believe that no person is capable of such things -but particularly that it would be so normal is what is so disturbing to me - that people could walk by separate entrances labelled "Black" and "White" without stopping in their tracks.

And that is what is missing in a historic marker - context. That sense of how normal this became, and how normal such indecencies could (some might say, with the human track record, inevitably will) become again. That chill up your spine from seeing the signs, seeing the physical segregation of space - that is what brings home the reality. I will never forget drinking from a water fountain in Charity Hospital in New Orleans as a 24 year old medical student; the walls were marble, the fountain one of those old porcelain fountains with chrome fixtures mounted straight to the wall. I'd drunk from this fountain perhaps a dozen times before - it was near the main entry. For some reason, on this occasion, I lifted my eyes while stooped over at the fountain, and saw the wall directly in front of me. There, on the marble - so faint that you wouldn't see it from a distance, was the outline of the word "Colored," once painted on the wall but then long removed.

I'll never forget the feeling that I had upon seeing that - akin to "Oh my God, this really happened - here." Seems silly on some level - I knew that it had happened; I learned it in school. But seeing it was a different thing all together - it happened in the world that I inhabit - and, by implication, could happen again. That isn't to say that racism wasn't and isn't present, but such racism certainly didn't, and doesn't have mainstream acceptance.

That is what the kids in this school could have seen and felt - and interpreted for themselves. They've been denied that opportunity by the anger of an earlier generation.

Very sad. We drove past

Very sad. We drove past before we left. Powerful juxtaposition of church and its ruins, destroyed by the bombs of parking.

Just a few blocks to the

Just a few blocks to the north of this site, lies Grace Baptist Church which now sits alone on an entire city block bounded by Roxboro and Mangum/Trinity and Seeman. Parking and play areas now occupy the sites of buildings torn down decades ago. The irony is that both of these existing spaces are vastly underutilized due to a waning of church activities. When Union Baptist ebbs, what will come of their vast parking space?

Just a correction, in the

Just a correction, in the timeline a correspondent sent in, Gary, the last name of the Royal 7 member is listed as Vivian Lee Williams...that's Virginia, not Vivian. Thanks!

I shared your great dismay

I shared your great dismay about the inexplicable destruction of this building and quoted from you when I covered the historical marker dedication here.

With today's dedication of the Greensboro Civil Rights Museum adjacent to the Woolworth's, I mourn further the loss of our own memorial of those struggles.

Atleast a school for all

Atleast a school for all resides in it's spot.