A dense canopy of tall hardwoods lines the streets of the approximately eight blocks that constitute the small neighborhood of Trinity Heights. This neighborhood took its name from Trinity College, now the East Campus of Duke University, the construction of which began in the same year that the building lots in Trinity Heights were platted. The title "Heights" may refer to its location north, or above, Trinity College, or to the fact that Trinity Heights occupies the highest and most level ground of the 286 acres that Julian S. Carr and Richard H. Wright purchased in 1890. This enormous tract, covering the two present-day neighborhoods of Trinity Heights and Walltown, was a very attractive target for real estate speculation at the turn of the 1890s due not only to its proximity to the new campus, but also because of its anticipated transportation service to central Durham.

It appears that Carr and Wright formed the Durham Consolidated Land and Improvement Company, which purchased the 286 acres, with the expectation that the trolley system, formed in 1885 and named the Dummy Street Railway, would be extended north of the campus.l For several years, however, the real estate development did not proceed far beyond the platting of the acreage into 56 blocks of residential lots as the Dummy Street Railway proved to be an unsuccessful operation. The Durham Consoli- dated Land and Improvement Company even proposed to purchase the Dummy Street Railway when it seemed to be on the verge of col- lapse in 1891 as insurance for its land invest- ment. These efforts failed; by 1894 the trolley system was dismantled rather than expanded. The speculative nature of Trinity Heights remains evident today in the grid pattern of its streets. Moreover, for many years the streets running east-west were designated by letters and those running north-south by numbers.

Fortunately for the Durham Consolidated Land and Improvement Company, it appears that the sale of some lots and, the subsequent building of a few houses in the southern portion of the tract, soon called Trinity Heights, began in the 1890s, prior to the advent of the Durham Traction Company and its new efficient electric trolley system. This successful enterprise, estab- lished in 1902 by the financially astute Wright, greatly enhanced the location of his Durham Consolidated Land and Improvement Company's 56 blocks of residential lots and spurred their development. In the meantime, though, Trinity College created new jobs and many of them, especially those for instructors and professors, drew newcomers who sought homes convenient to the campus. A few houses, such as the Osborne House at 818 Clarendon St., exhibit a variety of decoration, including rich ornamen- tal sawnwork and drop pendant brackets, that confirms a late 19th-century date of construction. The R. N. Wilson House is particularly noteworthy for the carved fan patterns ornamenting the series of arches that frame the wrap- around front porch. Many Trinity Heights homes are _characterized by features that are typical of the early 20th century as well as the late 19th: frame two-story houses, one room or two rooms deep with rear one-story ells and simple decoration that often combines sawn and turned ornament with basic Colonial Revival style details such as Tuscan columns.

Published in 1913, the first Sanborn Insurance Map of Durham to include Trinity Heights shows that the neighborhood still lay outside the Durham city limits and was considered part of West Durham. The map reveals that in less than twenty years the neighborhood had established a development pattern which remains evident today. Except for the 900 block of Clarendon St., the majority of the lots in every other Trinity Heights block that is developed today had houses on thm by 1913. The irregular outline of the neighborhood includes the 900 as well as the 800 blocks only of Lancaster and Clarendon streets, its eastern and west- ernmost streets respectively. From the beginning, the 900 blocks, of the other three streets were black-occupied and considered part of the separate neighborhood that soon became known as Walltown. The map also shows that the 800 block between Berkeley and Sedgefield streets, which has no buildings on It and is completely overgrown today, was the least developed block in 1913, containing only three houses - all destroyed. As Trinity College first began making plans in the late 1920s for its expansion as Duke University, this block was purchased when the administration considered. extending the original campus. After Trinity Heights real estate prices soared as speculators learned of the college's intention, this plan was abandoned in favor of purchasing thousands of acres to the southwest for a new West Campus. The Trinity Heights tract today remains in Duke University ownership.

The link between Trinity Heights and Trinity College remained strong in the first two decades of this century, although many people moving into the neighborhood were not associated with the school. Several people ran boardinghouses that lodged unmarried faculty and served meals to students - for instance, the Thompson House at 806 Onslow St., one of the few brick houses in Trinity Heights. In 1914 Mrs. Martha Nichols, widow of an Orange County deputy sheriff, brought her family to the house at 910 Lancaster St., one of the first half dozen houses built on this street. Electrical contractor John Dennis and his son, Willie Dennis, bought two other houses in the 900 block of Lancaster in the 1910s.

A practice adopted by many enterprising Durhamites, eager to profit from the city's rapid expansion, was exemplified by F. M. Tilley. Initially a farmer by trade, Tilley purchased much of the 800 block of Lancaster St. and built houses for speculation, such as the H. C. West House at 822 Lancaster. He also is reported to have been hired to build several other houses in the immediate area on land that he did not own.S The house that Tilley built for himself at 806 Lancaster St. is a bungalow, exhibiting a characteristic full-facade recessed front porch supported by elephantine brick pylons.

As throughout the rest of Durham, by the 1920s the bungalow was one of the most popular house types in Trinity Heights. Two distinctive examples appear on Green St. Cedar shake shingles and exposed post and lintel beamed construction distinguish the house at 1308 Green St., while a very broad arch penetrates the gable above the engaged porch of the house next door at 1310 Green St. At 1600 Green St., the large two-story bungalow, resembling California style bungalows due to its overall pro- portions and the low, broad roof, is the most substantial house with bungalow features in Trinity Heights.

Two of the most interesting houses built in Trinity Heights in the 1920s are located on W. Markham Ave. Both are constructed for affil- iates of Trinity College. The two-story T -shaped house faced with random coursed ashlar - the same sort of masonry found in the low wall surrounding the East Campus across the street - was built for Professor Cunningham, a zoology professor. The house next door at 1204 W. Markham Ave., built around 1930 for Assistant Treasurer W. L. Whitted, is one of a handful of Spanish Mission style houses constructed in Durham during the 1920s and 1930s by contractor Tyson Crisp.

In spite of a certain amount of decline that is typical of most older city neighborhoods, Trinity Heights retains much of its original ambiance. Many long-time residents remain, including a few whose parents were the first owners of their houses. The neighborhood's association with the former Trinity College is as strong as ever, except that now it is manifested mainly by the conversion of many of the larger old houses to apartments rented by college students.

(From the Durham Architectural and Historic Inventory, 1980) 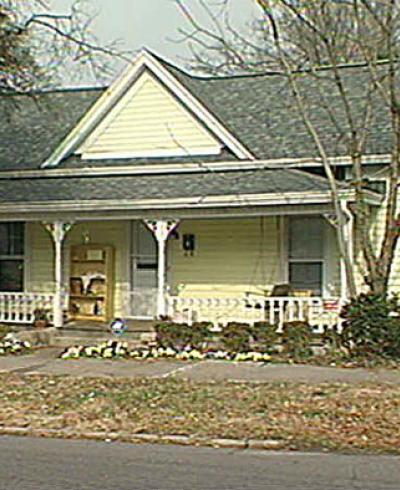 Several of you wrote me to alert me to the fact that Jeff Monsein, whose name you may recognize from ads for his "Aluminum Company of North Carolina," intends to tear down a contributing property in the Trinity Heights National and Local Historic district - a house that he has owned for some time at 1704 Markham Avenue. Per the agenda of the...
Read More 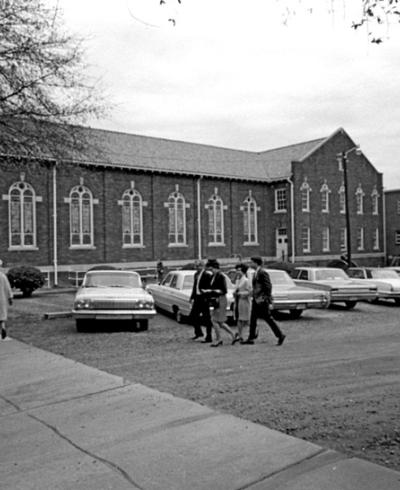 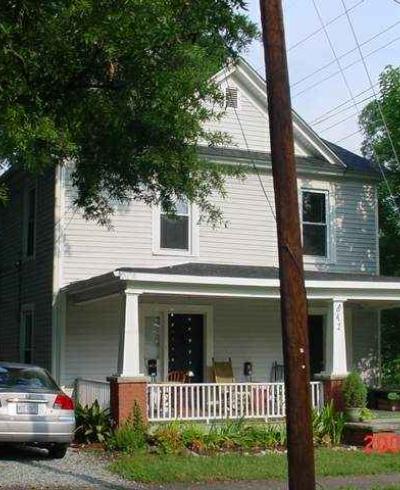 (Below in italics is from the National Register listing; not verified for accuracy by this author.) Small circa 1920 frame Foursquare with two-bay main facade, tall hipped roof with front gabled attic dormer and full­ facade porch on molded tapered box posts and brick plinths. Now divided into apartments.
Read More 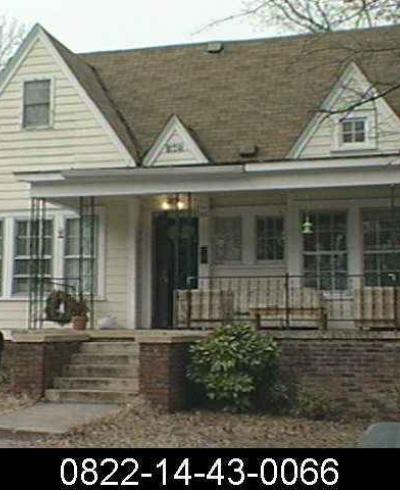 (Below in italics is from the National Register listing; not verified for accuracy by this author.) Late 1920s or early 1930s one-and-one-half-story frame cottage with gable-end roof and a series of very shallow gabled wings at various heights on main facade. Porch has replacement metal posts.
Read More 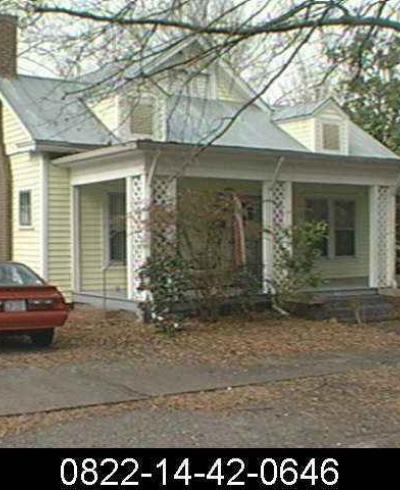 (Below in italics is from the National Register listing; not verified for accuracy by this author.) One-story one-room-deep frame house with original wing across rear built 1900s. Alterations include addition of half-story to rear wing, dormers on front block and new porch supports of paired posts with latticework in between.
Read More 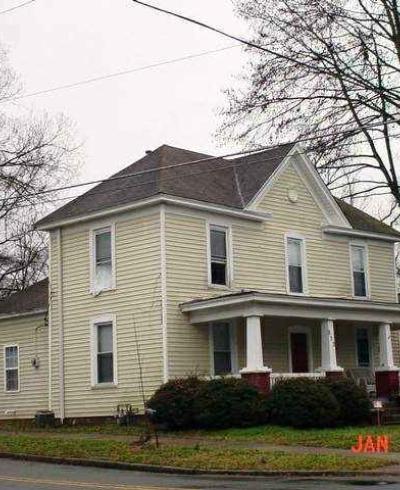 (Below in italics is from the National Register listing; not verified for accuracy by this author.) Two-story one-room-deep frame house with hipped roof and rear one-story ell. Features decorative cutwork vent in front gable, pointed arched surrounds at windows and main entrance, Victorian window with colored panes in front door, and almost full...
Read More 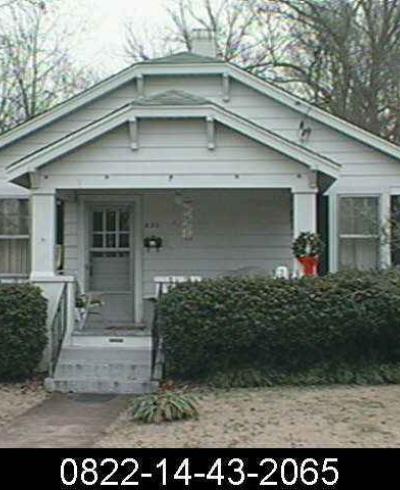 (Below in italics is from the National Register listing; not verified for accuracy by this author.) Narrow one-story bungalow with attached porch on box posts and brick plinths at center of main facade. Both house and porch have clipped gable fronts and simple triangle brackets in eaves. Aluminum sided.
Read More 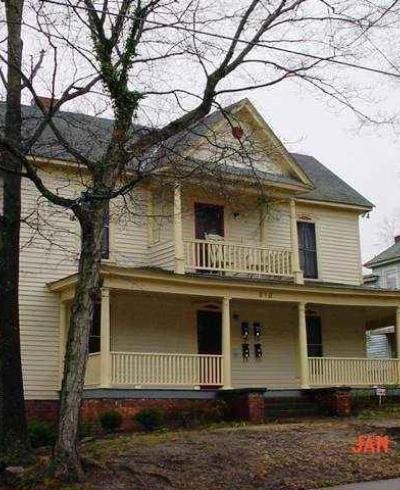 (Below in italics is from the National Register listing; not verified for accuracy by this author.) Turn-of-the-century frame house with combination of Victorian and neoclassical features. The two-story one-room­ deep basic house form with a hipped roof is embellished with applied bargeboard in the pointed window lintels and drop pendant brackets...
Read More 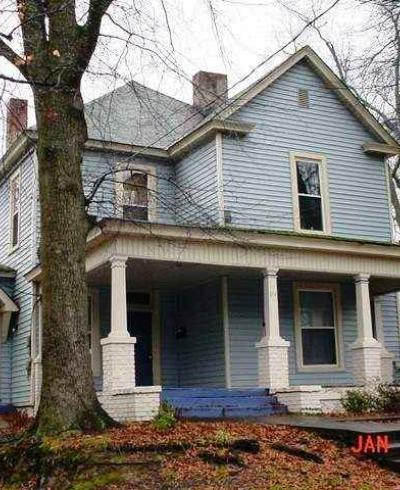 (Below in italics is from the National Register listing; not verified for accuracy by this author.) Irregularly-shaped two-story frame house with hipped and gabled roofline. Distinguishing features include molded box cornices with returns and plain frieze boards, two-over-two double-hung sashes, single-paned transom above entrance; porch across...
Read More 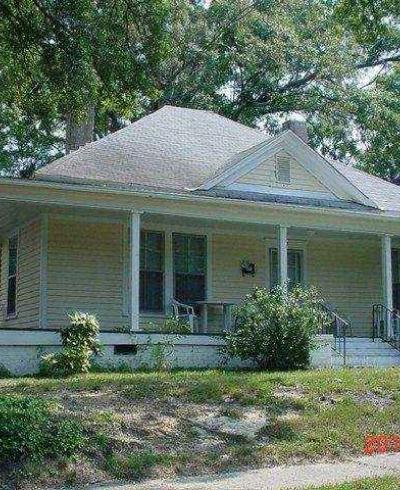 (Below in italics is from the National Register listing; not verified for accuracy by this author.) One-story, two-room-deep house with tall hipped roof, gabled front attic dormer and wraparound porch supported by Tuscan columns. Reportedly built 1900s by Floyd Wright who sold it to mother of present owner.
Read More