Known variably in its northern extent as part of Hayti, in its western extent as "Dunstan" and in its eastern extent as "Lincoln Hospital," the Stokesdale neighborhood represented a 'second phase' of development of the large African-American community living in Hayti, to its north. Although there were not clear boundaries between the communities, the character of Stokesdale, was, on balance, more typical of a early-to-mid 20th century suburb than the earlier styles of Hayti. This is most clear on the streets east and west of Fayetteville, as leaders in the community were building houses in a southerly direction on Fayetteville from the early 20th century, which accelerated with the establishment of the National Training School / NC College / NCCU in 1910.

From the National Register nomination for Stokesdale:

Though the name Hayti did not appear in census records or deeds until 1877, by the turn of the twentieth century it was the most prominent black neighborhood in Durham. Extending along Fayetteville Street from Pettigrew to south to Umstead Street, it was not a part of incorporated Durham until 1901. Yet, exclusion from the city limits served both whites and blacks, by providing racial separation, as well as saving blacks from the city’s tax burdens. At the same time, the proximity of the neighborhood to town provided blacks easy access to work in tobacco factories and related businesses. Built on the farmland of some of Durham’s early white merchants, the development, centered on the ridge of Fayetteville Street, had shops and offices interspersed with the community’s finest houses, some equivalent to those built by white businessmen north of the tracks. Aaron McDuffie Moore had a two-story home on Fayetteville, next to White Rock Baptist Church and John Merrick had a large Queen Anne style home at 506 Fayetteville. These turn-of-the-century homes displayed Victorian details typical of 1880-1910 development throughout Durham.

There was very little development south of Umstead Street prior to 1910. Instead, development was concentrated to the north, in Hayti proper. By 1910, the aging wood structures in the business district along Fayetteville and Pettigrew were beginning to be replaced with brick buildings while fashionable dwellings continued to be erected along Fayetteville Street to the south. The 1913 Sanborn Fire Insurance Map shows homes along the west side of Fayetteville as far south as Linwood Avenue, while the east side of the street remained largely undeveloped.

Lands south of Umstead Street were platted and developed beginning in the 1910s. The Hammond Property was platted by B. L. Duke in the early twentieth century, prior to the establishment of the National Religious Training School and Chautauqua. The land extended from Dupree (then Lucille) Avenue south to Creo Avenue and from Lincoln (then Oriole) Street west to Swift Street. The Hammond Property was re-platted after 1909 when Duke donated a large section of the property south of Lawson (then Thomas) Street for the construction of the school. Likely noting the potential impact of the developing school on the surrounding neighborhoods, the Merrick, Moore, Spaulding Company subdivided the lands of Dunstan, Mincey, and Roberson in 1911, creating individual parcels along Price (then Mincey), Concord, and Moline (then Doctor Moore) Streets west of Fayetteville. While the area was available for development and near the newly-established National Religious Training School and Chautauqua, it was several blocks from the rest of developing Hayti and, thus was not developed immediately.

The largest portion of the district was platted in 1912 as “Stokesdale,” the property of Mrs. Mary G. Stokes, widow of Alvin H. Stokes. Stokes was a prominent white businessman in Durham in the nineteenth century and lived in a large house on the east side of Fayetteville Street. Stokes was principal of the Mangum Male Academy, joined the Durham City Council in 1881, and was a stockholder in the Morehead Banking Company by 1884, when he joined his brother-in-law John C. Angier to help erect the Durham Woolen and Wooden Mills Company. He was also associated with the Fidelity Trust Company and Savings Bank in 1887 and served two terms as a County Commissioner in 1890 and 1892. Stokes presumably died before 1912, when his wife divided their land along Fayetteville Street into parcels, with the newly platted neighborhood being called Stokesdale and their ‘mansion’ remaining in the center of the neighborhood.

The Stokesdale plat adjoined the Hammond Property to the north and encompassed all of the land from Lawson Street (formerly Thomas Street) north to Simmons Street (formerly Sherman Street) and from Fayetteville Street east to the lots on the east side of Lincoln Street. The land was divided into 190 lots, most of them 50-feet wide and 125- or 150-feet deep. Indexes from the Durham County Register of Deeds indicate that Mrs. Stokes began selling the lots in 1913 and those lots along Fayetteville Street and surrounding the Stokes home were the first to sell. In 1917, the Duke, Watts, and Hill families supplied the money to purchase the home tract of the Stokes estate for the construction of the new Lincoln Hospital, which opened in 1925. Construction of the hospital spurred development south and east of the new facility and by the early 1920s nearly all of the parcels between Fayetteville and Merrick Streets, as well as the westernmost parcels in the blocks just east of Merrick Street had been sold by Mrs. Stokes to private homeowners.

Development in the east end of the neighborhood was sporatic in the early years with fewer than twenty individual parcels being sold east of Spaulding Street by 1924. However, by the mid-1920s, Mrs. Stokes began selling large amounts of land in the neighborhood to Spaulding and other banking and development agencies. In 1924 and 1925, Spaulding purchased nearly all of the undeveloped lots in the Stokesdale neighborhood, eventually purchasing at least 111 of the 190 parcels. In addition to her transfers to Spaulding, Mrs. Stokes also deeded property to Mechanics and Farmers Bank, McDougald, McDougald- Merrick, and the Mutual by 1932. In 1928, Stokesdale was re-platted by T. D. Parham and Associates with twenty-nine parcels marked by number, presumable to be sold at auction by Durham Auction Company, Inc, listed as “selling agents” on the plat. It is unclear how Parham may have been associated with Spaulding, as many of the numbered lots include those originally sold to Spaulding. The real estate subsidiaries of the Mutual evolved over time, but at this point appear to have bought and sold land, without erecting structures themselves. Rentrope, who grew up at 619 Price Street, noted that the company tied the sale of the property to her parents in1938 with construction financing through Mechanics and Farmers or another local bank, but the construction of the house was left to the purchaser.

By the late 1930s most of the land between Hayti and NCCU had been developed with vacant parcels still available in the interior of the neighborhood, but construction continuing to the south and west of the district, particularly as NCCU expanded its enrollment and curriculum. Stokesdale was viewed as an extension of Hayti, which, according to Pauli Murray, “was the cultural center of Durham’s colored community. Along Fayetteville Street, its main thoroughfare, were the library, the two fashionable churches – White Rock Baptist and Saint Joseph’s AME – the Negro college, numerous colored-owned business enterprises, Lincoln Hospital, and the spacious homes of many of the leading colored families.”

With the success of property sales in the Stokesdale area and the growth of NCCU, development west of Fayetteville began again in the 1930s. In 1927, the property of W. G. Vickers (retained as a single parcel near the center of the 1911 plat of Dunstan, Mincey, Roberson Lands) was subdivided into thirty-four parcels on the newly laid-out Dunstan Street. The area, platted as College Heights, was owned by T. D. Parham and Associates and was developed between the wars to accommodate the continually growing black middle-class in Durham. Unlike the Stokesdale area, Dunstan Street was developed on speculation, again financing through Mechanics and Farmers Bank or another local bank. Ralph Judd remembers his mother purchasing the completed house at 306 Dunstan Street from Ed Merrick, reportedly for $3300.111 This type of speculative development is consistent with the style of house on Dunstan, Minimal Traditional homes that are all variations on a single form.

The area continued to grow and prosper through the middle of the twentieth century. In 1947, Coy Phillips described the area: “Negroes who have attained positions of prominence in the business, professional, and social life of their race have created for themselves a rather selective community on the crest of a ridge in the heart of the southeastern part of the city. They occupy most of Fayetteville Street south of the negro business district, the east facing slopes between the Lincoln Hospital and the North Carolina College for Negroes and a few blocks that lie just west of the college campus... The largest concentration of [middle-class negro residences] is in the southeast on the rolling and well-drained land around and beyond the high-grade negro section.”112 The thriving center of the black middle class was known throughout the county, but by 1960, the end of the period of significance, the Hayti and Stokesdale neighborhoods had begun to decline and urban renewal would bring to a close seventy-five years of development. 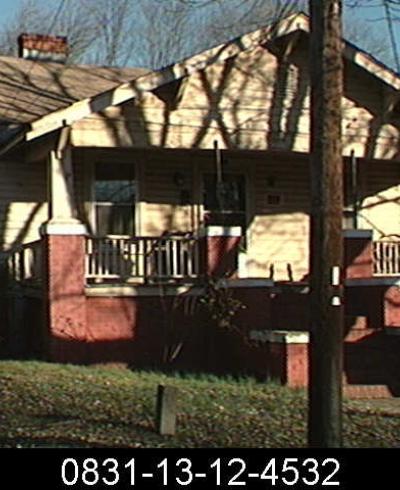 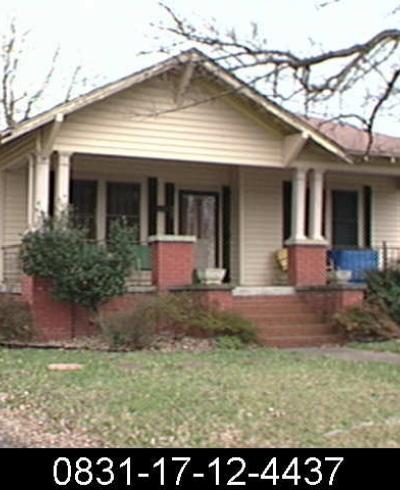 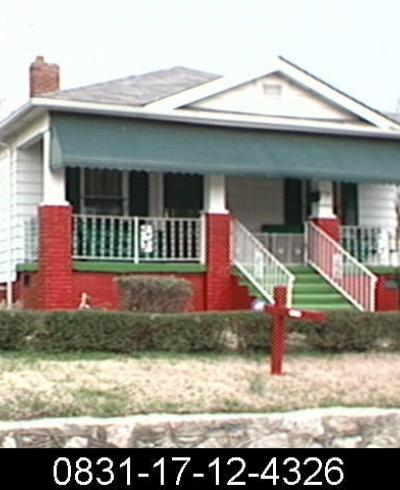 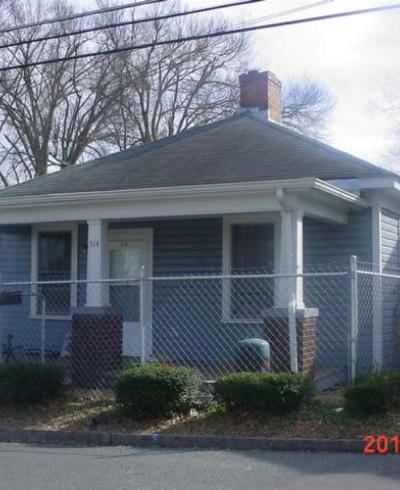 This one-story, hip-roofed house is three bays wide and triple-pile with a hip-roofed rear ell on the southwest corner and series of shed-roofed rear additions east of the ell. The earliest known occupant is Matilda Townsend (maid) in 1925. According to her obituary, she was employed by Professor C. W. Toms and later Mrs. J. A. Buchanan. Townsend remained in the house until her death in 1965.
Read More 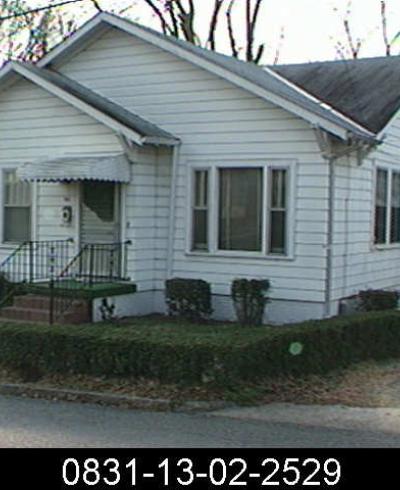 This one-story, side-gabled house is three bays wide and triple-pile with a full-width front gable and a hip-roofed bay window toward the rear of the east elevation. The earliest known occupant is Eula W. Perry (domestic) in 1935; county tax records confirm the 1935 construction date.
Read More 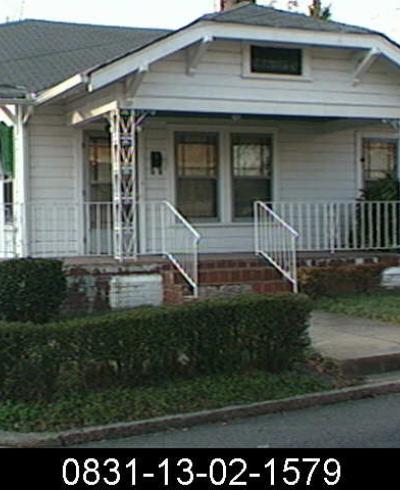 This one-story, clipped-side-gabled bungalow is three bays wide and triple-pile with a full-width, gabled rear ell. According to deeds, the Community Damp Wash Laundry & Corporation controlled the site through the 1920s and the Crystal Laundry is listed at this address in 1930. However, the property changed ownership in 1929 and county tax records date the current structure to 1930. The earliest known occupant is Carter C. Smith Jr. in 1935.
Read More 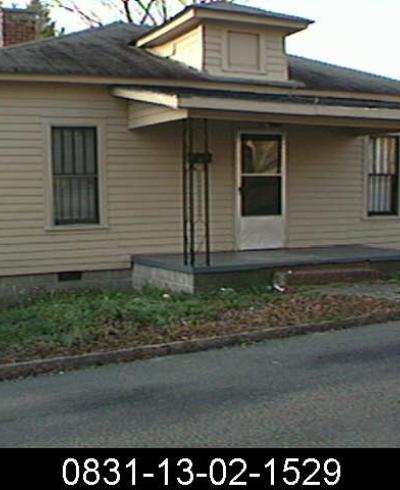 This one-story, hip-roofed house is three bays wide and double-pile with a hip-roofed front dormer. The earliest known occupant is Mary C. Evans (domestic) in 1925. When Evans died in 1958, the property was sold to the Durham Colored Library.
Read More 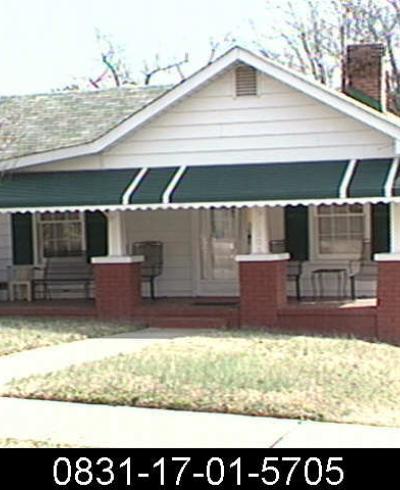 This one-story, front-gabled bungalow is two bays wide and triple-pile with a projecting side-gabled bay on the north elevation that is flush with the façade and a shed-roofed block behind that bay. County tax records date the building to 1925; the earliest known occupant is William Luther Palmer (reverend) in 1930; the Palmer family remained in the house through at least 1965.
Read More 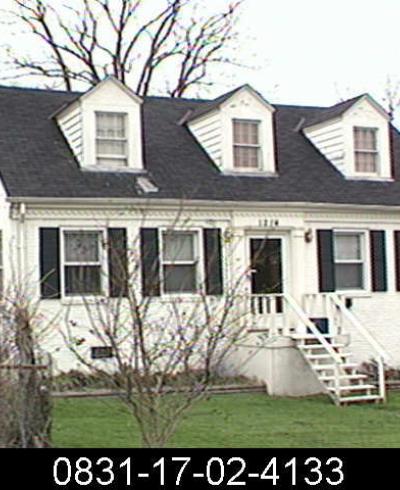 This one-and-a-half story, side-gabled Cape Cod house is five bays wide and double-pile with a full-width, gabled rear ell. The earliest known occupant (at 612 LINWOOD AVENUE) is William M. Rich (director of Lincoln Hospital) in 1945; the house remained on LINWOOD AVENUE through at least 1965.
Read More 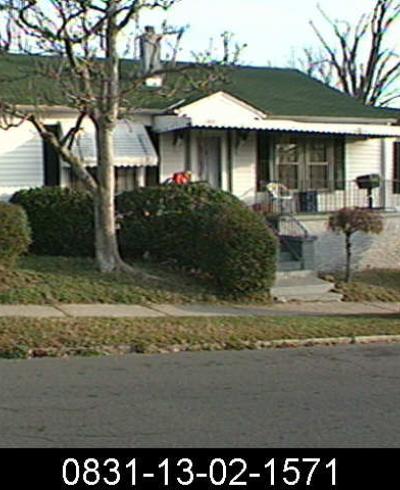 This one-story, side-gabled Minimal Traditional house is three bays wide and triple-pile with a side-gabled ell on the east elevation, an attached carport on the west elevation, and a gabled rear ell on the northwest corner. County tax records date the building to 1938; the earliest known occupant is William H. Curry (barber, Cosmopolitan Barber Shop) in 1940.
Read More