"Downtown East" is not a neighborhood per se, but simply a way to describe an area of downtown outside of the within-the-loop core created in the 1960s and 1970s that has transitioned dramatically over the course of the latter half of the 20th century.  The Durham Architectural and Historic Inventory grouped the entire semi-blighted penumbra around the downtown loop together as "CBD Frame," back in 1980. This was the area most dramatically affected by the Urban Renewal program of the 1960s, decimating blocks of neighborhood/commercial architecture. Each area, however, has seen differential fortune and attention in the ensuring years, such that it makes sense to treat them seperately.

The area I term "Downtown East" is bounded by Roxboro St. on the west, Holloway St. on the north, Elizabeth St. on the east, and the RR tracks to the south. This was one of the most affluent areas of residential development in Durham at the turn of the 19th century. Dillard Street was referred to as "Mansion Row," but equally impressive houses lined East Main Street, and nearly-as-impressive houses lined Liberty Street. The intersection of East Main and Dillard Street was particularly impressive.

From the 1980 Durham Architectural and Historic Inventory:

The majority of Durham's pioneering entrepreneurs made their homes around Dillard St., close to their businesses. As their fortunes grew, the size and stylishness of the houses became appropriately more elaborate. By 1881, residents of Dillard and Ramseur (then Raleigh Road) streets included J. S. Lock- hart, J. M. Reams, and A. Walker, all tobacconists. By the 1890s, a few houses built on Liberty St. in the prior decade had expanded to complete development of the street with fashionable, richly decorated houses. These houses were in the Italianate and Queen Anne styles that were so popular in Durham during the late 19th century. Their irregular forms incorporated such elements as towers with distinctive roofiines, carved sunbursts, bracketed lintels, and crosseted window surrounds. By the turn of the century, rich neoclassical motifs such as monumental columns, Palladian windows and carved swags were included in the decorative schemes. Two of the largest houses were owned by two of Durham's most prominent tobacconists, Capt. E. J. Parrish and Julian S. Carr. Parrish built his impressive Second Empire style house, with its three-story tower on the main facade, at the northeast corner of Dillard and E. Main streets; in 1893 he sold it to Richard H. Wright, who had disassociated himself from the Dukes and become a business associate of Julian S. Carr. Carr's house, situated just across the street from the Parrish-Wright House, occupied an entire block. In 1888, he replaced his 1870 Italinate house, "Waverly Honor," which was moved to a nearby lot, with the magnificent "Somerset Villa" designed by Albany, N. Y. architect, John B. Holcutt.

The epitome of the Queen Anne style, the mansion in polychromatic brick featured such wooden decoration as half-timbering and a spec- tacular 220-foot veranda that wrapped around two full sides of the house. Floors inlaid with a variety of wood, intricately carved mantels, numerous stained glass windows, and illusionis- tically painted ceilings adorned the opulent inte- rior. Greenhouses and service buildings stood to the rear of the main house, and across Ramseur St., Carr's gardeners transformed an entire block into a park.

In a sense, Carr's domain extended beyond his estate. Some of his neighbors were business associates or relatives, or both, so that this corner of the neighborhood may properly be considered as Carr's enclave. Dr. A. G. Carr, who lived just across the street in Waverly Honor, was his brother and William A. Guthrie, J. S. Lockhart and Capt. E. J. Parrish all were his brothers-in-Iaw.24 This northeastern portion of the CBD Frame was not solely occupied by large resi- dences. Several denominations built churches in the Dillard St. neighborhood, most of them in the area now included in the Central Business Dis- trict. Durham's Hebrew synagogue was situated first in a frame building constructed around 1905 in the 400 block of Liberty St. After 1913, the congregation built a brick synagogue one block to the north on Holloway St. The gable-front facade, evocative of late Romanesque architecture, was delineated with stepped cor- beling, a dentiled cornice and three arched doorways. In the 1960s, the congregation again relocated in Trinity Park and their Holloway St. building was razed. In contrast to the fashiona- ble houses that characterized most of the neigh- borhood, at the east edge near the railroad tracks, rows of small one-story one room deep frame houses were constructed for domestics and day laborers.

As early as the 1910s, the neighborhood began a gradual transformation. As the CBD expanded, the nearby textile and tobacco companies enlarged their plants and worker housing, and modern transportation provided easy access to one's business, many long-time residents moved to new suburbs.

This most dramatically affected East Main Street initially, where the elaborate Day-Fuller house was demolished to make way for the Masonic Lodge, the Astor Theater, and the Durham Sun Building. Somerset Villa was torn down around 1926, and developed with scattered one-story masonry commercial structures. The W. W. Fuller house, at the northwest corner of Dillard and E. Main streets, was destroyed to provide a site for the bus station in 1942. The AG Carr house, at the southwest corner of Dillard and East Main, was destroyed in 1947 for a Sears and Roebuck store.

Much of the housing along Dillard, Liberty, and N. Queen survived reasonably intact for the next 20 years, although historic photographs show that most of the very large houses had been converted to rooming houses or apartments. The 'next' generation of families that had lived in these houses were choosing to live in Forest Hills, Duke Park, or Hope Valley rather than in the city, so close to the commercial core.

The conversion of a large area to public housing in the 1970s, creation of parking lots, and the installation of institutional uses by Durham County continues to define the character of this neighborhood today, which shows some signs of life around where buildings were not destroyed on East Main, but is otherwise a gulf between the more revitalized downtown west of Roxboro and the revitalization of Golden Belt east of Elizabeth Street. 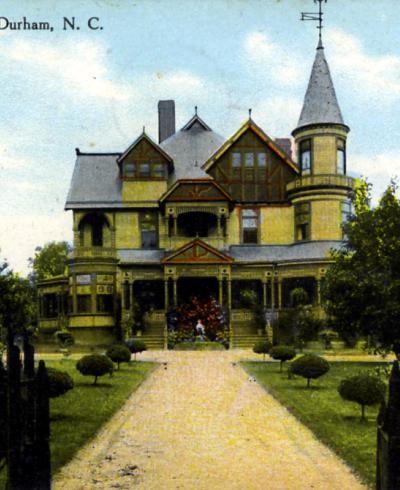 The grand house of Julian S. Carr - the most elaborate Queen Anne Victorian struture to have stood in Durham.
Read More 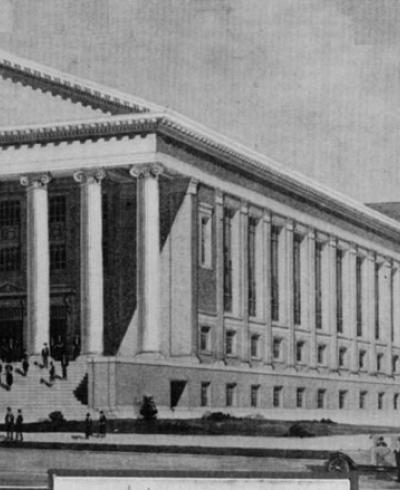 I've recounted the history of the First Baptist Church in Durham in detail here. The church decided to move from its N. Mangum St. location during the 1920s and construct a larger sanctuary on Cleveland St. Although Cleveland St. was a residential neighborhood of large well-appointed houses, it appears that there was a previous Primitive Baptist...
Read More 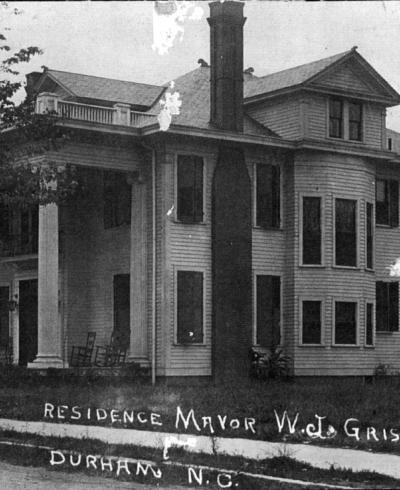 (Courtesy Susan Griswold Herst) The large house at 115 N. Dillard St., was built in a neoclassical revival style, and resembled the still extant 206 N. Dillard St. After ~1910, the house was home to the Griswold family. William J. Griswold was mayor of Durham from 1910-1912, and president of the Griswold Insurance and Real Estate Co. William...
Read More 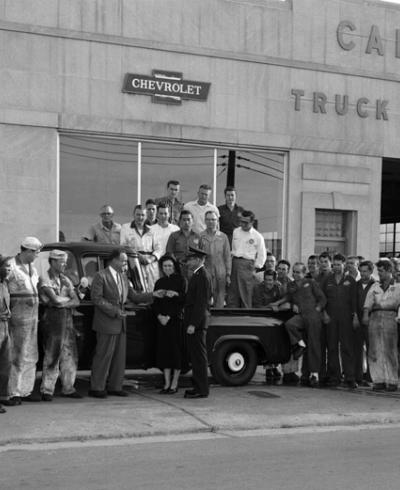 1950s (Courtesy Herald-Sun) The Carpenter Truck Garage was built in 1948 as an expansion of the Carpenter Motor Company dealership. A separate building from the 1910s-20s era original dealership, it is a fine example of an art deco facade with steel frame multilite windows along both sides of the building. As of 2013 the building was threatened...
Read More 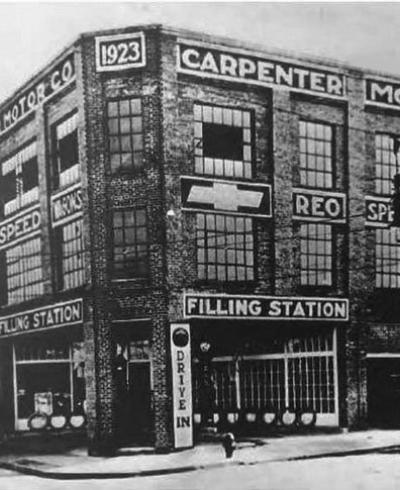 The Carpenter family firm started in 1893, when James E., John W. and Duane Carpenter formed a partnership to sell 'heavy groceries', feed, and buggies on Parrish St. In 1910, the firm began to sell Metz automobiles and Kohler trucks out of a catalog. In 1912, the Carpenter brothers established the first Ford and Dodge dealership in Durham. In 1915, they switched their allegiance to Chevrolet, and remained a Chevrolet dealership from that point forward.
Read More 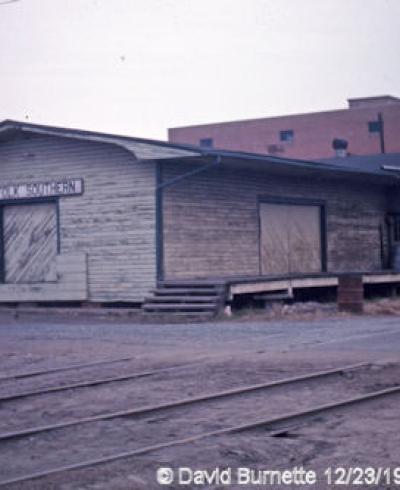 The Norfolk Southern Railway depot in 1966. It was located within the wye tracks of the Norfolk & Western connecting Duke Belt Line at Seaboard Air Line Railroad's Durham Yard.
Read More 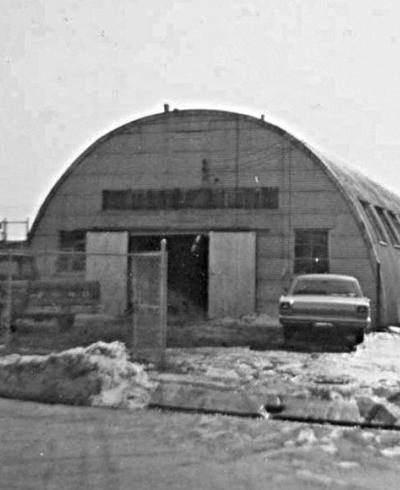 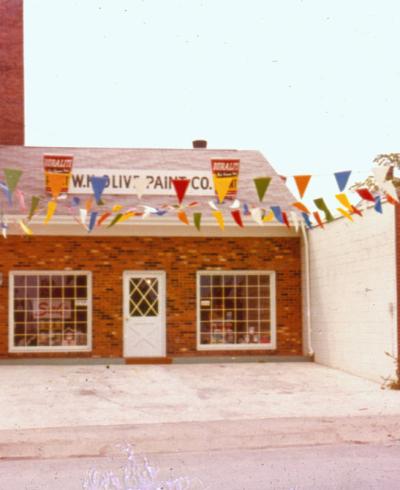 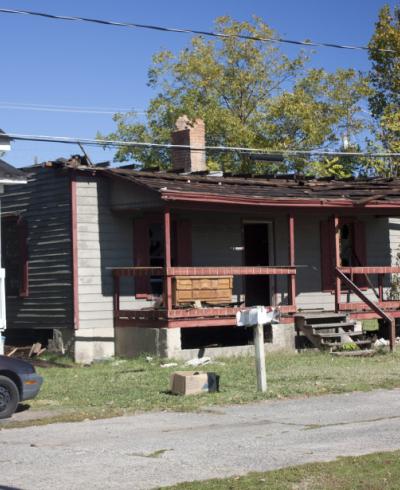 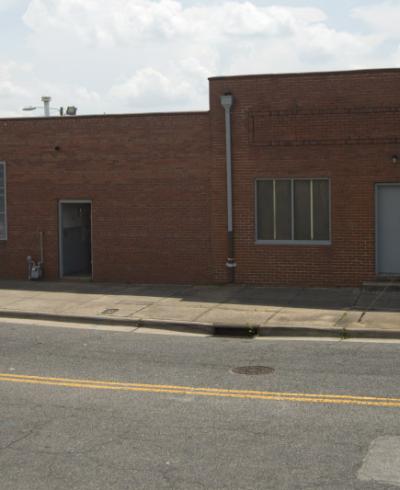