The Norfolk Southern Railway depot in 1966. It was located within the wye tracks of the Norfolk & Western connecting Duke Belt Line at Seaboard Air Line Railroad's Durham Yard.

In order to conduct interchange business with Durham's other rail carriers, NS trains would operate over the Durham & Southern Railway's (D&S) mainline through a trackage rights agreement. This was done over another spur running Northeast from Keene Yard to the D&S then over the D&S tracks into Durham. The D&S tracks crossed the Southern Railway tracks and connected with the Seaboard Air Line's Durham-Henderson, NC line which ran parallel to the Southern's through the city. This location is known as D&S Jct and from there NS and D&S trains operated into the SAL Durham Yard. NS maintained a freight depot that was located within the Norfolk & Western Railway's wye near the SAL yard.

Ironically, the NS depot was nowhere near the railroad's own tracks or facilities in Durham. Norfolk Southern was bought by Southern Railway in 1974. The depot most likely did not survive too much longer afterward since Southern already had facilites at it's East Durham Yard. The location of where NS depot stood is now Fayetteville Street. Southern abandoned much of the old NS tracks in the mid-1980's and the right-of-way is now the American Tobacco Trail.

The NS depot is seen in the center left in this 1950s aerial. The Seaboard Air Line yard is to the right. The Southern mainline is running parallel to the Seaboard yard and E. Pettigrew.st

Below, late 1960s/1970 view, with the depot demolished. Fayetteville Street has been carried over the freeway, but does not cross the railroad tracks in this view. Below, the new crossing being created in 1971 for Fayetteville Street.

The NS depot is now gone in this 1980 view prior

The NS depot is now gone in this 1980 view prior to the construction of Fayetteville St. 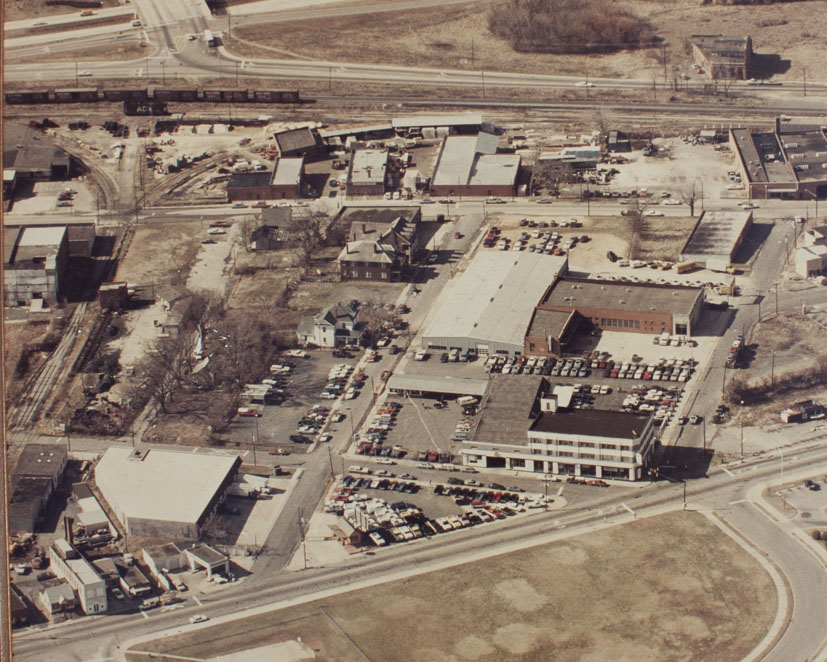