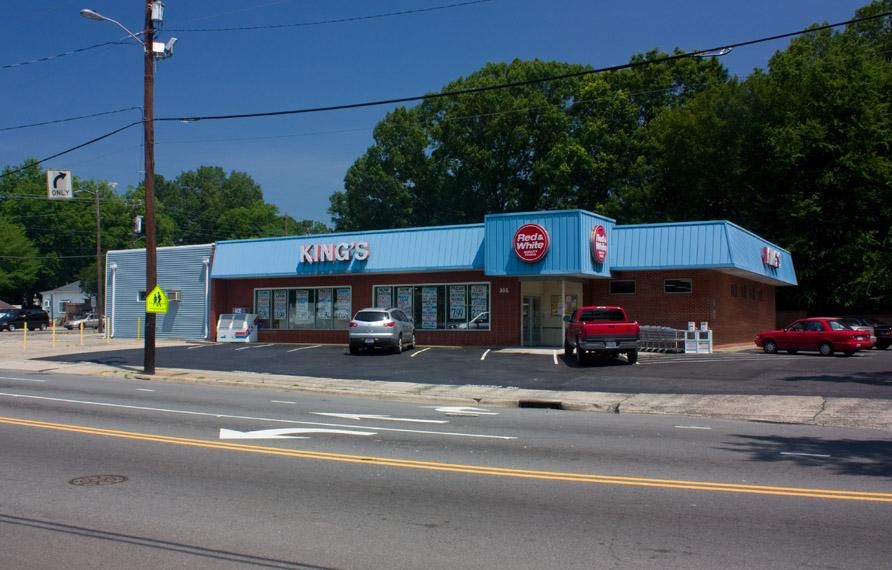 As far as I know, the last of the once common Red and White grocery stores in Durham is King's, at North Roxboro and East Club Boulevard. It's likely the oldest continually operating supermarket left in Durham.

Opened by William Brinkley Sr.and his wife in 1956, King's was one of a new wave of supermarkets to open in the 1950s, and part of the development of Club Blvd. and Roxboro spurred by the construction of the US 70 bypass in 1950. Within 6 years, there were 3 grocery stores at this corner - King's, the Piggly Wiggly on the southeast corner, and Fowler's near the southwest corner.

The late William Brinkley Sr. opened the doors of Kings Red and White back in October of 1956. His goal was to provide quality meats and fresh produce to the local residents of the greater Durham area. Over fifty years and three generations later his mission is still being carried out. King’s (which is operated now by his wife Oprah King and their two sons Brink King Jr. and Ronnie King), is still serving the customers and local patrons of not only Durham, but all up and down the East Coast.

Today, only King's survives, and it has cultivated a very loyal following - being the oldest supermarket doesn't mean you can't have a Facebook page....

We shop there regularly. It is a friendly place, a bit of a blast from the past, and I can find items there that I cannot find elsewhere.

King's seems to get it: I think they understand their shoppers are different, so they're adding things like Maple View farms milk and bread from the 9th Street Bakery. I hope it works, and I wish them well.

Joe, your right. They do get it...
There is something about that place that you just have to adore. It has that small store appeal, and if you go there a time or two, they remember you. Very friendly and have some of the coolest items. Its amazing I can go to a Super Walmart with 20 registers, and it take longer to check out than in Kings with just 2 registers.

And do you know of any other store where you can get your meat cut to order - or where they send flowers to the funeral of a long-time customer?

It is a great place. When my wife and I were younger with our daughters, they would ride down the conveyor belt and Mrs. King would "ring them up". Now my youngest daughter has her own catering business and shops there all the time. Best tomatoes and prices in town.

Local veggies, best tasting meat, best cheese and best pimiento cheese by far,...try it "hot"! Voted best butcher shop 2010 by The Independent and you'd better believe it! Ask the butcher how to prepare anything he cuts--his suggestions are simple and flawless and delivered with a smile. PLUS King's offers the best price on that hard-to-find item: sugar cubes!!!!!!!!!!!!!

We've shopped there many years. The Kings are so nice and provide customers with excellent service. There's a wide variety of items and the produce is always fresh and of highest quality.
We love stopping in on the way to visit family when we drive up from Wilmington, NC several times a year. King's is awesome!

I love this store - drive from Creedmoor to get fresh meat and my favorite BBQ sauce.   Friendly people, good prices, and superb service!

Absolute best meat in the Triangle. My family has been buying chickens and beef from King's for years (can measure purchases to date in tons, not pounds....). Really hope people keep patronizing it so the doors stay open.

My grandfather owed the gas-service station on the opposite corner from Kings, "Barnhill's Gulf" and I'll never forget the King family who donated so much food when my grandmother, a loyal customer, died in 1999.

I shop at King's almost every week. I buy most of our produce and some of our meats here. The folks are always friendly and helpful.