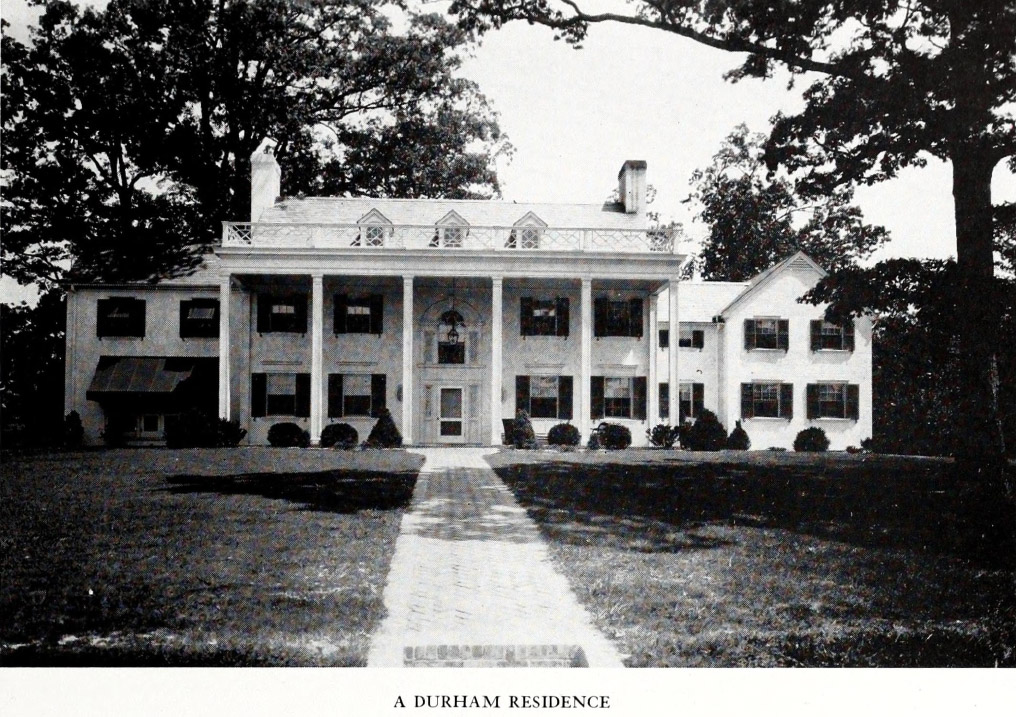 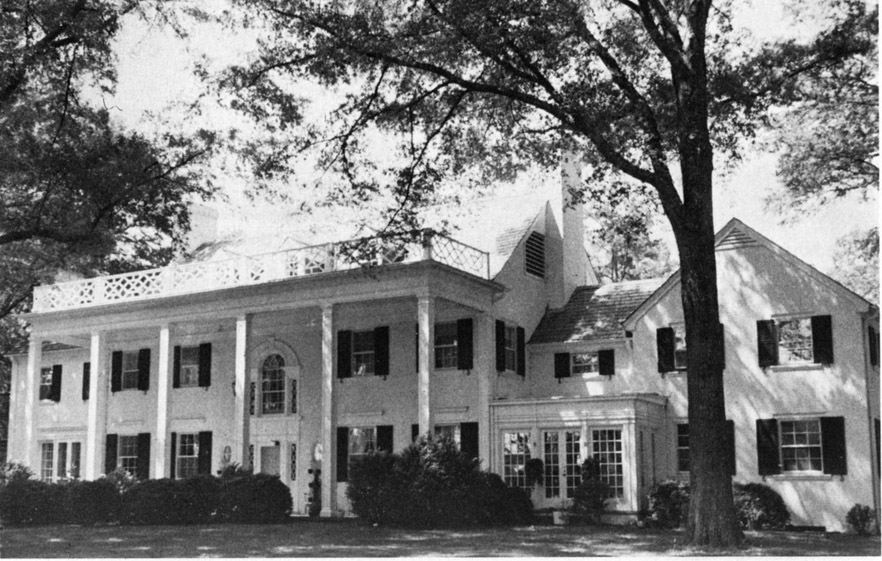 From the 2002 Preservation Durham Tour Booklet:

In 1932, construction magnate and decorated war hero Hubert Teer had this mansion built in Durham's new country club subdivision. Here Teer and his wife Mary raised their family. Following Mr. Teer's death in 1969, his daughter, Mary Teer Barringer returned with her husband Russell, where they, in turn, raised their family. The home of their son Stephen is also on today's tour (the Pearlzweig House). The Hubert Teer House has become something of a Hope Valley, if not a Durham, landmark. It was designed by Durham architect George Watts Carr and built by contractor George W Kane, also of Durham. The house looks more like an 18th century plantation home than the modest "spec houses" Mebane and Sharpe built just around the corner and across the golf course. Interestingly, the versatile Carr designed those houses too. Although the house represents a break from the old English theme the developers originally envisioned for their new subdivision, the size of the house and its com- manding presence clearly demonstrated that Hope Valley had become the affiuent neighborhood they had hoped to create. It was among the first houses in Durham to show the influence which John D. Rockefeller, Jr.'s restoration of Colonial Williamsburg had on American residential design. Rockefeller's interest in Williamsburg began in the mid-1920s. By 1932 his interest had become a passion and he was pour- ing money into the painstaking reconstruction of the colonial town. The proj ect fired the imagination of architects all over the country. Soon, designs for Colonial Revival homes based upon Virginia originals filled ladies' magazines. 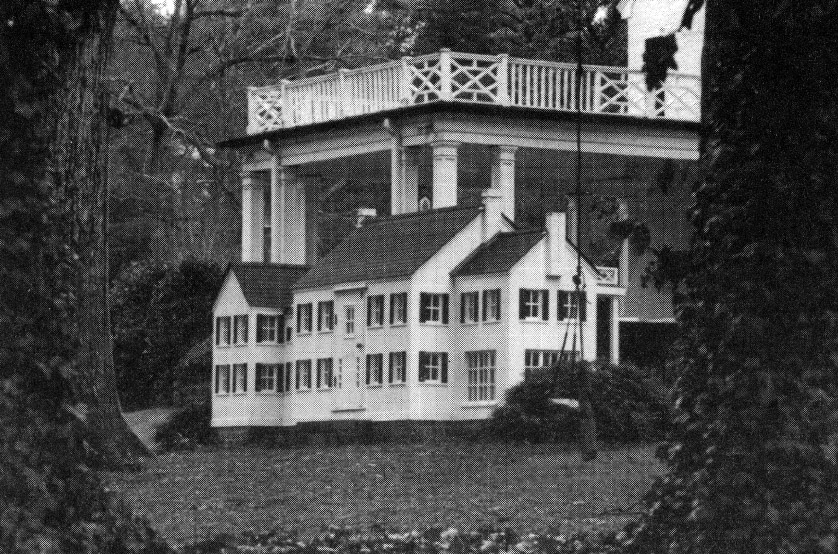 Unlike earlier manifestations of the Colonial Revival style in America, this new expression emphasized authenticity, symmetry and dignity. The Teer House shows the strong influence of George Washington's Virginia house at Mount Vernon. The founding father's home was so popular and so deeply rooted in the American imagination that two replica ready-to-assemble kit versions of Mount Vernon were included in the 1931 Sears Roebuck and Co. catalog. The Teer House has a full height, full-facade, classical porch dominated by a colonnade of six box columns. The porch covering the colonnade is formed from a shed extension from the side-gabled roof. The fine Chinese-Chippendale balustrade above the porch is a direct link to the home's 18th century antecedents. Notice too, the single-story side extension to the left (west) of the main house. This has a roofline balustrade which ties it stylistically to the house, covering an outdoor living room with fireplace. Added just three years ago by the Barringers, this space was originally a patio/barbeque area. One-story wings sometimes existed in the Georgian proto- type for this house, but they would have been additions also. The copper-roofed bay window, which can be seen on the west side of the entry door, was also added during the recent remodelling. To the right, another extension comprising the kitchen and ancillary rooms were part of the original design. The single-level breakfast room located immediately to the east of the front porch was added by the Teers after the original building was completed but was recently updated and renovated by the Barringers. Behind this addition, a side gabled extension ends in a front-gabled return, yielding an overall appearance of a tightly clustered group of outbuildings on a plantation property. Such clusterings of buildings give the property a sense of having been built over time.

The Teer House exhibits other details that are typical of Colonial or Classical Revival architecture: a decorative Georgian-style main entry, that is, a door with side- lights and a horizontal over-door, elaborately carved, but without fanlight. Over this, at the tipper story, is a classical tripartite Palladian-style window. The remaining upper-story windows on this facade are symmetrically arranged following classical tradition with a set of two on either side of the center of the house. They are double-hung sash windows with three-over-three panes in each sash, a pattern not typical for authentic Georgian residences (six over nine for an upper story), but consistent with 20th century neo-colonial practices. Since 1969 Mrs. Barringer has, naturally, redecorated most of the interior of the house, with the exception of the main foyer and stairs. In addition to the Chippendale iron baluster rail, the original scenic Zuber wallpaper imported from France is still there. Mrs. Barringer has fond memories of her mother hanging this paper when the house was new.

Structurally, little has changed about the house but some improve- ments were made a few years ago. A new kitchen, breakfast room and sitting room were created according to the designs of Dan Addison whose home (the Hussey House) you may also see on this tour.The breakfast room had been enclosed depriving the interior of light. As with the Addison's house, walls were removed to integrate the spaces and bring sunlight to the interior. An informal sitting room was created adjoining the kitchen. On the opposing side of this wing (north) facing onto the private garden area, an enviable butler's pantry was created out of an unused space. On the second floor landing a second guest bedroom was created out of a former ser- vant's room which had been accessible only from a back stairway. The two guest bed- rooms are linked by a bathroom shared between them, a device commonly seen in Edwardian homes in England when internal plumbing was the new big rage and dressing rooms were converted to their new modern purpose. An elegant wood-panelled study with adjoining dressing room was created for Mr. Barringer out of a child's bedroom. The famous dollhouse replica of the Teer house was a gift to Mary-who did not care for dolls much-on her fifth birthday. 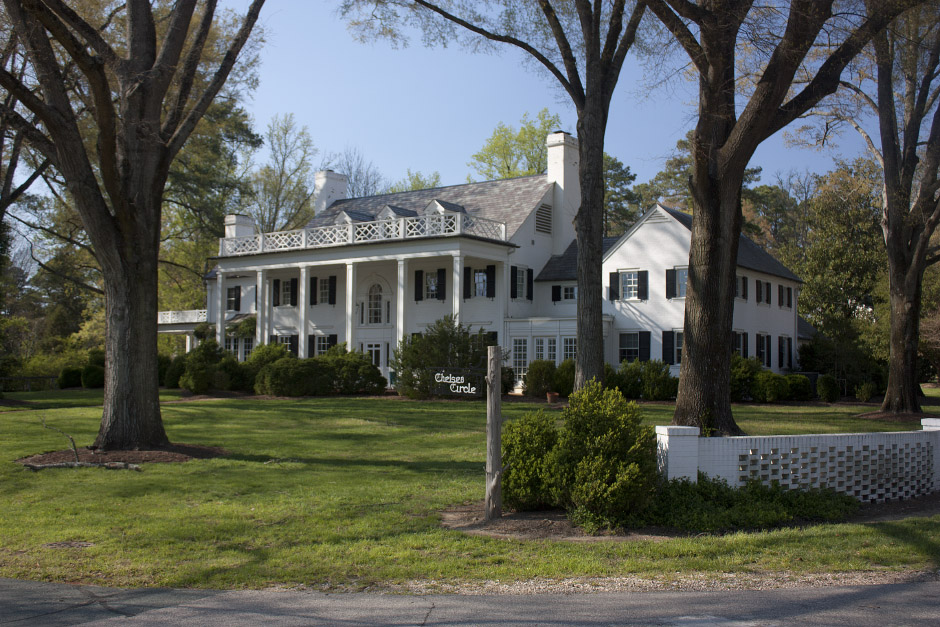 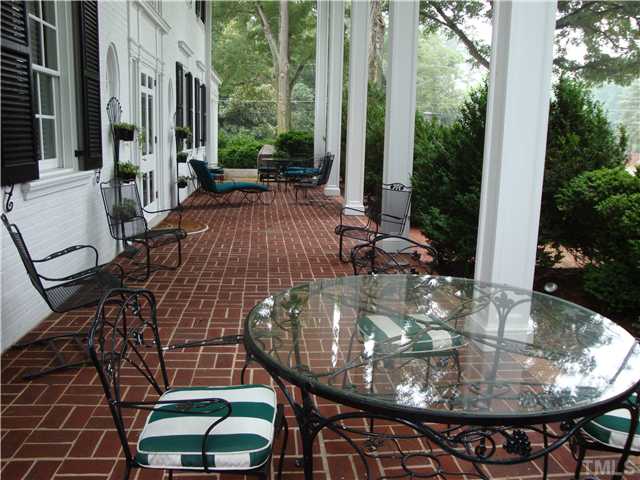 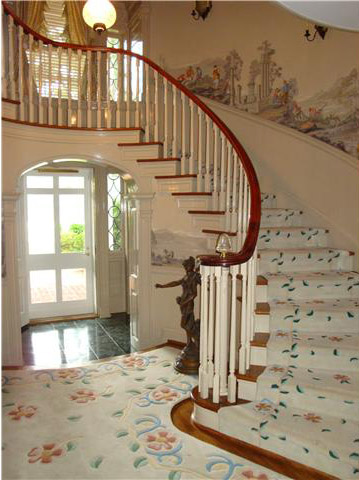 Hello, I was wondering if

Hello, I was wondering if this space was available to rent out for a wedding. My client is looking to have an intimate wedding ceremony and reception in January and this house could be the perfect location. Please let me know if you provide venue services. Thank you.

Gary, I have an idea for a

Gary, I have an idea for a new business.
Just kidding.
Uh, "Residential"
Use: "Residence".
Pretty clear to me.

I have always admired that house. It's a real head turner for anyone driving past.