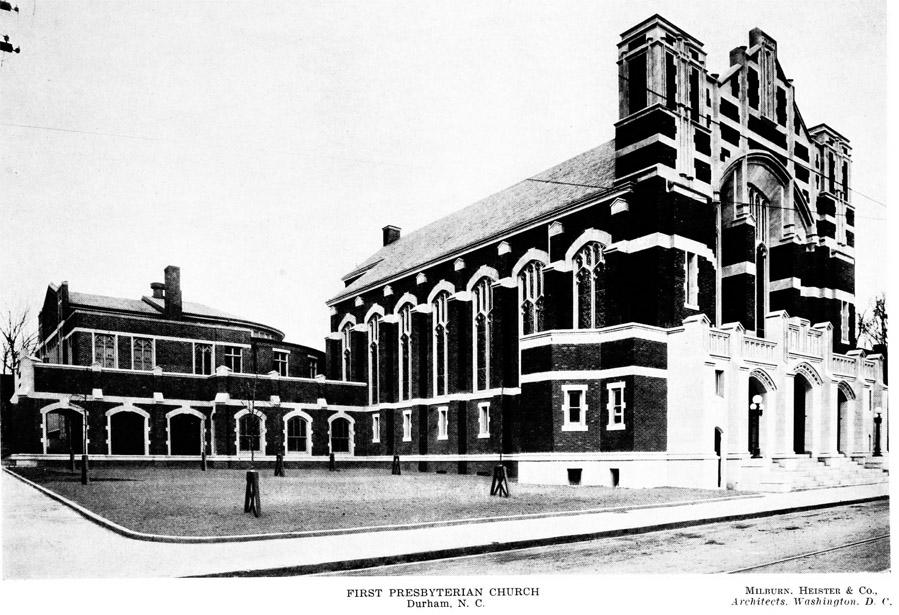 The First Presbyterian Church began when Dr. Richard Blacknall moved from 'Red Mountain' (Rougemont) to Durham in 1860 and persuaded Revs. James and Charles Phillips to come from Chapel Hill to hold sermons in the Trinity Methodist or First Baptist churches. His wife organized Sunday school classes in the First Baptist Church as well. The congregation was organized in 1871 during a meeting of the "Orange Prebytery" which met in the old Durham Academy building (no relation to the current school) on Chapel Hill St. to form a church composed of 11 members.

The church functioned for several more years without a structure of its own, until it was able to purchase a site at the corner of the Roxboro Road and Main St. in 1875 and construct a small frame church building. 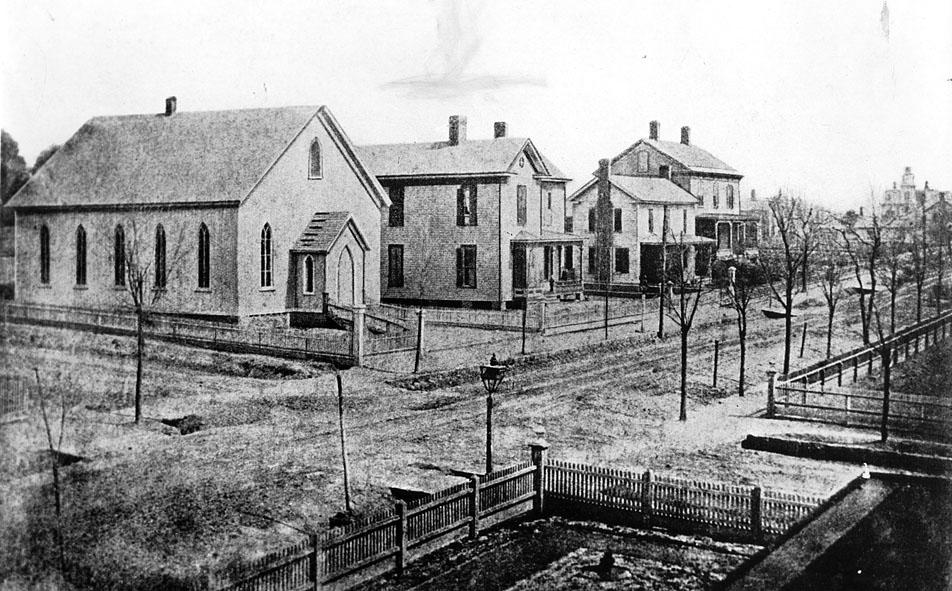 Looking northeast ~1880 at the intersection of Roxboro and Main, as well as the Presbyterian Church and surrounding houses. Many of these simpler frame houses would later be replaced by more ornate structures. You can note the ornate E.J. Parrish House in the distance to the right side of the picture.
(Courtesy Duke Archives)

George W. Watts (who funded the construction of Watts Hospital - twice) was an early member of the church congregation, and helped fund missionary trips to Cuba, Brazil, Korea, various parts of Africa, and other parts of the U.S.

By 1890, this structure was no longer adequate to hold the congregation, and new Gothic Revival church, with a 70 foot tower, was constructed on the same site to replace it, with the financial assistance of Mr. Watts. 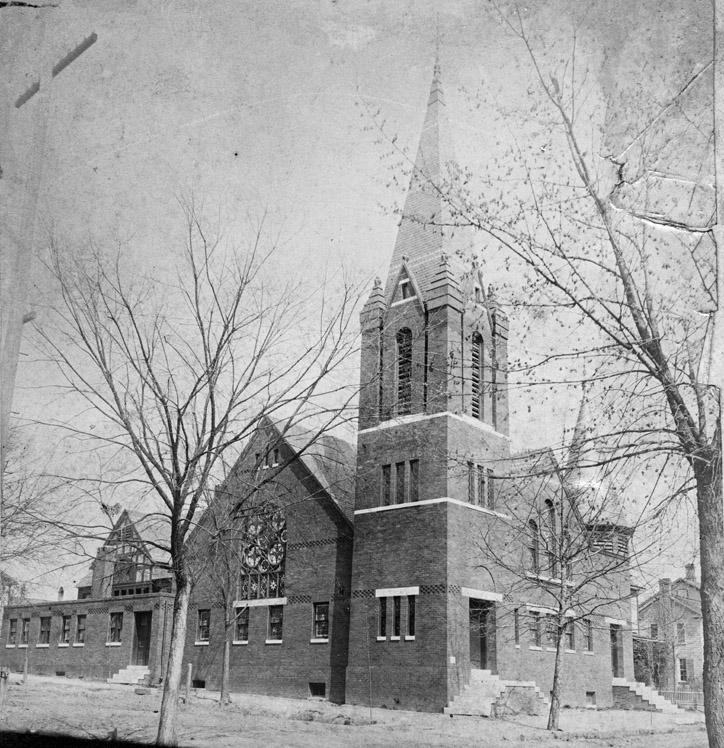 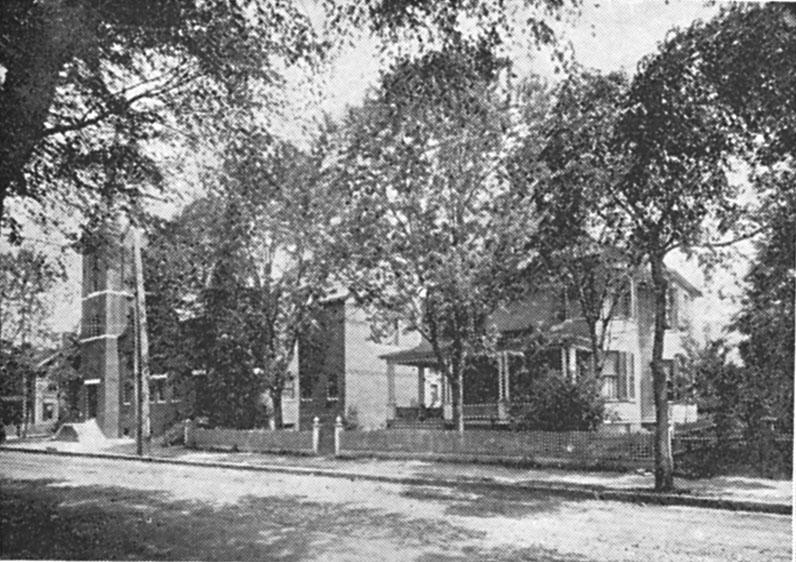 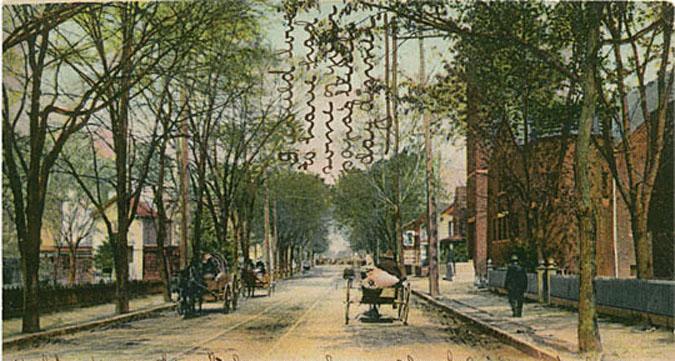 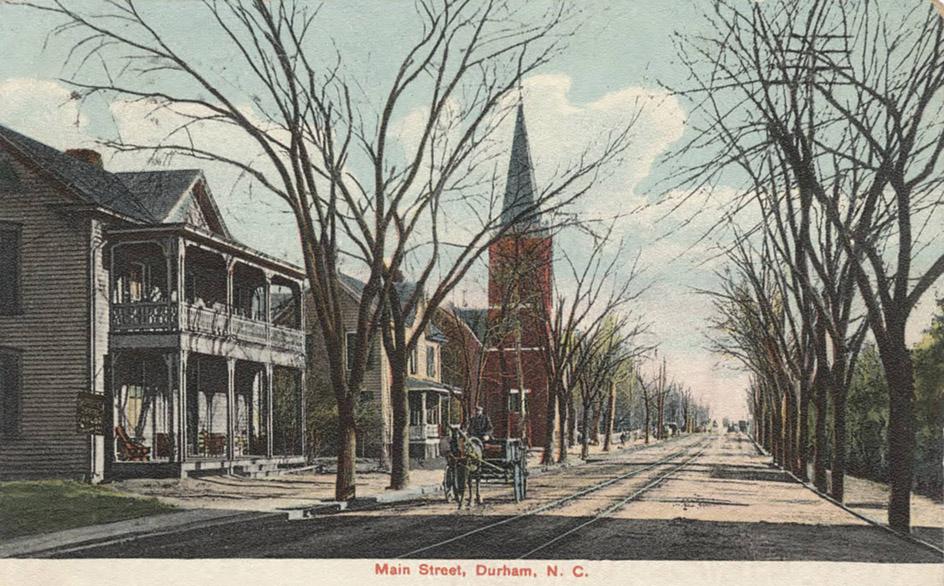 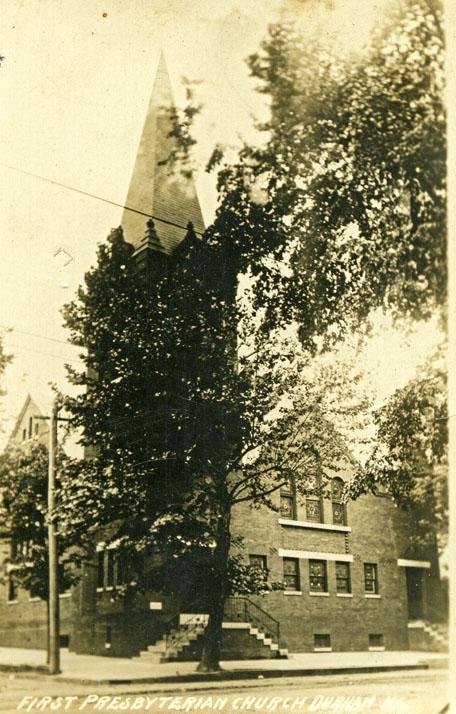 In 1916, the church hired architects Milburn and Heister (Carolina Theatre, Union Station, etc.) - better known for their neoclassical designs - to design a new Gothic Revivial structure for them to replace the previous brick structure. The result was an impressive structure of contrasting brick and stone and deeply recessed stained glass across the front facade. 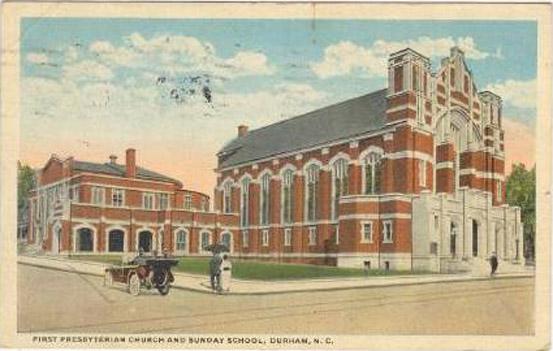 In 1922, the church added a 'church house' adjoining the structure to the east. 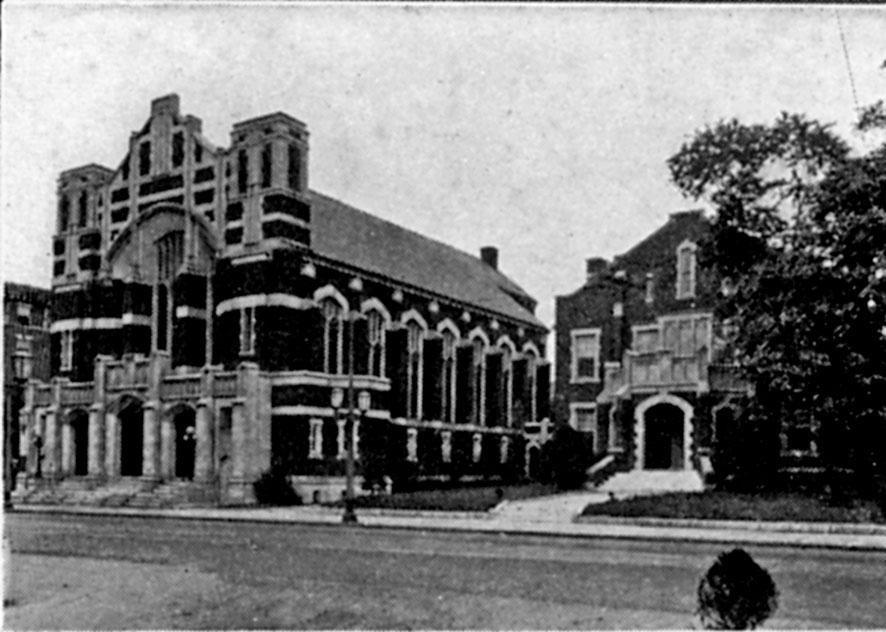 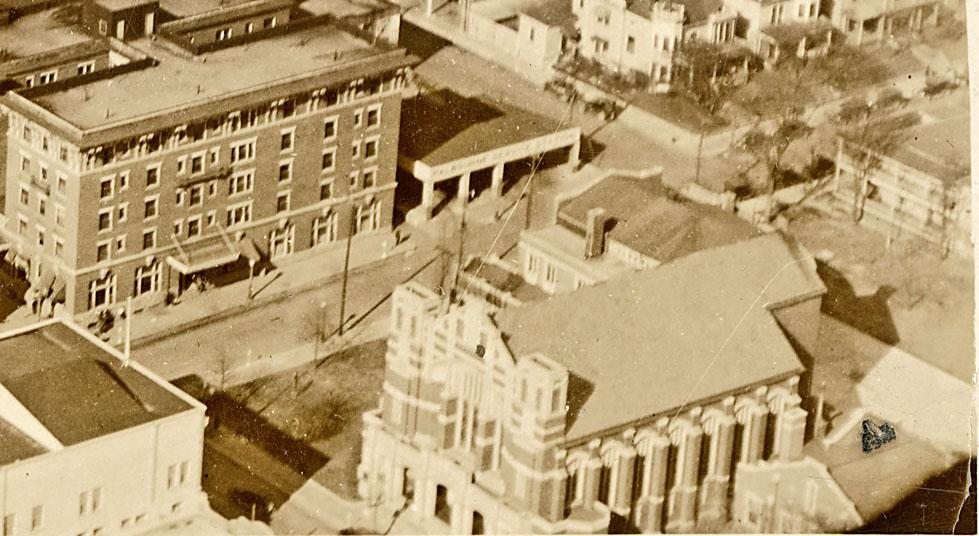 A partial view of the chruch from the air, looking northwest, 1924. The Eligibility building is to the left, the Malbourne Hotel directly across Roxboro, and the Afton Inn and other large residences along Roxboro are visible moving towards the top of frame.
(Courtesy Duke Archives)

The congregation continued to grow throughout the 20th century. 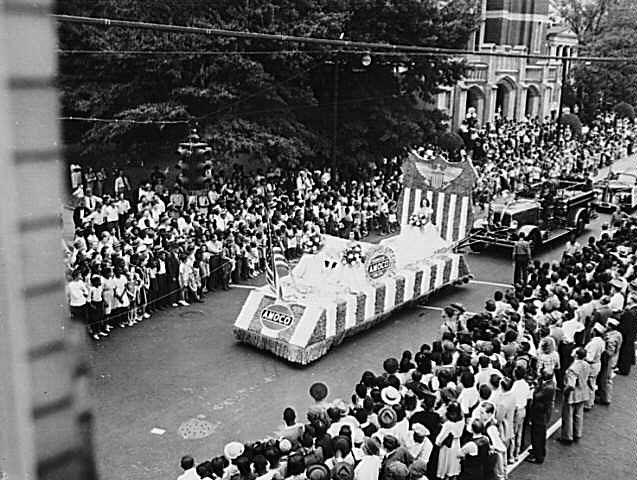 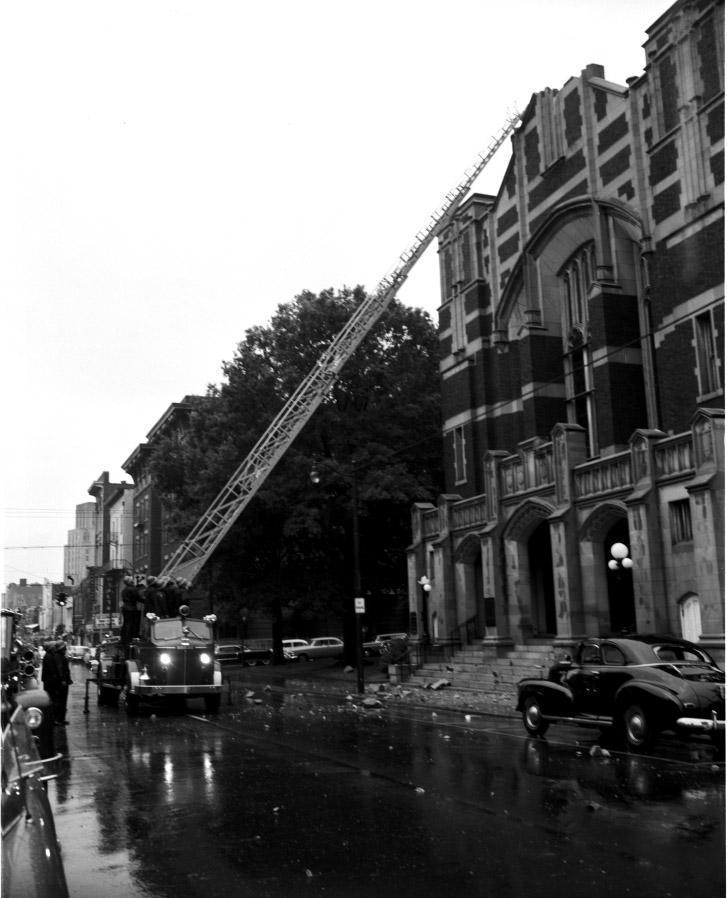 As with the remainder of the downtown churches, the 1950s and 1960s were a difficult period, in which suburban migration changed the neighborhood considerably, and the natural base for the congregation. The surrounding residential neighborhood was demolished in the late 1960s by the City of Durham using urban renewal funds. The church's website notes that the congregation voted to stay downtown during this period.

First Presbyterian demolished part of its own structure in 1963, destroying the rear wing of the building (I'm not sure what its function was) that is visible in the 1924 picture above. 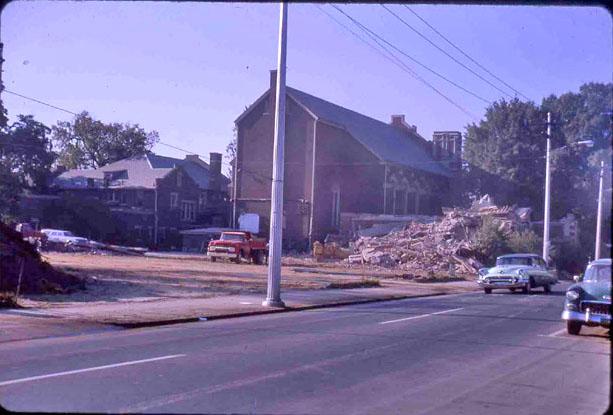 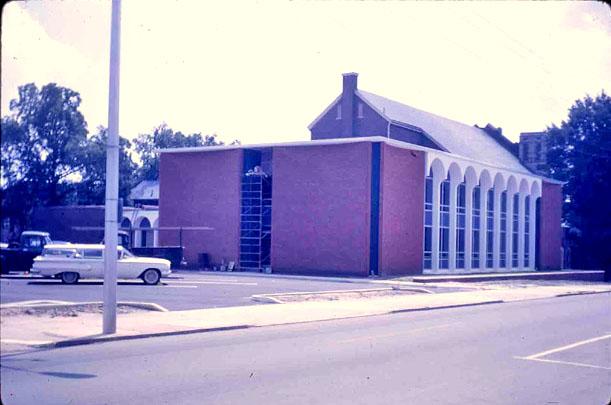 Along with St. Philip's, Trinity Methodist, and First Baptist, First Presbyterian was a founding member of Congregations in Action, which sought to provide assistance to residents of Oldham Towers and the Liberty St. Apartments.

First Presbyterian continues to be an active congregation downtown, involved in numerous religious and civic actvities. 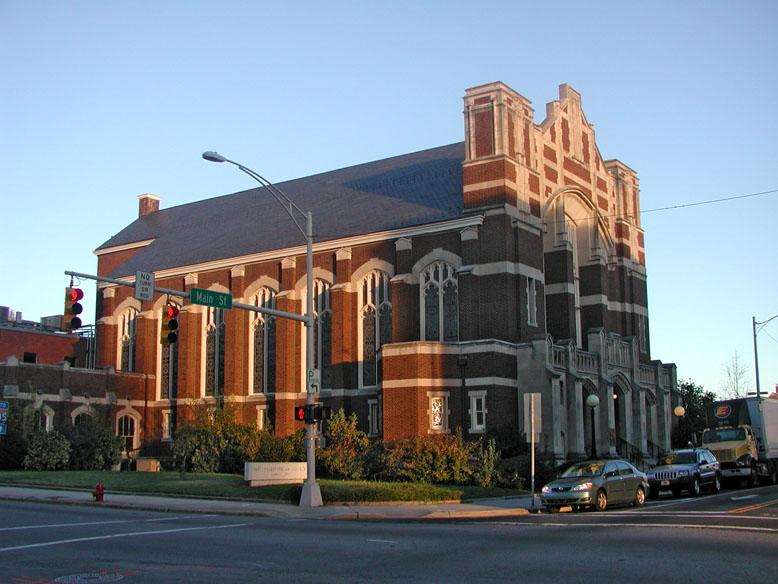 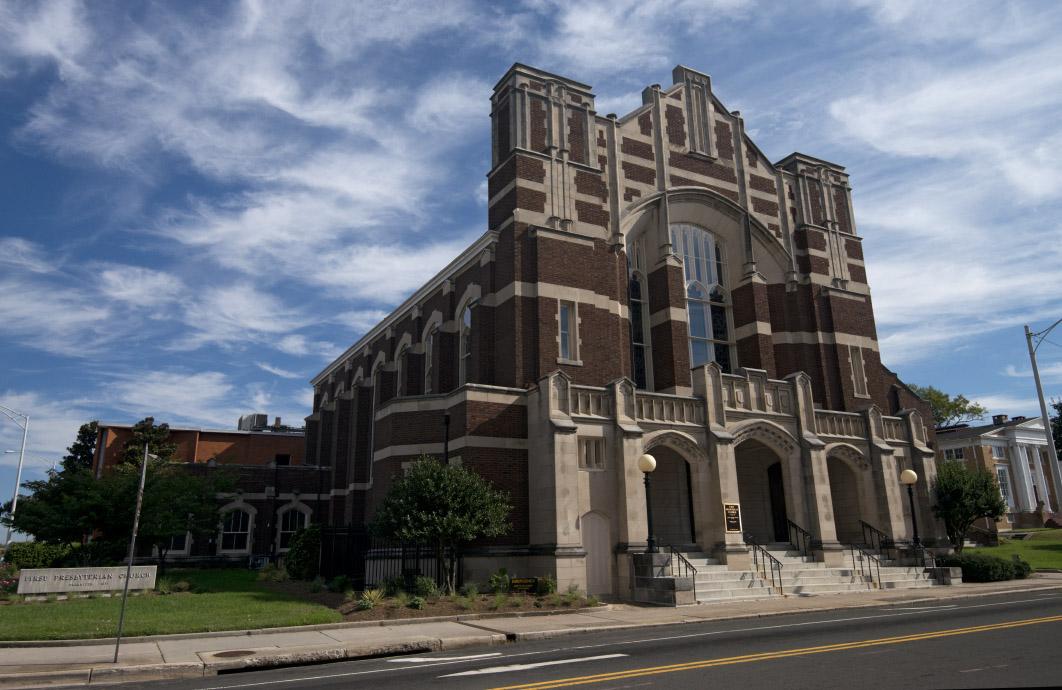 Friends, we are currently reviewing our history ( as part of a process to call a new pastor) and would love to reprint some of the many photos here for use on our church's bulletin board . Who can give permission for the photos to be reprinted for such use? You can call me at 919-682-5511 ext. 215 to discuss or send an email. Thank you