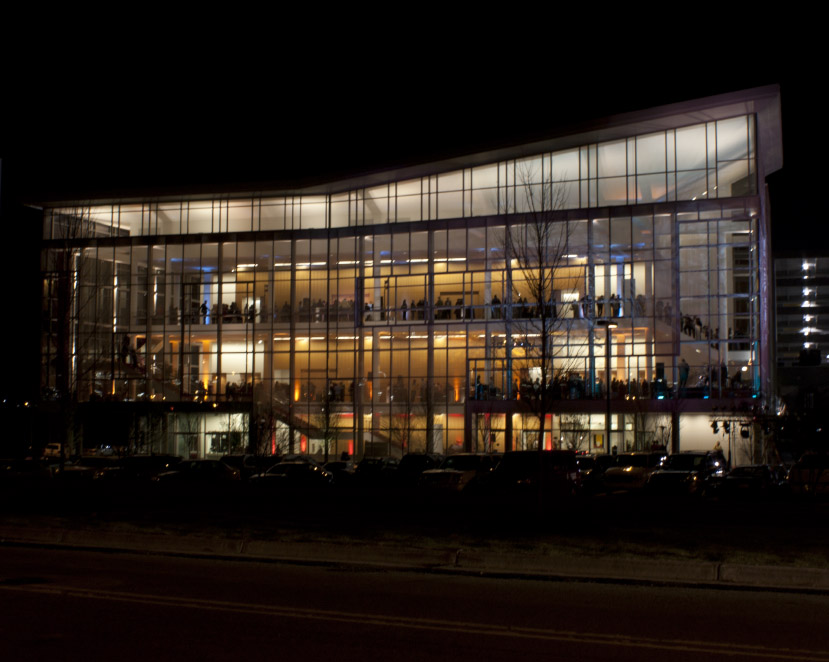 The site of the $44 million Durham Performing Arts Center grew as a mixture of industrial and residential uses, located just south of the main railroad depot and just east of Blackwell's Durham Tobacco Co.

Julian Carr established the "Carrolina Roller Mills" - a flour mill - in 1902, incorporating the concern on April 21, 1902. The firm was capitalized at $49,000. A frame mill building was constructed at the southwest corner of McMannen and Vivian Streets in 1902. It could produce 200 barrels of flour a day.

A poor reproduction of the letterhead for the company, showing the original buildings.
(Courtesy The Herald-Sun)

Growth of the company necessitated an expansion; in 1917 a five-story brick building was constructed to the south of the original frame structures, and machinery in the plant was upgraded. 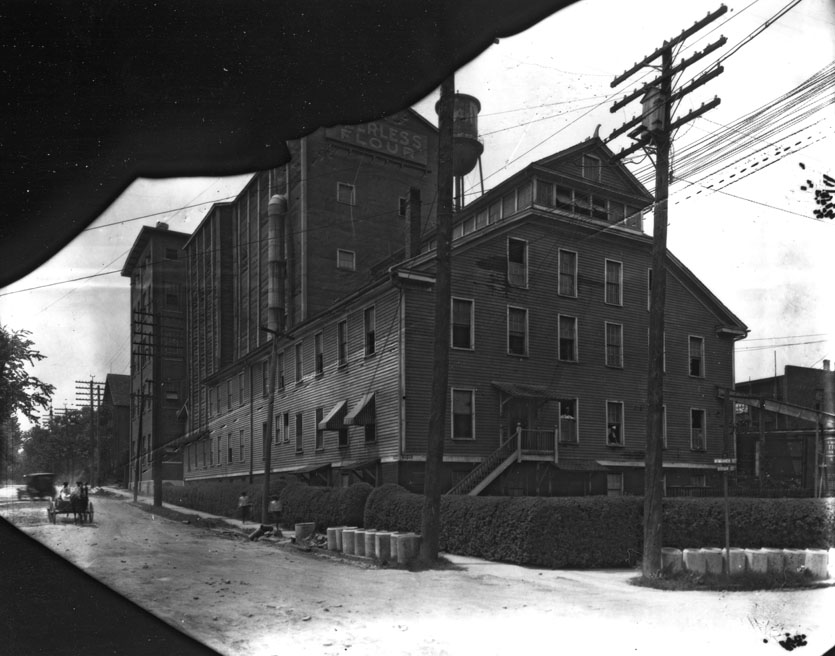 Above, the Austin-Heaton Company - looking south-southwest down what is now Mangum Street from the corner of Vivian and McMannen (now Mangum) circa late 1910s.

A tall concrete tower and - I'll call them silos, but perhaps that isn't the correct term - were built in ~the late 1940s, which increased wheat capacity to 112,000 bushels.

In 1953, the mill produced "eight grades of wheat flour and three types of wheat mill feed". Its distribution territory included North and South Carolina as well as parts of Georgia and Florida. Its most well-known brands were "Peerless", "Occoneechee", "Bon Ton", and "Cream of the West". The company also manufactured a breakfast cereal known as "Wheatone".

It was noted in 1953 that "Austin-Heaton [ground] choice soft winter wheat from Pennsylvania, Maryland, Ohio, and other states." At that time, Arnold Briggs was president, Hargrove Bowles, Jr. the vice-president, and WA Gooch the treasurer. 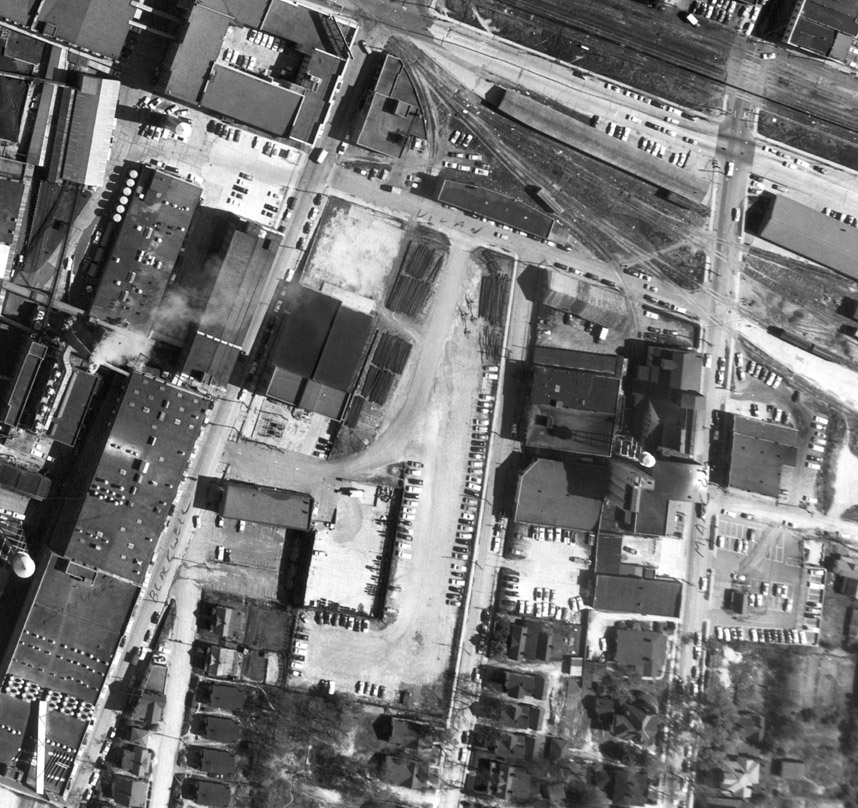 Below, a 1959 shot of the building from the tracks. 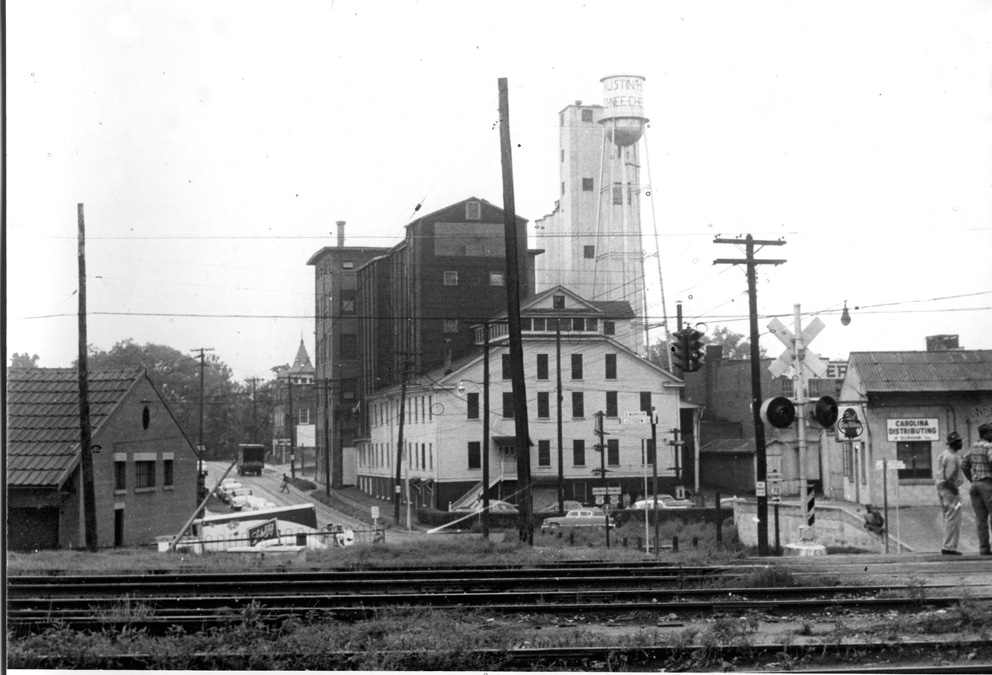 By the early 1960s, this area was in the sights of the Urban Renewal-ites, The below shots were taken for an urban renewal appraisal, to take and demolish the mill. 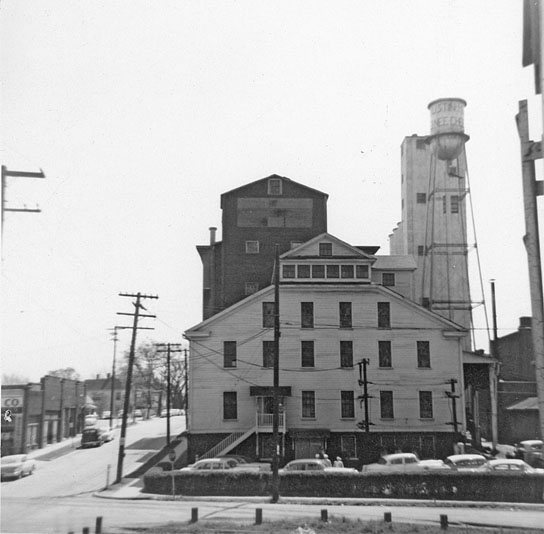 The view from across Vivian St., looking south, 1963. The frame structure in the foreground was the original Carrolina Roller Mills building. 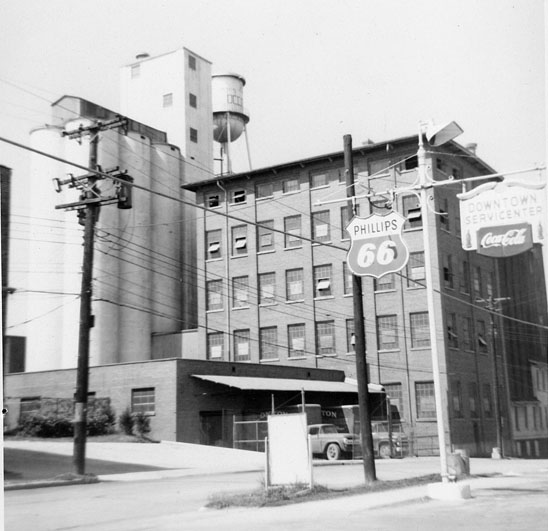 The southern portion of the property and 1917 addition from the east side of Mangum, looking northwest. 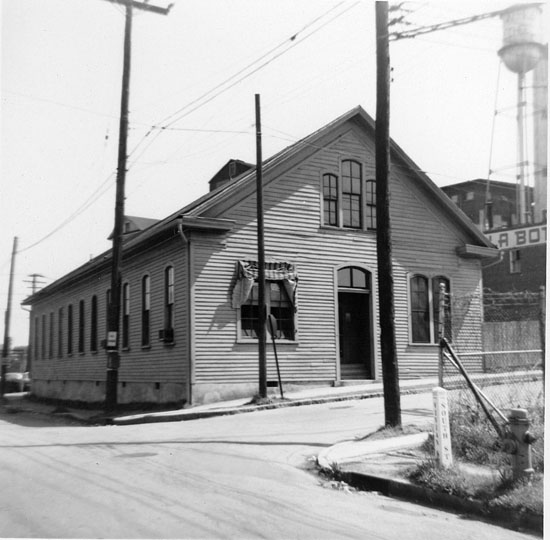 The original office building, at the southeast corner of South St. (which used to extend all the way to Pettigrew) and Pettigrew, looking east.

The Pepsi Cola bottling plant was also located at the southwest corner of this site - more about that portion here.

By 1968, the government had bought these buildings and began to demolish them. 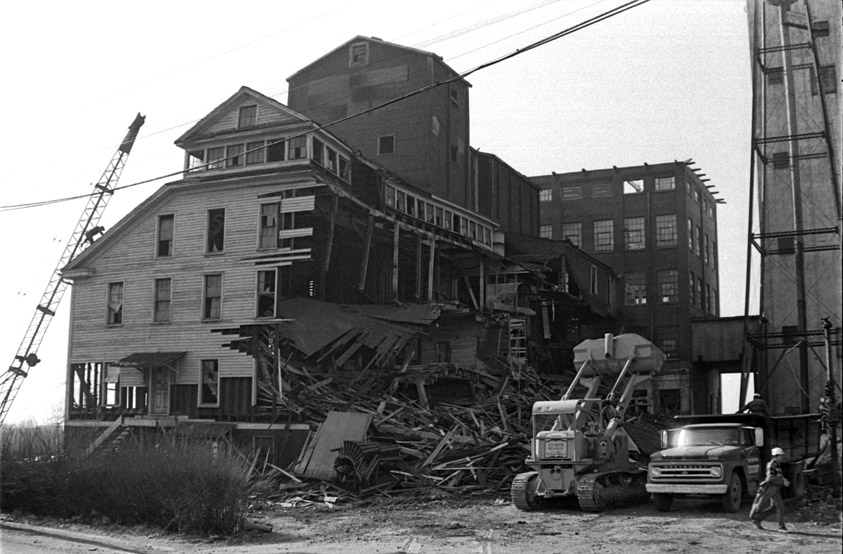 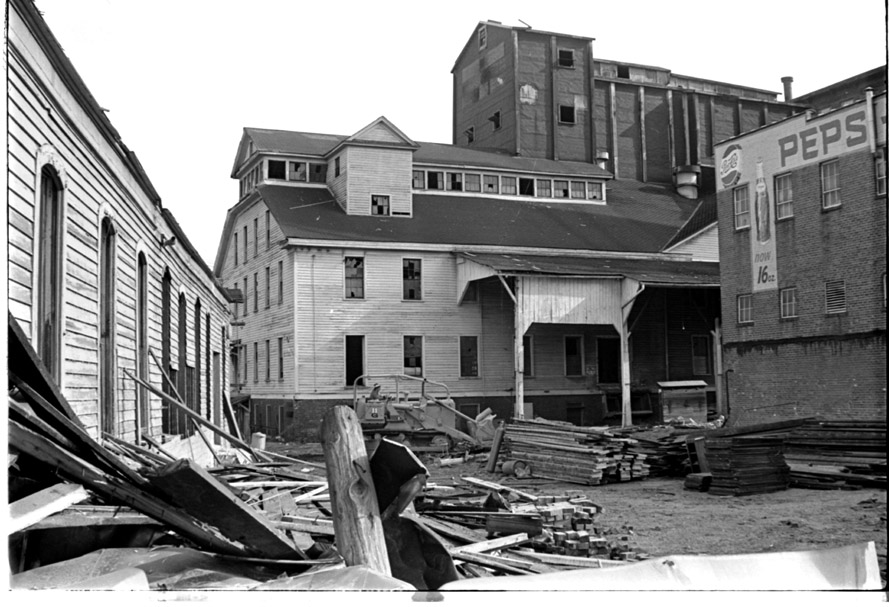 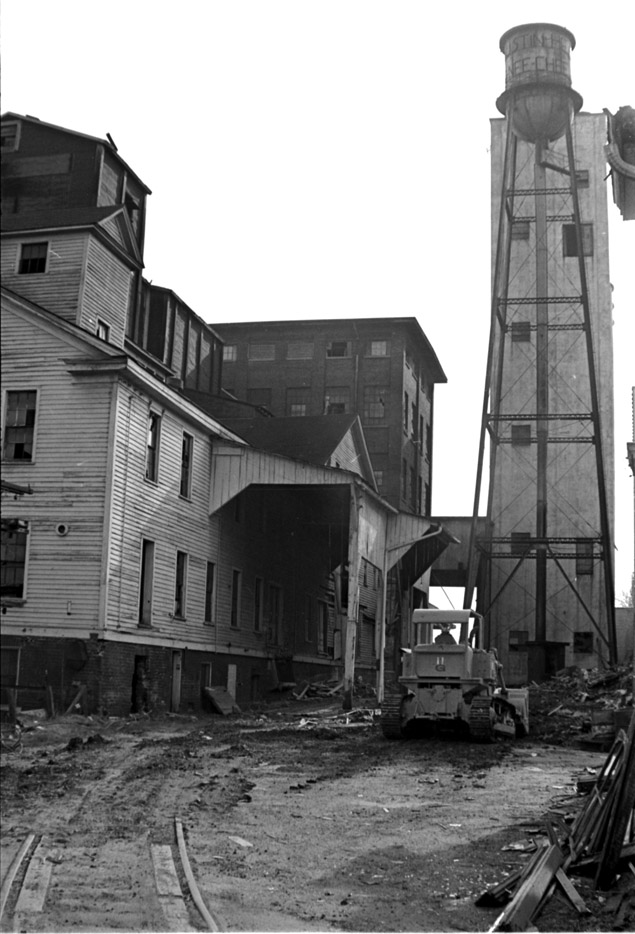 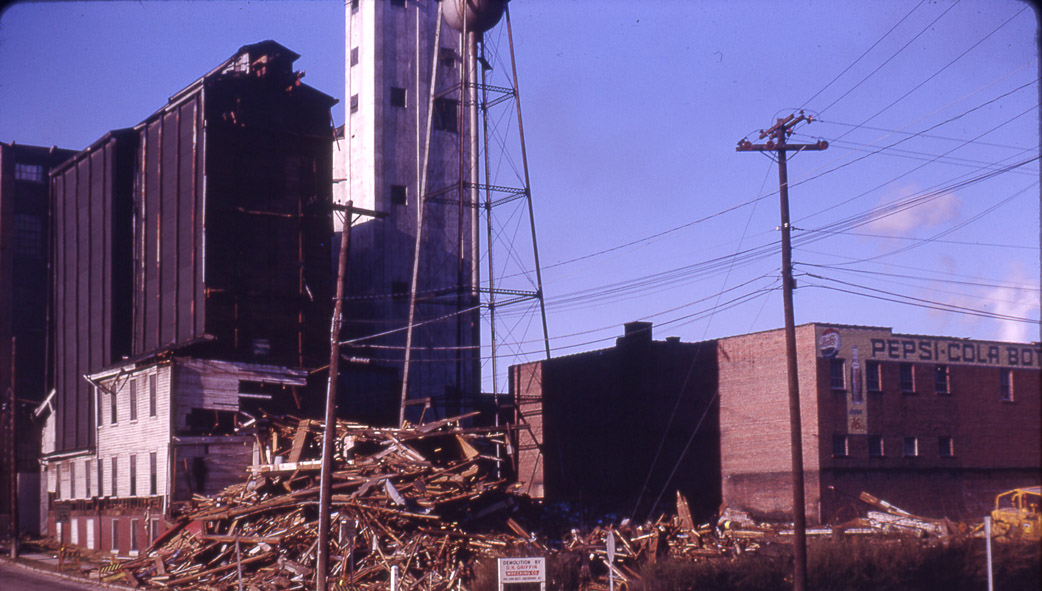 (Courtesy Durham County Library)
Looking southwest from Mangum and Vivian, 1968, as the Austin-Heaton company is demolished. 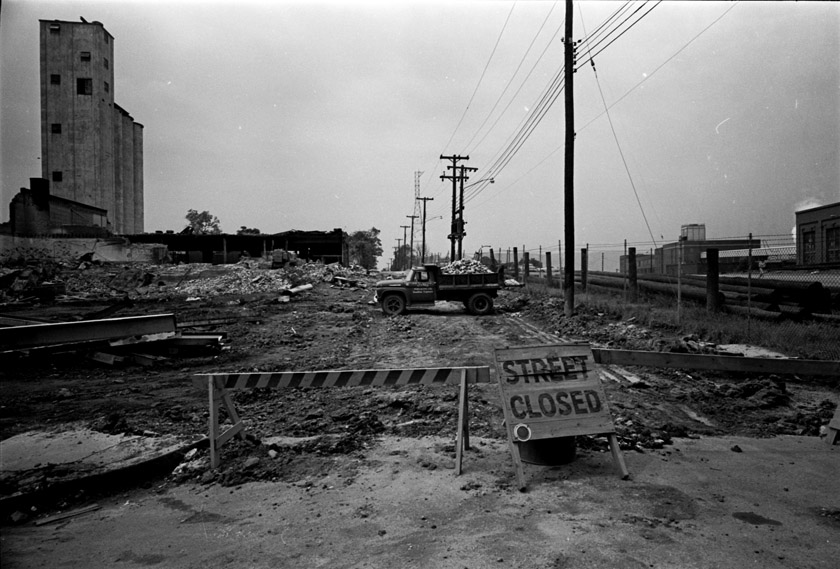 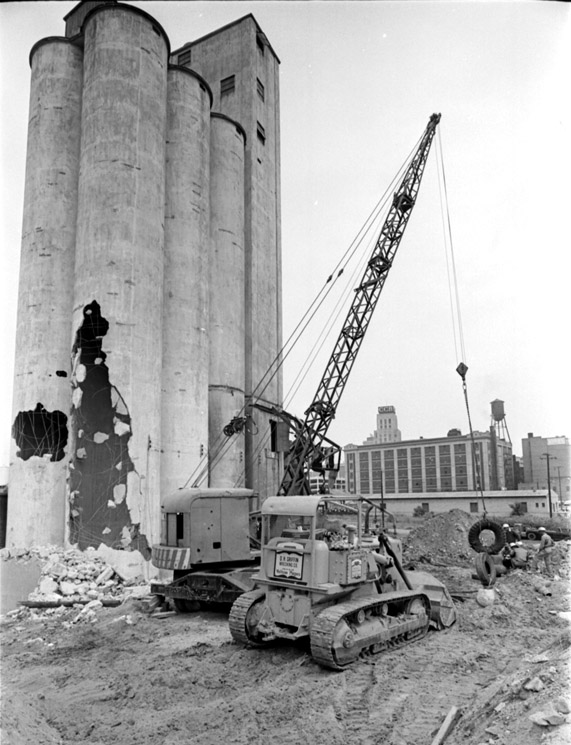 South Street was eliminated from Pettigrew to Lakewood, and the property between Mangum and Blackwell became contiguous.

The Durham Area Transit Authority buildings were then built on Vivian Street between Mangum and Blackwell in 1970, on this site and the former site of the Durham Light and Power company to the west. 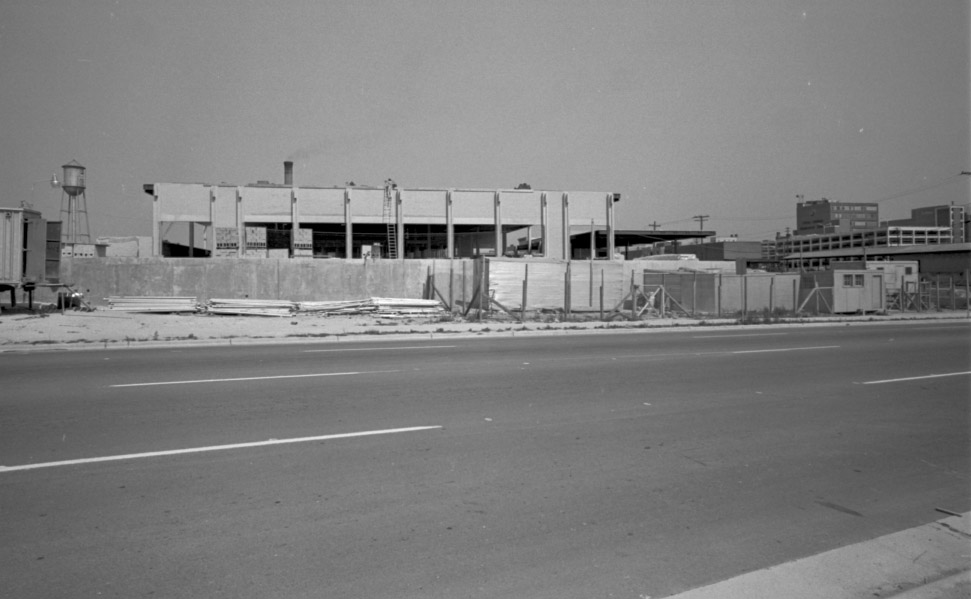 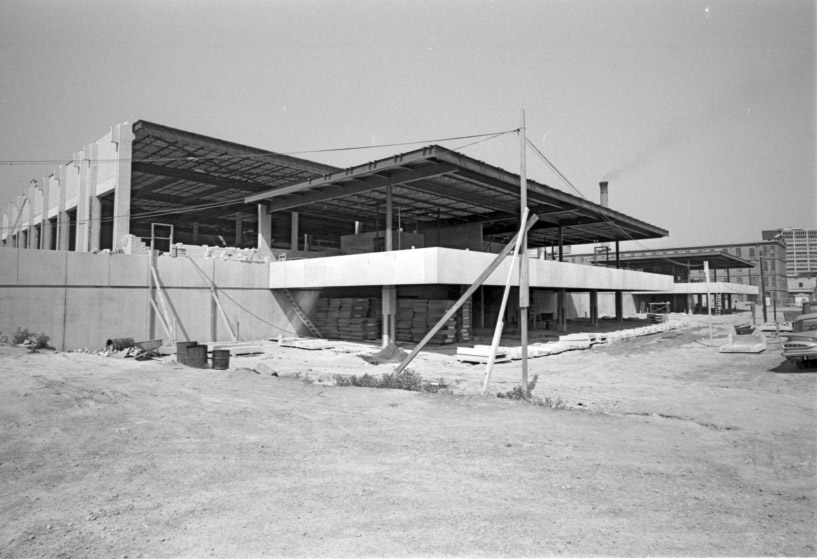 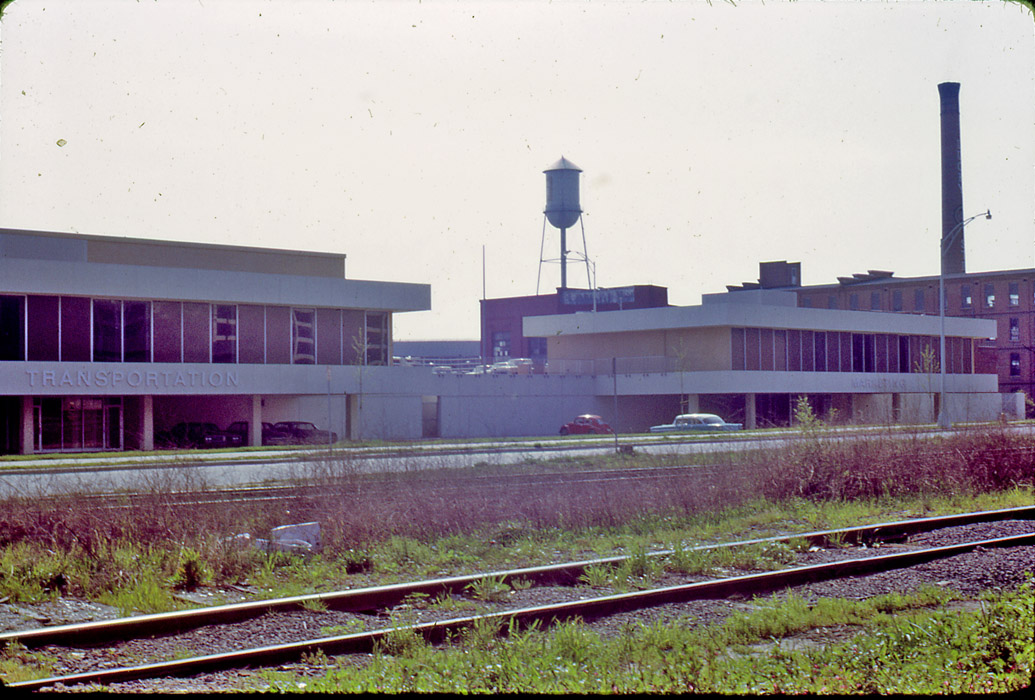 These were torn down in ~2004. This is the 2006 view south, down Mangum, from the corner of Vivian and Mangum.

The story of the Performing Arts Center is a strange one, beginning in the late 90s, that already seems lost to history. Terry Sanford promoted the idea of the Performing Arts institute of North Carolina - a center with national ambitions that would provide training, major events, and a home for the American Dance Festival (ADF). However, he died in 1998, before the idea could really get off the ground.

He had obtained some monetary promises, and the Institute Board sought to bring his idea to fruition. They favored a site in Raleigh, adjacent to the NC Museum of Art, and in 1999 stated that this would be the Institute site. Durham clearly felt that Terry Sanford, former Senator and Duke President, would have wanted it in Durham, where ADF should stay.

Thus ensued a battle royale between Durham and Raleigh, as Durham sought to retain the performing arts center and ADF, which would presumably move to Raleigh with the center. The Herald-Sun and the Institute Board traded barbs (one I remember chuckling about was, after a strongly-worded Herald-Sun editorial, in which they said the Institute belonged in downtown Durham, the Institute Board Chair said something along the lines of "what does the Herald know about downtown Durham - they're out on the bypass." )

Wib Gulley fought (successfully) to derail the move to give the former Polk Correctional Institute land to the Institute in the legislature. However, Jim Hunt signed an executive order on his last day in office approving the Raleigh land lease.

Durham, undeterred, began to make plans to build the center it felt it had been unjustly denied, primarily to retain ADF. They would use the old DATA site, which DATA planned to vacate.

One, the Performing Arts institute utterly and silently imploded - somehow frittering away the money they had raised. Although most of the newspaper articles detailing this saga were before online availability, the Independent had an excellent 'whatever happened to..." article in 2002, available here. The oddest thing about this was that, other than this Independent article, no one ever said a word about the the status of the Institute. It simply never happened.

Two, despite the initial desperate need to build a center to house ADF, the center and ADF diverged significantly, and it became unclear if ADF would even use the center. The center had been rebranded as just another something to "bring people downtown" and a DDI pet project. (This 2004 article can let you reminisce about the good old days when the theater cost a mere $30 million.)

Its purpose made murky, the downtown community then began to question the size, the operator (Clear Channel) and the location of the theater, wondering why we were making such a major investment in 'Downtown South', rather than using some of the surface parking space along Morgan Street. (This 2005 article can let you reminisce about the good old days when the theater cost a mere $35 million.)

Then the railroad had Durham over a barrel with their ownership of a portion of Vivian Street. Had to ante up an addtional $265,000 for that.

The most recent event to nearly derail the theater is the smarmy but probably facially legal deal to get Duke to kick in some more cash in exchange for 'necessary improvements' to allow changes to Anderson Street. Notwithstanding the rebuke this sends to the neighborhood groups who have fought hard to ensure a vision for Duke's Central Campus that is compatible with their neighborhood, it borders on contract zoning, with both sides relying on vague language to protect their interests and avoid legal challenge.

Here is my general map of the site, showing the position of the historical uses. 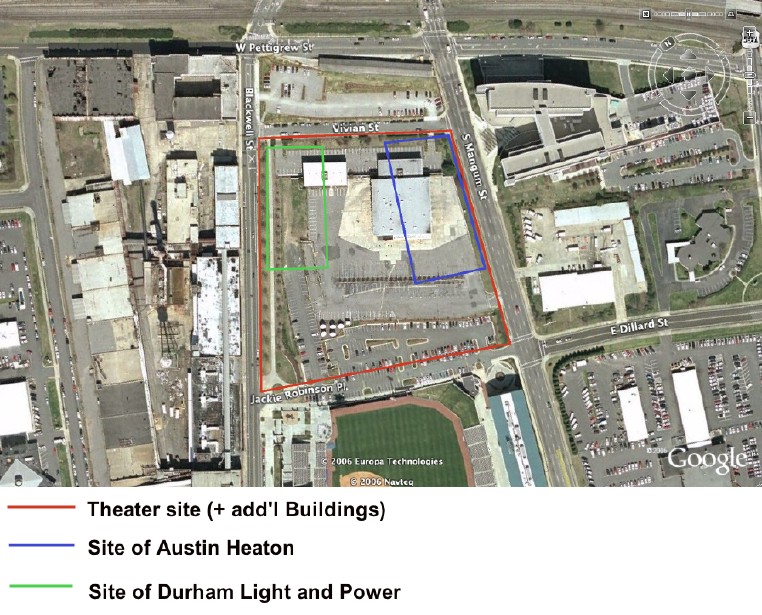 Here is the theater site plan. The theater is located at Vivian and Mangum, with several buildings labeled "Residential" along the Blackwell side. (I haven't heard anything about that.)
The theater is in purple, the parking garage in blue, and the "residential buildings" in yellow. 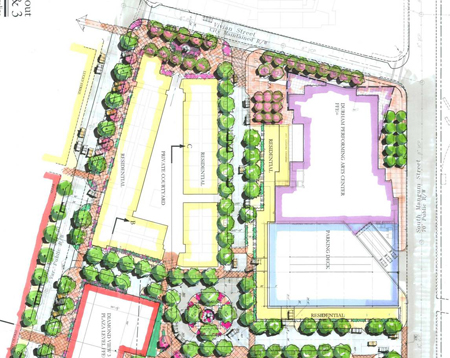 Here is an elevation drawing from Vivian Street (not from Pettigrew). 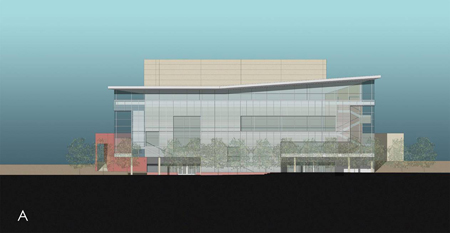 And another from Mangum Street, with American Tobacco in the background.

I hesitated to post about the theater, simply because it is an issue that has been beaten to death and beyond. I'm ambivalent about the theater itself. Someone has evidently decided that our architectural idiom for the future of Durham is glass-cube-with-jaunty-angles (see the proposed transit station, the proposed Human Services complex, the jail, and undoubtedly, the new Judicial Complex). They are the kind of buildings that are meant to stand alone, and Be Impressive. I notice that none of the renderings or elevations include the view from the Loop or Pettigrew, which will be the big Building Supply shed in front of this building. Given the reluctance of the Southern Railway Company to part with a smidgen of Vivian Street, I don't think that's leaving anytime soon.

What has bothered me more is simply the process - that, despite the numerous obstacles, we've moved forward with a stay-the-course obduracy that has failed to question if the reasons for building the theater in the first place were still valid. In fact, those reasons are long gone, and the theater is just another economic development project. Is it the best use of $44.3 million for economic development? Per Bill Kalkhof, it would cost $18.5 million to fix The Loop. How many other things could we fix with the remaining $25.8 million?

We've rushed into dubious deals with Duke, overpriced deals with the railroad, and we've mortgaged away $106,000 per year from the downtown revitalization fund for the next 27 years. These (ongoing) contortions suggest a desperation to build this theater that seems unwarranted. In reality, the option was always there just to forget about the theater. Will it be nice to have a shiny theater building on what is now a dirt pit? Sure, but it's not clear that Durham would be worse off without it.

The Performing Arts Center has broken ground, and appears that plans are crystalizing for the Diamond View buildings to the south and west of the center. 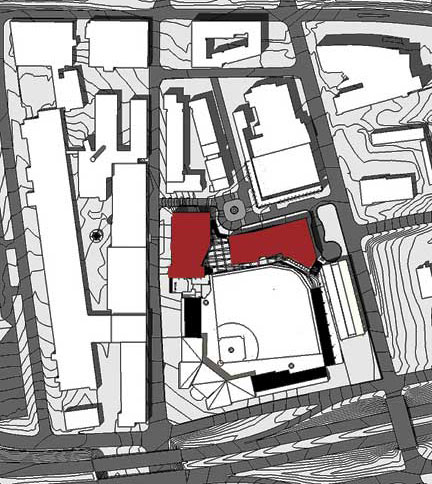 A view of the site shows the two new buildings - just the edge of the westernmost building was visible on the site plan above. 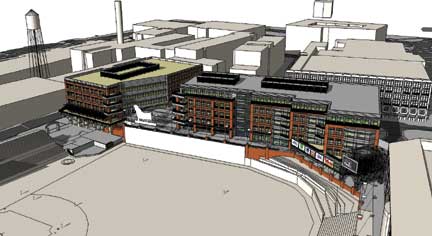 Both buildings have "plaza-level retail." While first-floor retail is a good thing, it worries me that the architects fell in love with inwardly-focused development sometime in the 1950s and can't seem to shake it. Does this mean that the activity will focus on the 'plaza' in the middle of the block and eschew Blackwell? I hope not, but architects have been spurning the street for a long time.

Progress on the Performing Arts Center: 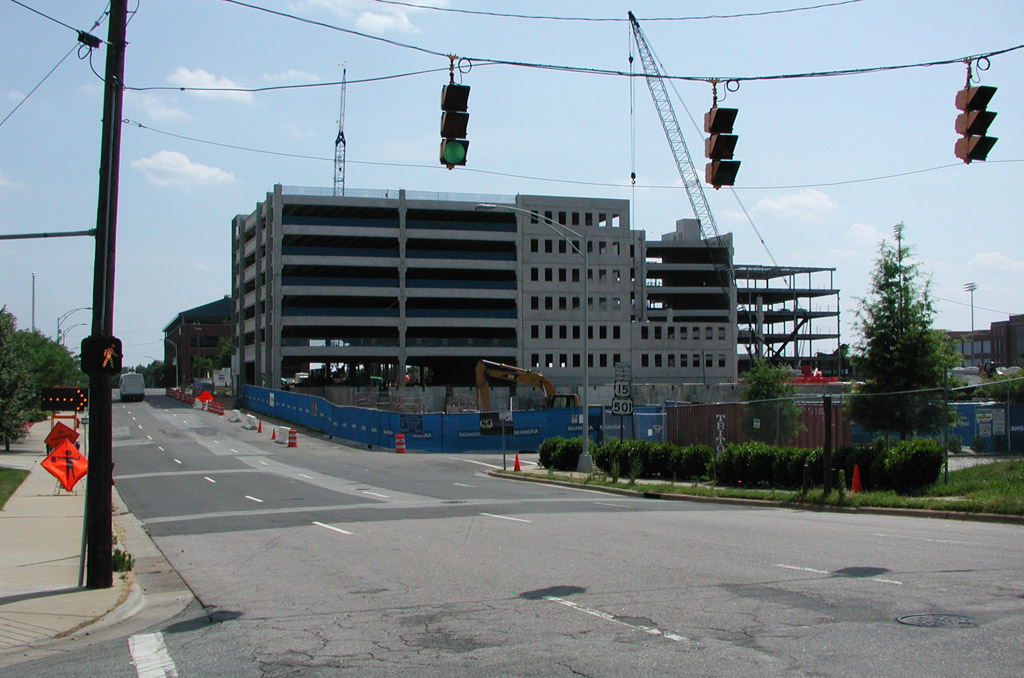 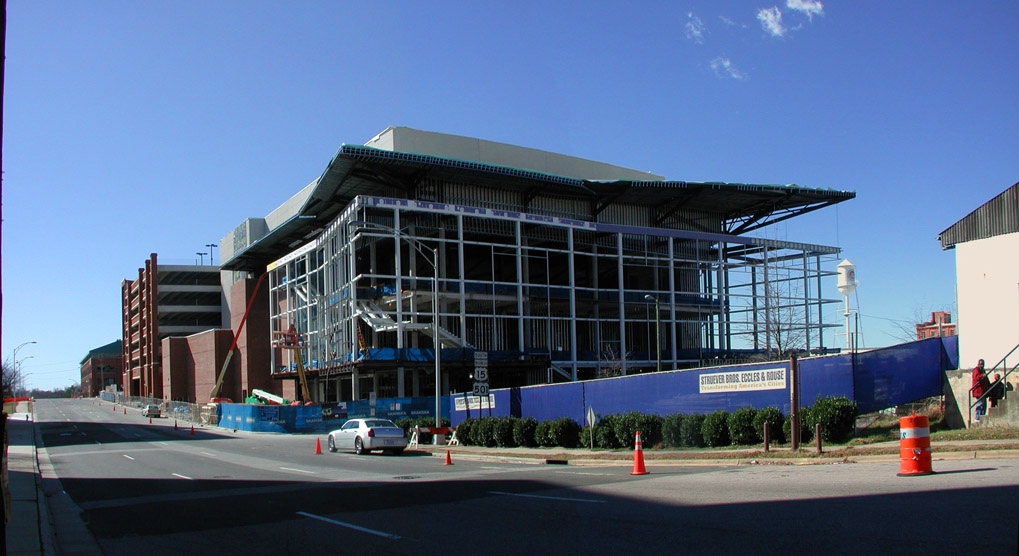 Update:
I must admit that I need to do a bit of crow-eating, as the Performing Art Center is more impressive than I realized it would be - particularly the terminal vista apparent as one crests the hill at Mangum and Parrish Streets downtown. Although I still disagree with the cost-benefit, I do think that the building will be, architecturally, a vibrant addition to downtown - as the lights illuminate the glass facade, I think the appearance from points north will be quite beautiful. 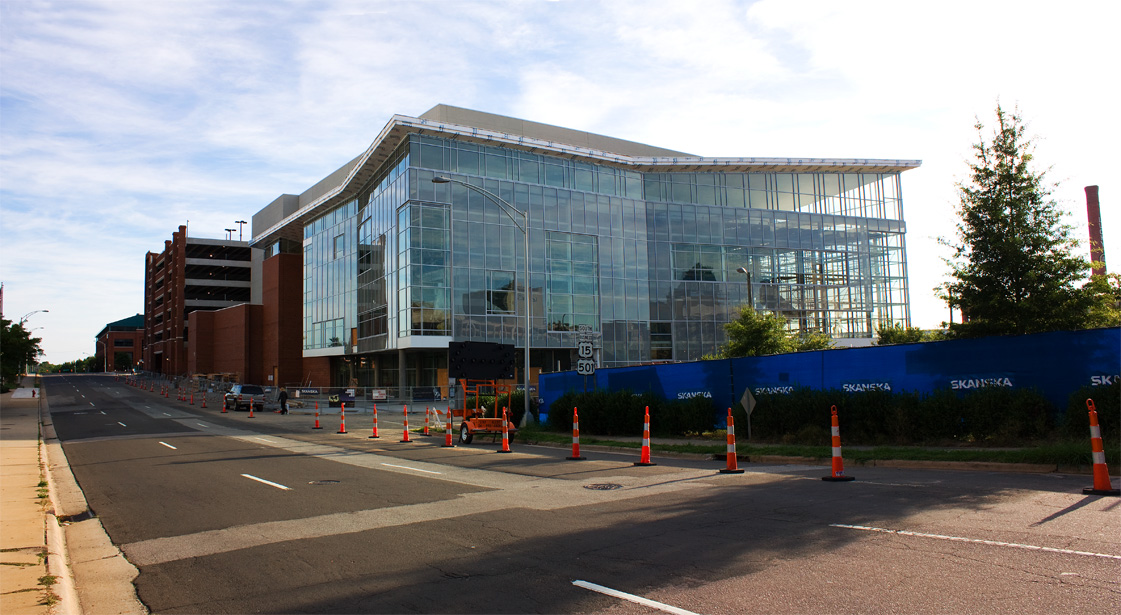