505
Yancey Street
Durham
NC
Year built
1901
Year(s) modified
1977
2010
2016
Architectural style
Folk Victorian
Construction type
Frame
Neighborhood
West End
Use
Residence
Building Type
Residential
Can you help?
You don't need to know everything, but do you know the architect?
Log in or register and you can edit this. 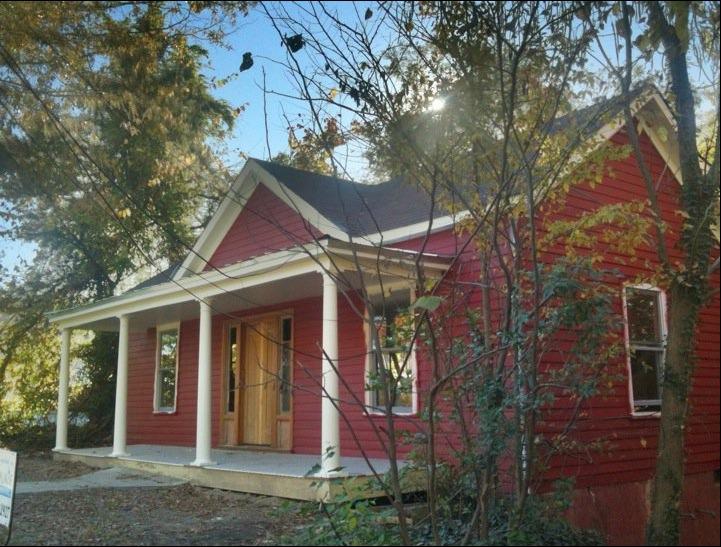 James W. Blackwell, brother of WT Blackwell (of Blackwell's Durham Tobacco fame) built his house at the southwest corner of Lee (later Duke) Street and Yancey Street sometime between 1881 and 1887. That house first appears in the City Diretory of 1887, which included a map of prominent Durham locations. 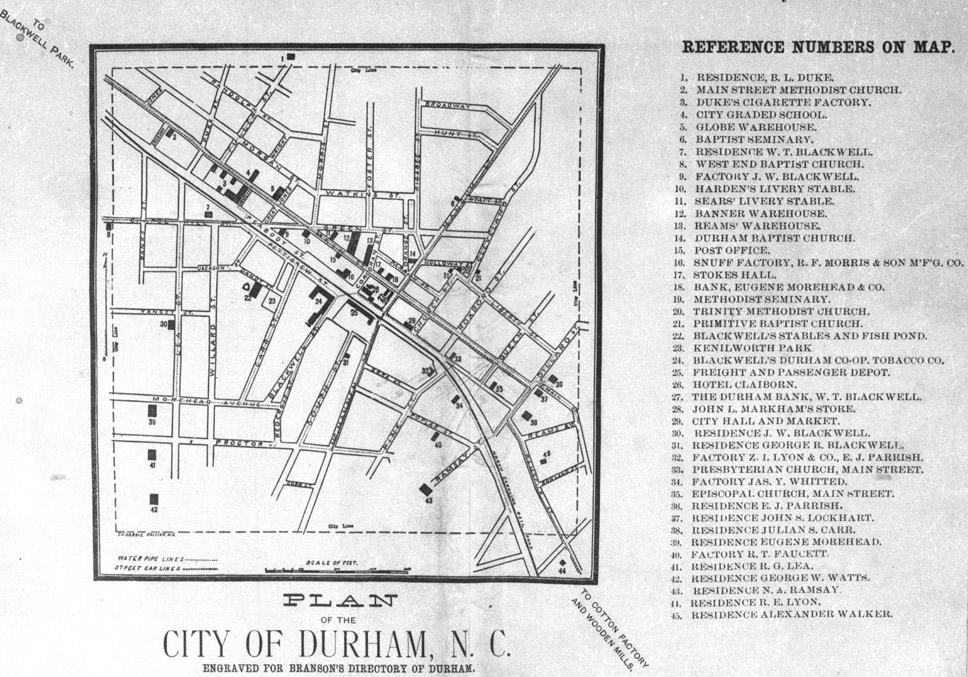 Below, an early photograph, taken sometime in the 1880s, from the vantage point of Blackwell's Durham Tobacco Co. (later the American Tobacco complex,) looking west, shows the 602 South Duke Street house sitting at the edge of the developed area southwest of the center of town. 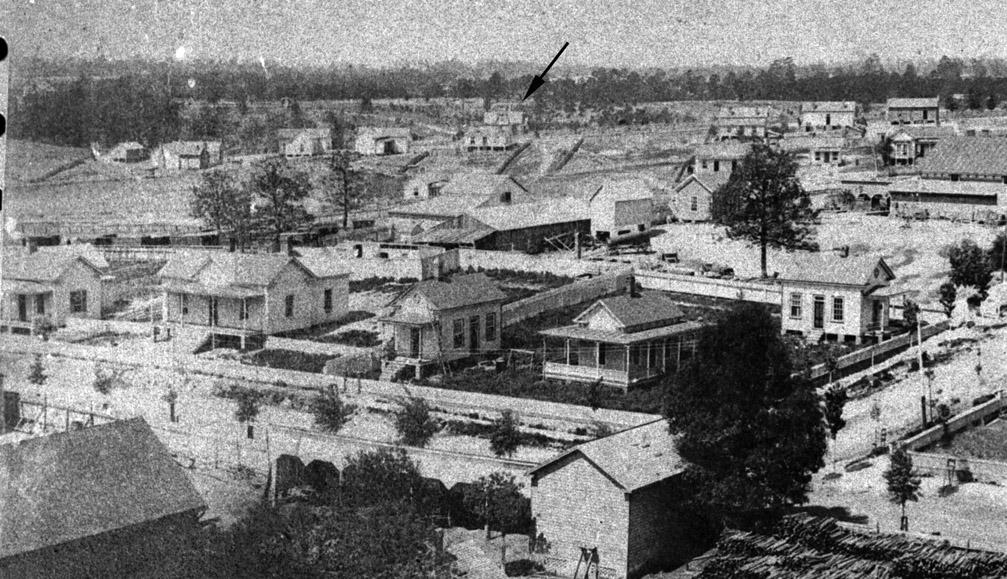 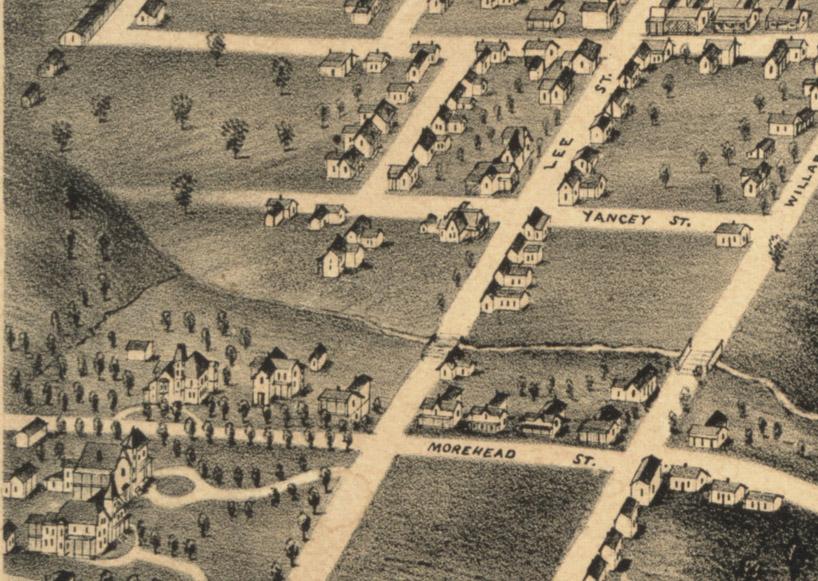 The 602 South Duke house, with unusual trapezoidal gables and cruciform layout, is visible on the 1891 Bird's Eye of Durham, above.
(Courtesy Duke Rare Book and Manuscript Collection)

The 602 South Duke house was the site of the genesis of the Second Baptist Church (later Temple Baptist Church) which began as a bible study in the house before William Vickers gave the land to establish the sanctuary on West Chapel Hill St.

Blackwell had a number of careers, including work with the tobacco company, head of the Builder's Manufacturer's Supply Co., and a cashier for the Durham Water Company. He also bought and sold real estate and later lived at 701 Jackson St. after selling the 602 South Duke house in the 1890s.

505 and 507 Yancey were constructed as similar, triple-A roofline cottages, hall-and-parlor style, each with a two room wing extending back from one of the rooms. The center hall exited onto a rear porch that extended the length of the wing and provided access to those rooms to maximize bedroom space. It's often interesting how small houses of this era not intended for the wealthy nonetheless had special details; for example, 505 and 507 Yancey St. both had two-leaf (French) doors on the front.

Laborers, primarily connected with the tobacco companies and the railroad, lived in the houses during their first 17 years.

On October 29, 1921, FNB subdivided the parcel in two (between the two houses) and sold 505 Yancey to JH Rutlege and his wife - whose name at first glance appears to be a poker hand: Nine High Rutlege.

On April 29, 1926 the Rutleges sold the house to John Noel and Clara Brame. John Brame worked as "fixer" / machine operator for Liggett and Meyers. The Brames would live in the house for the next ~40 years.

On May 2, 1966, the widowed Clara Brame conveyed the house to her son, Sam(uel) Thomas Brame.  The house then became rental property again.

The character of the surrounding neighborhood changed dramatically in 1967-1968. Construction of the Durham Freeway severed the 500 and 600 block of Yancey from Morehead Hill and the West End to the west. Urban Renewal demolished the entirety of the neighborhood to the east of the 500 block of Yancey (east of South Duke Street.) The intent, if not the action, was to convert the small remaining residential area to commercial/institutional use (which was the zoning implemented after the demolition and Freeway construction.) 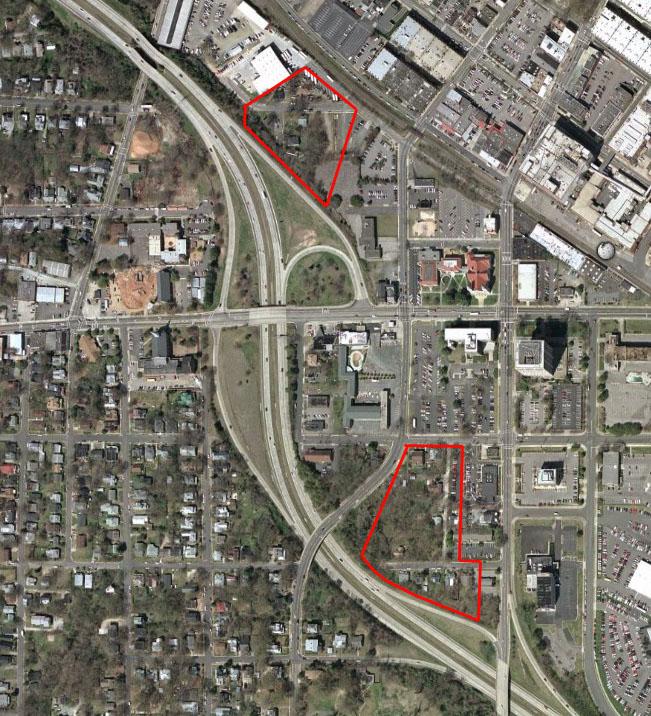 The southern (lower) of the two areas outlined in red is the small residential pocket containing 505 and 507 Yancey Street. The former connection with the neighborhood to the west is still apparent. 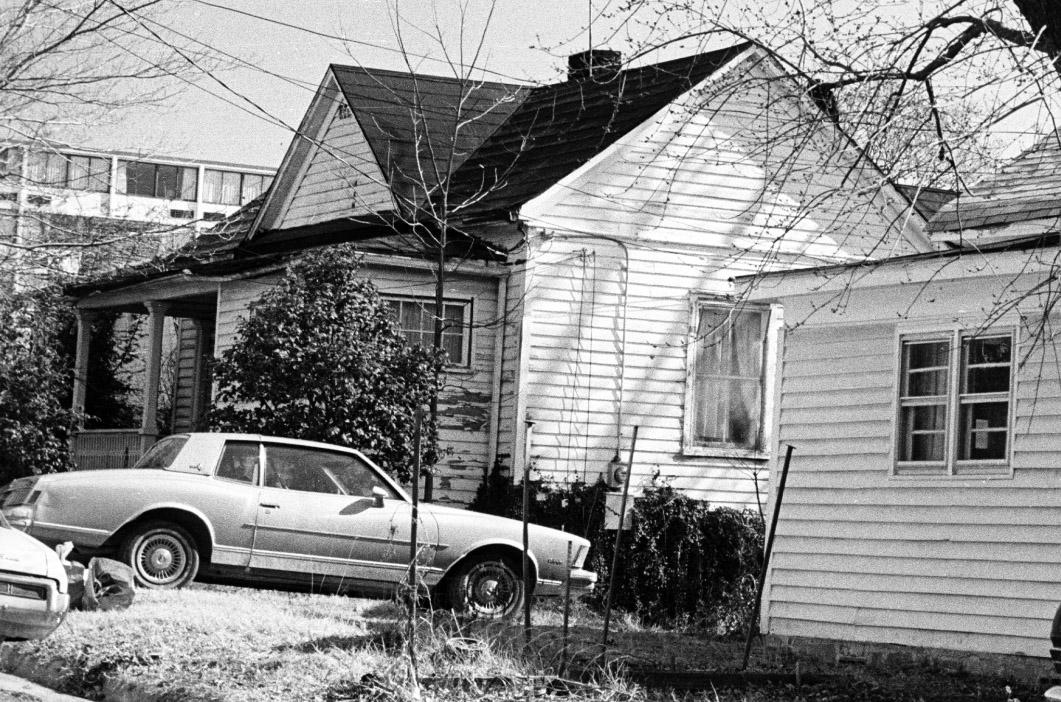 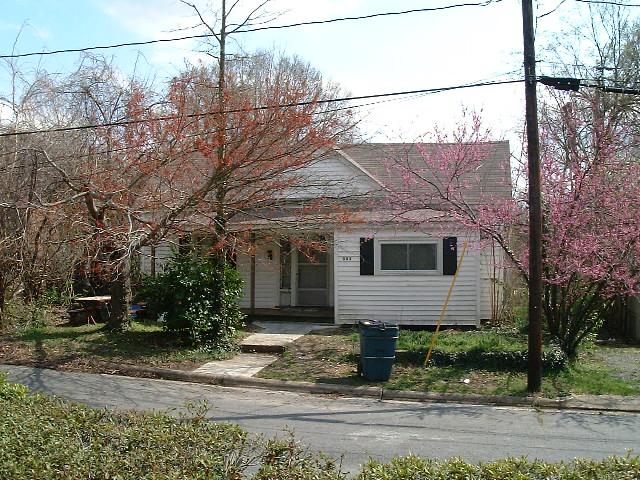 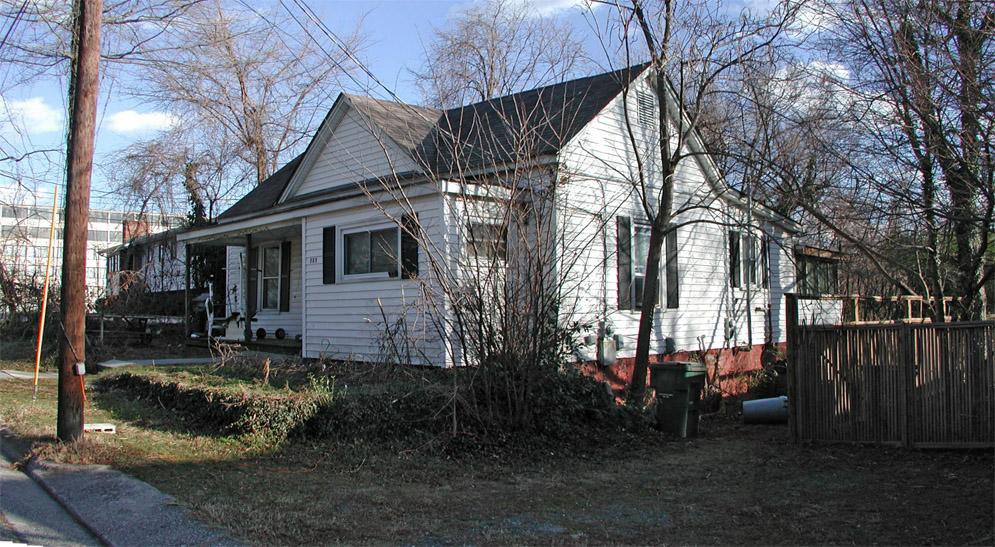 On January 2, 2010, the house burned badly, resulting in total destruction of the rear room (kitchen) and roof. 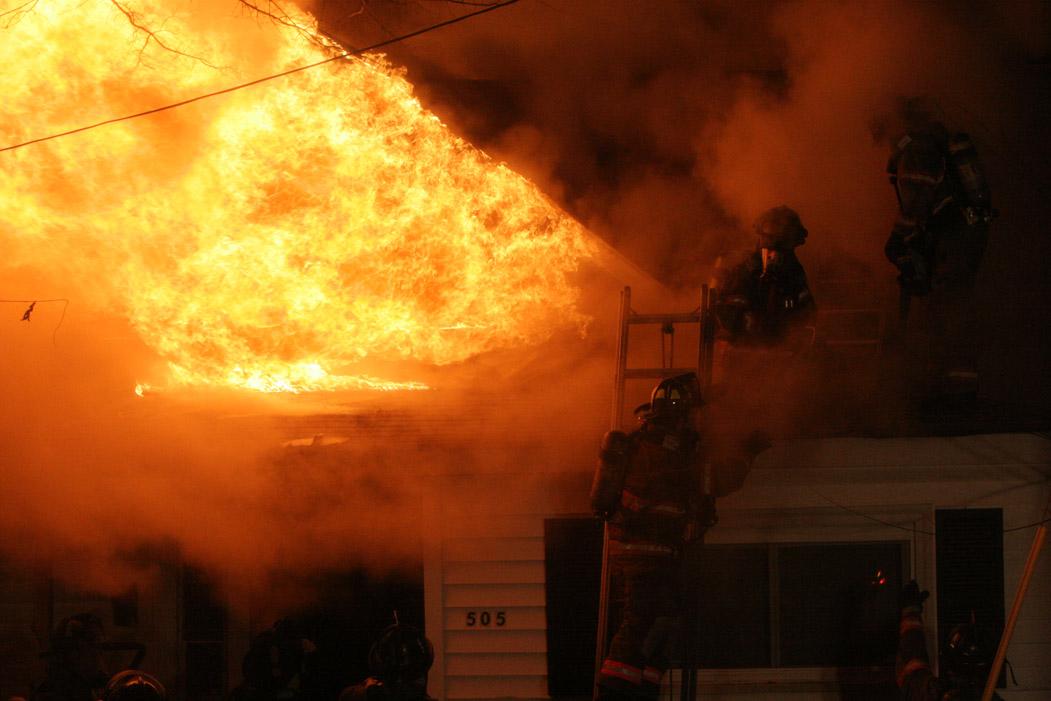 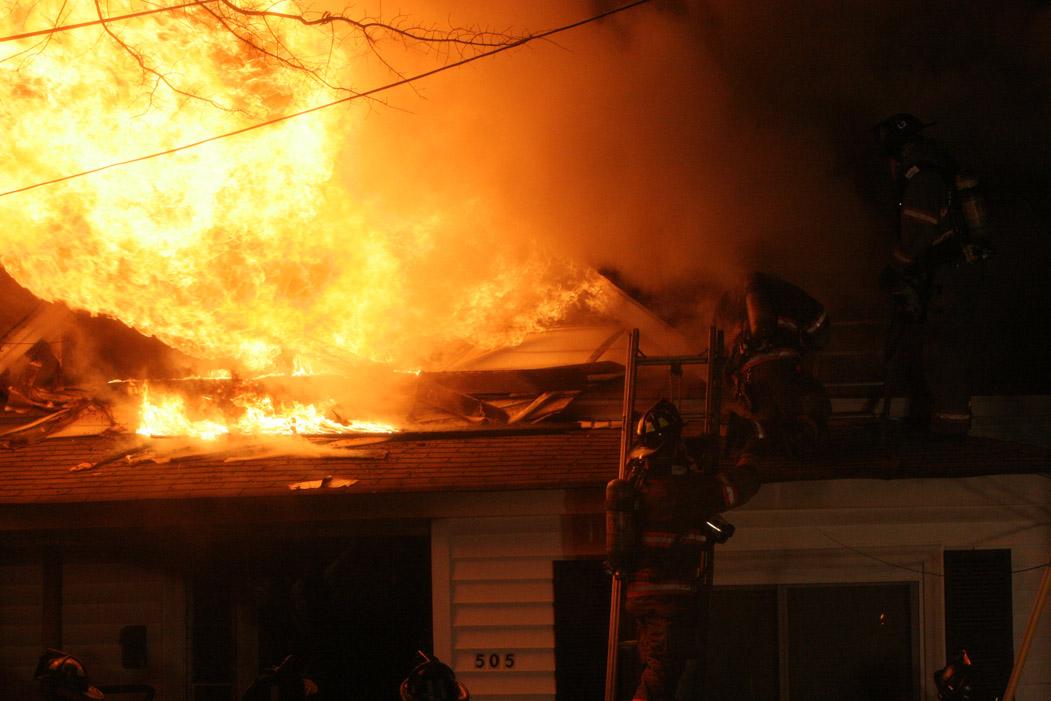 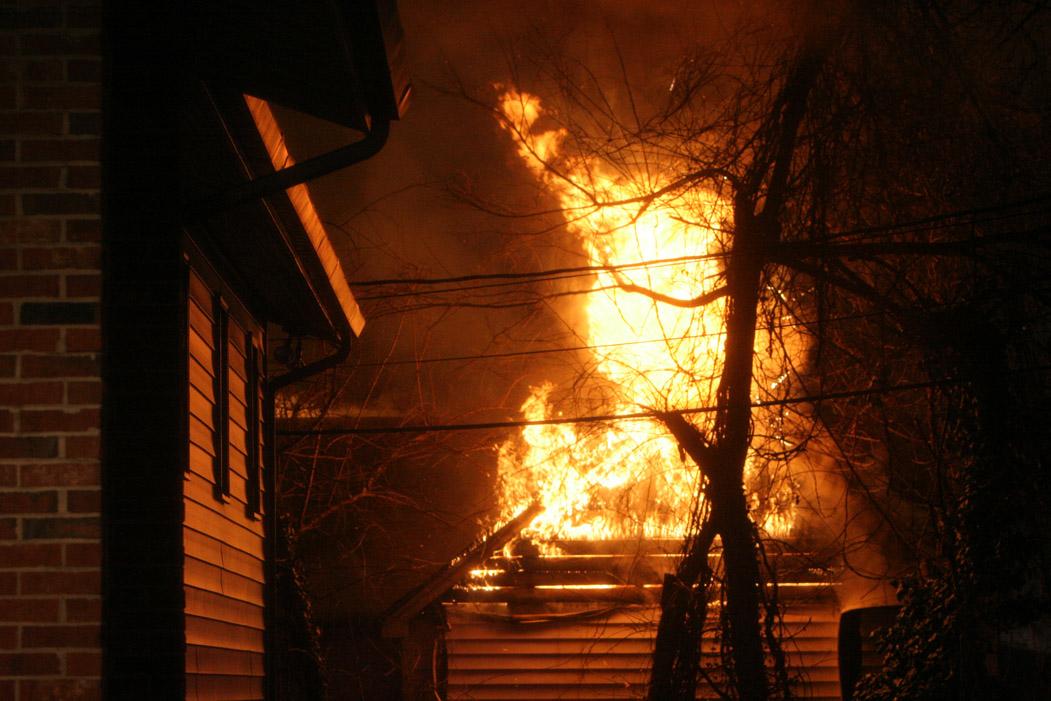 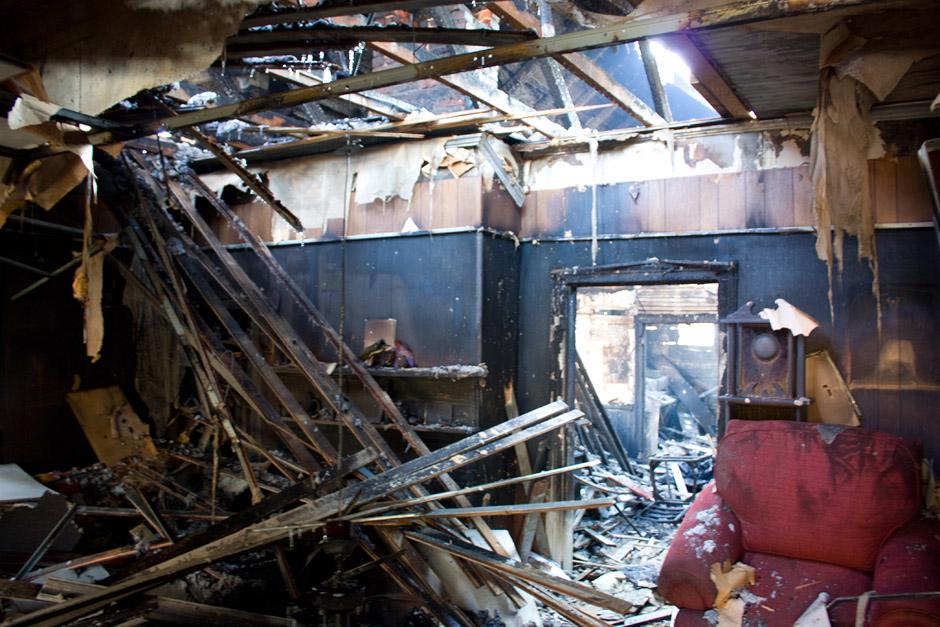 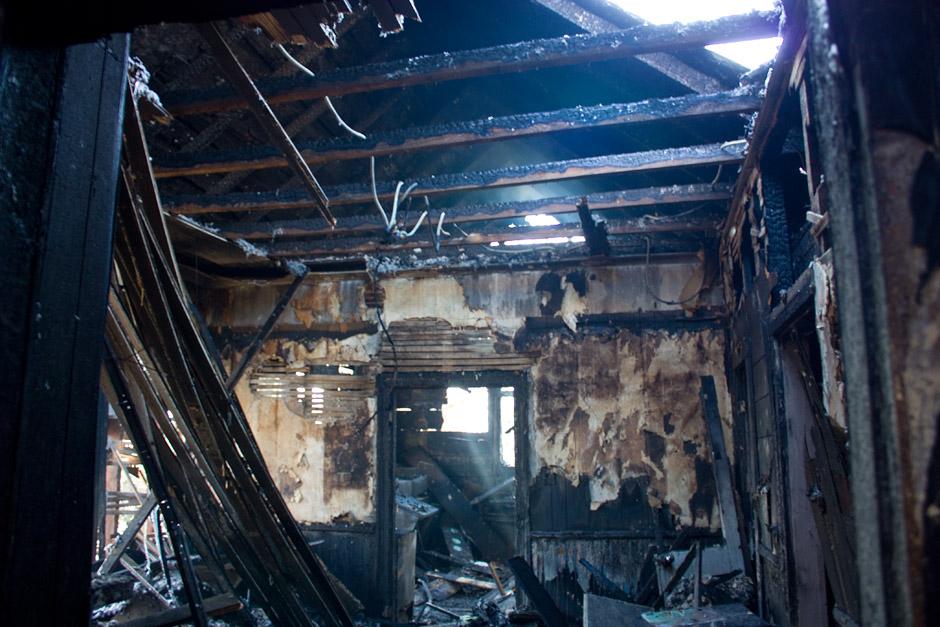 In March 2010, the house was acquired by the owner of the adjacent house (507 Yancey Street,) Gary Kueber. Gary did a 'shell' renovation of the house over the course of 2010, replacing the entire, badly-burned roof structure, removing various plastic 'enhancements' and returning the facade and floorplan to the original layout. 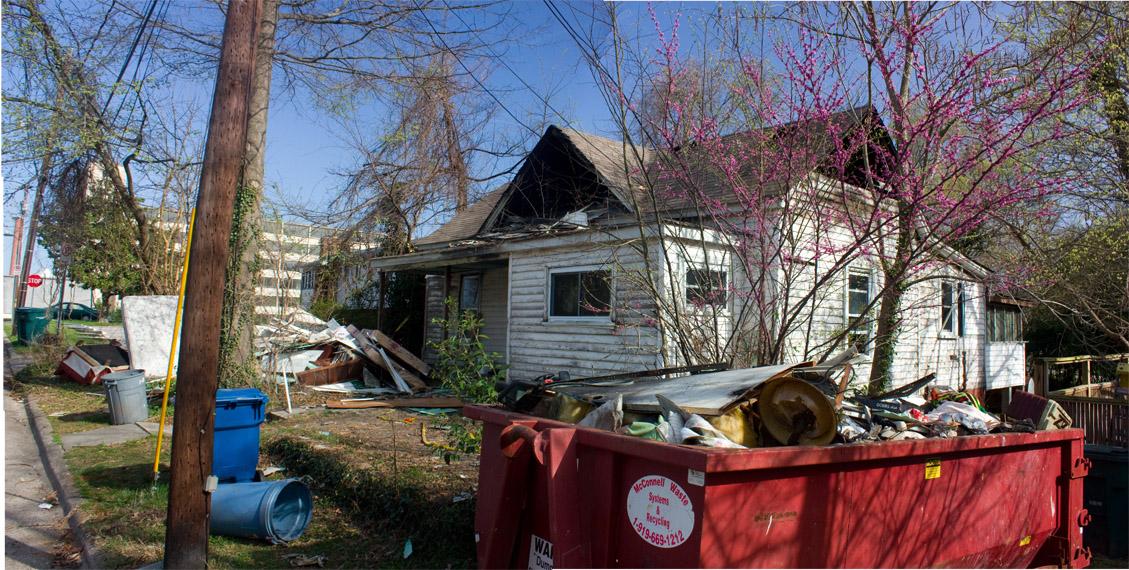 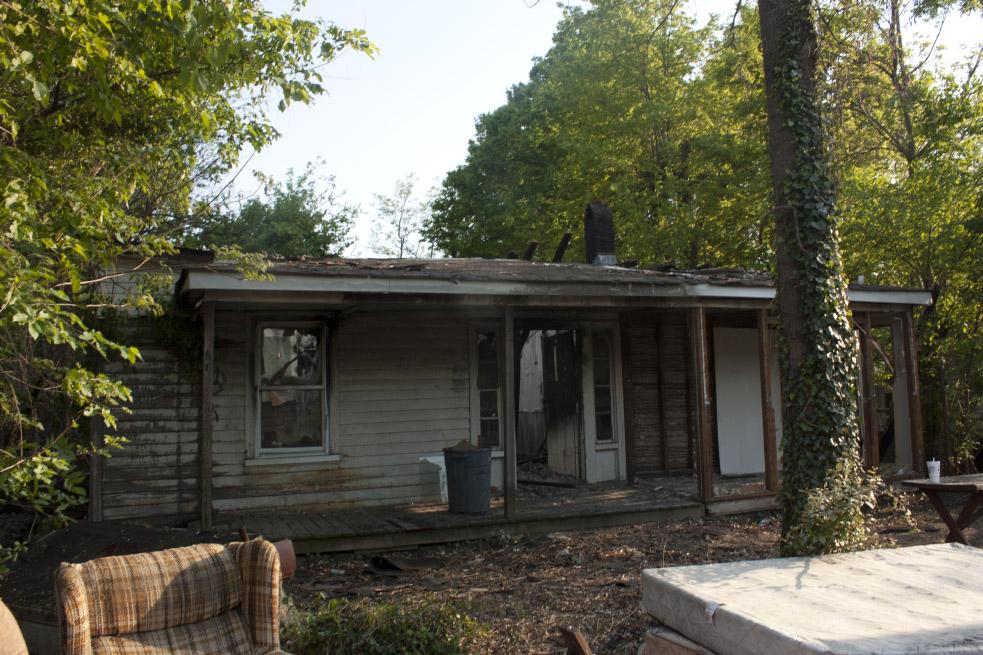 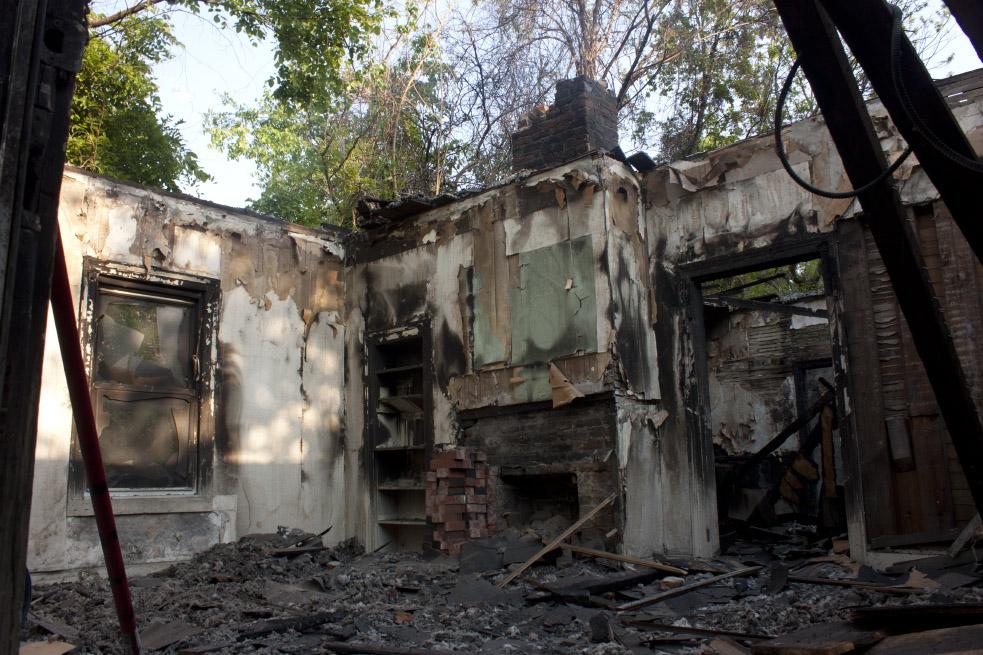 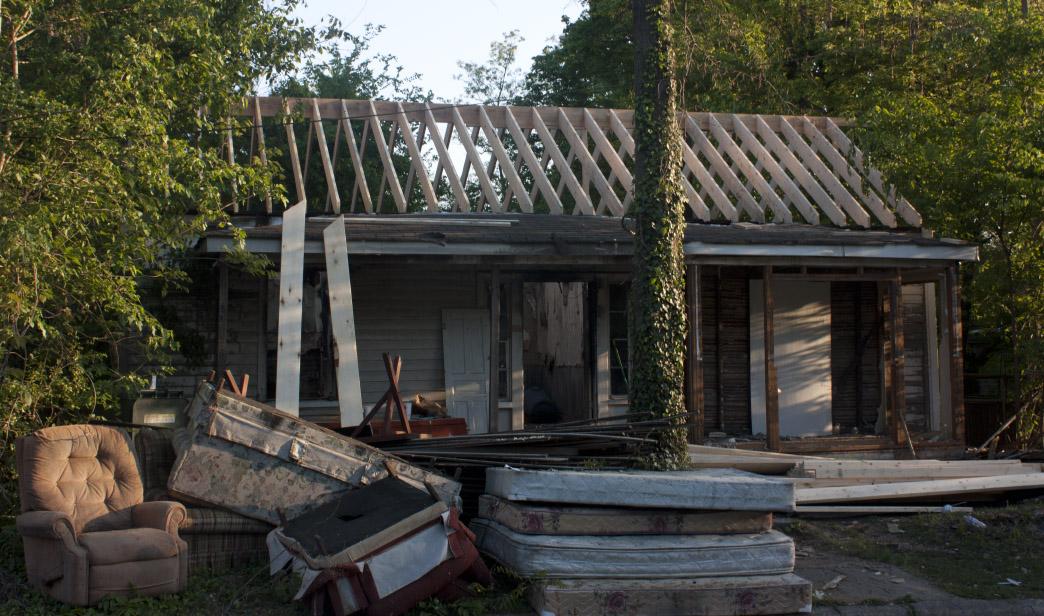 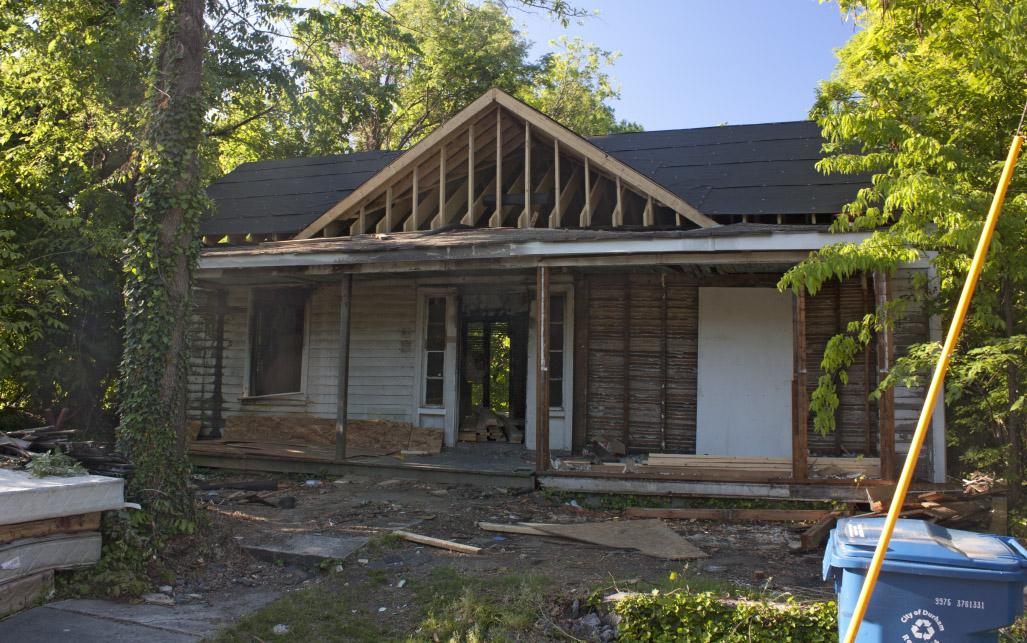 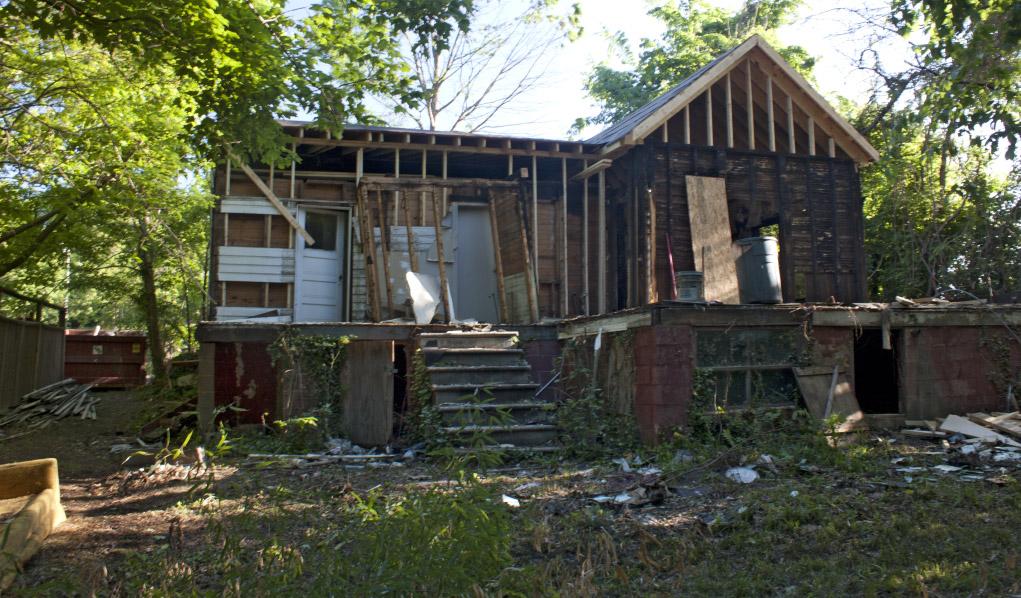 With some percarious and non-original shed ells removed, as well as the kitchen - only the floor joists were unburned in the kitchen. 04.27.10 (Photo by Gary Kueber) 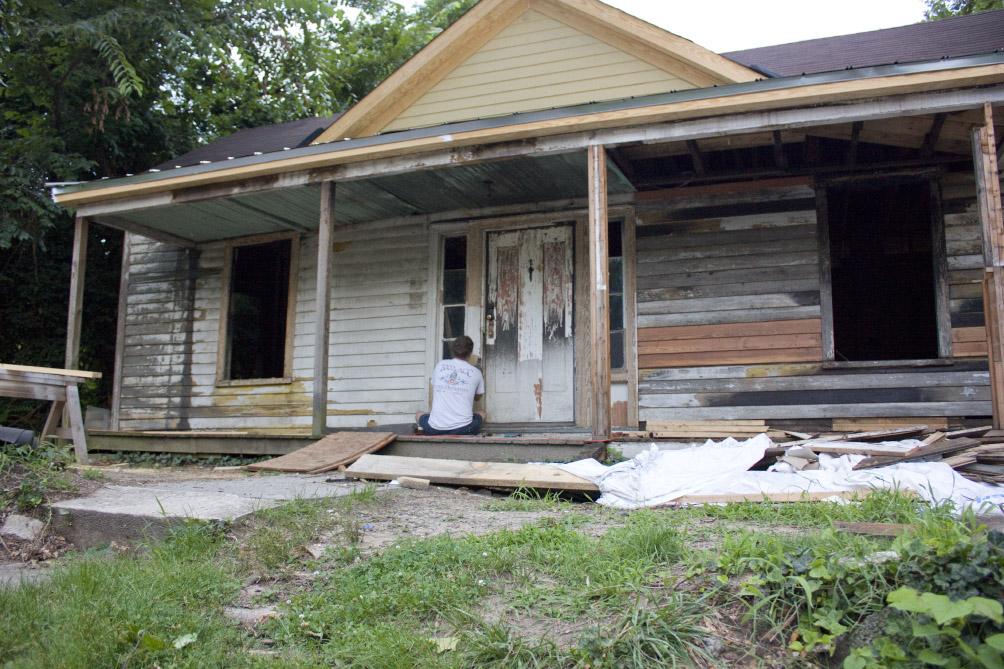 After rebuilding the original front facade configuration, me stripping wood - 06.25.10 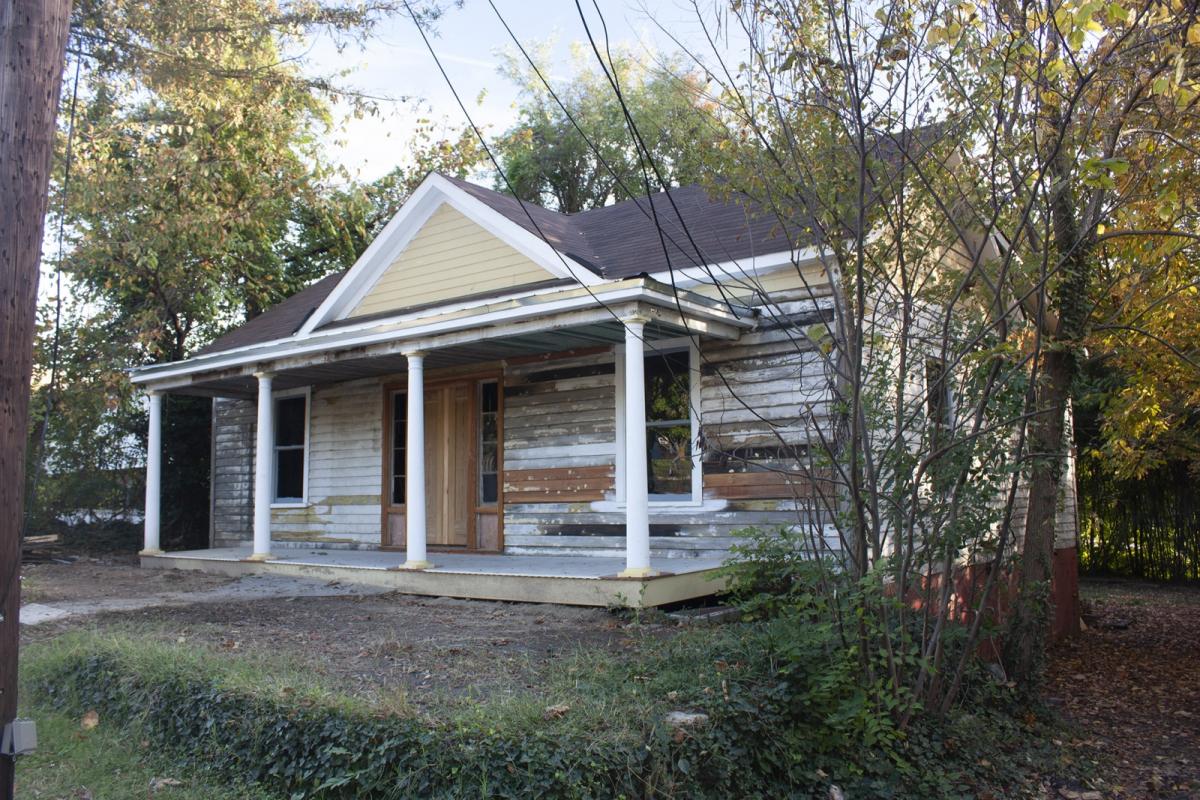 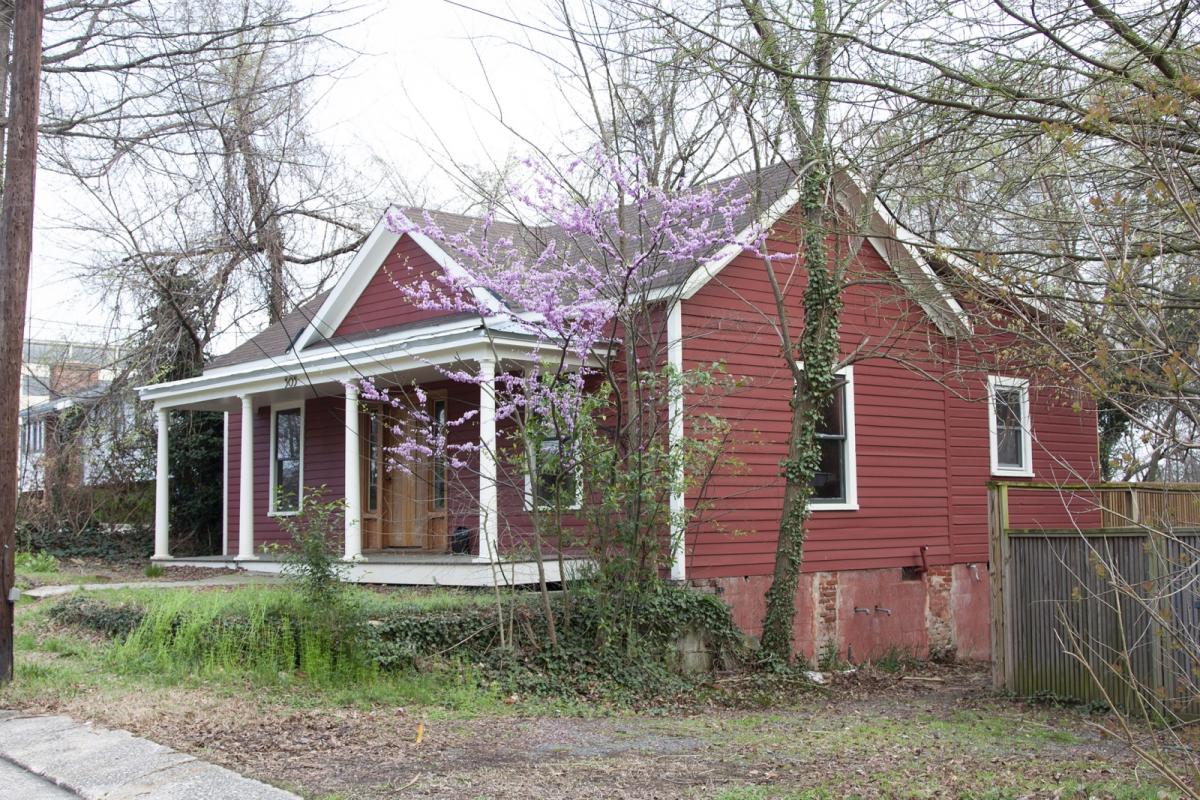 In March of 2016, Kueber moved this house to 807 Vickers Avenue. (Click on that entry to find out what happened next...) 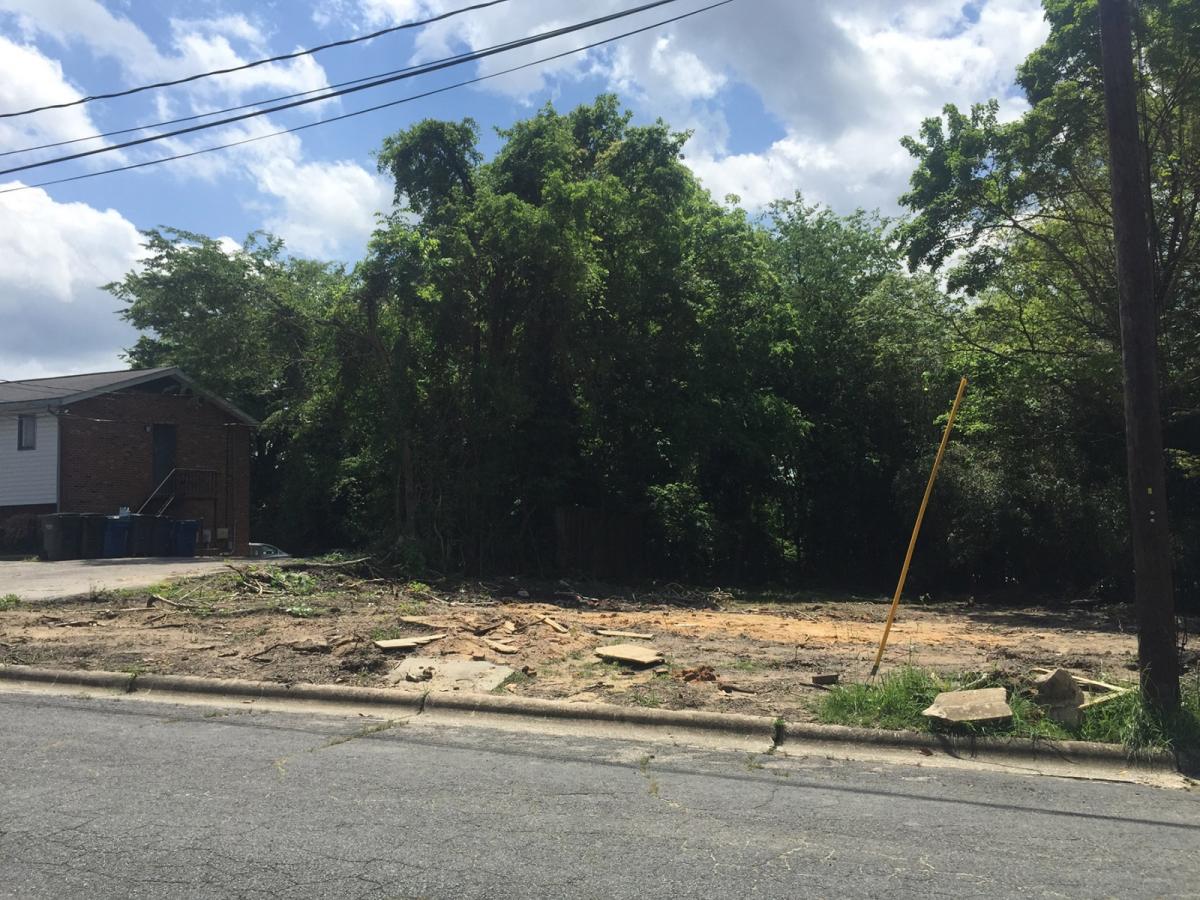 50 years after the original 'demolition by zoning' applied to this neighborhood, it appears that a strong real estate market is making the conversion a reality. In the aerial towards the beginning of this post, I showed two residential pockets that remained on the north side of the freeway in the 2000s. As of 2018, the top of those two is completely gone. The Yancey pocket is much-diminished with the removal of these two houses and the full clearing and demolition of the houses in the entire block bounded by Gordon, Jackson, Yancey, and Gregson. Only three historic houses remain on this street and in this pocket as of August 2018. 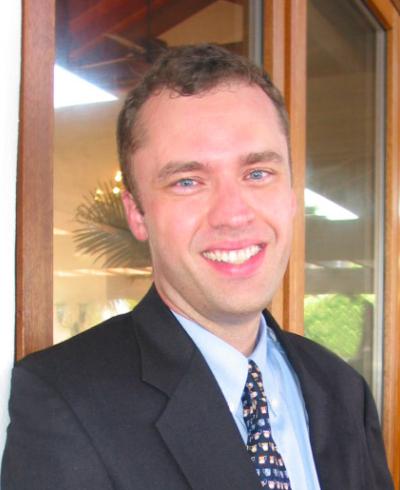 Dr. Gary Kueber was born in New Orleans, LA. He grew up in the city and came to Durham in 1988 to attend Duke University, where he majored in Zoology and English. He returned to New Orleans for 4 years to complete medical school at LSU, whereupon he returned to Durham, NC to pursue residency in Internal Medicine at UNC Hospitals. He began...
Read More

It sounded like it was some combination of electrical fault and large pots of cooking oil in the kitchen; the occupant was a chef at Bullock's and liked to fry stuff.

In reply to It sounded like it was some by gary