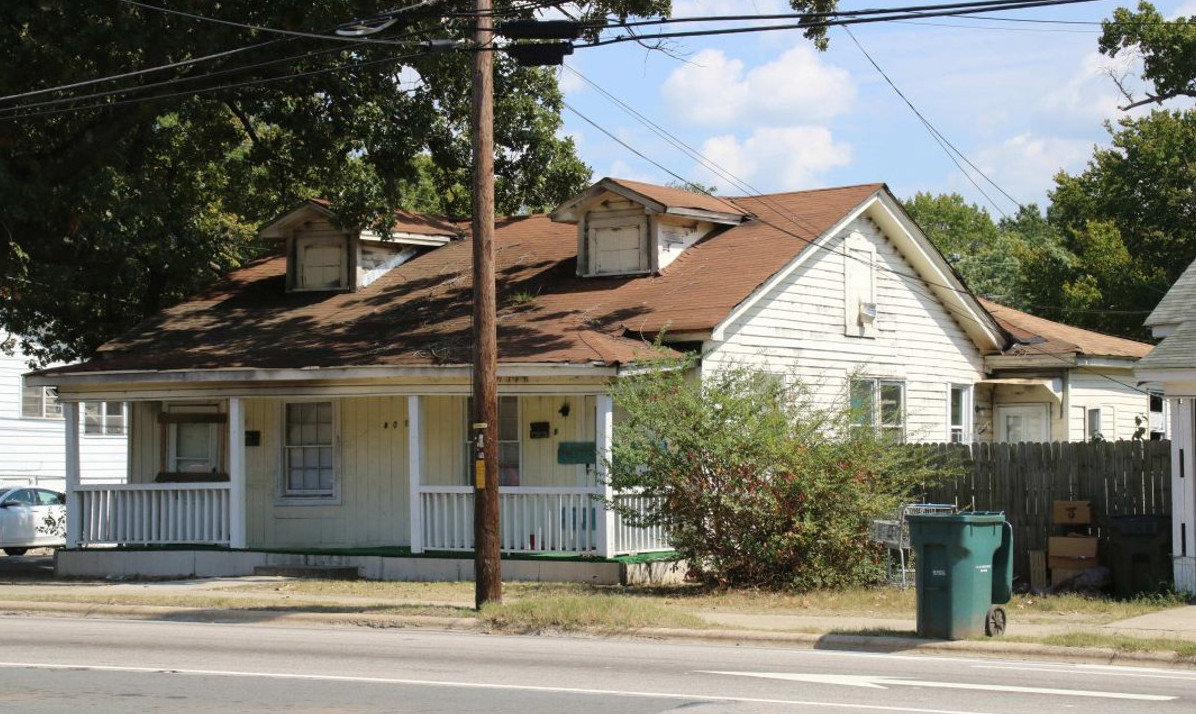 The history of South Alston Avenue deserves more attention than it has gotten to date; even this site seems to have looked past it about as quickly as the cars fly on NC-55.  Though a north-south road through this area has deep roots and this section looks like it was incorporated into town limits by at least 1907, the east side of Alston around Linwood seems to have remained undeveloped until it was subdivided by Edgemont Securities - the real estate arm of the Carr family empire - in the early 1920s. 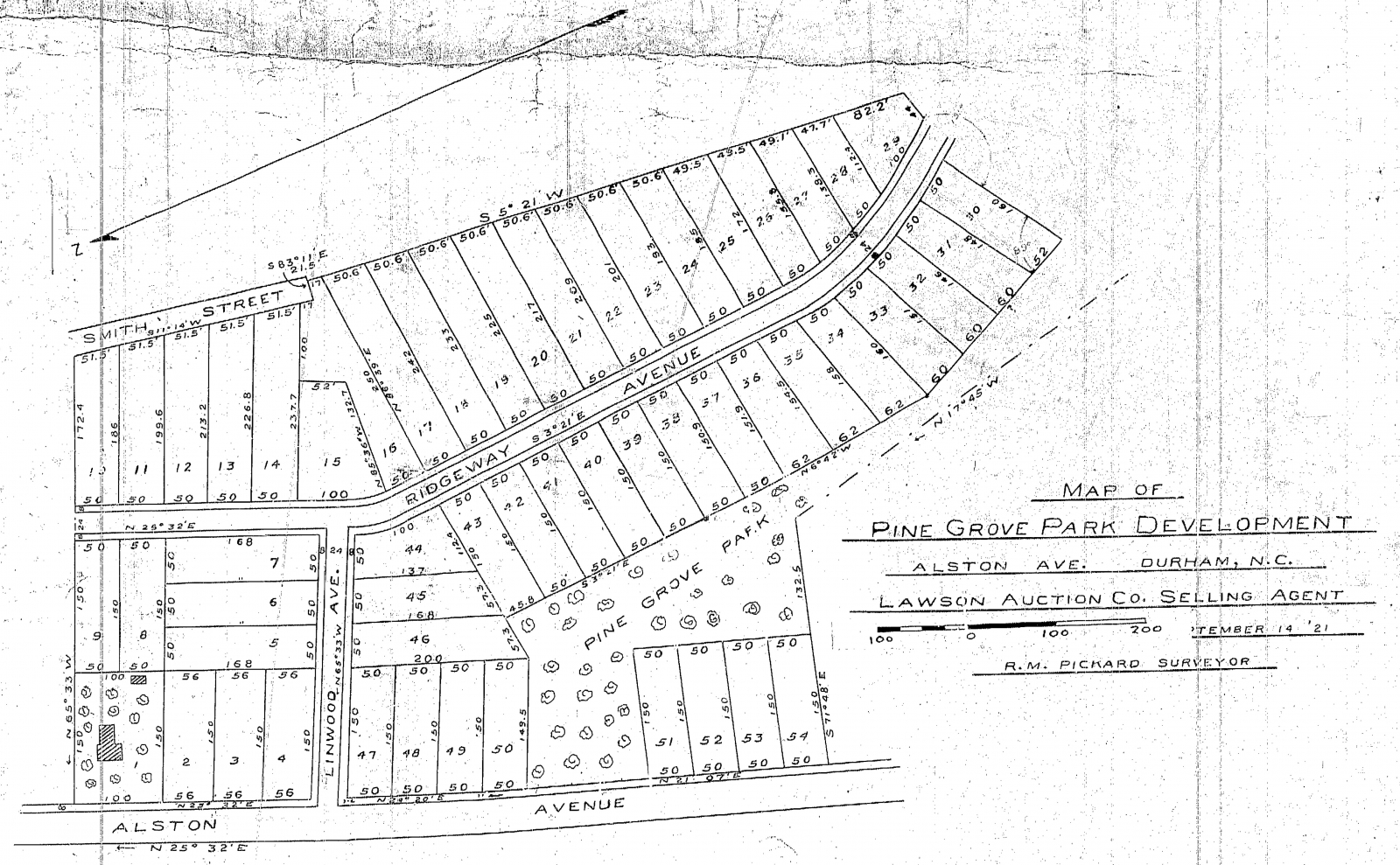 As the name and layout suggest, the development was designed with a wooded park reaching from Alston behind the building lots on Ridgeway.  The night before they ran the public auction for Edgemont Securities, the selling agent threw an opening gathering on the park grounds, with a concert by the "Lawson Auction Co. Jazz Band" as the main event.  This southeast corner of Alston and Linwood - lot 47 in the subdivision as shown above - sold the next morning to a mill hand-turned-investor, Arthur T. Crutchfield.  It does not appear Crutchfield succeeded in erecting a structure on the lot, as its first residents appear only after he sold it to a larger-scale real estate player and neighboring land owner, B. W. Harris, in the middle of the decade.  The 1927 City Directory is the first to list tenants in the duplex Harris likely had built: J. Carmel and Vueni Colclough on one side, Frank M. and Lois Cunningham on the other.  Both men were said to be employed as machine operators at an unspecified plant (the closest factory would have been the North State Knitting Mills a few blocks north).

White, working class folks would remain the predominant demographic on South Alston for some time, but the story of the duplex at 801 shows complexity amidst the strictures of segregation.  In 1928, shortly after this house was built, Harris sold the property to Dr. J. W. V. Cordice and his wife, Pearl.  Born in the British West Indies and trained at Howard University Medical School, Cordice and his family had come to Durham in 1925 for him to join the staff at Lincoln Hospital.  In addition to the family home on Fayetteville Street, Cordice owned the building where he established his practice, and a few properties like this one as investments.

At left: an unidentified man - perhaps Dr. Cordice himself - stands at the entry to the physician's private practice at 711 Fayetteville Street, likely in the latter 1920s (Duke University Special Collections, online via Digital Durham). At right: Dr. Cordice in portrait submitted with immigration documents in 1940 (State Archives of North Carolina).

The Cordices were certainly not the only prominent African American family to supplement income through real estate investment, but more research is required to establish how widespread the leasing of Black-owned properties to White tenants would have been in this era.  Then as now, property ownership would have been public but little known information, and this duplex was advertised for rent through White-owned City Real Estate (with offices in the Geer Building downtown).  At the same time, the eastward growth of Hayti towards what had been the African American section of East Durham - extending south of the railroad towards the school on Sowell Street - seems to have turned the Alston Avenue corridor into an unusual outpost: depending on perspective, a scene of relative (if accidental) integration, or an isthmus of White settlement boxed in by Black neighborhoods. 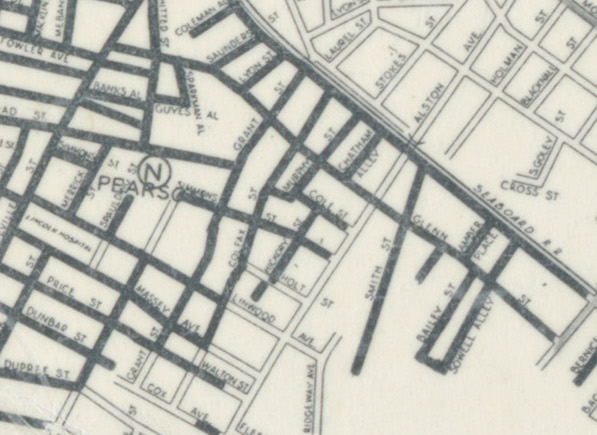 Fragment of a 1937 Department of Public Works map, unsubtly representing the racial makeup of the area. Note the stark contrast between Black and White-majority settlement on the two sides of the railroad, with the exception of Alston Avenue cutting diagonally through the middle (full map available via Digital Durham).

While the Cordices would sell this property in 1940 to Rufus and Mattie O'Neal - a White couple who lived in one half of the duplex, rented the other, and at least briefly ran a grocery here - broader trends began to transform the area in the years after this map was made.  Complaints about abhorrent conditions at the nearby East Durham 'Colored' School led by the fall of 1939 to the construction of a new, larger, Burton Elementary - still intended only for African American students in the segregated education system.  In the meantime, the proliferation of new housing developments during and immediately after the Second World War (many with explicit racial covenants inviting White families while barring others) provided options to those looking to leave the area. The McCollums, an African American family living on Dupree Street, purchased this property in the fall of 1948, but the real tipping point seems to have come a year later with the announcement of a large-scale "Negro Housing Project" just to the southeast - what would eventually become McDougald Terrace.

The reverse street index at the back of Durham city directories - which denoted race with asterisks or "(c)" through 1951 - offers a superficial but stark demonstration of how South Alston changed.  In the 1949 edition, all of the residents and business owners on the 700 and 800 blocks on either side of Linwood were listed as White.  After a single year reflecting flux, African Americans made up all of those listed in the same area by time of the 1951 printing.  This change coincided almost exactly with the widening of Alston to become part of the State Highway NC-55 thoroughfare.

William and Eunice Mitchell lived at 801 South Alston Avenue with their five children in the early 1950s, overlapping for at least a time with Anderson and Quennie Fairley in the other half.  William Mitchell was an auto mechanic, while both of the Fairleys worked for Liggett & Myers Tobacco.  After her husband's passing in 1961, Mrs. Fairley would remain here for over two decades, likely the longest-tenured resident of the home.

Not long after the first photograph at the top of this page was taken, the building was demolished.  It has remained a vacant lot for several years, but digging for a new foundation is underway at the site as of mid-2022.