2116
Duncan Street
Durham
NC
Cross Street
Nelson Street
Year built
1930
Architectural style
Bungalow
Construction type
Frame/Masonry
National Register
College Heights
Neighborhood
College Heights
Use
Residence
Building Type
Residential
Can you help?
You don't need to know everything, but do you know the architect?
Log in or register and you can edit this. 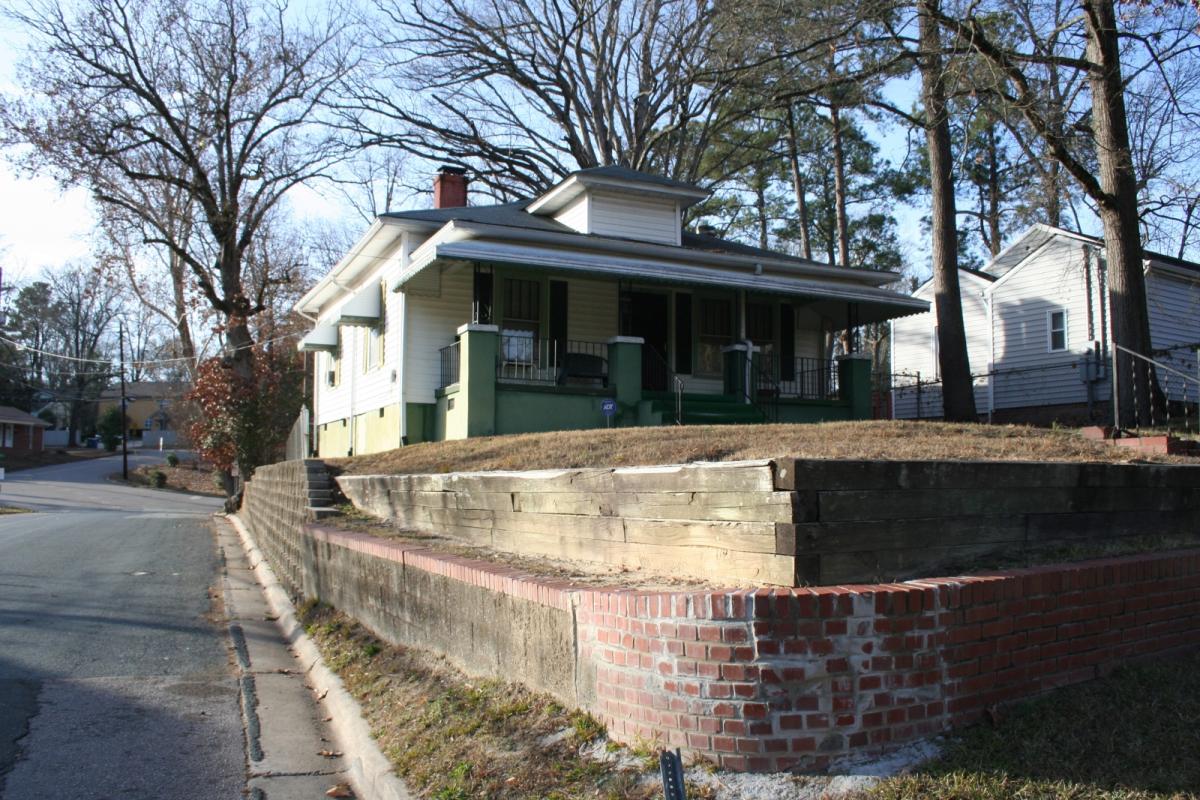 Raised slightly above street level at the northwest corner of Duncan and Nelson Streets, "this one-story, hip-roofed bungalow" is described in the National Register Historic District application as being "three bays wide and double-pile. It has vinyl siding, four-over-one Craftsman-style wood-sash windows, and a four-light-over-four-panel door, centered on the façade and sheltered by a full-width, hip-roofed porch on decorative metal posts on brick piers with a metal railing between the piers. The house has two interior brick chimneys and a blind hip-roofed dormer on the façade. There is a hip-roofed ell at the right rear (northwest) with enclosed hip-roofed porches to its south. An entrance to the enclosed porch is sheltered by an aluminum awning and accessed by concrete steps. A brick retaining wall extends across the front of the property with a second wood retaining wall above it and brick steps with decorative metal railings leading up from the street. A concrete block retaining wall extends along Nelson Street to the south. The parcel extends through the block to Concord Street and a prefabricated metal shed stands at the west end of the lot. The earliest known occupants are Furman Howard, a laborer, and his wife, Minnie Howard, in 1930."

In city directories for 1956 and 1958, Anna Massenburg, a clerk at North Carolina Mutual Life Insurance Company, was listed as the occupant of this residence.  According to Durham County property records, the house was sold on July 21, 1958 to Robert Haymer and his wife, Jerdeane.  The deed shows they purchased the home from G.W. Logan, Jr., well-known owner of the Regal Theater in Hayti, who lived at 618 Massey Avenue.  Mr. Logan had inherited this property, along with a few others, from his father, George Washington Logan Sr.

Robert Haymer was a factory worker, while Jerdeane was an employee at Duke Hospital.  They have three sons.  More than sixty years after purchasing it, this home remains in the Haymer family.