218
Argonne Drive
Durham
NC
Cross Street
Woodside Park Lane
Year built
1891
Object Type
Cemetery
Neighborhood
Northern Durham
Can you help?
You don't need to know everything, but do you know the architect?
Log in or register and you can edit this. 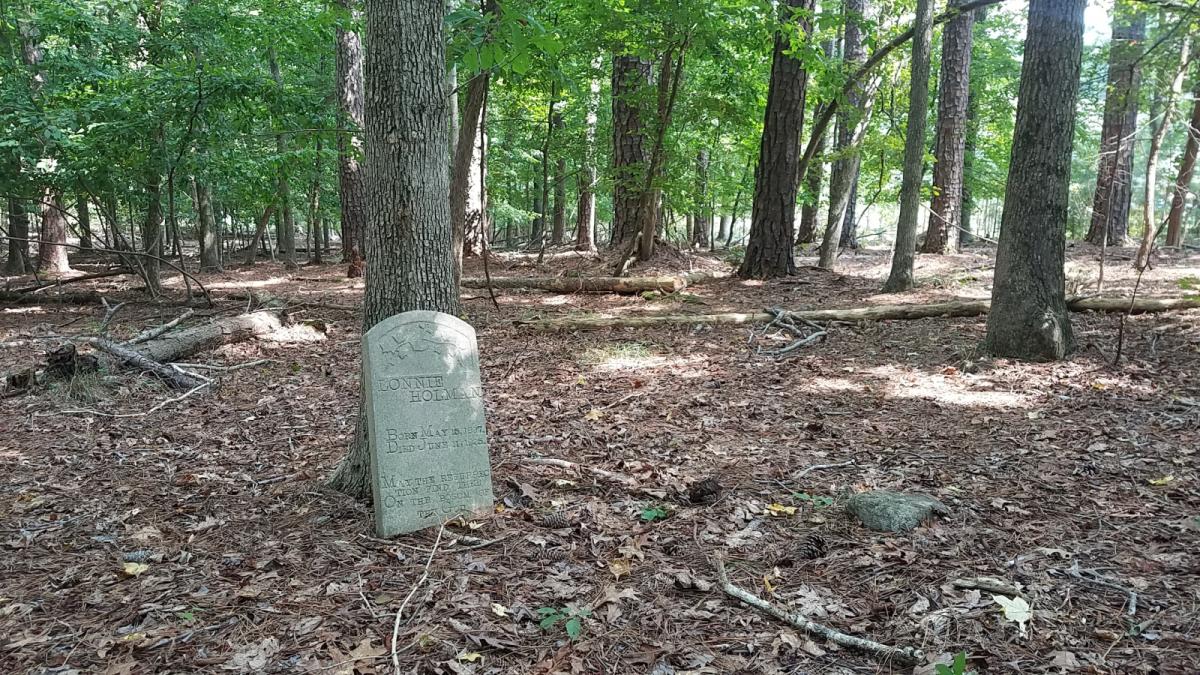 In a wooded area nestled against the edges of the Horton Hills and Argonne Hills subdivisions, this untended burial ground appears to be linked to the family of Dilsy Holman and her descendants.  Likely born enslaved in the 1820s, she and her offspring first appear by name in the post-Emancipation censuses of 1870 and 1880.  A deed from 1878 indicates she purchased 88 acres of land here near the Eno River from James Pool.

Some key details of the family history remain to be established - particularly whether Dilsy was connected to Holmans (sometimes rendered Holeman) who were formerly enslaved at Stagville or further north in Person County.  Her children married members of several other families who had settled in the area just south of the Eno River between Mill Grove and Guess Road: Craig, Green, Hopkins, and McCown.  Only two legible markers were visible in the cemetery during an August 2021 survey, but a discernible pattern of grave depressions - many of them clearly marked with fieldstones - suggests fifty or more individuals may have been buried here. 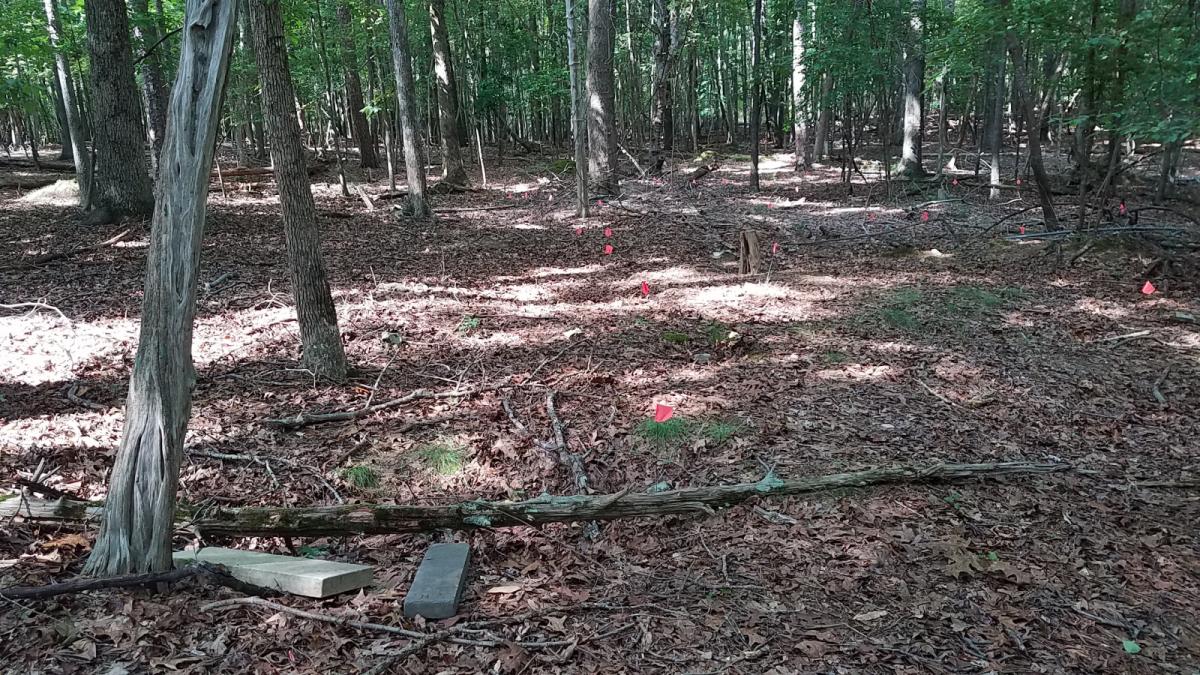 Information from death certificates has helped link 9 names to the cemetery (see the recently updated page on FindAGrave).  Eight of these individuals have clear family ties to Dilsy Holman: her three sons, a daughter-in-law, and four grandchildren.  Durham County only began collecting death certificates in 1909, so any burials in the preceding decades would have gone undocumented.  The presence of the above-pictured Hall marker and the overall number of likely graves, however, suggest that this may have been a burial ground for a larger community.  Indeed, Dilsy Holman transferred a small parcel near this edge of her property to the Mill Grove Church in 1886, and subsequent deeds seem to refer to this as the Mill Grove Cemetery lot.  That name is generally associated with a congregation and school just to the south and east near the present-day intersection of Roxboro and Denfield, but it is plausible that the toponym previously extended this far (in the direction of the nearby mill).

In any event, before she passed away - apparently in the latter 1890s - Dilsy transferred ownership of her farm to her son, Columbus ("C.C." or "Lum") Holman.  He and his siblings appear to have remained in the area working the land, and are surely the Holmans noted as property owners here on the C. M. Miller map of the county from the 1910s.

Holman family farmsteads - likely for Columbus and his brother, William - highlighted on a fragment of the Miller map, c.1910s (full versions available online via UNC and Duke).  Among other landmarks in the area, the Holmans lived close to E.J. Parrish's Lochmoor estate across the Roxboro Road and just south of the McCown-Mangum House (labeled as "Mrs. Mangum" here, now a part of the West Point park).

After Dilsy Holman's children passed away in the 1920s and 1930s, it is unclear if the farm remained active or the cemetery in use.  At present, the last documented burial is that of her grandson, Paul Holman, who died in April 1936 - just months after his father, William.  Relatives who remained in the area appear to have been interred at nearby Mt. Level Church, where they may have worshipped.  Inheritance of the family land went unresolved after Columbus Holman and his wife, Delia, died in 1925 and 1926, respectively.  To purchase the remaining 71 acres in 1952, Mary Dunnegan Belvin had to assemble signatures from more than forty descendants, who by then had spread across North Carolina and as far as New York. 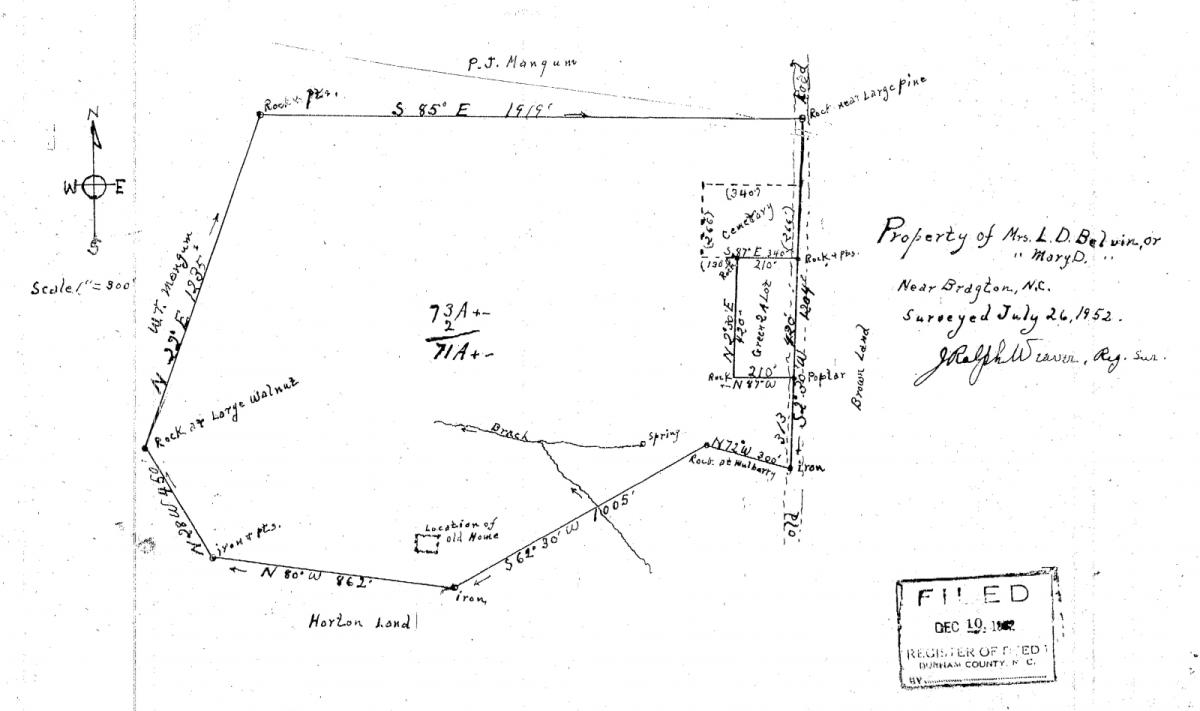 Plat map showing the Holman lands acquired by Mary D. Belvin in 1952 (Durham County Register of Deeds). Note the clear marking of the cemetery lot. The two acre parcel adjacent to it remained in the family of Luther Green, whose son had married one of the Holman granddaughters.

As the Argonne Hills neighborhood began to develop just east of here - between the former Holman property and Roxboro Road - the cemetery remained for years at the edge of a largely wooded area spreading north and west along creek branches to the river. 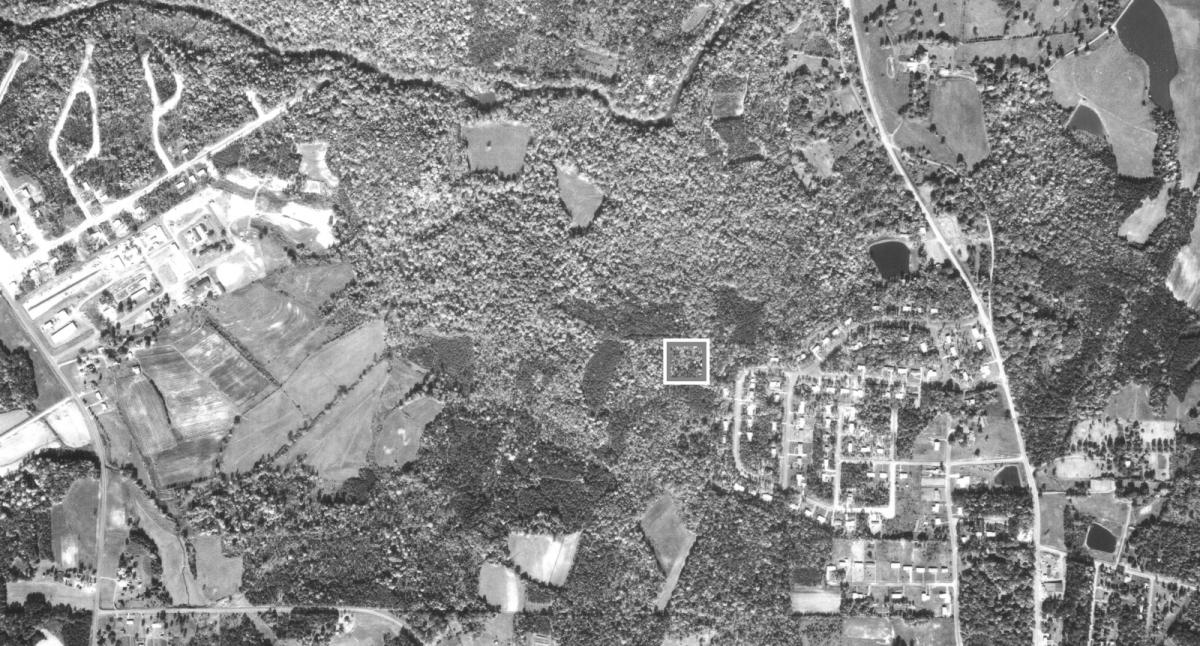 Fragment of 1966 USDA aerial photo showing the approximate location of the cemetery - the white box - near the emerging Argonne Hills neighborhood (Full images available via Duke Libraries). Also visible to the west along Guess Road is the Prison Camp complex, constructed in the 1930s.

After Mary Belvin's death in the 1970s, the surrounding land sold to the Karis family.  The Horton Hills subdivision began in the mid-1980s to the south, progressing in phases until its current northernmost section along Woodside Park Lane reached the southern edge of the cemetery in the 2000s.  Despite unclear ownership and limited upkeep, the site retains a certain peaceful dignity - an important monument to the legacy of an African American farming family and their community even as the area has been significantly transformed.  Informal trails between the adjacent subdivisions and the West Point on the Eno park allow relatively unobstructed access.

Development plans for the significant band of remaining land between here and the public park - many years and iterations in the making - have understandably raised concern among neighbors and environmental groups worried about the impact on the nearby river and its tributaries (see the site put together by a group of opponents, referring to the area as Black Meadow Ridge).  The presence of the Holman Family Cemetery also makes this a historic preservation issue. 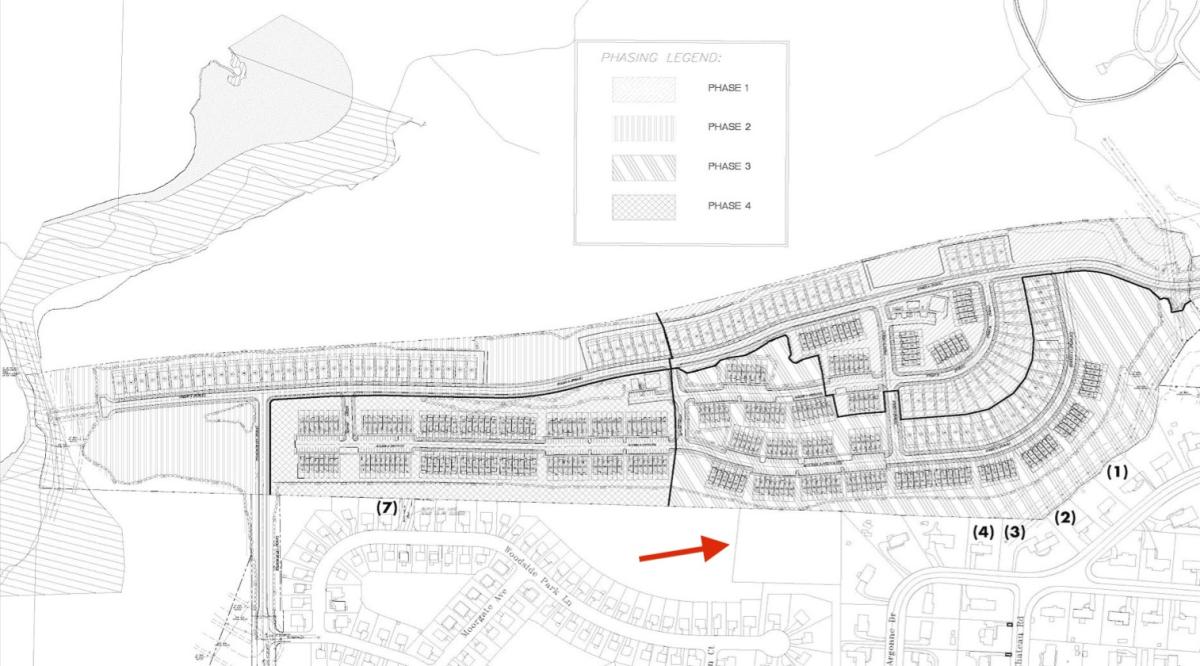 Proposed development site plan with the location of the cemetery parcel indicated by red arrow (Source: Documents submitted to Durham Board of Adjustment).

While plans are always subject to change, it certainly appears that the proposed development would further wedge this cemetery between unsuspecting neighbors' back fences - a sad situation all too common as our city has expanded.  At the very least, a careful survey of burials - which appear clustered quite near the northern portion of the parcel adjacent to proposed construction, and might not fall neatly within the established property line - seems imperative before clear-cutting that might result in damage to the fragile site.  More than that, it would be nice to see stakeholders come together and consider how any development might respectfully incorporate and facilitate access to this historic cemetery.  We have far too frequently erased sites that testify to the long and rich legacy of African American life in and around Durham.  As a mark on the land where a recently emancipated family built new life and honored their lost loved ones, the Holman Cemetery deserves better.

Inscribed markers for Seal Hall and Lonnie Holman are just the beginning of the history this cemetery holds. A rusted courtesy marker (center), along with dozens of fieldstones and unmarked depressions, suggests connections to many more stories. (August 2021, N. Levy)