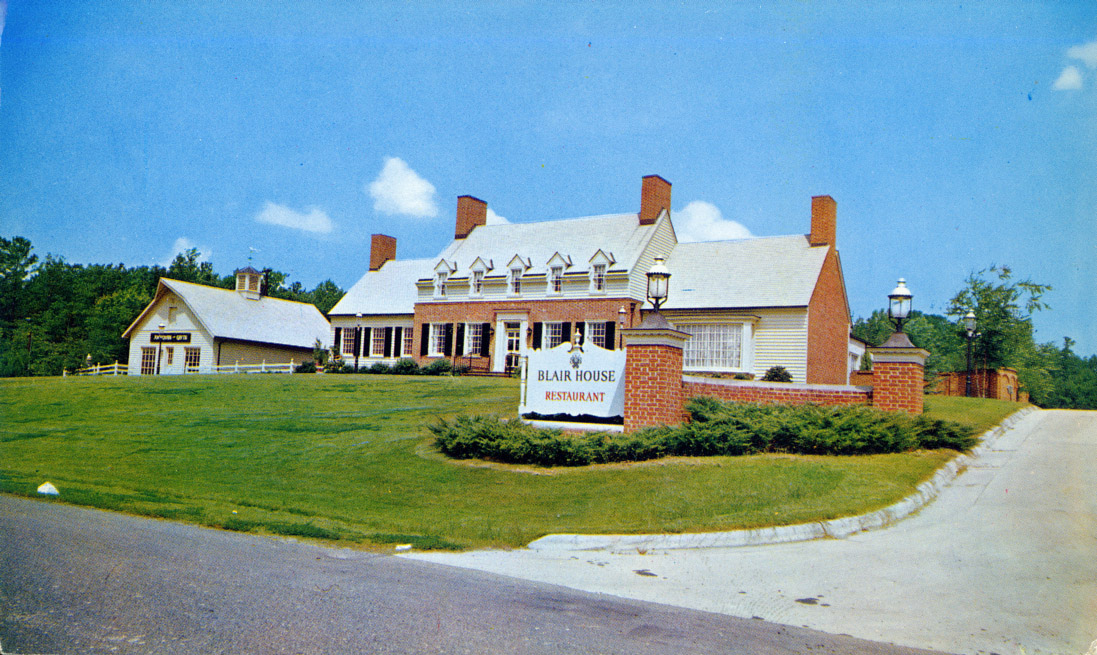 BLAIR HOUSE on US 15 and 501 between Durham and Chapel Hill, North Carolina.

Blair House likely opened in the late 1950s, after the construction of Chapel Hill Boulevard. I know little about it. The Herald referred to it as "Country Inn" in the below 1960 photos. 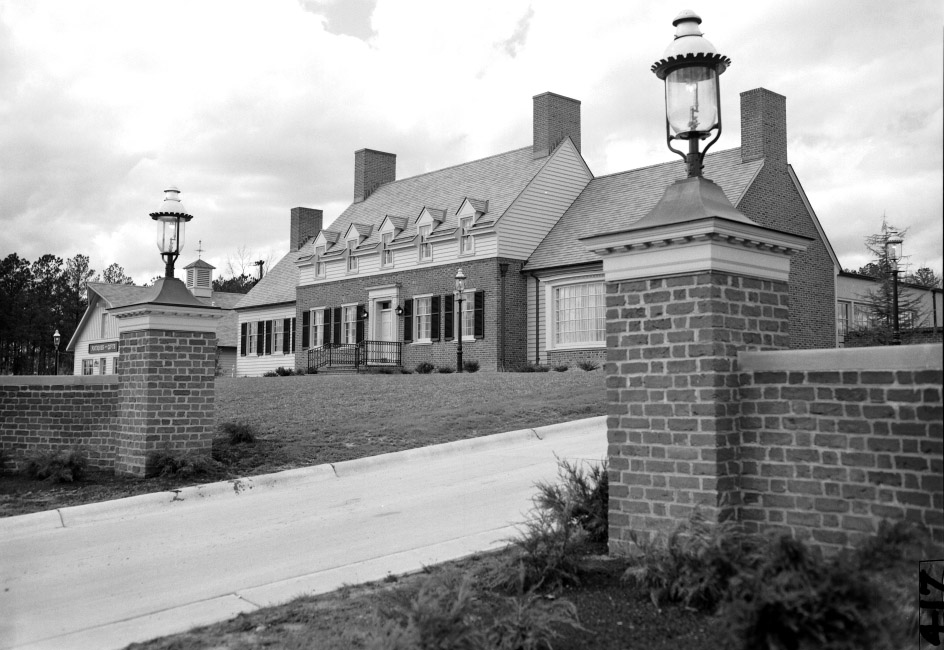 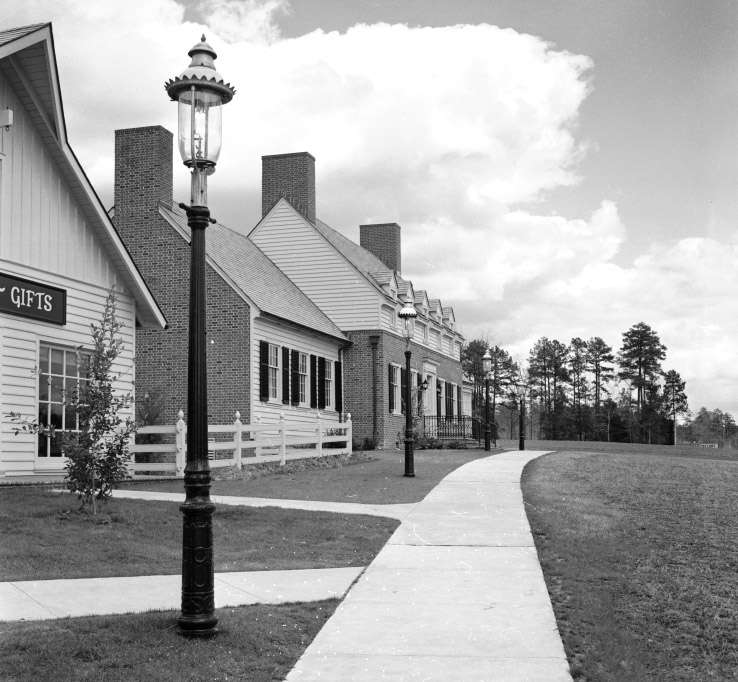 By the early-to-mid 1970s, it had closed, and the building(s) had become "Blueberry Hill" - which may have been Durham's first bar for the gay community. (The "Electric Company" in Chapel Hill had been the first in the area - where the Cave is currently located, opening in, I believe, 1971 - just two years after the Stonewall demonstrations.

The small barn to the left was a bar unto itself - in 1974, it was called the "Royal Elbow" 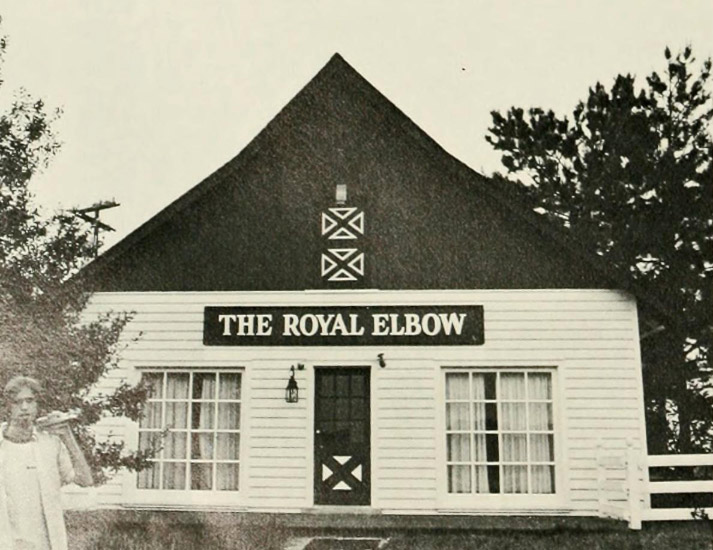 I don't know how long Blueberry Hill stayed in business. South Square was built across the street in 1974, which hastened the demise of all the motels and other establishments on the northern side of 15-501, as the land became more profitable for retail. 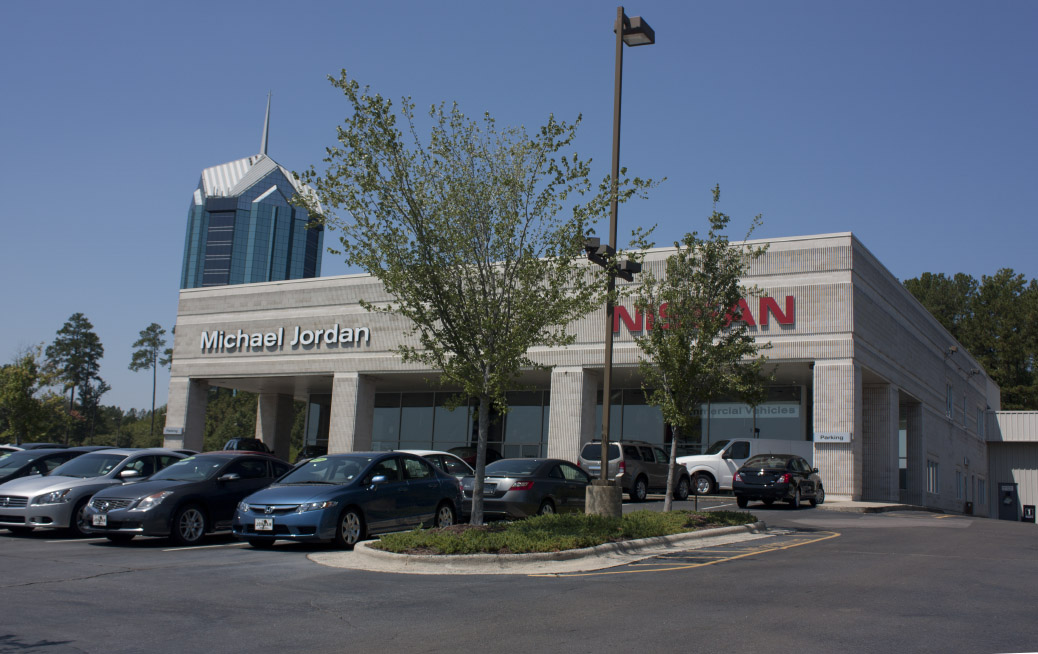 Blueberry Hill was Durham's first "explicitly" gay bar.  Prior to it's opening there were gay operated bars, but they weren't what we now think of as gay bars.

Chapel Hill's "Electric Company" was the second gay bar in Chapel Hill and occupied the site of the current Trader Joe's in Eastgate, after it closed as a bowling alley.  The first gay bar in Chapel Hill, in the location of the Cave, was "Pegasus" and opened in 1969.  Prior to that, the old "Tempo" on Franklin street was the mixed bar for the area.

Hi,  great website.  The Blair House was open as of July 1981 when my wife and I had our rehearsal dinner.  A very nice place.

Yes, Clowns Inn was in

Yes, Clowns Inn was in the basement of the brick building next to the building where Francesca's Italian Cuisine & Café (not to be confused with Gelato) was located at 2530 Erwin Rd. Prior to Francesca's it was a Bull City Subs (I think) and prior to that, in the '80s, it was a First Union National Bank. A quick check reveals, therefore, that the brick building housing Clowns Inn is located at 2526 Erwin. I think its tenants now include a Subway sandwich shop and a Stop'n'Go convenience store. For whatever reason, Duke redevelopers have not yet sucked up this property and turned it into the mixed use places now surrounding it. Clowns Inn was the go-to place when there was nowhere else to go (earlier in the evening and midweek, when the bigger bars were slow/closed). The story I'd heard was that the owner, Tommy, had been a clown so had all that horrid memorabilia. Upon navigating the treacherously steep back staircase to get to the entrance (many a drunk tumbled), you'd pay See more...

Michael, Electric Co. was where

Oh, the building that Herb's

Oh, the building that Herb's was in was torn down...not too long ago. It was on the same side of the street as the transmission and cab co is. It appeared to be one floor from the street but had a full basement that was never opened. He painted the ugly cinder block walls with glitter. Poor Herb, sweet man with no taste! - Michael

Gary, The Clown's Inn was

Gary, The Clown's Inn was in the basement of what is now, or the last time I checked, the convenience store next to the BP station on Erwin Rd. Christophers was located on Chapel Hill Blvd where the last time I checked was a Chinese Restaurant...on the service rd leading to Loew's and what used to be Border's books. Boxer's, of course, was at 5504 Chapel Hill Blvd at Straw Valley from October 89 through October 2000. Finally, The Electric Co was where Southern Seasons is now. - Michael

Herb's was at 530 Foster St. You have a picture of it on ED under that address.

Thanks for all of the

Thanks for all of the good information, Michael All - I'd like to better understand where some of these places were - Herb's - on the corner of Hunt and Foster? Which corner? There is only one building on that corner now - Cole's Transmission. Clown's Inn - where on Erwin Road was this? (In relation to what is there now.) Where was Christopher's? The Refuge - upstairs from Francesca's (where I believe Scott Faber's photography studio is as of 2011) ? Thanks GK

Some clarification from someone who

Some clarification from someone who was there: The bar in the basement of the then Jack Tar Hotel was run by Herb Rigsbee, a very good man. It of course welcomed everyone but was very much THE gay bar in Durham. When the hotel was to be demolished, Herb moved the bar down the hill. This was Herb's Bar or lounge...and what a trippy place it was! Sometimes it was really happening...but most of the time you would sit next to an attorney on one side and a gravedigger on the other...quite a mix! The stories I could tell. Later, Herb's estranged lover, Tommy Thompson, opened The Clown's Inn...another basement bar, this time under a pizza place on Erwin Rd. This was around 1972...at the same time that the song Send In The Clowns was current. Tommy filled the place with tacky tacky clown figurines holding balloons etc. He did some decent business for a while. Herb countered this by opening The Refuge on 9th St. It had a modest dance floor and it also did some business for a while. Herb was someone who was a very good friend of mine. I loved him. He had some difficult years and apparently went to prison over some bad checks. When I was preparing to open Boxer's, he and his prison boyfriend came by to help me and give me advice. I have a picture of him there that I cherish. Tommy was also a good friend and loaned me the old cash register from The Clowns Inn to use for Boxers...as well as provide me with important business contacts. That was the sort of spirit that the gay community had back in those days. As for Blueberry Hill, this was opened by Bruce Derbin. I was there opening night and it seemed almost ridiculous...how grand it was. This was when the drinking age was 18...DWI laws weren't quite as severe, long before HIV. So, these place had huge business...massive crowds of gay people...and friendly straight people as well. Blueberry Hill had a piano bar, a dance bar, a restuarant...and the first large screen projection TV I had ever seen..with a whole room to itself...where on a Saturday night everyone would watch The Carol Burnett show. Later, Bruce opened the original 42nd Street...which he sold a few years later, and it became The Power Co. Pegasus was the first gay bar I ever went to. I was 15...and no one cared. It was where The Cave is now. It felt very chic to go there...though it wasn't much. The owner was Glen Rowan, much loved. He was famous as the first person in this area who had AIDS. It was frightfully tragic. - Michael Penny Owner - Boxer's and Ringside

@Keith: After the conversion of

@Keith: After the conversion of the Electric Company to a gay club in late 1972 or early 1973, Chapel Hill or Durham had at least one large, gay dance club for more than twenty years until Power Co. closed in the mid-1990's. The sequence was: Electric Co,

Dukes of Durham was an

Dukes of Durham was an early spot at Jack Tar downtown, just before the implosion. There was Herb's Lounge on the corner of Hunt and Foster, later moving upstairs, where Francesca's is now, on Ninth Street. I worked at The Delicatessen (short-lived) in 1978, the small building next to Blueberry Hill and also at The Electric Co. in Chapel Hill in 1975. Amazing era in the triangle at that time.

Just a note that 42nd

Just a note that 42nd Street was located in the back of 315 West Main Street, current location of 'Teasers Palace' It later became the Power Company. GK

Thanks Gary (and John Martin)

Thanks Gary (and John Martin) for the piece on Blueberry Hill. I never went to Blueberry Hill although I remember the building. btw John, how does Clown's Inn on Erwin Road figure into the sequence of gay bars in Durham? It and 42nd Street were the first gay bars I went to, although I heard the owner of Clown's Inn ran the basement bar in the Washington Duke (Jack Tar) hotel that was known to be a gay hangout. Keith Bowden

I have a vague recollection

I have a vague recollection of going there in the late '60's. For some reason I remember the antique/gift shop directly to the left in the picture. But it was not on the college 'eating good' circuit which was pretty much Angus Barn and Hartmann's. Off topic, but was sad to hear about 'The Rat' in Chapel being closed several years ago after a 50 year run. Lifetime supply of grease in just 2-3 gambler specials!

The same niece went on

The same niece went on to work at Nissan later...I worked for her part time there too.

My niece was an account with The Blair House for awhile and I would go in every so often and work as hostess for the lunch shift. Wonderful food.

Like always, more cars and more asphalt in the recent photo.

The Electric Company was at

This was originally built as

This was originally built as a Schraft's Restaurant and was very elegant and quite good !

I was a senior at Carolina in

I was a senior at Carolina in 1964. My sister and my girlfriend (future wife) were juniors. They took me to dinner at Schrafft's (later Blueberry Hill?). It was a nice place and we enjoyed the meal. The main thing I remember is that they stuck me with bill. I remind my wife of that from time to time. Had most of my meals on campus and at the Port Hole.