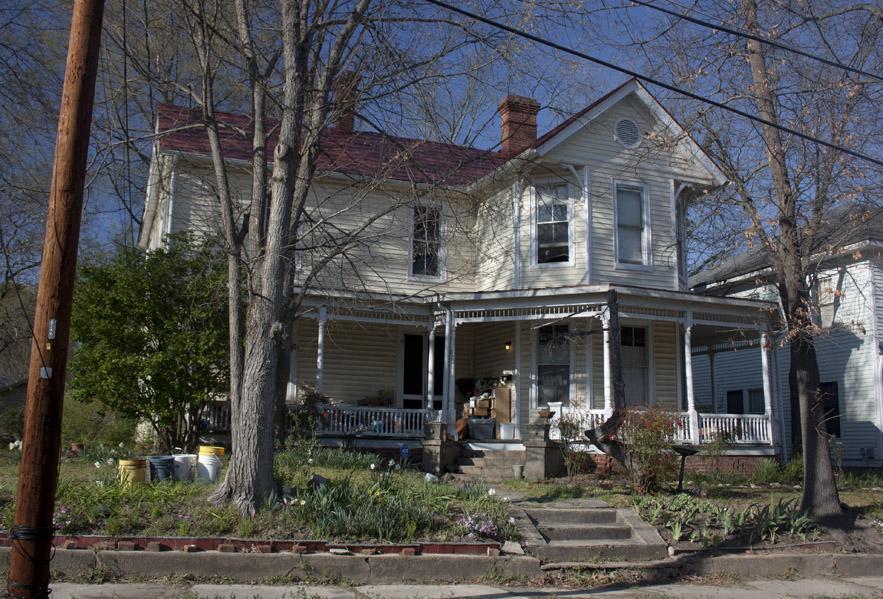 From the historic inventory:

This two-story frame house is one of the oldest and most distinctive houses in West End. Its form, characterized by wings terminating in three-sided bays, is accentuated by the carefully detailed one-story wraparound porch that follows the contour of the south and east elevations. The porch elements consist of turned porch posts with sawn spandrels, turned balusters in the railing, and a spool frieze with a scalloped edge. The house should be noted for its restored exterior which retains its original patterned tin roof and interior chimneys with tall corbelled stacks. The [owner of the house in 1980] was the recipient in 1976 of one of the first annual awards presented by the Historic Preservation Society of Durham.

The house is one of the most historically significant in the area, having been constructed by William Thomas O'Brien. O'Brien moved to Durham from Virginia in 1881 to operate and perfect the Bonsack cigarette rolling machine for W. Duke Sons and Co.

By 1892, he was living in this house, situated on what originally was a large tract of land that extended all the way to Rome St. and included a servants' house, a smokehouse, and a chicken coop. O'Brien also was instrumental in establishing a Roman Catholic Church in Durham. Services were held in this house until the Immaculate Conception Church was constructed in 1906 on [West] Chapel HIll Street on land which he deeded to the congregation [and with additional monetary support from O'Brien for the construction of the original sanctuary.] After O'Brien's death in 1907, his widow moved to South Duke Street. By 1919, this house was occupied by the family of Edward J. Long, a carpenter and interior decorator, who lived here for many years.
Related People

Master mechanic from Lynchburg, VA, hired by W. Duke and Sons in 1884 to test and perfect the Bonsack machine, which gave the Dukes competitive advantage in the production of cigarettes. O'Brien was a devoted Catholic, and donated land and money for the establishment of the Immaculate Conception Church on West Chapel Hill Street.
Read More

This is one of those incidental structures that cuts to the heart of Durham's history. What a neat structure on its own merit, but to belong to W.T. O'Brien? I am a long-time student of Durham history (most recently, thanks to E.D.)as well as a Durham native. I knew about the houses of Ben Duke, J.S. Carr, James Southgate, R.H.Wright, textile and tobacco mill housing, and countless others, but I had NO idea this house existed. Unbelievable. Thanks Gary. I'm holding out on E.D.'s upcoming feature of Dr. Durham's Pandora's Box.

I meant that you FOUND Pandora's Box still standing! I would not be surprised with your sleuthing skills. ;-)

Every time I read about a structure that has such historical significance, it makes me more inclined to learn more about Durham's history. Growing up there, we weren't informed, or people just didn't care. When I move back in a few months (at least that's the plan), I look forward to seeing these sites in person. I also can't wait to get more involved in learning the history of Durham. It breaks my heart that some of the most beautiful structures were demolished, and for what? All I see are mostly parking or vacant lots!