The most impressive of the various 1930s apartment buildings of Trinity Park. 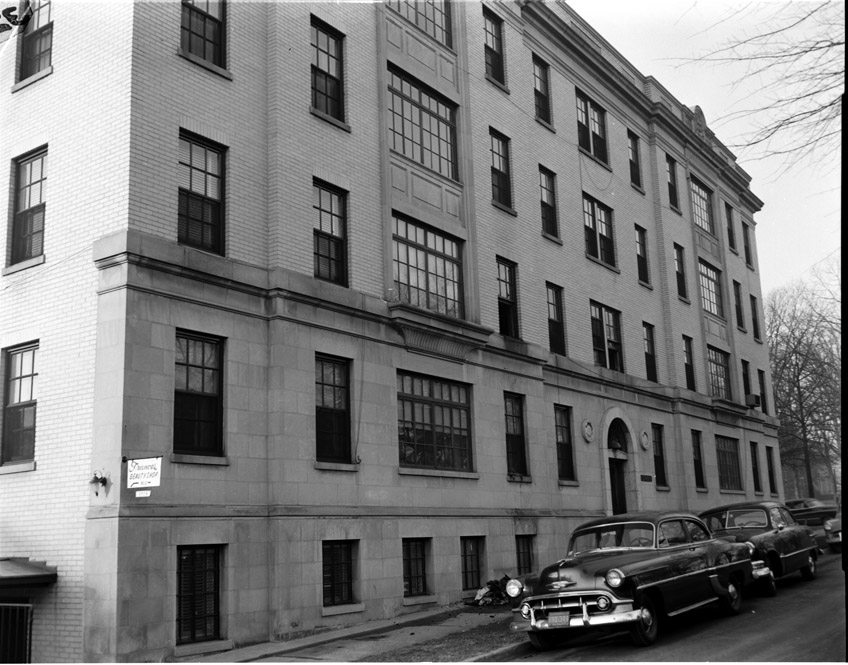 Although Trinity Park has some wonderful early-mid 20th century detached houses, I remain most intrigued by its relative abundance of early 20th century apartment buildings. Of those still standing, the Erwin Apartments are my favorite. The relative elegance of early 20th century apartment buildings when compared to the junky sameness that characterizes most apartment 'complexes' built from the 1950s to present is a relief. (I always think of the development process for most contemporary apartment complexes as such: developer buys raw land; developer hires engineer to lay out parking lots; developer hires architect to lay out the most number of units that can fit in the interstitial spaces around the parking lots.) It's refreshing when people figure out how to build at this scale again - like Scott Harmon's Mangum 506 (condos, not apartments, but that's irrelevant to the point.)

Designed by Durham architect RR Markley, and built in 1930 on the vacant southeast corner of West Trinity and N. Guess (Buchanan Blvd.) the four-story building is described by the historic inventory as "Modernistic":

"The sharply incised windows and the flat walls, occasionally broken by a projecting or receding plane, contribute to the austerity of the design. Decoration is reserved for the cornices, water table, and entrances, which feature a bronze fanlight grille and a cartouche at each side of the door. Large casement windows, a stone flower box, and a cartouche in the cornice mark the slightly projecting entrance bay." 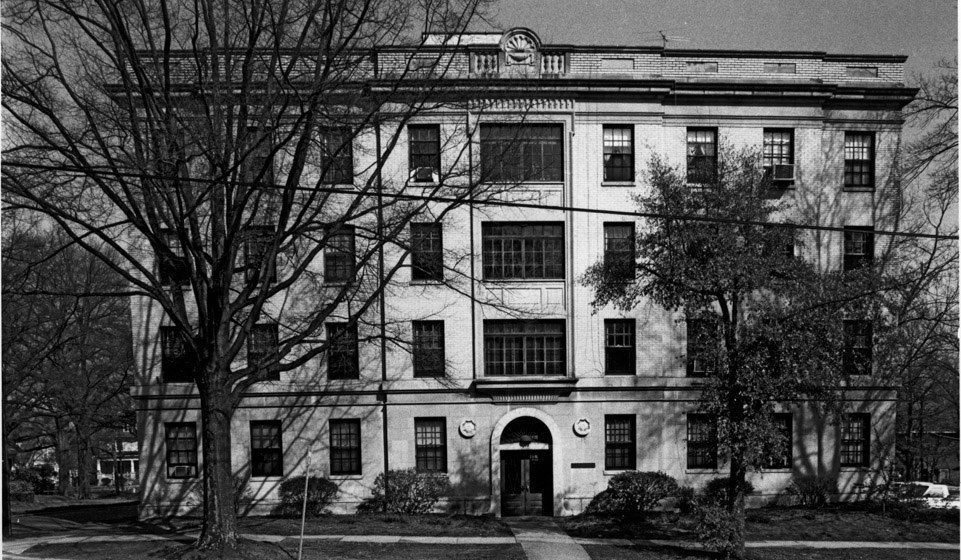 I find austere a bit too harsh of a word to use to describe the design - perhaps only with respect to the contrast between the modernistic style and the Art Nouveau style that preceded it (although never in great abundance in the US.)

Perhaps it betrays my urban leanings, but the Erwin Apartments seem like they would fit in well in some northeastern metropolis, where similar apartment buildings would line the street (if not replaced or atomized for a parking lot.)

I haven't been in the building since 1993, when I remember being enamored of its ancient elevator (even in helping friend bring a washing machine to the fourth floor.) I make no commentary on whether the property management is great, terrible, or somewhere in-between. (My pre-emptive disclaimer for the long comment from someone with a beef about their security deposit or similar.) But I love its appearance from the exterior, and the still-active (I believe) commercial space at the northeast corner of the building completes my affection for this structure. 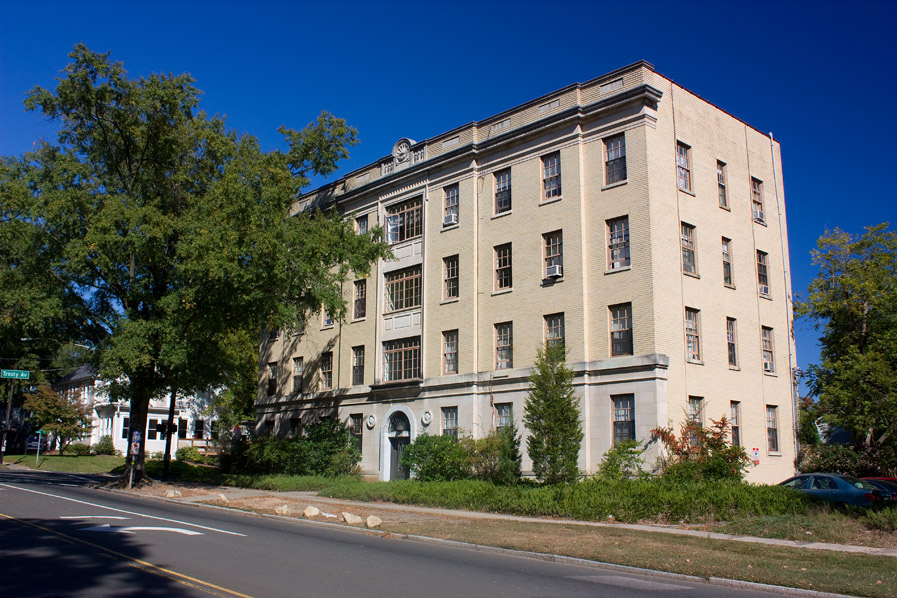 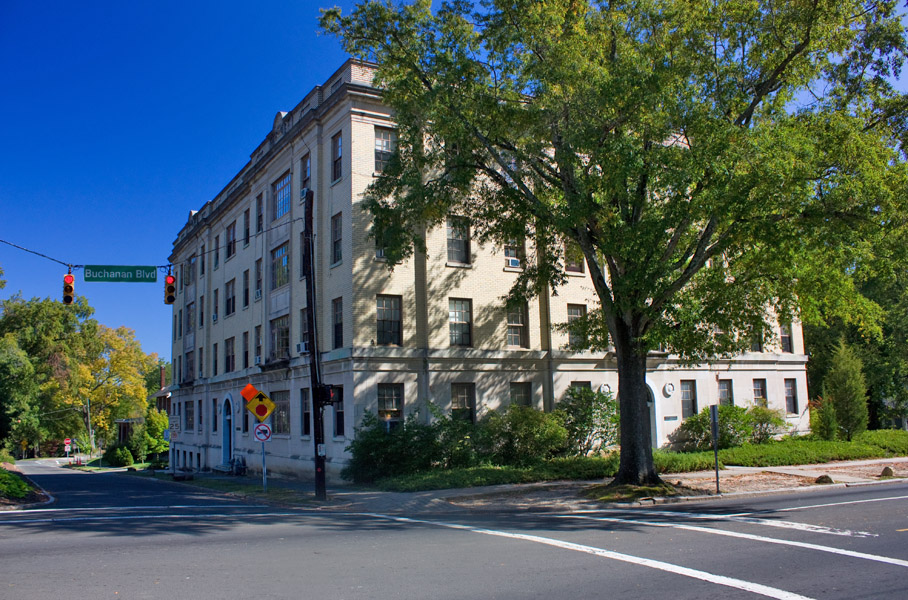 Unfortunately the building has suffered from a complete gut. they ripped out everything except the windows and the hardwood floors (they will most likely cover them up. The building is hollow right now there are no walls except for the stairwells.  They are putting all modern trends in which in the next 20 years will no longer look good (trust me look at a 1990s bathroom and kitchen in a 1920s house) they are completely changing the layout of the building and turning it into condos they ripped out almost everything interesting in the building there seems to be almost nothing left of the inside. But I saw them throw the what they called the waste in those dumpsters I wasn't letting those doors go to the landfill I dove in those dumpster after them and I salvaged them I took them to the ReUse warehouse for A new life some of those doors got salvaged for reuse. But then they started to cut the old doors up so they could fit down the trash chute I came with a screwdriver and salvaged the old mortise locks and saved them if you know of an old building that is going to have its windows replaced or going to be gutted or torn down try to salvage from the dumpsters you could end up saving historic building parts

Did you mean 'relevant' in

Did you mean 'relevant' in this sentence?

"It's refreshing when people figure out how to build at this scale again - like Scott Harmon's Mangum 506 (condos, not apartments, but irrelevant architecturally.)"

No - I meant that whether

No - I meant that whether they are condos or apartments is irrelevant to building at this scale.

One of the most amazing blogs

One of the most amazing blogs I have seen... I've literally spent my entire Criminal Law class pouring through the pictures and history that you've posted.

PLEASE keep up this work.

Very nice building indeed. Hey, now that we're talking about apartment buildings around town from the early 20th century...wondering if you know anything about the one near the intersection of E Geer & Mangum. it's a smaller scale 4 apartment from what it seems. The architectural details on this are awesome. Matter of fact, I believe there is another building around town or maybe near this one that looks like it may have been built by the same architect...You know which ones I'm talking about Gary???

Actually, now that I htnk

Actually, now that I htnk about it, both buildings I'm referring to stand in opposite corners...One on Mangum, the other on Geer...

I always loved that building.

Don't know what's happening commercially in the lower Northeast corner now, but from 1962 through 1966, there was a beauty shop there...where I had my hair cut. So convenient for someone livng in Aycock Dorm.

Good info on those buildings...So they were built on the same year but I wonder if it was planned by the same architect...Prob so...

This building is trash. It

This building is trash. It was trash in the thirties and is trash now. It was clearly developed as a cost cutting effort at housing people in some barely code compliant decorated box. Nostalgia does not mean good architecture. The dimly lit tenement style interiors created by a building like this were not even current in the thirties when more enlightened (no pun intended) design was apparent. Endangered Durham needs to draw the line at understanding and influencing good design, and simply appreciating something because it has been too big, and perhaps continually profitable, to be easily torn down.

I lived in 2 different

I lived in 2 different apartments in this building for almost 6 years of my time living in Durham.

I have to say I loved just almost everything about this place. The polished marble entrances, the ancient elevator (which when it worked was awesome), the unique tiling in the bathrooms, the sheer number of variations between the apartments and more.

I lived here from 2001 til 2007. I lived for 2 years in one of the extremely large and charming 1 bedroom apartment on the 2nd floor (that literally took up that entire side of the floor) and another 4 years in one of the tiny studio apartments on the 1st floor facing Trinity. The rent for the studio was SUPER cheap (i'm talking $275/month cheap - raised to $325 by the time I left).

I have nothing but fold memories for this place and the people that lived there with me.

I'd be happy to answer any questions you may have regarding it.

Hi Gerald, I recently saw this building while exploring Durham and fell in love with it. Your description of the place is similarly lovely. This is probably a long shot as it has been many years since you lived there, but do you have the name and contact information of those who are renting the apartments? If this message somehow makes it to you, I'll be delighted!

Did anything ever come of

Did anything ever come of this? I'm apartment shopping in the area and would love to hear honest opinions of this building.