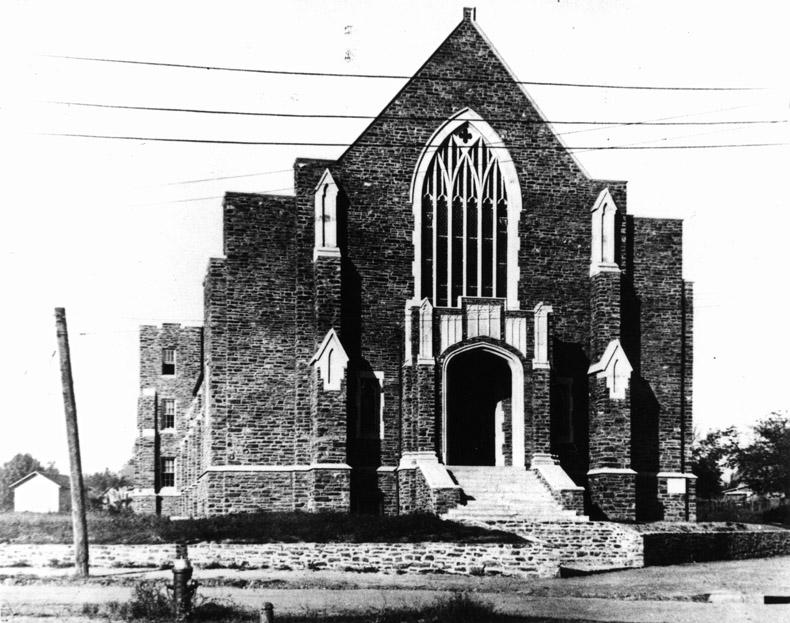 The West Durham Baptist Church located after 1897 on Alexander Avenue had seen its congregation grow to more than 800 by 1927. Rather than expand at the Alexander site, the church purchased a site at the corner of Hillsborough Rd. and 15th Street in 1933. The plan for a new gothic church, built of the same stone used to construct Duke's West Campus, was executed by Durham architectural firm Atwood and Weeks. Although construction began soon after purchase of the site, it was halted for lack of funds for a period, but resumed to complete the church by 1936.

In 1949, the church changed its name to Grey Stone Baptist Church to distinguish the church from the African-American West Durham Baptist Church. Several expansions of the church were performed in the 1960s, 1970s, and 1980s, including additions to the rear of the 1936 church building as well as parking lots.

Is this the one right across the street from LocoPops? I thought I recognized it, but wasn't sure.

Sara is down here in Wilminton this Thanksgiving and we have been discussing the ED, especially EK Powe School and the West Durham Baptist Church. Sara wants you to know that "Greystone" is an incorrect spelling as it should be "Grey Stone Baptist Church" using two words instead of one. See the Grey Stone official website: http://www.gsdurham.com/. Sara would appreciate your correcting the spelling on ED.

Thanks for all your continued good work and enjoy your break, which is well deserved. Sara and I met you at the Alabama Ave house on the OWDNA house tour.

I was baptized at this church. Five years old. I think I peed in the baptismal pool. I'll probably go to hell. When I was seven or eight I used to take my Sunday school money and go to the shop across the street and buy snacks. Yep, definitely going to hell...

Lawrence, I love this comment! Sunday was allowance day in my childhood home in DC. My brothers I and told our parents we we'd go to the ten o'clock service, while they went to the 11:30. We'd then go to GC Murphy's to buy candy -- and then meet our parents at the church's donuts reception, between the two services. Yep, definately doing to hell.

Where did you grow up in West Durham?

Spent many wonderful years at Grey Stone, my two children were baptized at Grey Stone.  Wonderful people and the soda shop across the street was well known for the best lemonaide in the world.

What a beautiful church! At twelve years old I went forward when Pastor Malcolm Smith gave the invitaion altar call. I accepted Christ as my Savior that day and was baptised there two weeks later. Pastor Smith was a wonderful man and I had great respect and admiration for him. I later sang in the Church Youth Choir and we went on a Summer Tour to Roanoke, VA and Wilmington. Wonderful memories of Grey Stone Baptist Church!