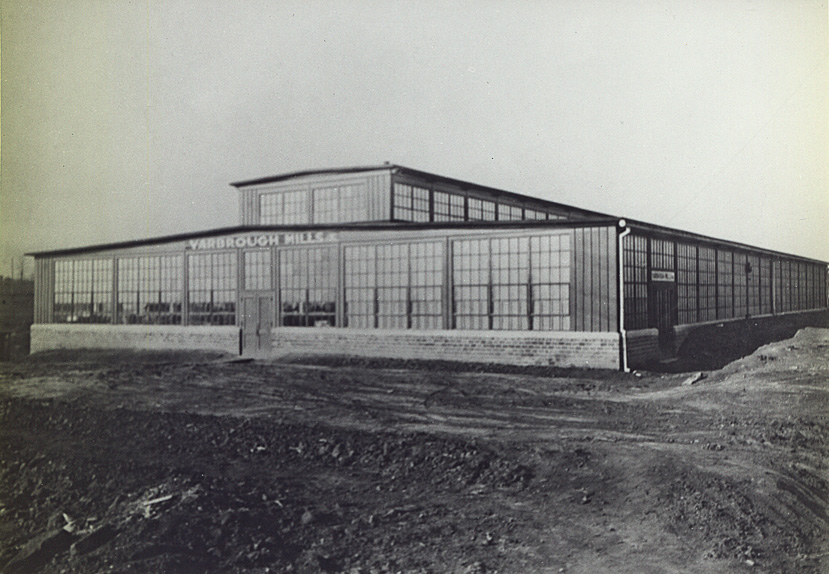 The Yarbrough Mill, a hosiery mill, was established on Calvin St., near Holloway St. around 1925. There is very little extant detail about the origin or operation of the mill. 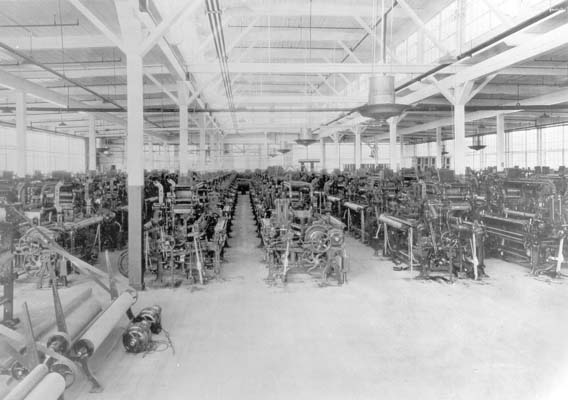 By 1929, the mill was out of business. In 1930, the building was taken over by Richard Wright's Automatic Tobacco Packing Machine Company. 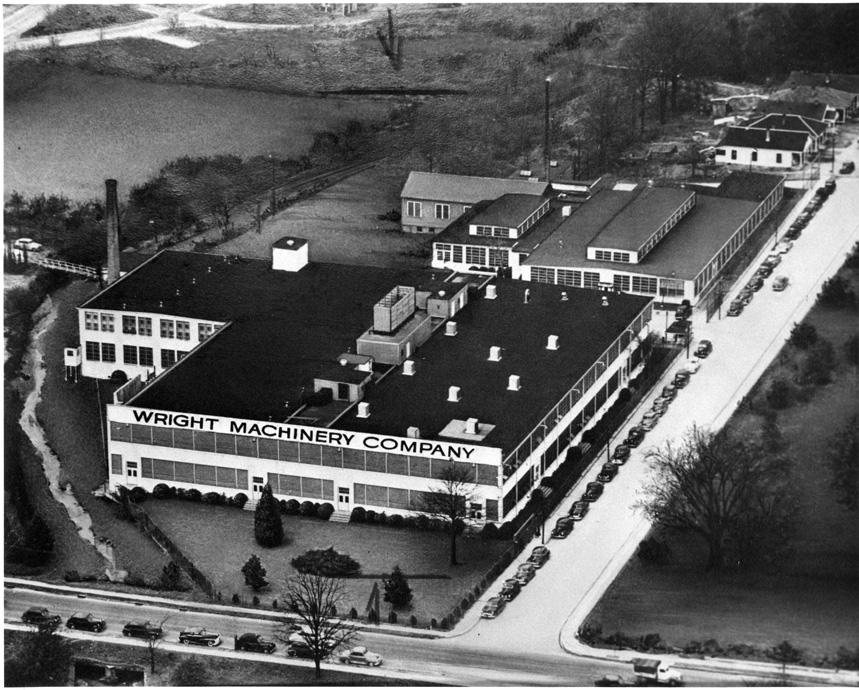 By the 1950s, the company was run in part by Richard Wright's nephew, a vice-president - also named Richard H. Wright. After the war, the plant had returned to manufacturing packing and wrapping machinery. 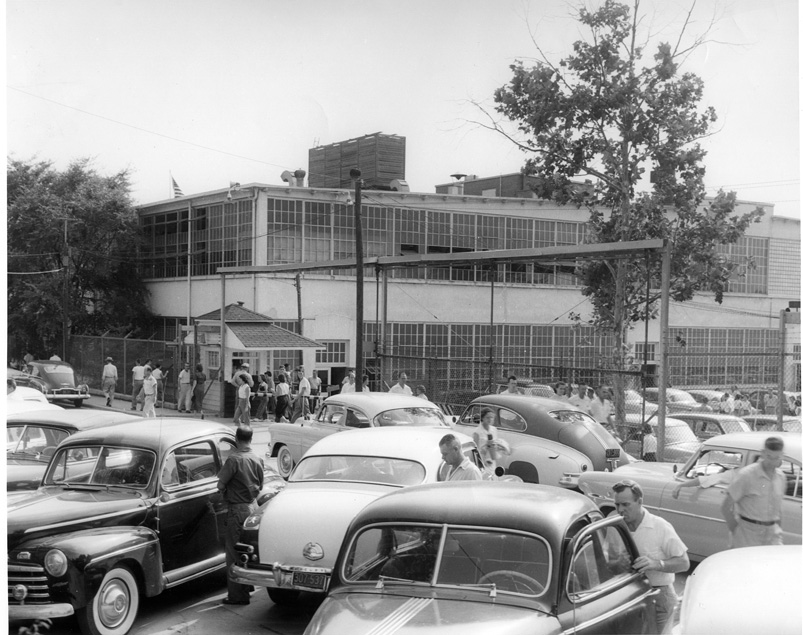 Strikes occurred at the plant in 1956. 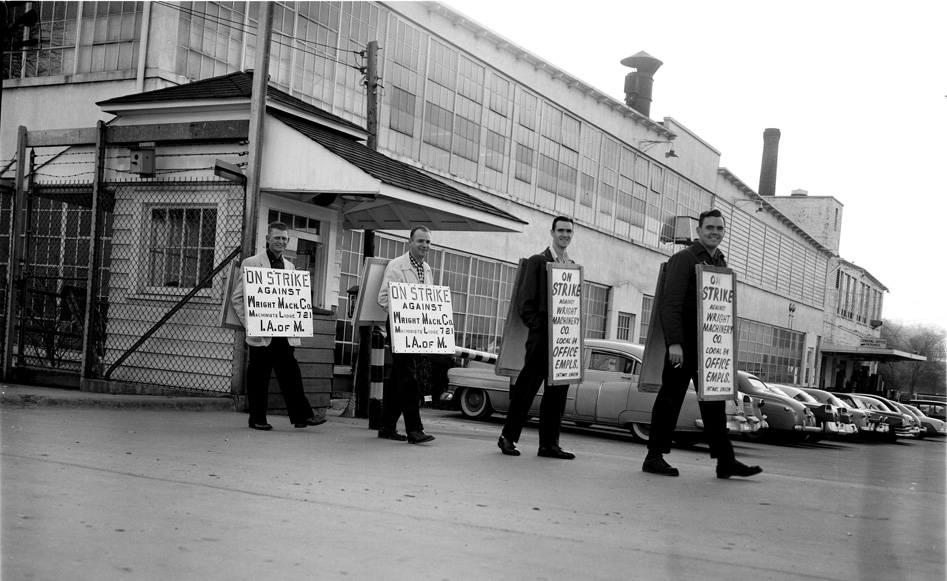 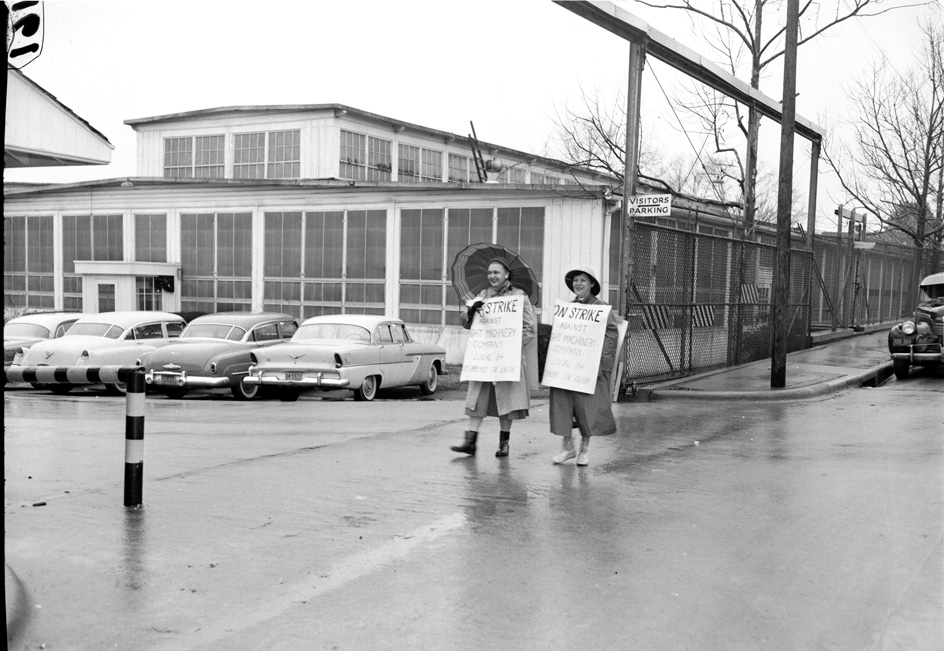 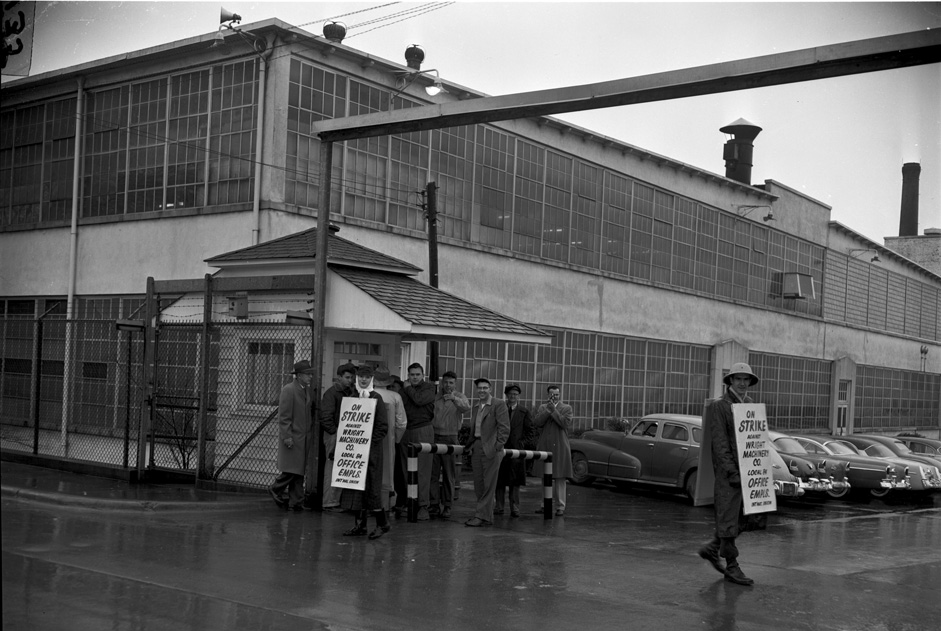 The company was still active at the Calvin & Holloway location into the mid 1960s. 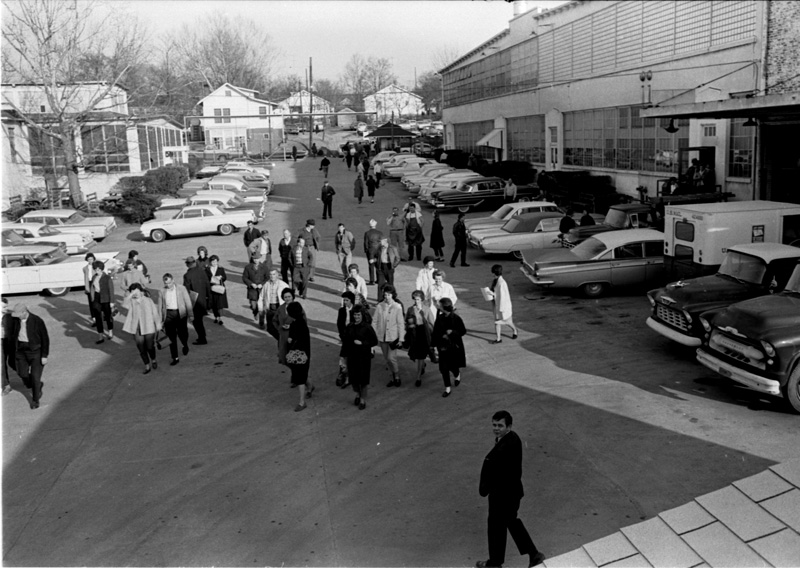 Looking east from near Goose creek, between the two buildings, 1966.
(Courtesy The Herald-Sun Newspaper) 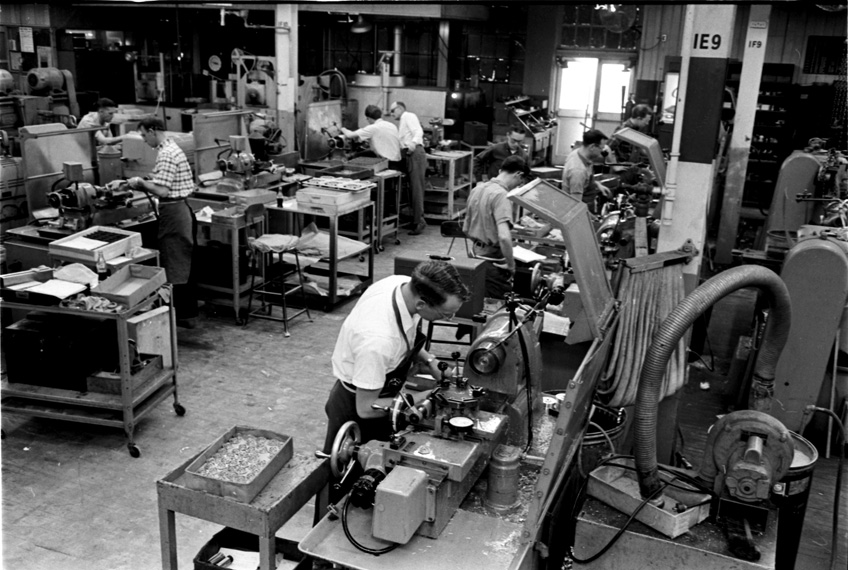 It is currently owned by "Yarboro & Hesee Warehouses, LLC". The city agreed in November 2008 to lease ~16,000 square feet of space in the warehouse for the District One police substation, which will include both the District One staff, and the community services division. 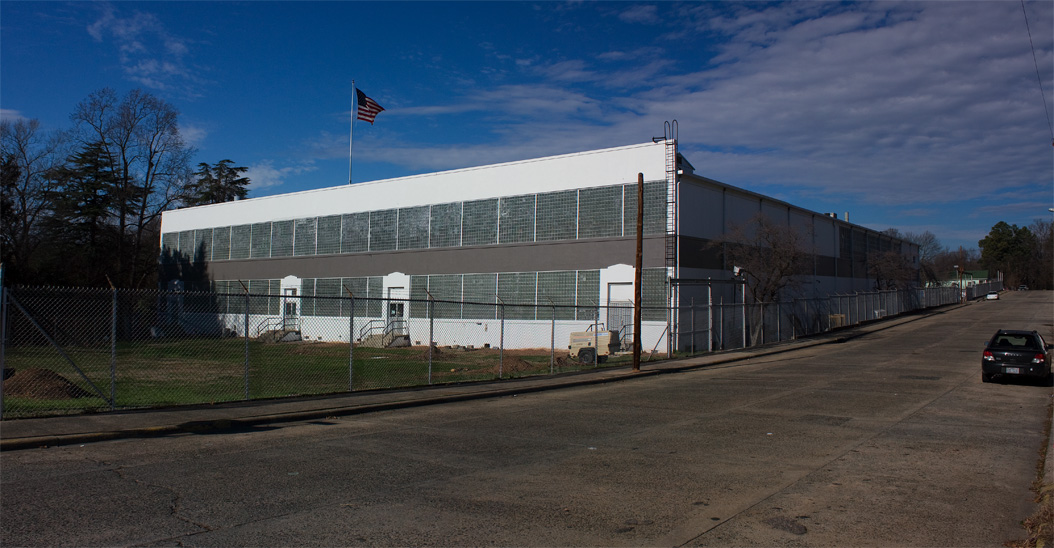 Looking northwest from Calvin and Holloway at the front of the 1940s structure, 01.11.09. Some very large Magnolia trees that once graced the front of the building have been removed recently.

Looking northwest from Calvin St. at the former location of the older, Yarbrough Mills building.

This location is a vast improvement over the previous location, a sorry shopping center on Holloway St., east of 70. It may have provided office space, but did not contribute to a sense of community commitment to the inner neighborhoods of Edgemont/Cleveland-Holloway, and East Durham. The proximity to Housing Authority, City, and private investments - as well as adjacency to Long Meadow Park - is a strong positive move by the city and the police department.

I have to say I think the man

I have to say I think the man that owns the building has done ALOT of improvement on the once delapadated building...he also has improved that community by allowing the Police substation to be there...I have noticed in the last couple of months ....a HUGE improvement in the neighborhood ie: the prostitution that was once there is NO longer there as well as the DRUG houses...I believe that the owner should get a round of applause!!

I am the owner of the former

I am the owner of the former Wright's Machinery Building located at 921 Holloway Street in Durham, NC. My father, William W. Yarboro worked at the plant for over 30 years. He died in 1989. I purchased the building in 2002 to preserve and protect the legacy of thousands of men and women who worked there. These people made such a tremendous contribution to Durham, our beloved country during the dark days of WWII, and later in early days of NASA and space exploration. I have started a museum inside the building and would love to show this to visitors. My company's corporate offices are located in the building. I feel very blessed and honored to work in the same building that was such a big part of my father's life. I love it when former employees stop by and relive their years and experiences of the plant. Please feel free to drop by for my history lesson about the plant, or the see the museum.

Today, with recommendation from the staff of the NC State Historic Preservation Office, the North Carolina National Register Advisory Committee voted to approve the nomination of Wright's Automatic Machinery Company to the National Register of Historic Places.

While it will take several weeks for the National Park Service to render their ultimate decision, nearly all nominations forwarded to the NPS by the state HPO are approved by that federal agency.

This property will likely soon be eligible under the historic rehabilitation tax credit program, enabling the owners to continue their work of preservation and renovation.

That is WONDERFUL news....Im sure the owner will be delighted...HOW AWESOME!!!

My deceased brother, Sergeant Johnny Williams, Jr. worked for Wright Machinery back in the 70's. Fine young man. Remember Him?

My sister, Helen, worked at

My sister, Helen, worked at Wright Machinery during WW2. It was rumored that they were building components for Norden bombsights.
We lived on N. Mangum St. about half-way between Fuller School and Little Five Points when our Dad was City Editor of the Durham Morning Herald
and also broadcast news and sports events on WDNC. We little kids helped the war effort as "Junior Commandos", pulling our red "Radio Flyer" wagon
around the block, collecting tin cans, scrap metal, string, cloth rags.....anything that could be converted into war material. I'm now 77 and still remember
those times and how our country all came together to win the war.

My Dad (Bill Shepherd) worked at Wright Machinery for decades (late 1940s to 1982/83) and retired from Wright's.  He loved that company.  He had friends he worked with, some who got together in the 1950s and created a recreation association at Kerr Lake for employees.  This association changed and evolved into a private Boat Club;  many first members being employed by Wright Machinery.