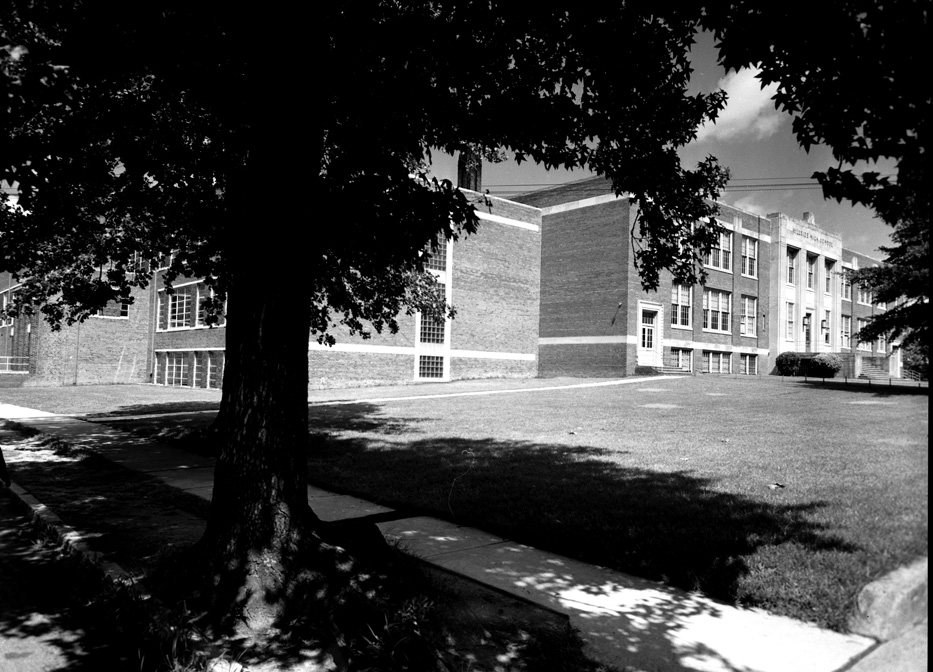 Originally built as the J.A. Whitted Elementary School in 1935, the school building located between East Lawson, Formosa, and Concord Sts. became Hillside High School around 1949, when the school board had Hillside and Whitted switch buildings to facilitate expansion. The original structure, with its impressive two-story entryway, was designed by George Watts Carr, Sr. Around the time that the school became Hillside, wings were added to either end of the original structure; these included an auditorium, cafeteria, autoshop, classrooms and a gymnasium. 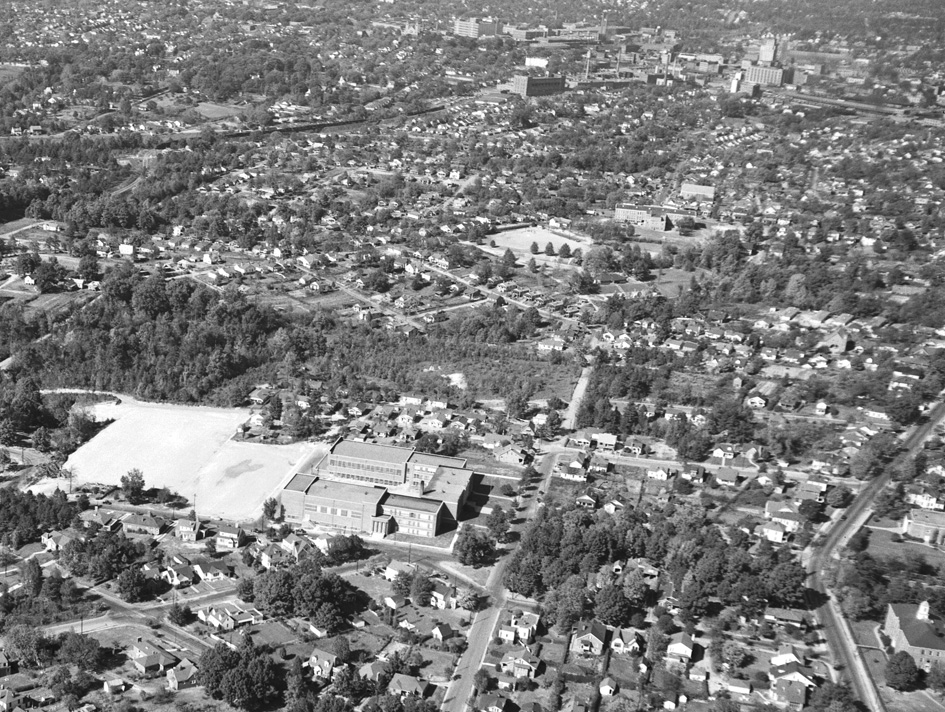 An aerial of Hillside, Looking northwest, ~1950. The original Hillside Park High School is visible in the background.
(Courtesy The Herald-Sun Newspaper) 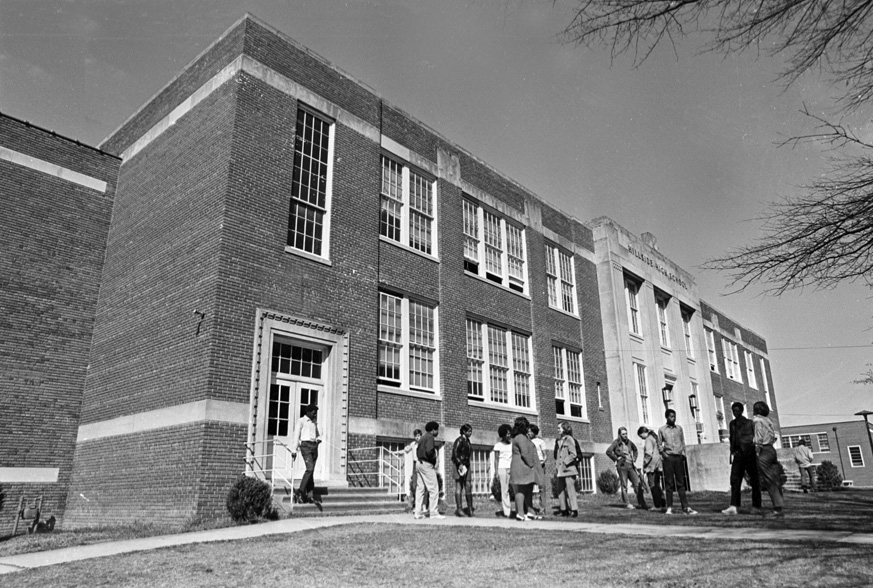 Originally a segregated structure, several generations of African-Americans growing up in Durham graduated from Hillside. Although there is a reasonable amount written about the integration of the formerly white schools in Durham, such as Durham High School, there is little reference to when white students began to attend the formerly African-American schools. I suspect that de facto segregation remained the norm.

Hillside moved to a new complex further south on Fayetteville St. in 1995. I believe that the original school building was empty after that for ~8 years. 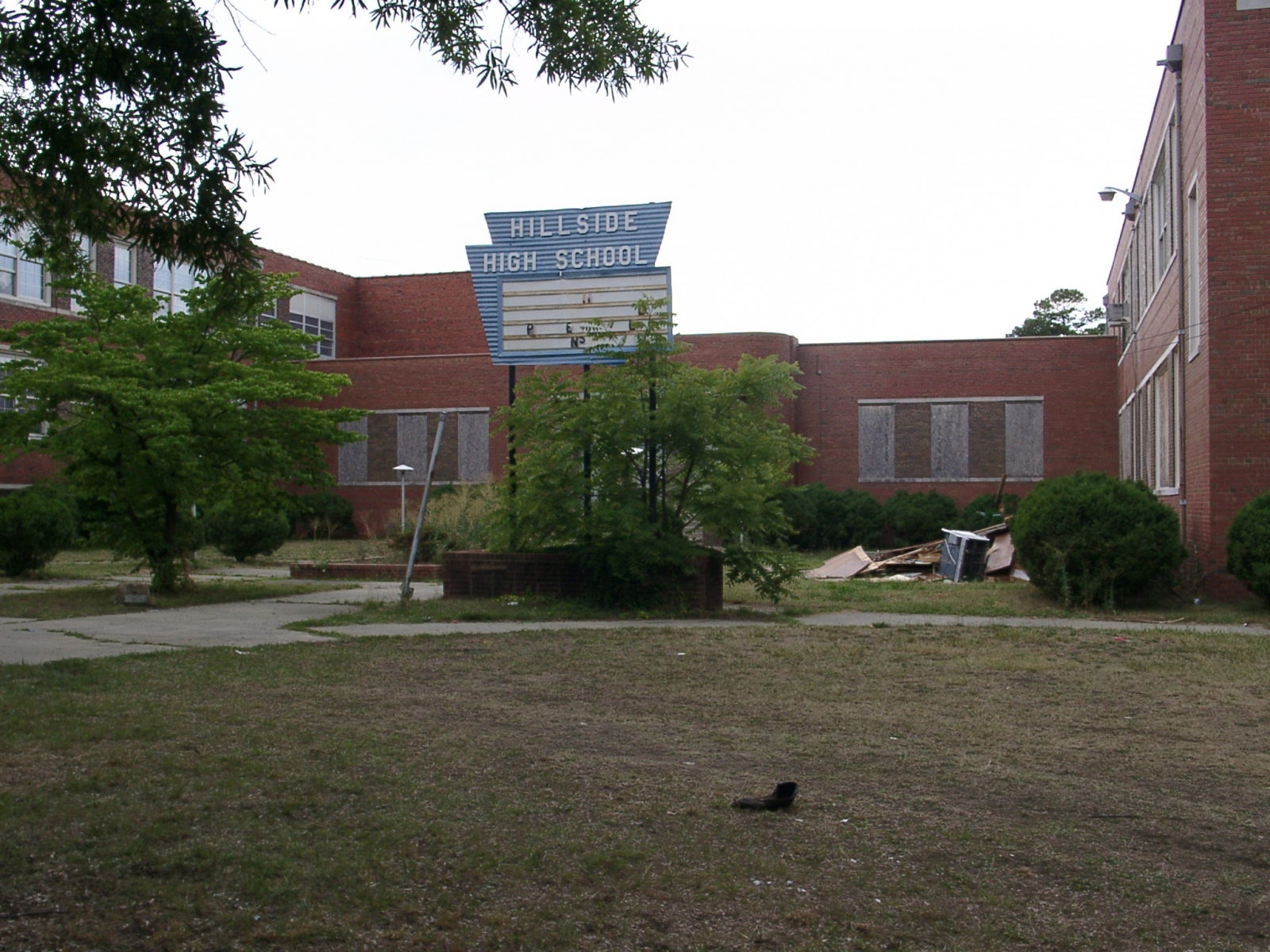 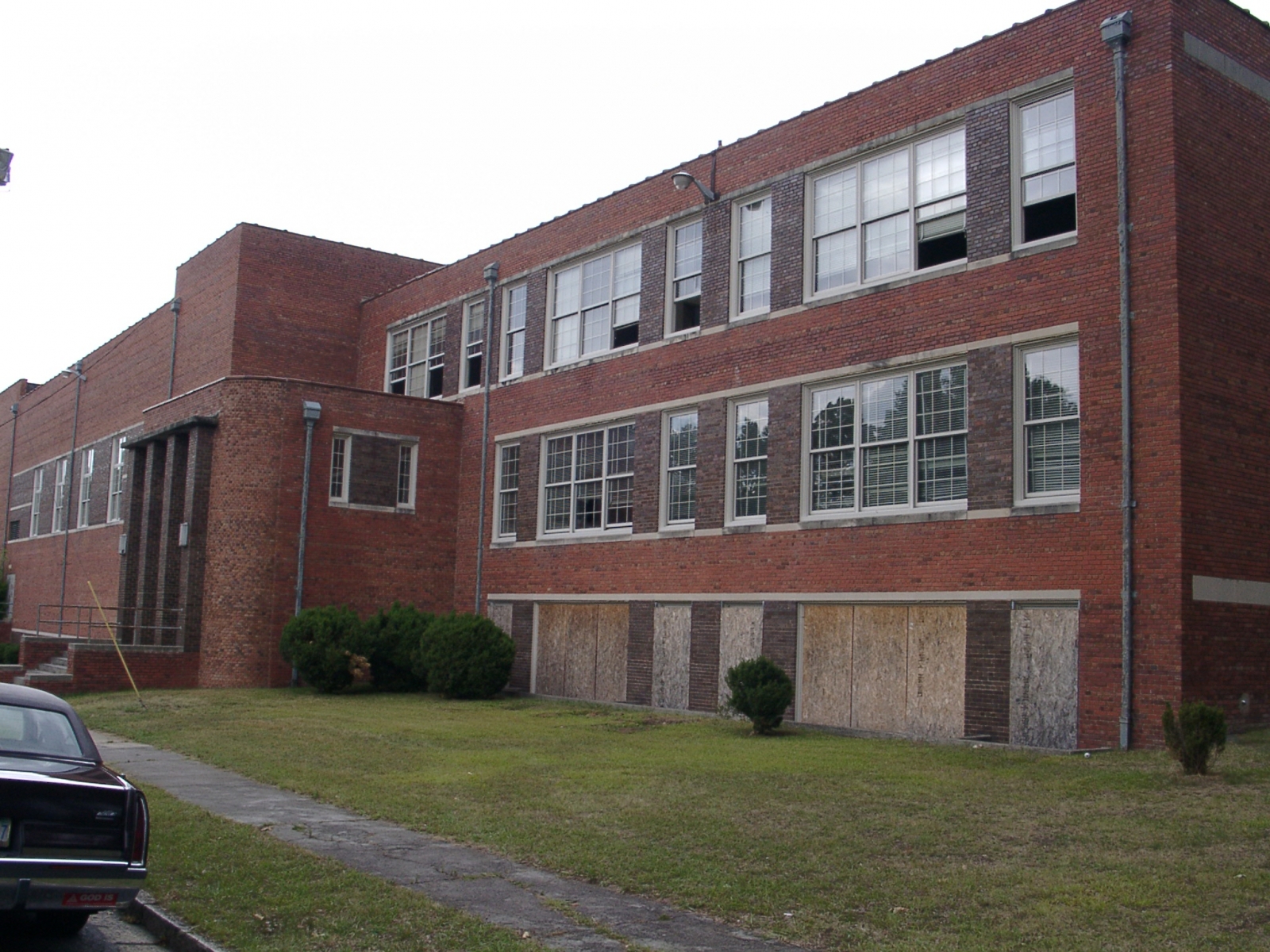 By 2003, North Carolina Central University had acquired the site, along with two blocks of historic residential structures immediately to the east of the high school. The school demolished these structures for expansion of the university - they would not be persuaded to renovate the buildings for university use. 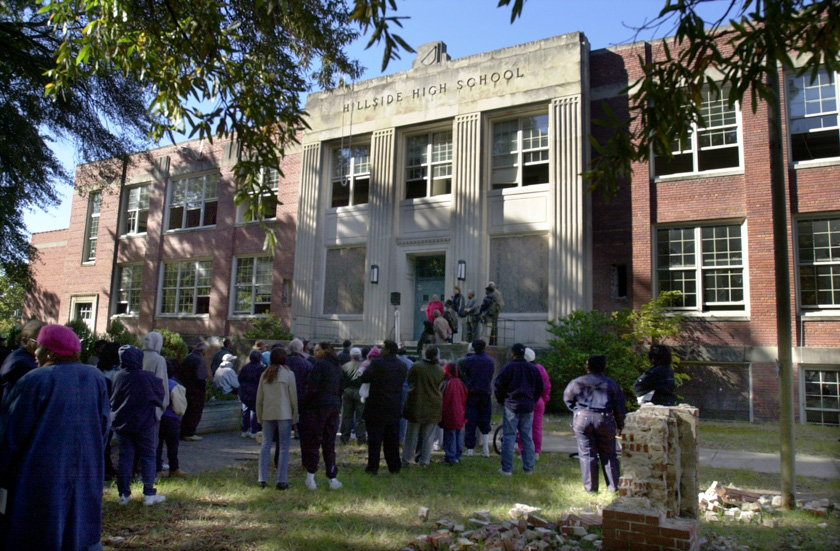 A farewell to Hillside, 2003.
(Courtesy The Herald-Sun Newspaper) 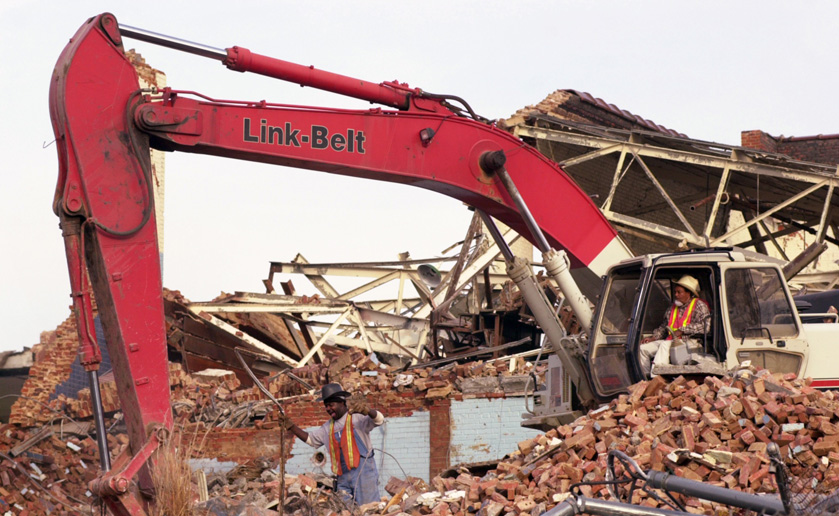 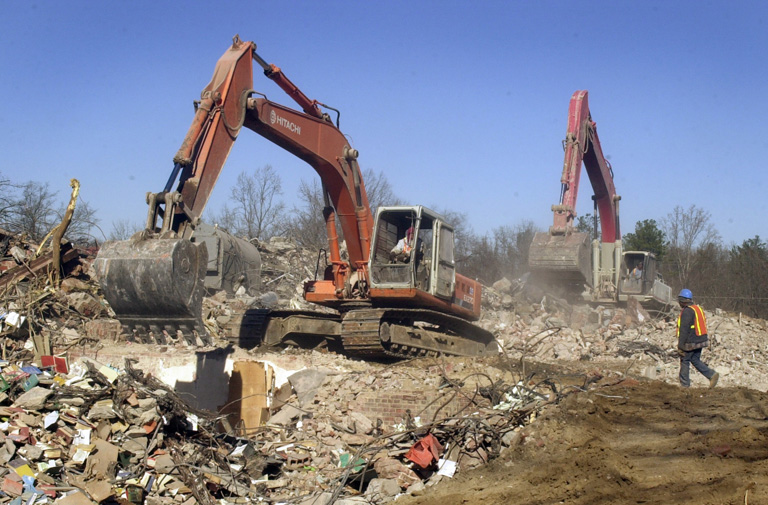 The 2002 photo of this building (facing the Formosa Avenue entrance) was the subject of a What's It Wednesday?! post on Open Durham's social media accounts (Facebook and Instagram), the week of May 15, 2019.  Follow us and stay tuned for more finds!

Dang... I didn't know that the current Hillside isn't the original Hillside; what a loss!

MLK spoke at Hillside in October 1956. And, the "Durham Public Schools" page on Wikipedia has a pretty good desegregation timeline.

Interestingly, it looks like I can make out at least three white students in the 70's era shot.

I wonder what shape these

I wonder what shape these buildings were in by the time NCCU expanded. Was in financially feasible for Central to renovate? Or did they just want bright and shiny as opposed to going to the trouble of retrofitting?

(I realize finances aren't the only reason to renovate, but it's obviously often hard to convince the entity paying the tab of that.)

White students began attending Hillside in the fall of 1970. I spent my sophomore year @ Durham High School but attended Hillside my junior & senior years, graduating in 1972 -- the second integrated class to do so. I will add that it wasn't very integrated. As I remember,the student body was 85 % black, 15 % white.
I remember the building fondly -- even moreso because I returned in 1976 to teach English there for 2 years. Of course, I regret that it was razed.
Although your post doesn't concern two other schools I attended, but I am wondering about Holloway St. School and Holton Middle School. Anyone know the plans for those two buildings? Ah, progress!? Not!!!

I attended Hillside for 10th,

I attended Hillside for 10th, 11th, and 12th grade. I was part of a group of white students who were bussed in from Duke Forest. Our parents were professors, administrators, and physicians at Duke who understood the importance of supporting the formal integration of the Durham School system. HHS was 90% black and 10% white. Hardly a day goes by that I don't remember the experience at Hillside and at Rogers-Herr. In 1971, court ordered desegregation changed Rogers-Herr from a predominantly middle to upper class white school with a sprinkling of blacks to a predominantly black and poor school with a sprinkling of whites. My family and many others became very involved in organizations to help support the schools. No one really knew what to expect. Teachers and administrators were abysmally prepared to handle the changes. My first day of school I was physically accosted by a student who stuck his hand under my skirt and pulled at my underwear and groped me. The principal was a few yards ahead of us and I ran up to him and told him what had just happened and pointed out the boy. Mr. Freeman, our principal, responded, "What do YOU want ME to do about it?" That just about summed up the support that I suspect anyone ever received at Rogers-Herr. It was nuts. Students were getting into fights over nothing. Kids brought weapons to school. Students would have sex in the library. Once when I was walking up the stairs in the stairwell, I ran into the shop teacher who wouldn't let me pass. I said, "Excuse me, please." He laughed at me and said "Make me." We sort of stared at each other for a period that seemed for ever to me, until he finally let me pass.
One day during recess, a girl stabbed me in the rear with a dart. I didn't even know the girl but she and her friends all had a great laugh over my surprise.
Hillside was different. The instability with middle schoolers was replaced with a basic indifference to the "white presence". By high school, whites were tolerated but mostly ignored. I remember praying every night that tomorrow I would go to school and be seen as "my name" and not "white girl". There were some blacks who didn't care that they might be ridiculed or ostracized by befriending a white but most didn't want the hassle or just weren't interested. I am sure those blacks who had attended predominantly white schools prior to 1971 had experienced something similar to what whites were experiencing at HHS. It was a painfully invaluable lesson.
After HHS, I went to college in MA, where I was thrust into another new environment full of proud ethnic groups I had not been exposed to in the South. When I was growing up, the South seemed to be defined by the color of our skin; you were black or you were white. In the North, it was "kiss me, I'm Irish", or "I'm Italian, Polish, Catholic, Chinese, Indian, Buddhist, Jewish, Gay, Bi, etc..." It was a relief to have some relief from thinking about race every day!

Interesting account. My experience was very different. I was one of the white students moved to Braggtown Elementary in 1971. I don't recall any of the kinds of things the previous poster encountered taking place at Braggtown or later at Chewning Jr. High. My black teachers were supportive and helpful. The black students did no more of the usual "hazing" of us that any new student gets.

I do remember hearing accounts of the fights based on race in the city schools, especially RH and Hillside. My friends (which included as many blacks as white) and I would talk about sometimes, wondering how it could be so different from school to school.

Good post! There are lots of native Durhamites who didn't know that Hillside and Whitted had switched places. They've been hard to convince but now you've provided proof -- hah!

By the way, I've got some super-poignant photos of Hillside in various stages of demolition (I was living at 404 Brant St at the time). Let me know if you'd like to see them.

Video of the interior of the

Video of the interior of the Whitted School in its current vacant state:
http://www.youtube.com/watch?v=ryh7DGhjs-k
The county sent this video out to contractors pricing the abatement and stabilization of the building. No renovation work is being done though.

I attended old Hillside for

I attended old Hillside for my 9th through my 12th grade year in 1991-1995. I have had so many fond memories in that old building lots of joy, fun, and pride I was on the JV and Varsity Basketball team, I was on the yearbook comittee,and I played the Trombone in the High School Marching Band.