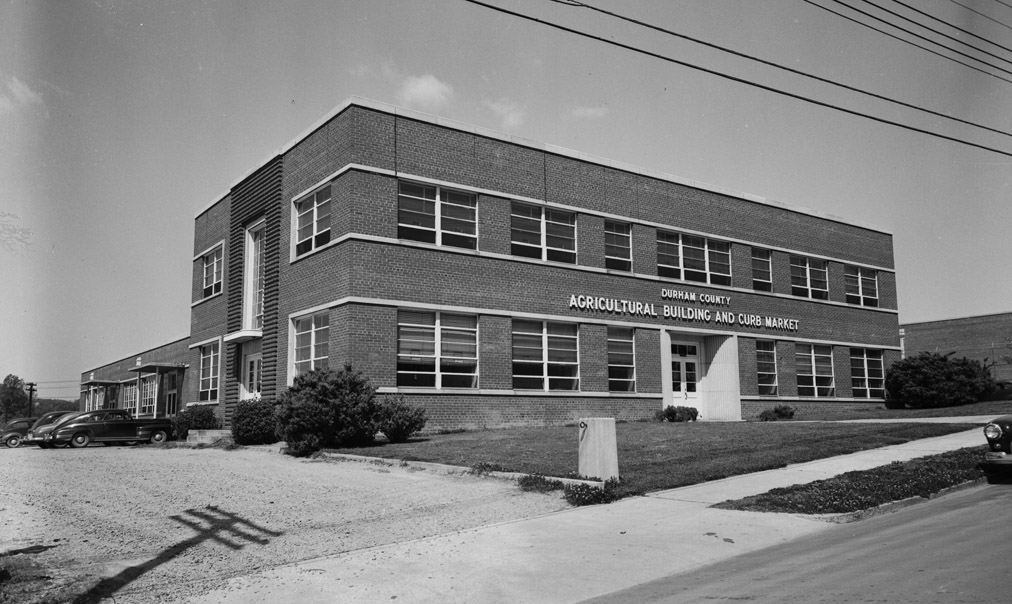 As detailed in the post about the John O'Daniel Hosiery Mill and later Farmers' Exchange, home demonstration agents (extension agents) and the Durham Women's Advisory Board established a 'curb market' at the Farmers' Exchange building on Gilbert St. in the 1930s. This was essentially what we think of as the 'Farmers' Market' today - a place for direct-to-customer sales of local produce.

In 1948, the Durham County Agricultural extension building was constructed on Foster St.; it provided large new facilities for the curb market, which took up (seemingly) the entire rear wing of the building. 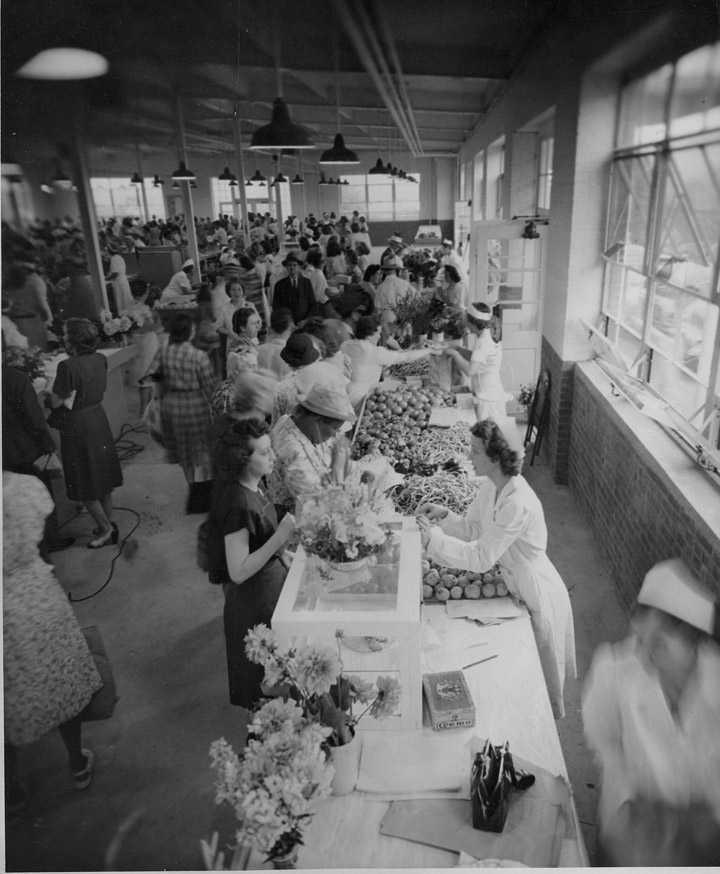 There seems to be little written information about the curb market - how often it was held, what kind of produce was available, etc. But Eleanor Cox was kind enough to send me her memories of the building and market.

"My mother's best two friends worked in the Agrigcultural Building (one was the Home Economics agent and the other was her secretary). She used to work there a few weeks each summer to cover some vacations. I would go some days with her and help operate the Addressograph! They had a regular mailing list that newsletters went to. The 4-H clubs met there also. Although we lived in the city, Mama grew up in Orange County on a turkey farm. She decided to petition for a city 4-H club and a group of us and the neighbors managed to pull it off for several years. I guess that old building became our 'home away from home'!"

"Every Friday was curb market day and my uncle had a produce booth, while my mother operated the cashier booth so the vendors could have plenty of change for transactions. I bought boxes of paper sacks from Brame Specialty Company and bundled them and sold them to the vendors if they ran out. Most times I'd profit a little bit of change, but I was only about 10 years old and here I was owning my own business!"

"My mother was a fantastic cook, and she canned and froze many things as well, but we always came back with a carload of goodies, since she worked several part-time jobs so she would always be home when we got home from school. I still have some of the recipes we received from those vendors. My uncle (that's him in the background of one of your photos) also took orders at Thanksgiving and Christmas for fresh turkeys, which very few grocery stores carried, except for Fowler's Gourmet. Since the market was only held on Fridays, we delivered the turkeys (mostly in Hope Valley) and collected his money for him. He was later the first to operate several produce stands in Durham, including the one at the Chapel HIll Road "Cow Store", which now has become a Mexican tienda, with lots of produce."

The curb market continued into the mid-1960s. 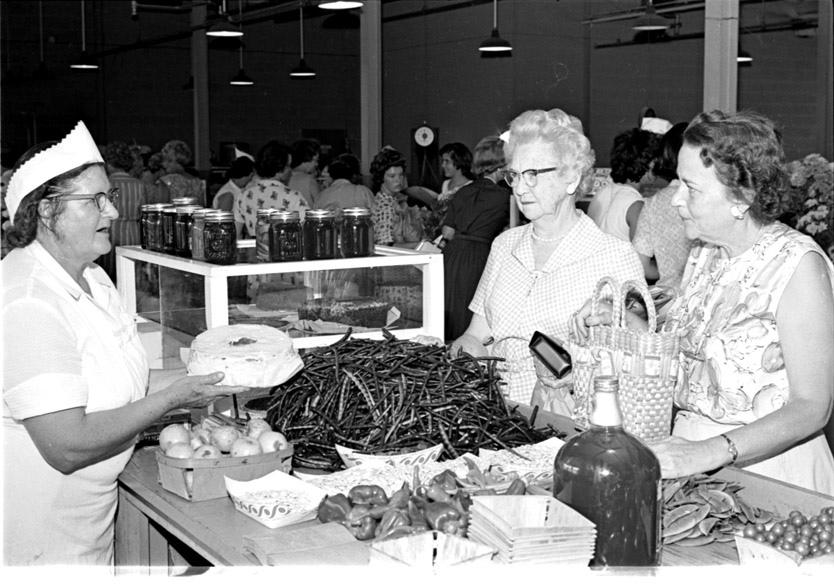 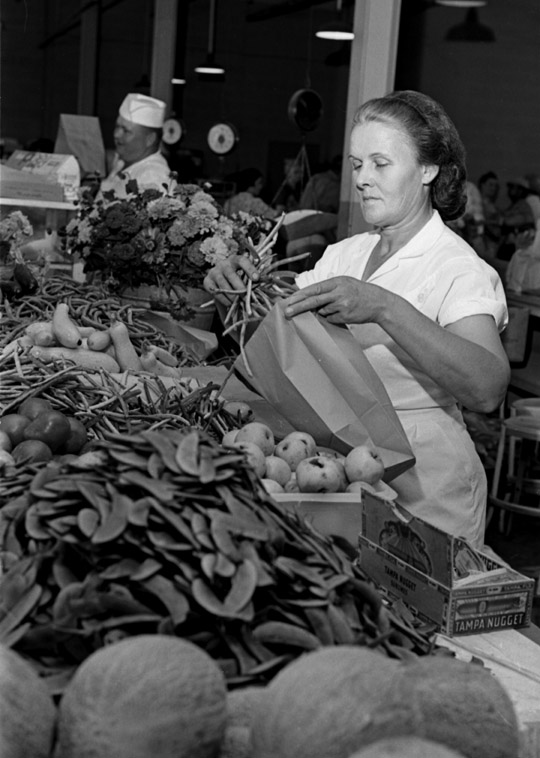 I'm not sure when the market ceased operating - I'd have to guess that the 1960s and supermarkets hastened its demise.

But it was long enough ago that it was unmentioned in the years leading up to the (re-)establishment of the Durham Farmers' Market. When I re-arrived in Durham in 1997, I had to trek over to Carrboro to hit the Farmers' Market. For some reason, the conventional wisdom seemed to be that Durham couldn't support such a market. The next year, a (very) few intrepid farmers set up in the DAP parking lot. It wasn't much.

But it simply exploded in the following years, and seems enormously successful - again. Perhaps, given supermarkets filled with Salmonella-suffused tomatoes, it's time for the Farmers' market to reciprocate, and make the supermarkets increasingly irrelevant. One can dream, anyway. 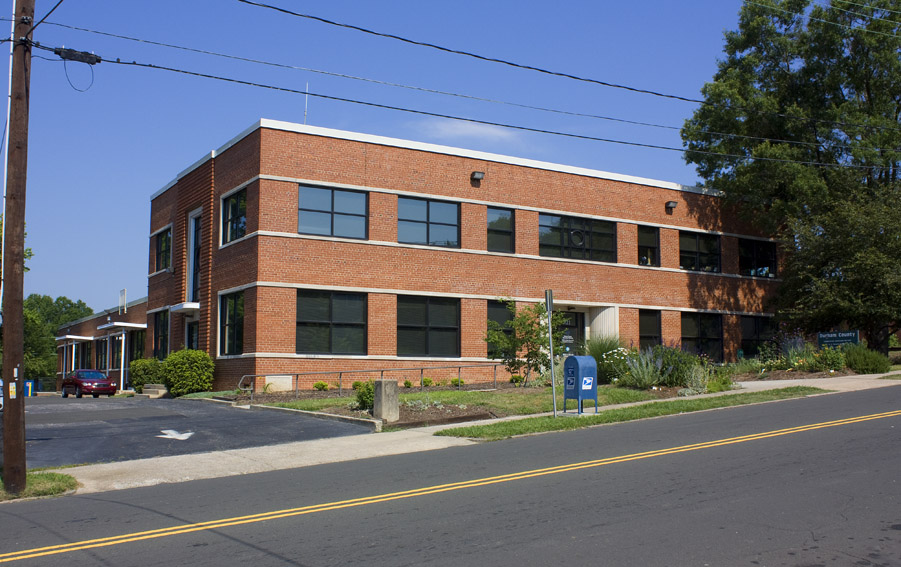 The building retains much of its original architectural appearance, with walls of one-to-five common-bond red brick veneer and windows set in concrete string courses at the top and bottom. The main two-story block is seven bays wide and three bays deep. The central bay of the façade features a double-door with rounded reveals of ribbed concrete, a Moderne decorative feature. The central entrances on the side elevations also have a decorative Moderne treatment, a wide quoined brick surround that extends to the roof, enclosing a tall window atop the entrance. Each of these side entrances has an original flat metal awning supported by posts.

A 2004 rehabilitation reworked the entire building, replacing all visible interior fabric with the exception of the two stairways, which have handsome metal stair railings. The open rear market space was subdivided into offices. In addition to Extension offices, other tenants are the N.C. Forestry Service and the Soil and Water Conservation Service. The only alterations to the building's exterior were the replacement of the windows and doors. The original paired metal awning windows were replaced with fixed-pane windows set in black metal frames. The larger windows above the three main block entrances were replaced with the same types of black metal frames with a central circular motif. The main entrance and rear entrance doors are replacements. The four sets of double-doors along the side elevations of the rear wing have been replaced with windows. However, the flat metal awnings that sheltered these original doors are still in place.
At the front corners of the driveway on each side of the building are pairs of original large concrete gateposts with iron rings so that the driveway can be chained off.

i wonder if the curb market

i wonder if the curb market was somewhat more affordable, or at least a bit less elitist than the current incarnation...

i love the ladies in white! lol

AnonI'm curious how you would

I'm curious how you would make the current incarnation less elitist.

This is fascinating. Thanks

This is fascinating. Thanks for the post. I did a quick check of Clio, an electronic database of history articles, and found one article on curb markets. It appears in a 2006 issue of Perspectives in Vernacular Architecture.

Its really a catch 22, isnt

Its really a catch 22, isnt it? Make the produce affordable enough for the general public, and the growers get shafted. I understand this. so the short answer is, i have so solution.

i think i found it infinitely more elitist when the line was officially drawn in the sand. It was all well and good, and a great sentiment to get the DFM, and the other triangle markets on the Food Stamps system...

But let's be honest, if you have $30 in food stamps to spend on just produce, eggs and meat for the month...do you really think you're going to spend it at the farmer's market, where it is entirely possible to walk out of there with 3 tomatoes for nearly $20. It's generally too expensive for me.

sorry, that just made the class division really stark for me. But that's just my opinion.

If nothing else, the market Benefits the farmers, a vastly under-appreciated section of our economy, and i appreciate it. But it doesnt serve Durham as a whole by excluding the majority of the local population.

well... if you don't think it's important to buy local, healthy, non-GM/GMO or e Coli or Salmonella or MRSA-tainted vegeatables or meat, supermarkets are the way to go. Spending a bit more money for untainted food that won't put me into the hospital and supports local farmers is well worth it.

Anyway, UNC has a few oral histories (perhaps more, but two that I know of) that talk about selling produce in Durham in the early-to-mid 20th century:

ah, the point is completely

taking care of one's own body...

and there's taking care of the poorer of our city...

sorry, but they are all important to me...It's not always about me or my health, most times it should be about the other guy, and moreover, the little guy...

sorry gary, i know this blog isnt a platform for this stuff, so i'll leave it be

It's definitely in the realm of the kind of discussion I like to see happen here, so thank you, and no worries.

Maybe I'm not so good at

Maybe I'm not so good at math, but I always thought I was paying less at the Farmers' Market than I did at the supermarket for most fruits and vegetable. Perhaps it is because I usually shop at Harris Teeter.

I think when the farmer's

I think when the farmer's market was originally getting going, someone approached the Ag folks about using it, perhaps for winter markets. The Ag folks, I believe, seemed to think they were insane. Which is really sad. I think a lot of the space may be subdivided now, but I think that may be a recent thing.

In any case, yes, if you go for the fanciest heirloom tomatoes, you can really run up the bill, but you can also walk out of there with a large bag full of produce for $10-$15 if you shop right, and focus on things like cabbage, collards, lettuces, squash, corn, peas, beans, and the cheaper meat cuts the vendors are selling, and stay away from the prime rib, arugula, blackberries, and Dolly Mama chocolate. No joke -- a friend an I were comparing prices on lard the other day, and it was pretty even, with Brinkley Farms beating out Compare Foods narrowly, I think.

My PoorDar is fresh out of order, but I see a lot of people at the farmer's market who aren't just the usual Trinity Park cogniscenti.

(Oh, and a part of me wants

(Oh, and a part of me wants to ask about what appears to be coconuts in the foreground of one of those shots, and inquire where one found coconuts in Mercia, etc...)

While I do frequent the

While I do frequent the farmer's market, I've found that I can get good deals on produce through Duke's mobile market and King's Red and White. Both places have beautiful local produce.

In the 60s - through early 70s, the ag extension offered quite a few summer programs for both kids and adults. I think they were through 4-H. I took guitar, knitting, crocheting, sewing, bowling and swimming archery through the program. The crafts classes were often held in that building. We'd sometimes go down to the corner after class for a hot dog and Pepsi.

Gary, my aunt says she thinks the markets were held until around 1965-66 best as she can remember.