1811
Palmer Street
Durham
NC
Year built
1913
Year(s) modified
1953
Architectural style
Colonial Revival
Construction type
Masonry
Brick
Neighborhood
Lakewood-Tuscaloosa
Use
Office
Church
Fraternal Organization
Building Type
Church
Can you help?
You don't need to know everything, but do you know the architect?
Log in or register and you can edit this. 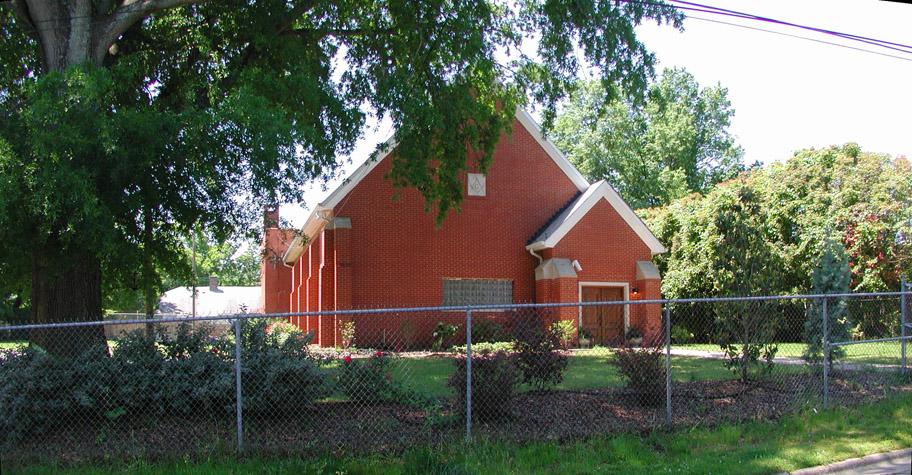 The Lakewood congregation traces its roots back to the fall of 1907, when an interdenominational Sunday School was first held at the Lakewood Park roller-skating rink by Reverends W. V. McRae and C. B. Culbreth. The Lakewood Church officially came into being in the summer of 1909, beginning with a founding congregation of less than 20 members, with T. M. Grant as the preacher. The church was 'officially' founded after a local successful revival conducted by Harry M. North (a teacher at Trinity Park School) occurred in early 1909. T. M. Grant was appointed the first pastor of LPMC. The church’s first building was apparently the "old Lakewood school building.”

Lakewood Methodist Church built a new structure at 2317 Chapel Hill Road in the early 1950s, and sold their original church building to the Durham (Masonic) Lodge Number 352 in 1953. The Masons had used various temporary quarters for their meetings after leaving the Eligibility Building in 1938.

Members soon began renovating the former church into a Masonic temple, removing the steeple, removing interior walls, removing the floor and joists (and installing a concrete pad, which lowered the floor by approximately a foot), and adding a second story and two-story flat-roofed addition to the rear. They also removed the original arched windows and installed small 1/1 sash windows and added a brick façade.

In September 2006, Legacy Research Associates (a cultural resources management firm) purchased the building and the adjoining structure at 1807 Palmer, to renovate for its offices; it is also the home to the ‘Lakewood History Center,’ a non-profit that deals with local history and preservation.

You got any pics of the original LMC, inside or out? I've never been inside, but the Masons did a great job a remuddling the outside. Sounds like they did a great job of the same on the inside...

Nice interview in the Indy! I just saw that.

No I don't - maybe some will come along eventually.

Is anybody out there a member of the "new" Lakewood Methodist? If so, they may have some old photographs...

I worked in the building about four years ago (for a cultural resource management firm); the company bought it from the Masons. The company has since closed down and the building is now again for sale.

When we first purchased the building, we tried contacting the "new" church for photos and information, but they never responded.

The interior had been greatly remuddled by the Masons in the 1950s, including adding a second floor, adding a few interior walls, adding plumbing and three bathrooms, removing the first floor's floor joists and pouring a concrete floor, adding a small two-story addition off the back, adding a brick veneer, cutting down the bell tower and removing two of its load-bearing walls (!).

I have some 1950s articles on the building's remuddling, but of course they're filed away somewhere!

Front and back of an old "Egg Shell" church plate.