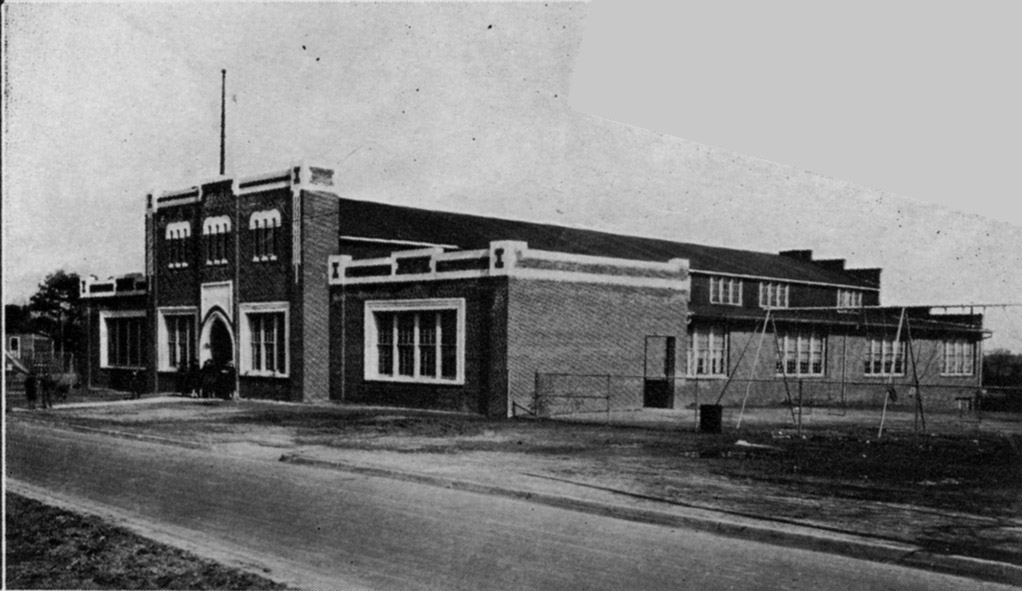 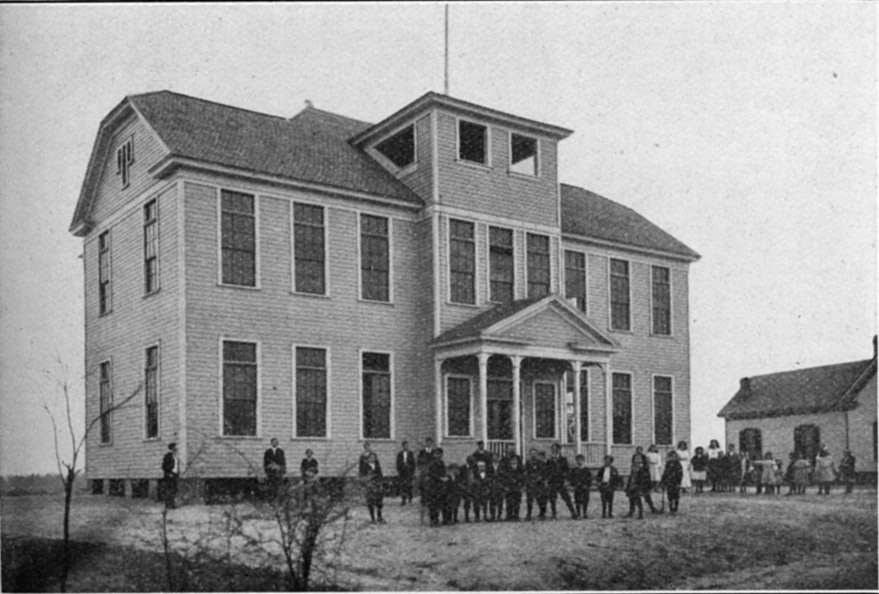 The original Lakewood School was likely built around 1910. There is some evidence that a school on the site may have been run as more of a country schoolhouse by JW Proctor and his wife Julia prior to the school becoming part of the county system ~1910. The similarity of the above school to other county schools at the time gives credence to the idea that the school was built around the time of induction as a county school.

The below photo was found by the homeowner at 2207 Chapel Hill Road - in his wall during renovations. The writing on the back indicates that the woman in the center is Julia Proctor; her husband is likely in the back row in front of the doors. 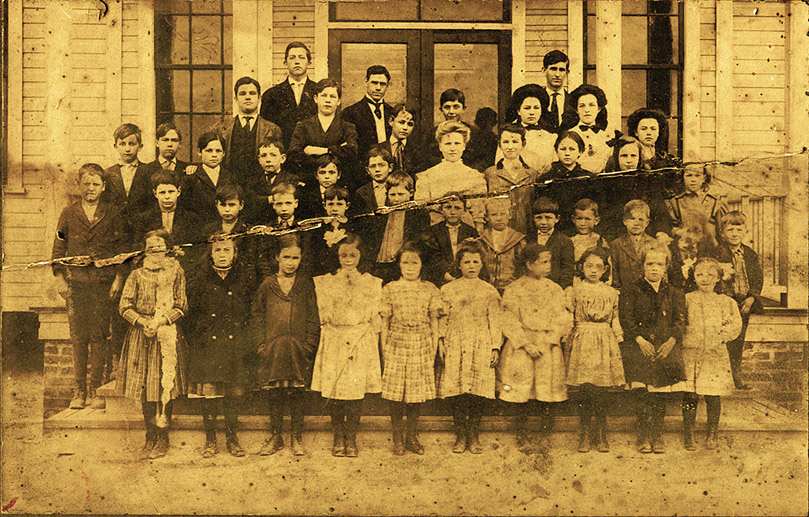 Between 1918 and 1922, the original school was demolished and replaced by a brick masonry structure - it remained a county school.

In 1925, though, Lakewood and other areas that we consider part of Durham's inner neighborhoods were annexed by the city. In 1927, the city wrote about the school:

"The school has 11 classrooms with 332 pupils in 10 grades. The Lakewood Park School in 1919 had an enrollment of only 196 pupils. Its growth has therefore been rapid. The school, although recently built, appears to have been cheaply constructed and is already giving evidence of wear. It is centrally located in a rapidly-growing residential district."

The new city planning commission, writing the above, was not a fan of the location either, finding it "objectionable on account of being on one of the principal thoroughfares."

Despite the sour tone of the city planners, the school continued to be a central focus of the community through the mid-20th century. As one resident told me last week - kids growing up in the community had their whole world within a few blocks. 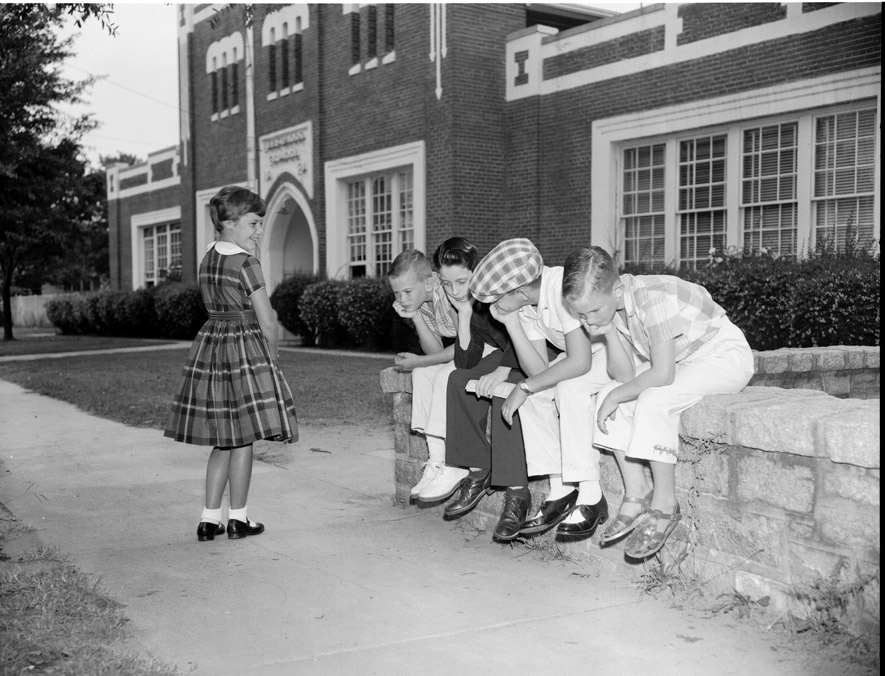 A posed shot for the opening of school, 09.05.56
(Courtesy The Herald-Sun Newspaper)

On March 2, 1960, a big snowstorm blanketed North Carolina, dumping 9 inches of snow on Durham. School was canceled on March 3rd, which was a very fortunate decision. Around 8:30 am, when kids would have been in the auditorium at Lakewood School (had school been in session) the roof collapsed under the weight of the snow.

Reports at the time noted that the school would likely have been "torn down anyway" due to recently passed bond money for school construction. The children were temporarily bused to EK Powe school for several years until the new Lakewood School was completed further to the southwest.

The old school sat empty for several years, and evidently was available for sale - attracting no buyers. In 1964, the school was torn down. 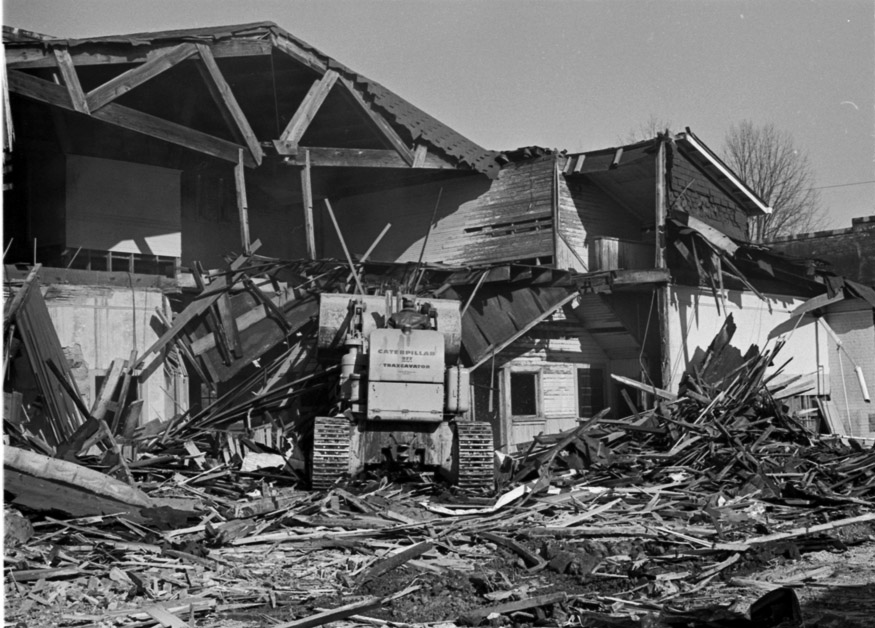 Demolition of the old school, 01.10.64
(Courtesy The Herald-Sun Newspaper) 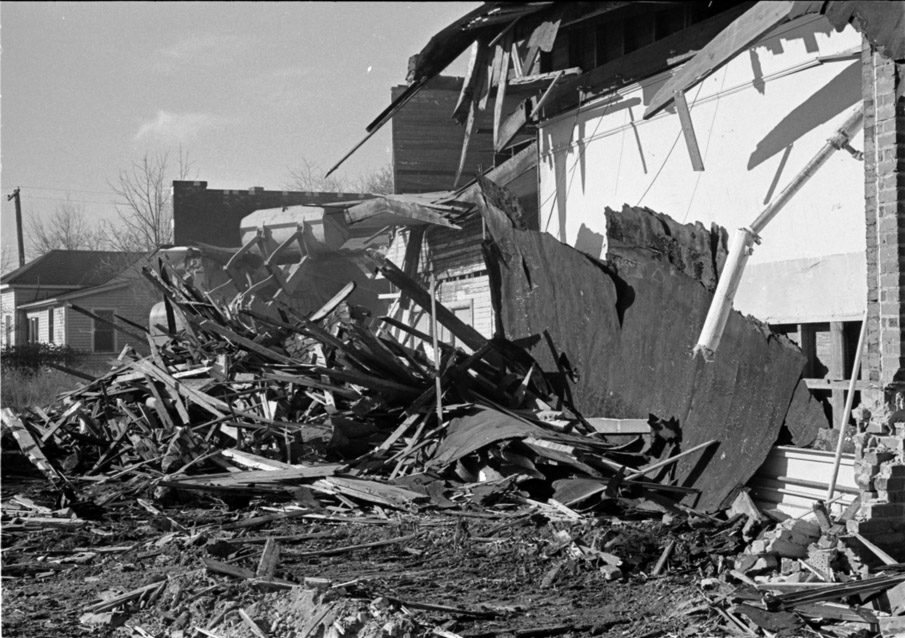 Demolition of the old school, 01.10.64
(Courtesy The Herald-Sun Newspaper)

In 1966, the Boys' Club of Durham built a new facility on the site. This remained a Boys Club until sometime in the early 1970s, when the YMCA purchased the building for a branch YMCA - complimenting the main Y on Trinity Avenue. After that YMCA closed, the Lakewood Y became for many years the only Y in Durham, until the downtown Y was built in 1997.

Thus ensued ongoing troubles for the Y in Durham, including the Lakewood Y. The troubled child that was the downtown Y seemed to absorb the attention (i.e. $) of the Durham Y organization, and anecdotally, the Lakewood Y suffered.

The consolidation of Triangle YMCAs seemed to spell some relief, bringing an infusion of cash into the Durham system. However, the Board soon decided that the Lakewood Y was superfluous.

Residents of Tuscaloosa-Lakewood felt differently, and advocated for the preservation of a central hub for the community. Led by Chuck Clifton, they formed the Committee to Save the Lakewood YMCA and made clear to the broader community, and the Triangle Y Board, what was at stake for the neighborhood.

And the explicit question in this argument was - what is the effect of a vacant building on our community? What else is this building useful for, and, should it be torn down, what gets built in its place?

I'll admit, I thought the residents had a very tough mountain to climb with this fight, but they prevailed - the county announced in April 2008 that they would purchase the building and 7.4 acre parcel and spend $8 million renovating the facility to house a Montessori middle school as well as the YMCA, bringing this site back to its historic use.

The Lakewood Y and Montessori School opened in a new facility on the same site in 2011.

Kudos to the YMCA

Kudos to the YMCA orgainizaiton for finding a way to continue to use this site. The easy route would have been to walk away. I understand that Y management and volunteers spent many hours formulating the new plan with the county. Now, let's encourage the county to consumate the deal. -Y member

The story of the Lakewood

The story of the Lakewood YMCA consistently makes me proud to live in Durham. Residents who stand up and work to save their neighborhoods are respected and sometimes come out with great results like this!

I vividly remember the snows

I vividly remember the snows of March 1960, as I was a senior at Durham High School at the time. As I recall, we had heavy snows each week for 3 weeks, and if memory serves me correctly, it was on 3 consecutive Thursdays. The city of Durham did its best to scrape all that snow and ice off the streets and took dumptruck loads full of it down to the parking lot of the Durham Bulls stadium (old). Snow was still melting in the parking lot on July 4th 1960.