1201
West Chapel Hill Street
Durham
NC
Cross Street
Kent Street
Year built
1966
Year demolished
2013
Neighborhood
West End
Use
Church
Laundry
Building Type
Commercial
Can you help?
You don't need to know everything, but do you know the architect?
Log in or register and you can edit this. 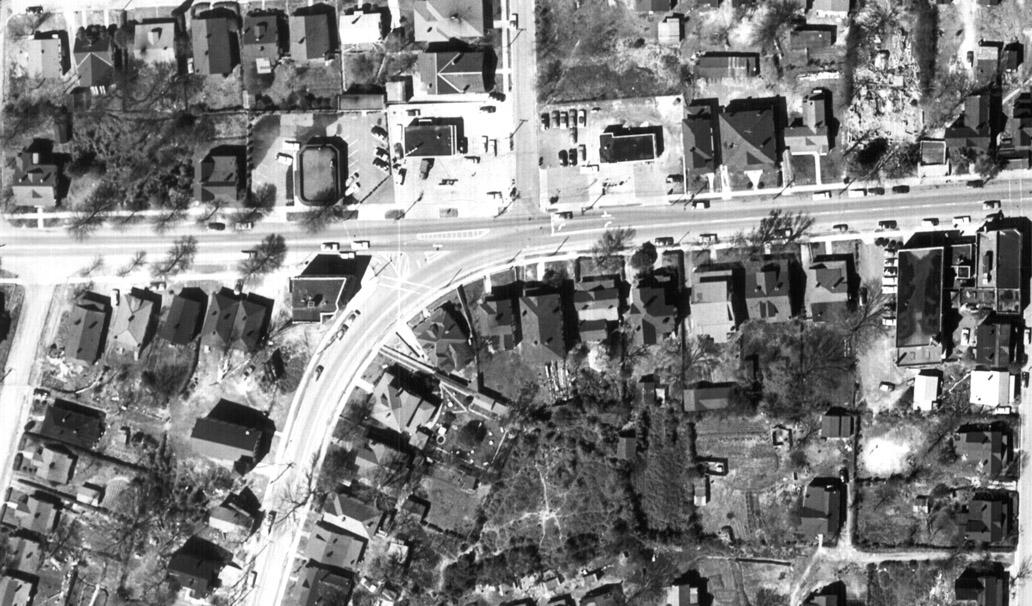 I have no street-level pictures of the houses arrayed along the arc of the former streetcar line, which turned southwest from West Chapel Hill St. at Kent St. to head towards Lakewood Park. However, you can get a sense of a residential transition area that is, at the time of this 1959 aerial, becoming more commercial.

The New Method Laundry, located at N. Roxboro and Holloway Sts. was demolished by urban renewal. They opened a new laundry (the New New Method?) on the southeast 'corner' of Kent and West Chapel Hill in 1966. 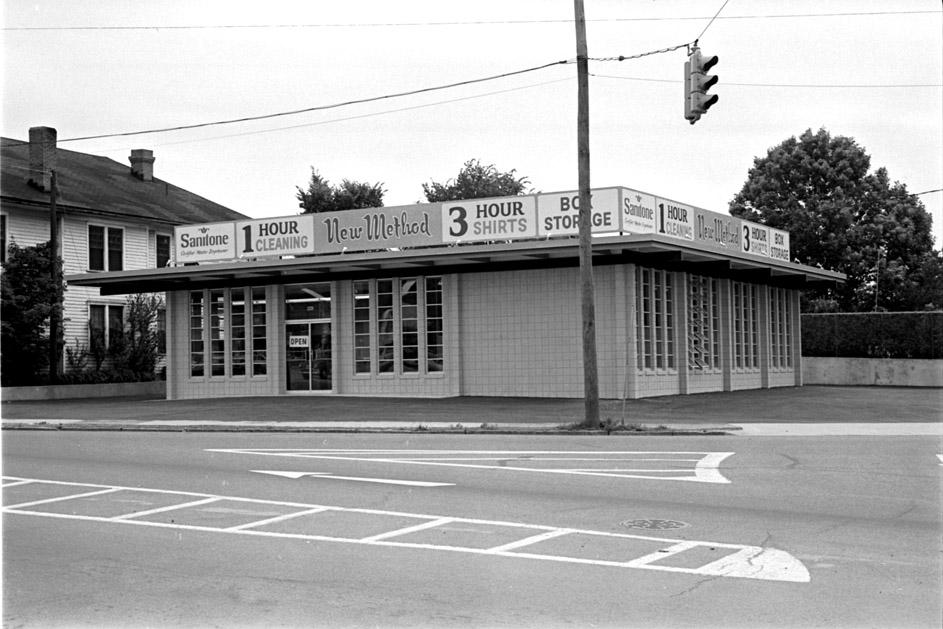 No clue how long they stayed in business here, but the West Chapel Hill St. business district was on a steep decline through the 1970s and 1980s, so my guess would be that it was a casualty of those times.

Now it's another storefront church, one of several along the West Chapel Hill St. frontage. 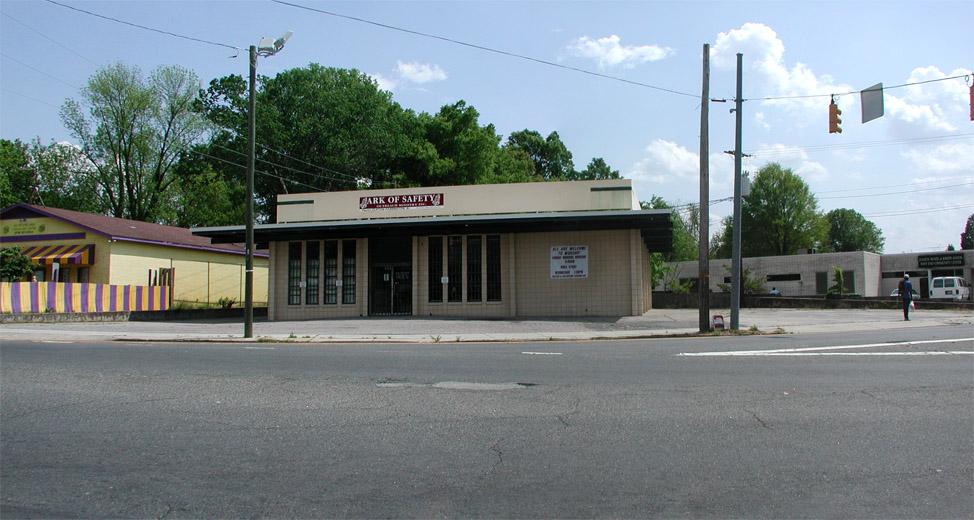 And that's unfortunate, because the residents of this neighborhood could use a laundry more than they could use yet another church in the span of these very few blocks. For all of Duke's attention to providing affordable housing in West End/Lyon Park, I wish they would do something of substance along the West Chapel Hill corridor, which could use some new commercial development in place of the Murder Mart et al. While the couple of blocks are a bit better than they were when I lived just off West Chapel Hill back in 1993, it isn't much of a change, given that 15 years have transpired.

Self-Help has a new development planned for the entire southeastern 'curve' of this intersection, which is slated to include a new food co-op called "Durham Central Market" as well as office space. 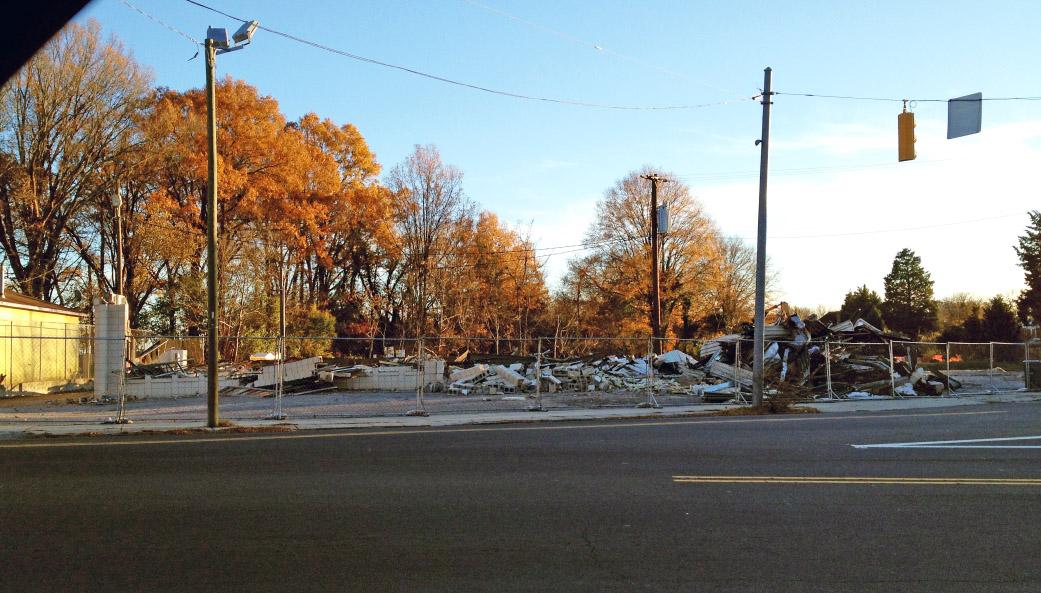 In the 80's this was a successful bike shop. CM

Yep, it was still a bike shop when I moved to Durham in 94.

Having stared at census maps of this area until my eyes bled for purposes of working with the Durham Food Co-op, I've been getting more and more pessimistic about this business strip. The old thinking was that the area was just too poor to support the co-op. There may be some truth in that, but it's not the real killer of businesses here.

The problem is that the freeway and urban renewal have utterly destroyed the residential base for this business district. Of the surrounding land area not put under asphalt by the bulldozers, a massive amount of it is taken up by the cemeteries and by the undeveloped forestland that surrounds Campus Drive. Very simply, there just aren't enough people around it to support a viable pedestrian-focused business district.

The only way this will ever change, I think, is with a freeway cap and a redevelopment of the area around the police station away from asphalt lakes.

And the Sturdivant Holiday Inn with all of its broken washing machines, cars, school buses, razor wire and chain link, doesn't exactly invite you to drive towards that area either..

While I agree that too many of them seems, for some reason or another, to stifle other businesses, i'm really kinda disturbed by the feeling that Churches have no place in a community? that somehow they are connected to blight? that the fact that this building is no longer abandoned, but occupied by a church is "unfortunate"

churches and places of worship are as integral a presence in an american community as schools, hospitals, buildings of law, and homes.

I guess i just sense that we take the separation of chuch and state to the level of hating churches at times. what we feel personally about organized religion, shouldnt bar the right of the average american citizen from worshipping.

or should that building just remain empty while someon hems and haws about whether to get the loan to start his or her business there?

just expressing something i've noticed in us as a progressive people...this feeling of wanting to stifle the long standing institutions, etc simply because they are religious, outmoded or outdated....much like old houses that some people see no more use for?

again, that's just me rambling at 8am

I think you've cast my opinion in rather stark terms, i.e. hating churches, barring the rights of Americans to worship, etc. Of course, I said and feel nothing of the sort. What is unfortunate is not this particular church in this particular building, or religious institutions in general (except for the thirst for surface parking, which I've written about many times before.) What's unfortunate is the density of churches in an area that could use more get-stuff-done services. It's a concern that I've heard echoed throughout a diverse cross-section of this community. You make a good point about occupation of this building by church vs. abandonment - I agree with you; I'd certainly rather see this building occupied by a church than abandoned. But I'd rather see a laundry than a ?sixth? church in two blocks. Most of these churches are shuttered or at least inactive except when services occur, which leaves them dark much of the time.

Essentially I view churches as one of an array of services that contribute to the lives of people in neighborhoods. I just don 't elevate them above and beyond the other services in the neighborhood. So I'd say similar things about 6 laundromats, 6 gas stations, 6 bike shops, etc.

I wasnt trying to single out your opinion, it just brought up a running thread of opinion i see throughout SO many progressive discourses throughout our community...

and you are completely right, they're no better than any other institution, and true also that too much of a thing...well, as the saying goes.

This area of Chapel Hill Street will never survive off of ped traffic alone, and IMO that would be true even if all of the "urban renewed" areas were still around and occupied - people just drive everywhere now.

That said, there are several businesses here that seem to be getting by: Absolute Auto, Ingold Tire, and that "car audio" place (at least I *think* that's legit) all come to mind. The Co-Op may still be around, but it's struggling (which I blame more on the Co-Op itself than the neighborhood). I believe there's a functional day care next to the building from today's article as well.

I don't really know what the solution for this area is. Businesses clearly *are* making this strip work, but not in large enough numbers for it to "turn the corner." I believe this area is slated for some sorely needed street scape improvement funds, but I wonder how much difference a nice sidewalk will really make when half of the buildings are dilapidated storefront churches.

Regarding those storefront churches - they really are a blight. Unlike "real" churches, they make very little effort to maintain the premises, and do nothing to feel welcoming. They're used what, 5 hours out of the week? Vacant most of the time, bars over the windows, surrounded by decay...

"real" church? what, do you think its a front or something? its a small church--they do what they can with what funding they have, doesnt make them "fake" if they dont have turrets or something.

I think the most ill-used section of that street--what keeps people from walking it, is that strip where the coop is. between the comings and goings of the taxi cab company, and the also boarded up Muslim establishment (I'm not exactly sure what it is) a person feels like there's nothing there for them...and on we drive.

Doesn't the "boarded up Muslim establishment" have something to do with the Shabazz Family?Some interesing history on that corner.

"real" church? what, do you think its a front or something? its a small church--they do what they can with what funding they have, doesnt make them "fake" if they dont have turrets or something.

One or all of these might be fronts for illegal activities. I don't know - but I do know that decay tends to foster crime, and most of these are rife with decay.

It's not the size of these churches that's the problem, it's the general degree of disrepair. The "Ark of Safety" here is actually in better shape than most on this strip.

From my perspective, if you're thinking of starting up your own church in a former gas station or laundromat, maybe you should ask yourself if you can at least make it welcoming and keep it maintained. If you can't do that, then maybe you're doing the community more harm than good.

With this block of Chapel Hill St. being the way it is, Food for Life Supreme is a welcome sight to see.

One cool thing about the area is the "recycled" granite curbing that is set back from the other granite curbing between the sidewalk and the buildins/parking lots/etc. ... perhaps it was salvaged from when the freeway blitzed through the area...