1011
East Main Street
Durham
NC
Year built
1900
Year(s) modified
1920-1930
Year demolished
1969
Construction type
Masonry
Neighborhood
Edgemont
Use
School
Building Type
School
Can you help?
You don't need to know everything, but do you know the architect?
Log in or register and you can edit this. 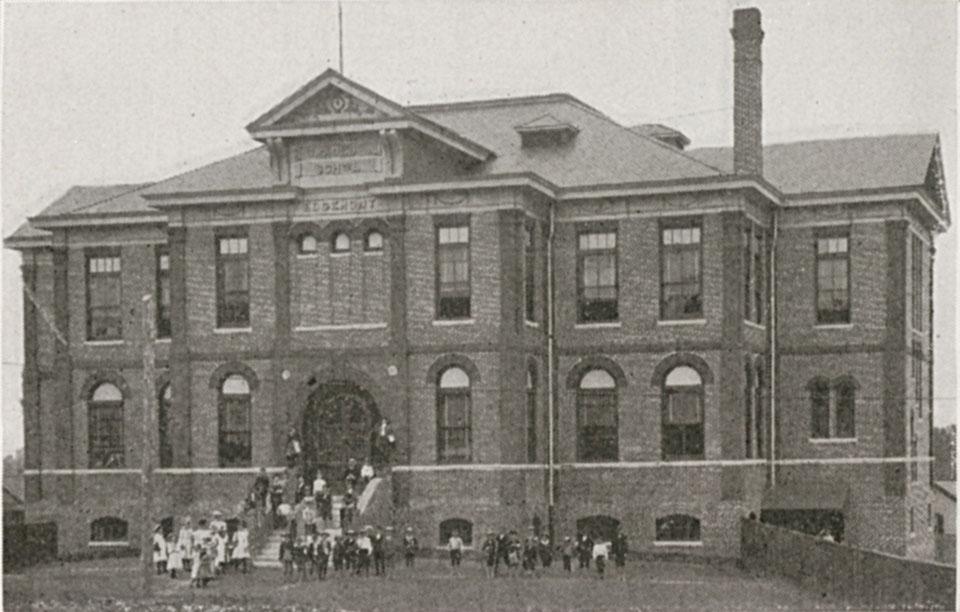 The initial school was expanded in the 1920s with two large wings (one on each end of the building) to accommodate more students.

Below, some film of the front of Edgemont School/kids and some views east on East Main St. towards Alston Ave. (from H. Lee Waters) 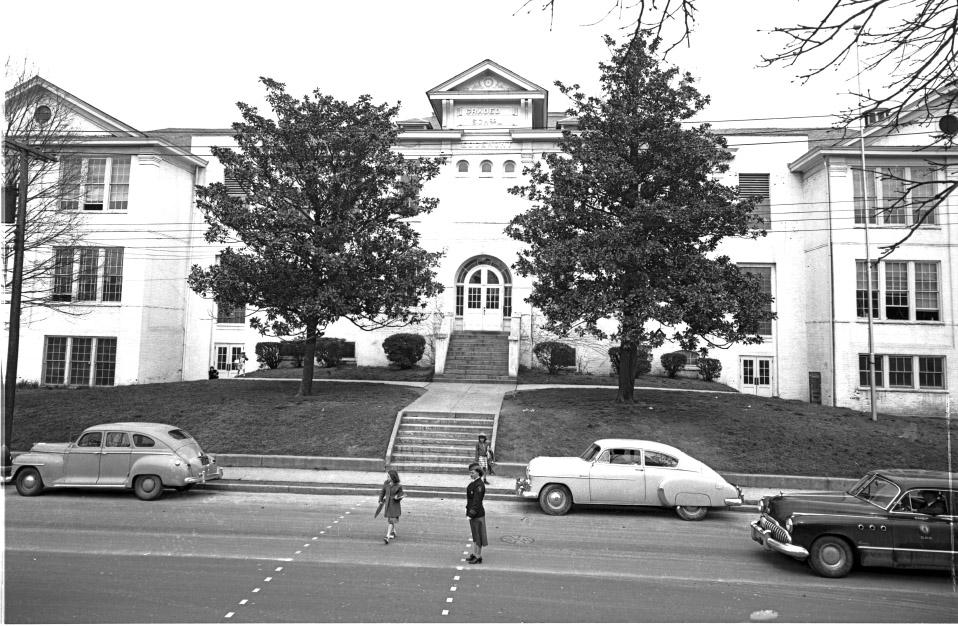 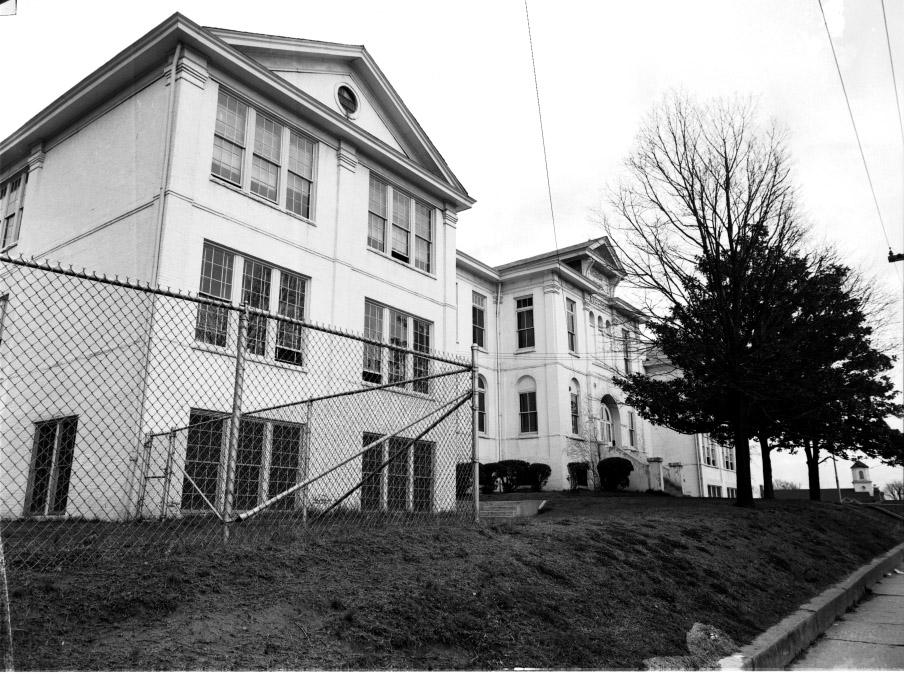 By the 1940s, Edgemont was in trouble; if I had to define a place where the decline of what we sloppily lump together as Northeast-Cental-Durham began, it would likely be in this community. You can find reports in the Durham County Library from the 1940s detailing "social ills" in the community and plans to establish the Edgemont Community Center as a place to occupy "idle children." Although I haven't seen it stated explicitly, I have to assume that this was due to the closure of the Durham Hosiery Mill No. 1 and, perhaps, the closure of the Commonwealth/Morven Cotton Mill just to the east of Edgemont - both by the 1930s.

Edgemont School from the north, looking south-southwest, ~1950. The Durham Hosiery Mill No. 1 and Golden Belt are on the right. The mill village of Morning Glory is in the foreground.
(Courtesy Herald Sun)

(Edit)
The Edgemont School burned in 1969 - I don't know whether it was completely destroyed, or whether damage was simply felt too significant to repair. 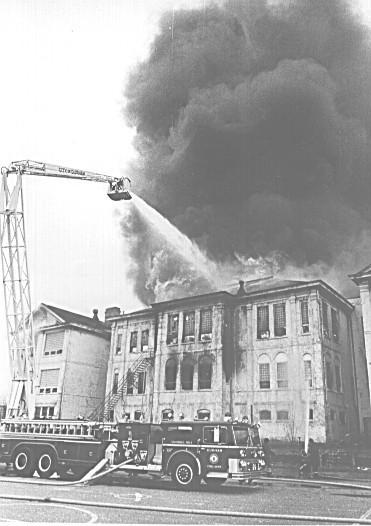 It is now a massive parking lot for the Refiners Fire Baptist Church next door.

Imagine that... it's now a parking lot for a church. I am so shocked that I think I may have to write Ripley's Believe it or Not.

all of these vanished structures, leaving the steps at the curb, such a waste, and this one is especially bad with the two trees still framing the steps, and of course the obligatory fence, a fence for a stinkin' parking lot. was the school torn down for the sole purpose of building the lot for the church?

Unfortunately churches don't make good neighbors most of the time. As it happens often, churches purchase surrounding residences, and create an asphalt jungle to meet their once a week, for a few hours, parking needs. I suspect this structure was already torn down, perhaps with Urban Renewal funds, and then made into a parking lot. It would be a considerable expense to take a large building like this down compared to a typical residential structure.

Agreed Myers - except that I do know that it was not taken down with Urban Renewal funds. The urban renewal project areas did not extend east of the Norfolk-Southern tracks/Elizabeth St. north of the Durham Freeway. It may have been taken down by local government, though.

Wow, our historic structures are not even safe from the wrath of GOD's followers. Who do we turn to next, Batman?

Anyway, I've tried to talk to Commissioner Gordon about it, but he thinks that knocking down buildings reduces crime. Dumbass. Our politicians intone all kinds of loose rhetoric about neighborhoods and affordability and the environment. In practice, they're filling Gotham's landfill's with historic structures and rubber-stamping new development out on the green fringes - where most of them live. And don't get me started on affordability - these armchair idealists can't figure out from their suburban manses how to get workforce housing renovated and re-occupied in the areas that need it most. And the citizens of Gotham just re-elected these demolition-crazy louts!

Really, it's why I live in a frickin' cave. 1) No one can tear it down and 2) I just have to go someplace where I can't hear their moralistic, hollow b.s. Yeah, yeah, I know. I should be out fighting crime.

Wow, what a beautiful building.

My grandfather attended there as did my mother during the 1950s. My mother always remarked how beautiful the building was. She always stated the hallways had hardwood flooring and all classrooms had cloak rooms.

Just thought I'd share. :) Sorry, if that was annoying.

Not annoying at all - in fact, I love those kind of comments. If you have more to share about the school, I'd love to have it give some more life to the post.

Holy hickory, Batman. Have you done any radon testing lately? No obvious symptoms, of course, since you posted a great response. Kaboom!

It would be interesting to find out if any part of the structure was salvaged and reused. I'd like to think that there are some living structures today embedded with the memory of such a grand school.

Btw, and I hope this not be out of line, but on Tuesday, November 13, 2007 at 6pm in the Neighborhood Improvement Services Conference Room -- Heritage Square Shopping Center >> 401 E. Lakewood Ave. -- we are having another one of our next Neighborhood Revitalization Task Force meetings where I volunteer. This meeting, interestingly enough, will focus on deconstruction (saving materials) of houses that need, or are doomed, to be demolished. It might prove to be a good visit. Maybe get a few more citizens revitalized themselves.

Nonetheless, thanks for the video, Gary. It was quite interesting on many different levels. Cute, real and emotional too. I'm thinking of putting it to music. :)

Glad you liked the video, EDV.

I'm puzzled by this deconstruction thing = hard to see it as anything other than a way to try to deflate the environmental argument for preservation. So if we remove an entire neighborhood and recycle the materials, is that a good thing? I guess it seems to me kind of like cheating on your spouse but using protection.

There are houses out there that are very badly damaged (i.e. burned with smoke and water damaged, mostly collapsed) that I agree need to go away - and I'm happy if those materials are recycled rather than going to the dump. But fundamentally, most houses the city demolishes shouldn't be demolished or deconstructed in the first place - from a cultural perspective, an aesthetic perspective, and an environmental perspective. By deconstructing, one dismantles embodied work - i.e. the captured energy of workers who put the thing togeher in the first place. Rather than deconstructing, why not add construction to the existing building to bring it up to code? This minimizes resource extraction as well.

The only other solution is to move historic housing to somewhere where someone will fix it up and this, to me, should be your last ditch strategy - as it fundamentally harms the cultural reason for preservation. But move 85% of the buildings that the city wants to tear down out of a socioeconomically depressed neighborhood to an economically successful neighborhood, and they would be rehabbed. This is, most fundamentally, why I think the demolition of housing as a core neighborhood 'revitalization' strategy is flawed - the houses aren't the problem. Poverty is the problem.

Deconstruction's only good as a very last option; someone gets to reuse some cool architectural materials and it doesn't wind up in the landfill. BUT, the structure is still gone from the neighborhood no matter how it's removed.

Concerning your edit...do you know if it was still being used as a school building? Or had it already been abandoned?

Still trying to flesh out the details on the demise of this school....

Completely agree with your sentiments about deconstruction. I think everyone agrees that it's a last resort sort of thing, and I hope to learn more at the meeting getting more insight into the process.

However, I'm all for moving a house rather than destroying. Mind you, only if the home is at confirmed risk of demo at its original site.

Ya know, it would probably be a good thing for you to be at that meeting. ;)

Anyway, back to pix, I just noticed the steps that, now, basically lead to nowhere (toward the fence around the parking lot next to the church). They were never removed. They sort of appear like a gravestone or monument now, what with your essay and photo account. I'll definitely need to pay another visit.

To me the video of Edgemont students is priceless as I, quite by accident, saw my late mother and her twin sister nonchalantly walking down the sidewalk -- apparently oblivious to the filmmaker! There they were as children dressed identically in dresses and coats obviously made by my dear grandmother. What a gift, especially since my mother died rather recently in January 2008. I consider the video as a visitation from above! Thank you to all involved.

went 1st thru 3rd ...was in the second grade when the Shepard space shot & John Glenn orbits happened. the whole school went into the audtorium where a 19 inch t.v. with rabbit ears was set up on stage to see history in the making :) ...also the older students were put in the front row seats { because they understood what was going on ?}