The residence of two Durham mayors - Edward Hackney and Charlie Markham, 204 North Dillard is arguably the most elaborate Victorian structure remaining in Durham. 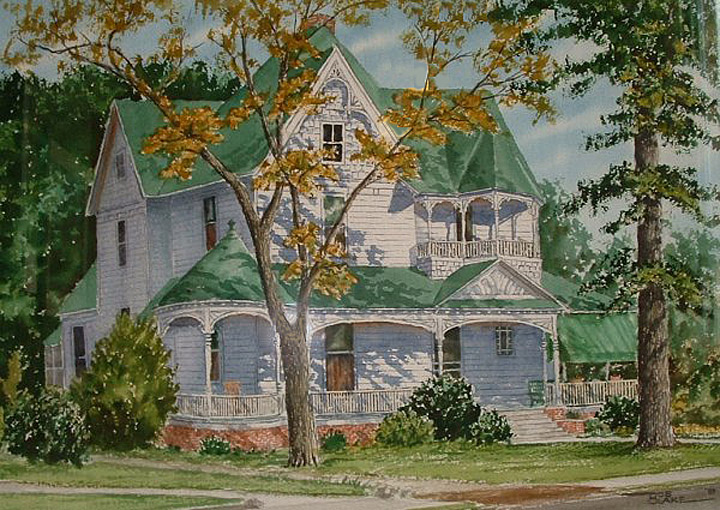 The east side of downtown to Dillard St. was built out by the 1880s with 1- and 2-story houses that were minimally decorated. As Durham's tobacco industry continued to grow, so did the wealth of merchants and manufacturers. They began to replace the earlier houses with larger, more ostentatious structures. The first of these on Dillard St. was the EJ Parrish house at 108 N. Dillard. If you look at the oldest picture of that house, you can see another house to its north that represents the earlier generation.

William Stone, who established the Stone and Ellis department store, lived at 204 N. Dillard St. during the 1890s. JA White next lived at the address around 1900.

Although the inventory puts the build date of this house coincident with William Stone, the Sanborn fire insurance maps clearly show that the unique outline of this structure is not present in 1898 - appearing for the first time on the 1902 maps. I speculate that the house may have been built by JA White.

Or it may have been built by Edward Hackney - who was mayor of Durham in the early 1880s, served as the Durham County Attorney, owned and edited The Durham Recorder and worked as an officer in his father-in-law's tobacco company - the Mallory Durham Cheroot Co, located on Parrish St. (Although I'm unsure exactly where this was, I think it must be related to the Hackney Block.

He only lived in 204 N Dillard St. until 1903, at which point it passed to his widow, and subsequently his daughter - who married Charles B. Markham. 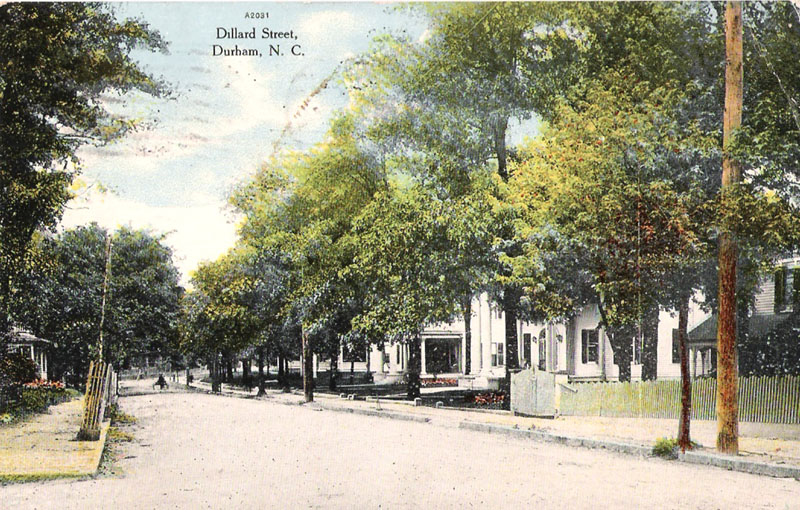 Above, N. Dillard St., looking north. The porch of 204 N. Dillard is visible at the far right.

Charles Markham had a lifelong association with Duke - first as student, then as a mathematics professor, and finally as treasurer of the university.

During the 1910s, a second story was added to the primary wing off the front of the house.

This property - the land, that is - took on an unusual shape during the 1920s - until that time, Liberty St. extended only as far east as N. Dillard. Beyond that point, the land dropped off rather precipitously. (In keeping with the historical economics of housing distribution, small low-income houses occupied these low-lands right behind the large houses.) During the 1920s, the city extended Liberty,which it curved in order to link it with Lottie St., which paralleled Holloway a bit to the east, beyond the lowest point east of Dillard. This left 204 N. Dillard with an arcing southern property line, so that the property comes to a point on the eastern end.

In 1947-48, architect Charles Hackney (descendant of Edward Hackney) designed a kitchen renovation for the house - the blueprints from this were with the house in 2005. 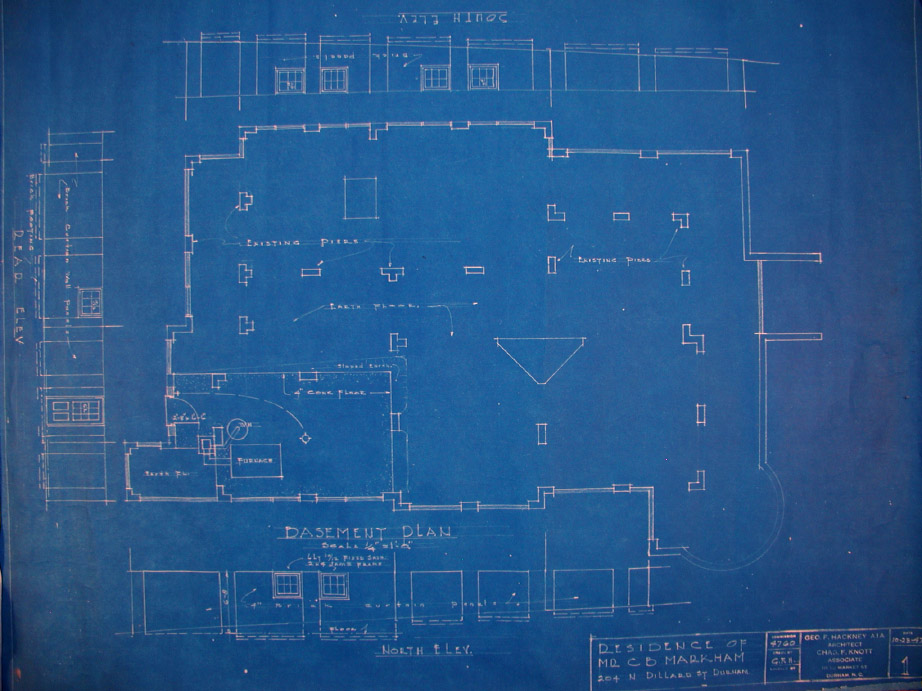 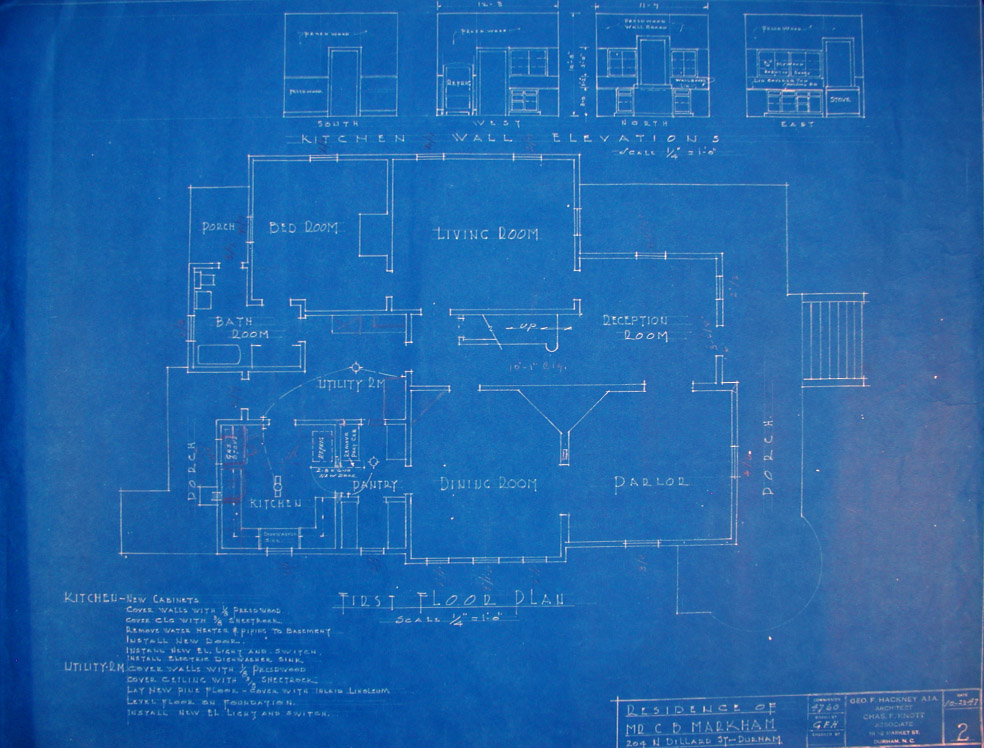 Three of the children of Charles Markham and his wife continued to live in the house after their parents were deceased - two daughters and one son. The son, Charles "Charlie" Markham, Jr. was an attorney in New York and Durham and a law professor. 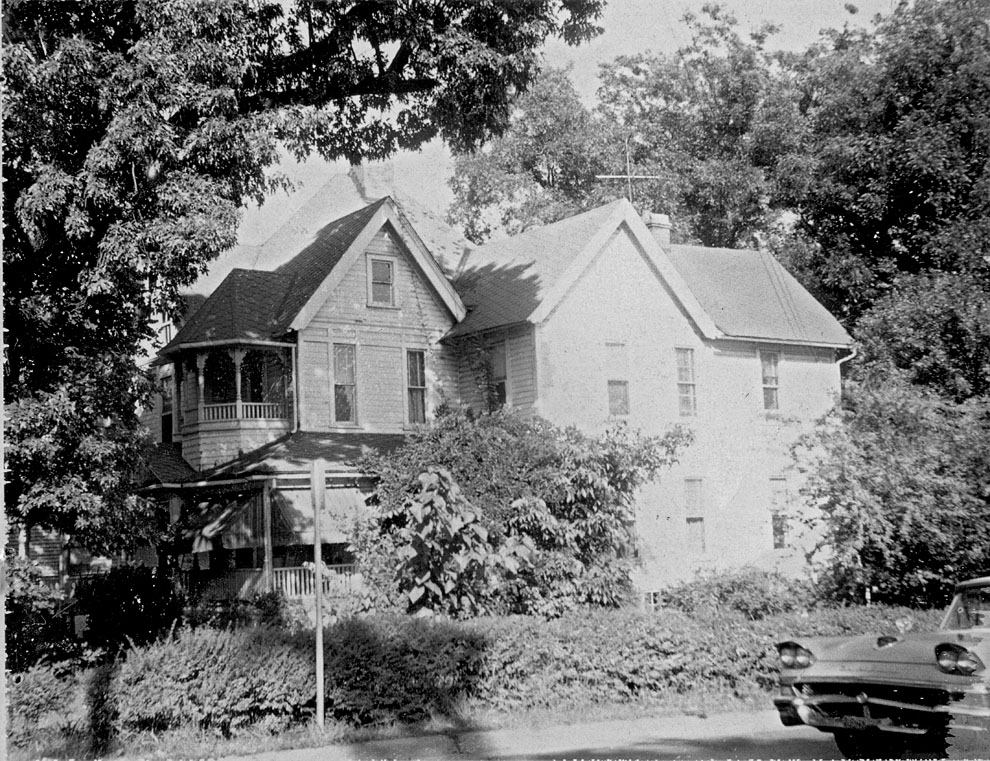 Below, a difficult to read front-view of the house, 1964. 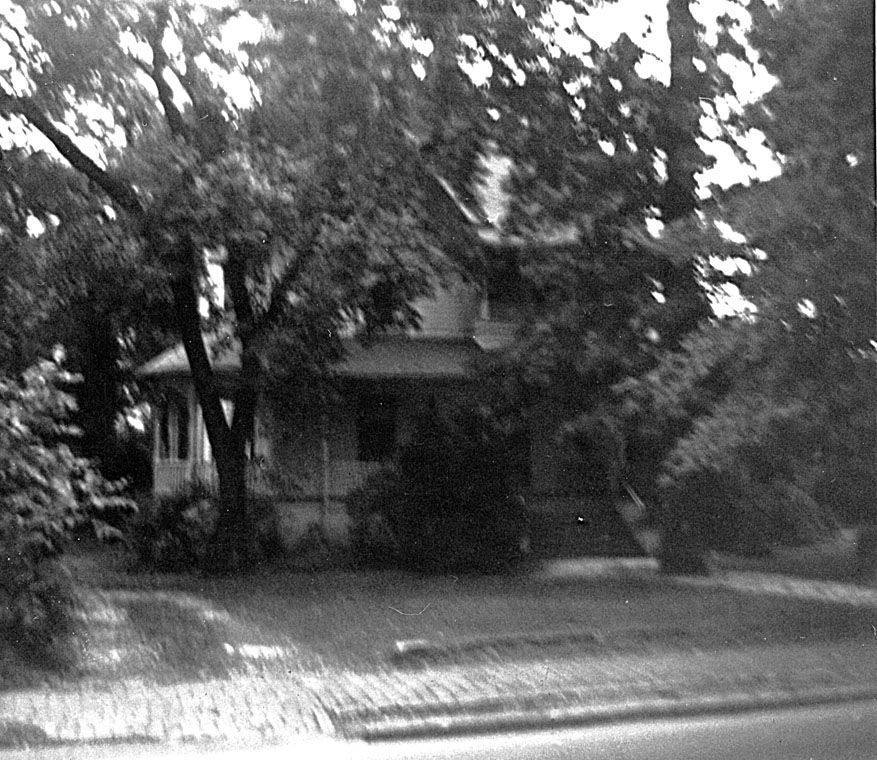 While the Urban Renewal-ists originally intended to take and demolish every structure in this neighborhood east to the railroad tracks, Charlie Markham helped mobilize the neighborhood to fight the demolition of structures between Dillard and the tracks. Evidently this modification passed the city council by 1 vote. However, the neighborhood on the other 3 corners of Dillard and Liberty was demolished. During the late 1960s or early 1970s, 210 N. Dillard and 212 N. Dillard were also demolished, leaving this house and 206 N. Dillard next door (also owned by the Markhams during this time) as the lonely remainder of the old neighborhood on Dillard. 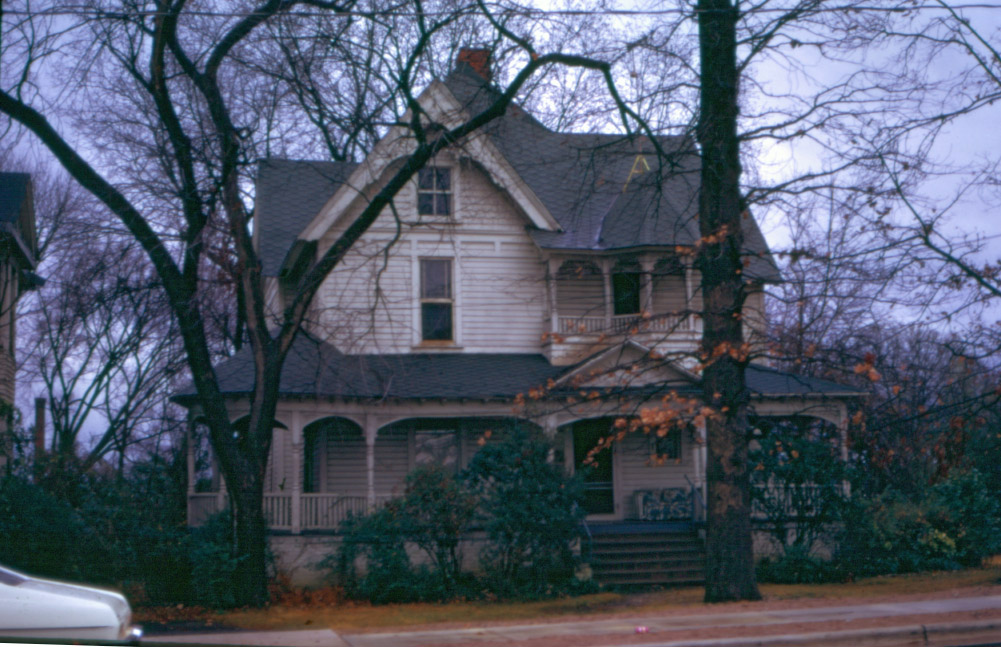 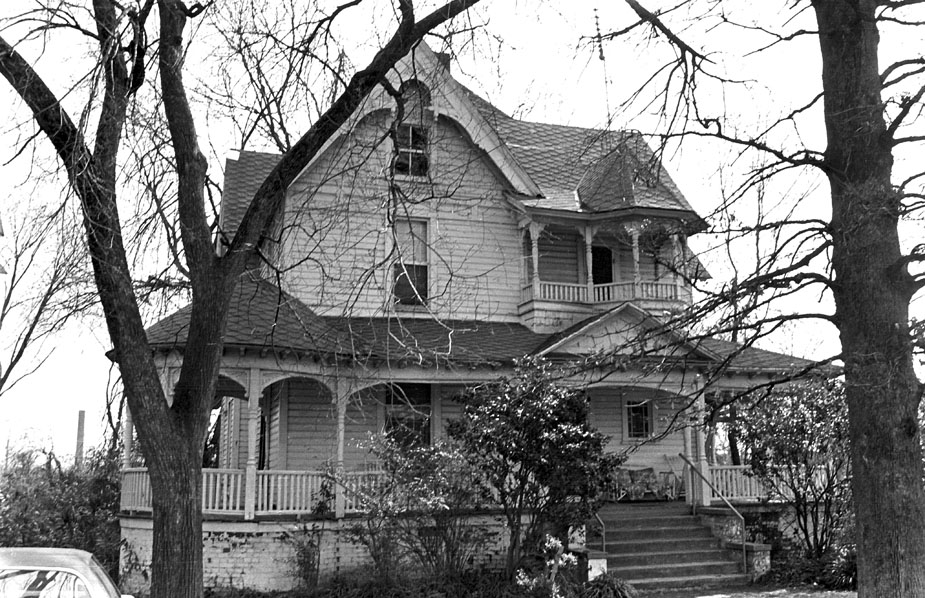 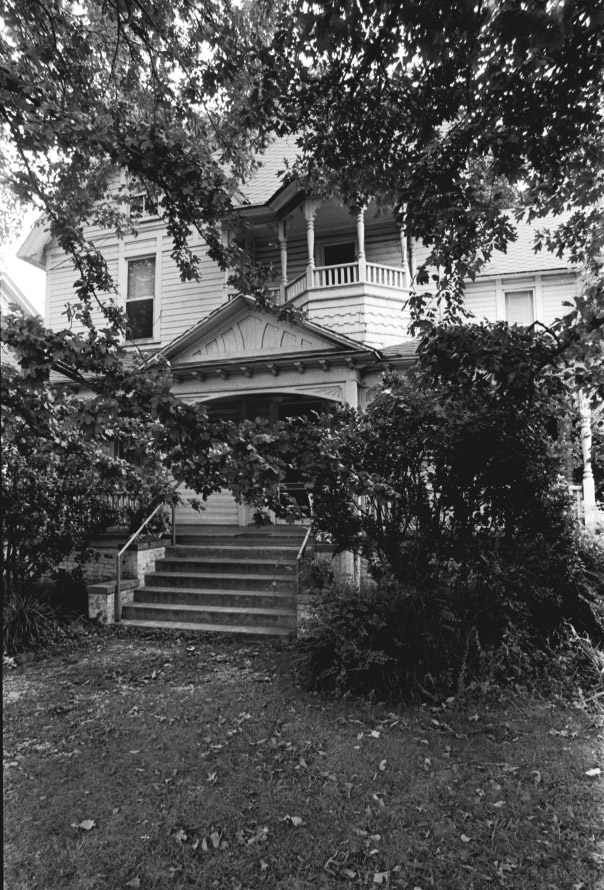 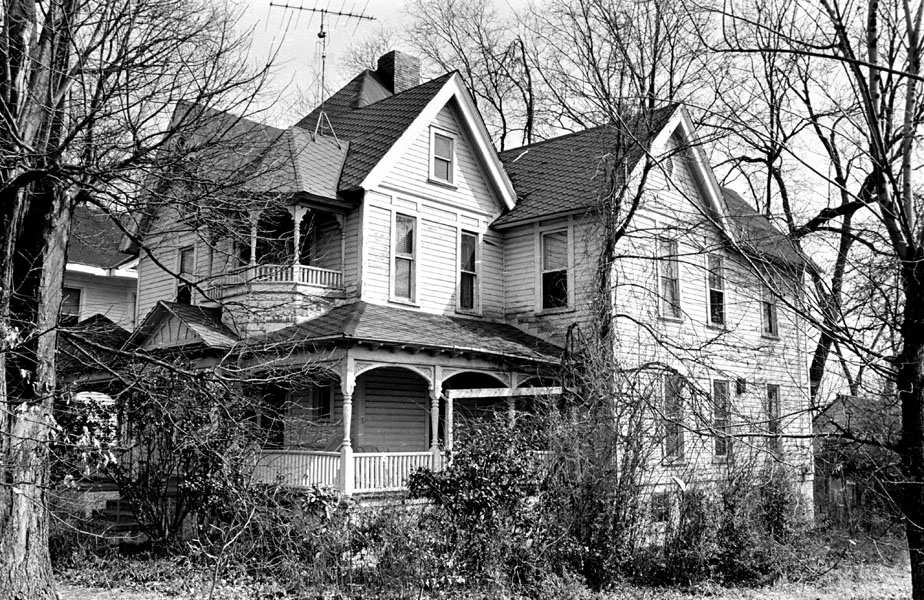 The northeast view, from Liberty, mid-1970s. This also shows the old servant's quarters/guest house/garage outbuilding behind the house, later demolished. 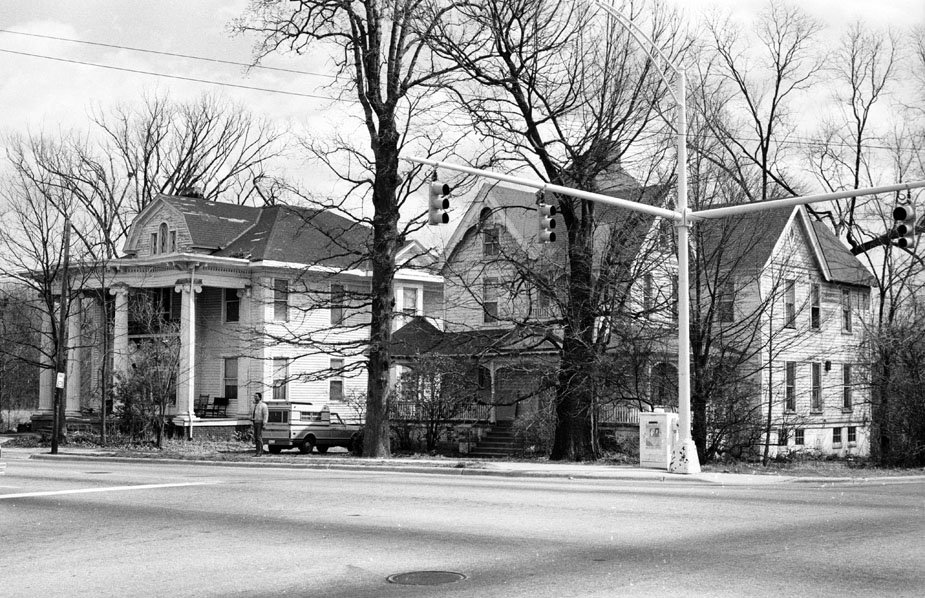 Charlie Markham became mayor of Durham in 1981 - 100 years after his grandfather - making him the second mayor of Durham to live in this house. I don't know much about his term as mayor, although it seems that the first wave of downtown redevelopment - Brightleaf Square, the Civic Center - got started under his watch. Jim Wise has also noted in the past that he is "forever tied" to the 'big pickle' (or choose your own epithet) out on Chapel Hill Blvd. - although I don't know how.

Also under his watch was the conversion of the Durham Hosiery Mills No. 1 to Section 8 housing using HUD funding. This caused trouble later, as I noted at that post, when it turned out that HUD had not recommended the project, but the Secretary of HUD overruled - and he and Charlie Markham were part of the same New York law firm.

Charlie left office in 1985, and continued to practice law in Durham. He and his two sisters continued to live in the house through their deaths. In 2000, Charlie fought once again for Cleveland-Holloway with other members of the neighborhood, unsuccessfully attempting to prevent the expansion of the homeless shelter because of the overconcentration of social services in Cleveland-Holloway. 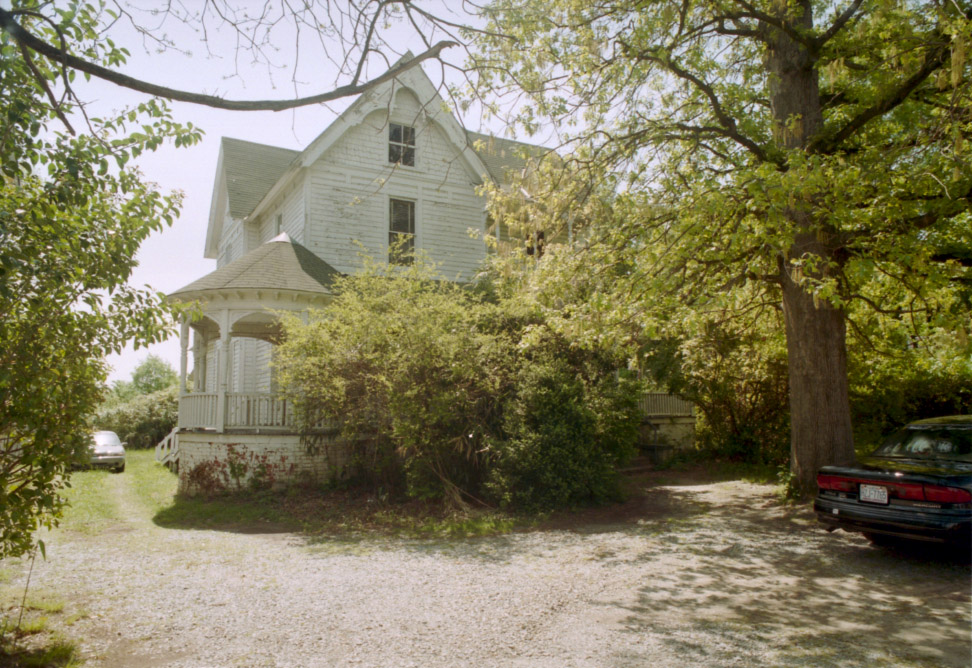 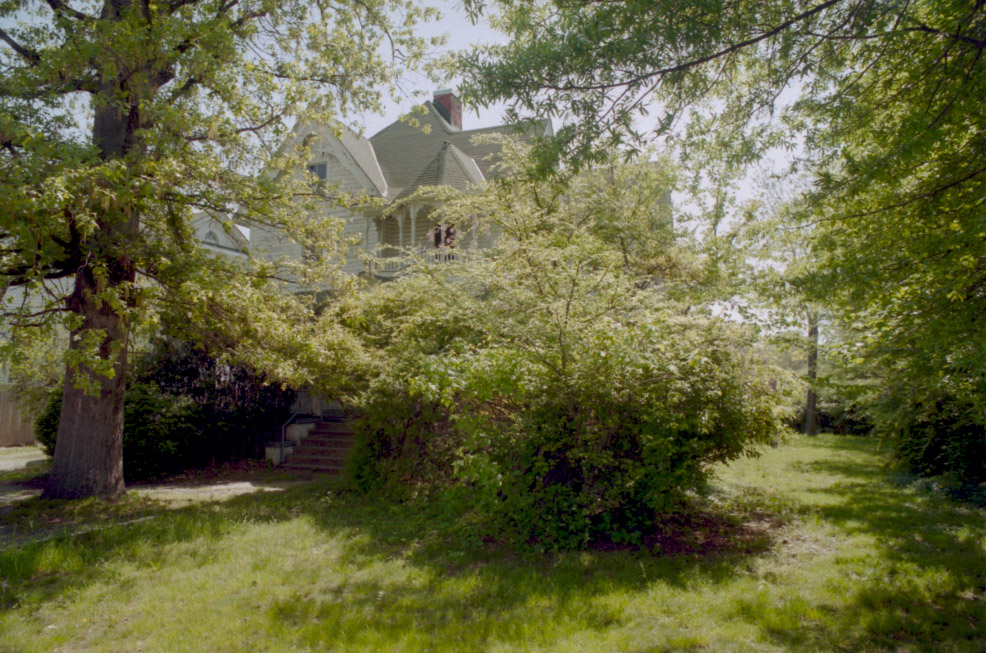 Charlie left the house in 2005 - moving to a rest home, and the house was sold to new owner-occupant Keelee MacPhee. Having been inside this house, I can say that the amazing thing about it is that, for better and for worse, aside from a kitchen renovation in the 1940s, almost nothing had been altered in this house in 100 years. 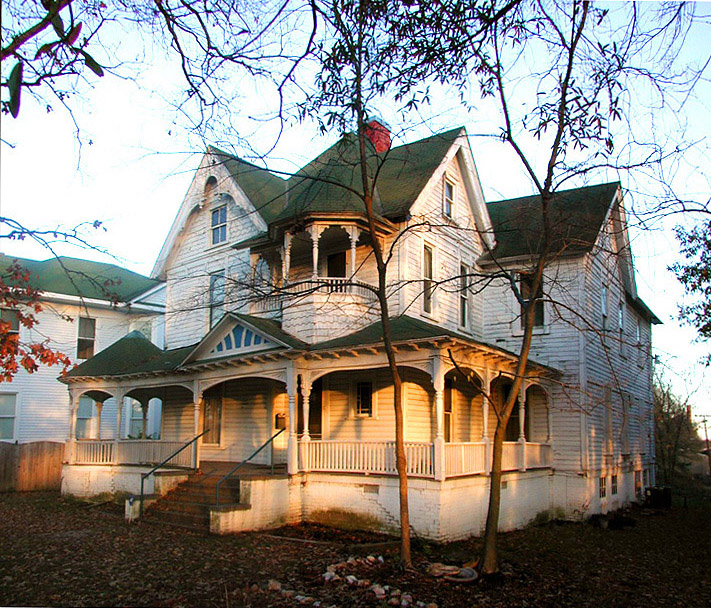 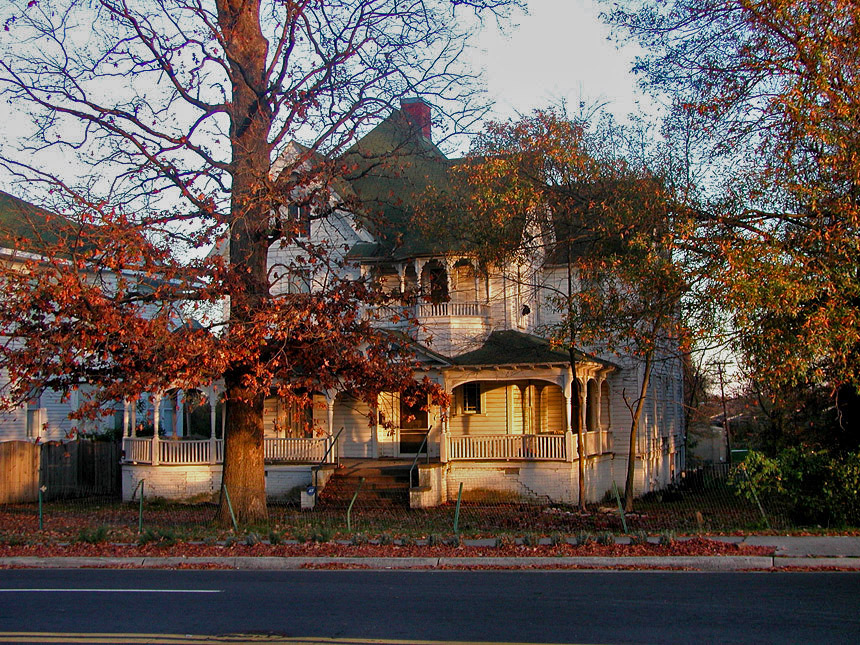 After little exterior change since the house changed hands in 2005, the house is undergoing a full renovation as of 2011, which includes a new addition onto the rear of the house. 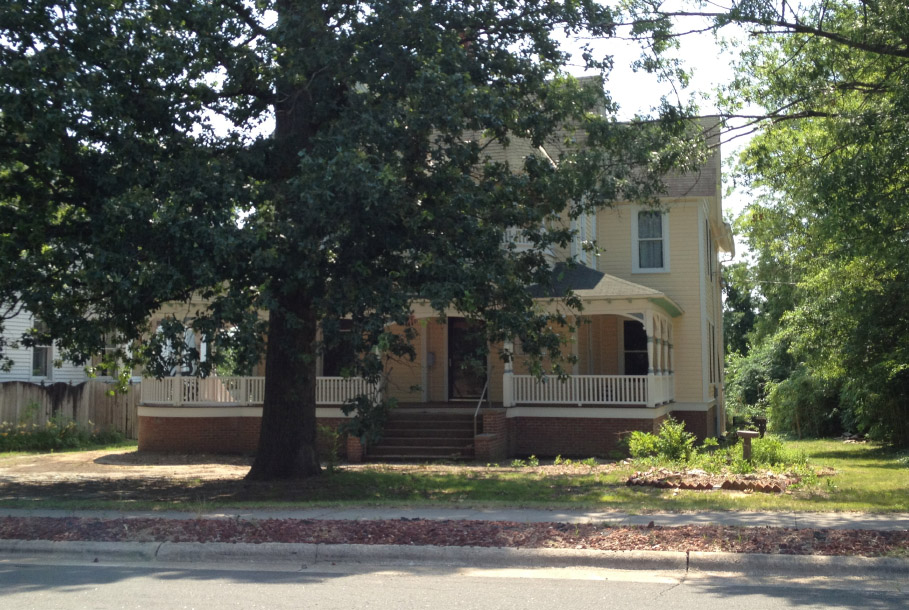 The house received a Pyne Preservation Award in 2012 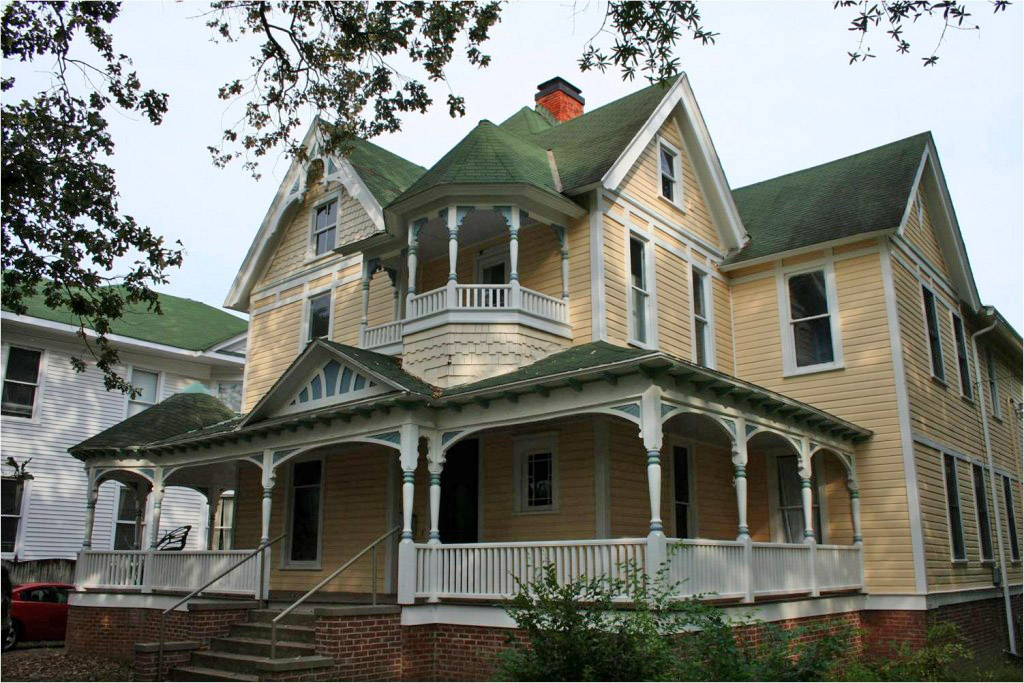 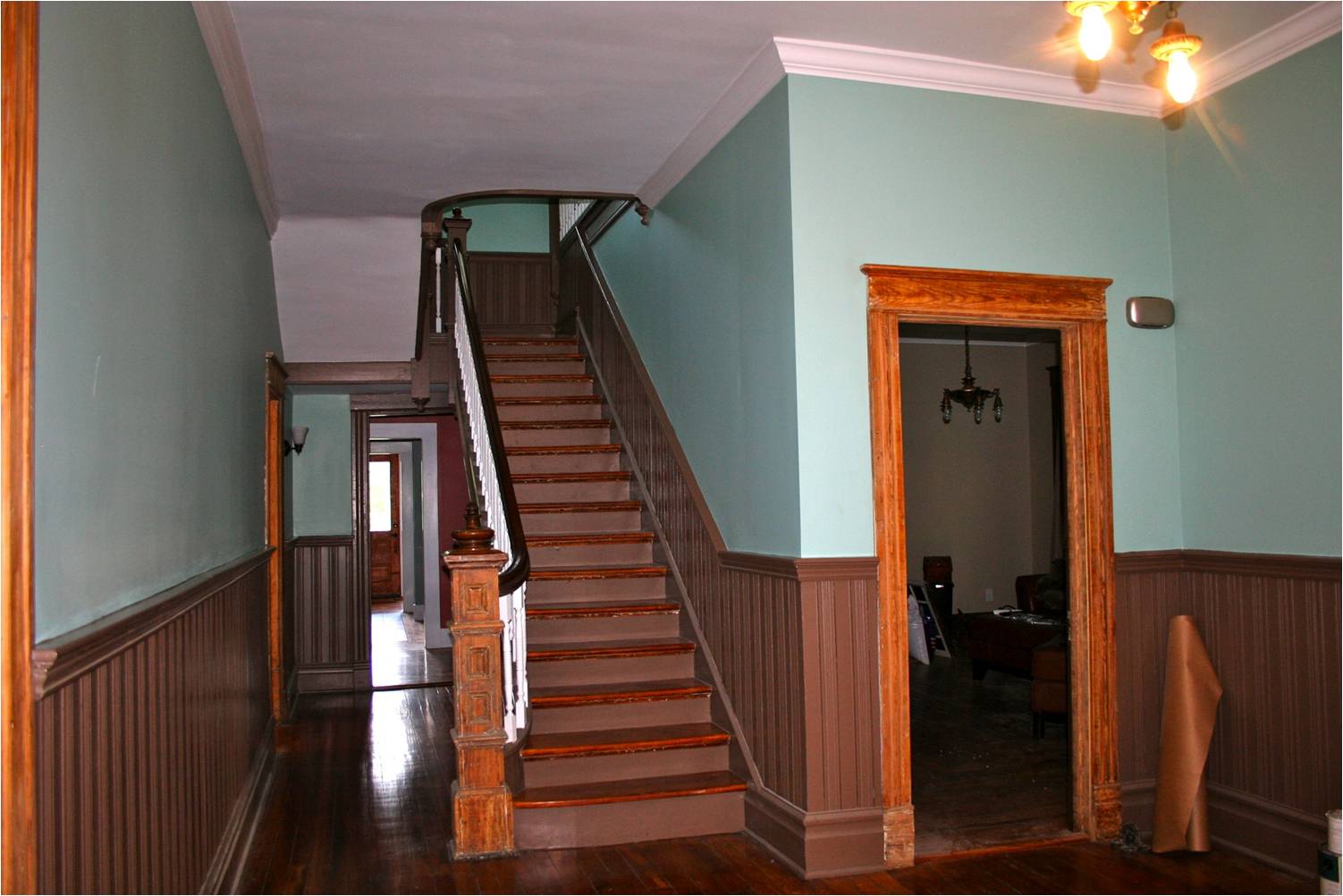 Thank God for a happy ending

Thank God for a happy ending now and again.

By the way, I think the civic center was done under Wib Gulley.

I am curious. I have been

I am curious. I have been driving past this house twice daily for the past year and a half and have never seen any actiity. What are the current owner's plans for renovation?
Bob 12.26.08

Mr. Markham died earlier this year (2010). Here's the obituary that ran in the Herald Sun:

Mr. Markham was a retired attorney and former law professor. He was active in national and state politics for both the Democratic and Republican political parties.

Mr. Markham, born September 15, 1926, was the youngest child of Sadie Hackney and Charles Blackwell Markham, a former Treasurer of Duke University. Charles Markham was predeceased by his parents; an infant older brother, Charles Blackwell Markham; and sisters, Eleanor Mallory Markham, Sarah Hackney Markham and Charlotte Markham Shuford. He remained in the family home, 204 N. Dillard Street, where he and his siblings were born until poor health caused him to move in 2004.

He is survived by his nephew, T. M. Shuford Jr. and his wife, Joyce, of Elon; a grand niece, Tracy Shuford; and grand nephew, Brian P. Shuford, and his children.

Charles Markham was the grandson of John L. and Ella Blackwell Markham and Mayor and Mrs. Edward C. Hackney (the former Lyna Mallory). John L. Markham was one of the first 100 residents of Durham, having moved here in 1869 from the Markham farm on the Old Chapel Hill Road. He served as Town Clerk. John L. Markham was descended from the Herndon, Markham and Pearson families, early colonial settlers of the area before the establishment of Durham County. Also Charles Markham was a grand nephew of William T. Blackwell, founder of Blackwell's Bull Durham Factory.

Edward C. Hackney was elected Mayor of Durham in 1881, was the editor and publisher of the Durham Recorder (a predecessor of the Durham Sun) and an officer of the Mallory Durham Cheroot Company headed by his father-in-law, John Mallory, an early manufacturer of cigars.

Charles Markham's education commenced at home when his sister, Sarah, taught him at the age of four to read the newspaper. He moved through the Durham Public Schools -- Fuller Grammar School, Central Junior High School and Durham High School from which he graduated in 1942.

In 1945 he graduated from Duke University where he was prominent in extra curricular activities, serving two years as editor of the student newspaper, The Duke Chronicle. Charles was honored by membership in the leadership societies, Phi Beta Kappa, Omicron Delta Kappa, Phi Delta Pi and the social fraternity, Phi Delta Theta.

As a reporter for The Durham Sun in 1944, Markham, an undergraduate at Duke, covered the Democratic and Republican Conventions.

He joined The Charlotte News as an editorial writer and State Editor, 1947-48. Moving to Washington, D.C., he served as Director of Publicity and Research for The Young Democratic Clubs of America, 1948-49 and later was promoted to Executive Secretary of the organization, 1949-50. 1950-51 found him working as a political analyst for The Democratic Senatorial Committee in Washington, D.C.

Charles commenced law school studies at UNC CH in 1946, joining the celebrated Class of 1948 that included many, who, in later years, became outstanding lawyers, educators and state officials.

He completed his law studies at George Washington University, District of Columbia, in 1951.

[Truncated by the blog server. See the hyperlink for the rest of the obit.]