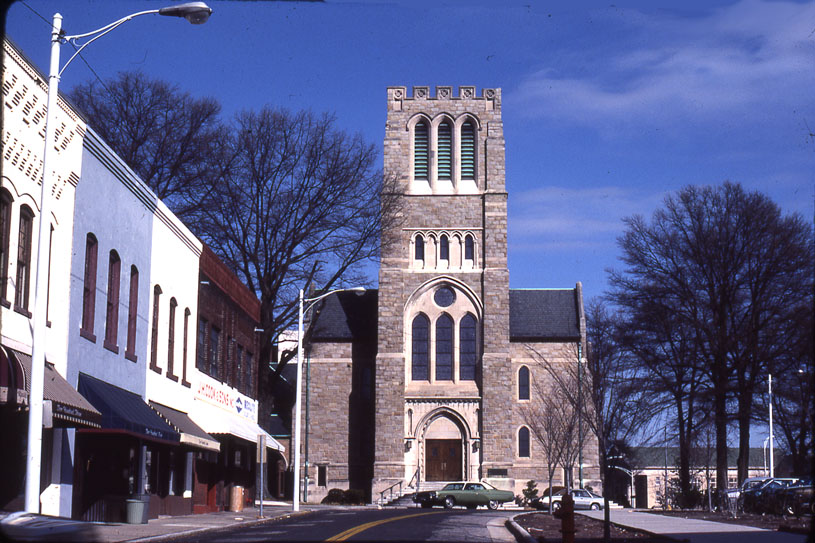 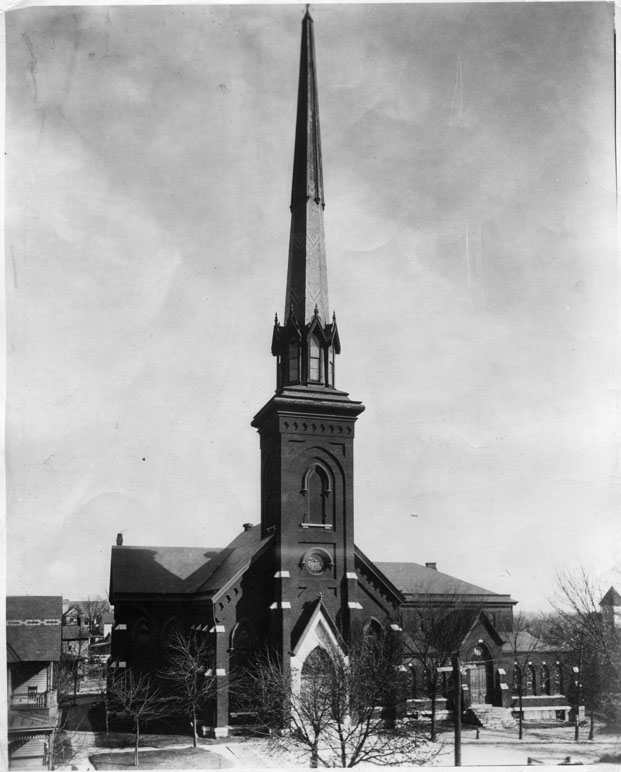 Trinity Methodist was the second church established in Durham. Like First Baptist, it originated elsewhere and moved to Durham. In 1830, a church revival was organized in a one room schoolhouse 1 mile east of what would later become Durham, along the Raleigh Road (Angier Ave.) From this, a church was organized, which was named Orange Grove after the schoolhouse. William R. Herndon donated a building and an acre of land for the church in 1832, but Jefferson Dilliard burned the church in 1835 for reasons unknown. A new building was built in its place.

By 1860, Prattsburg was in decline and the church decided to move westward to the new but increasingly successful town of Durham. RF Morris donated a piece of land on Cleveland St. (where the First Baptist Church now stands) but the church decided on a different location, in a "grove just to the east of Cleveland St." evidently near the corner of Liberty and Roxboro. 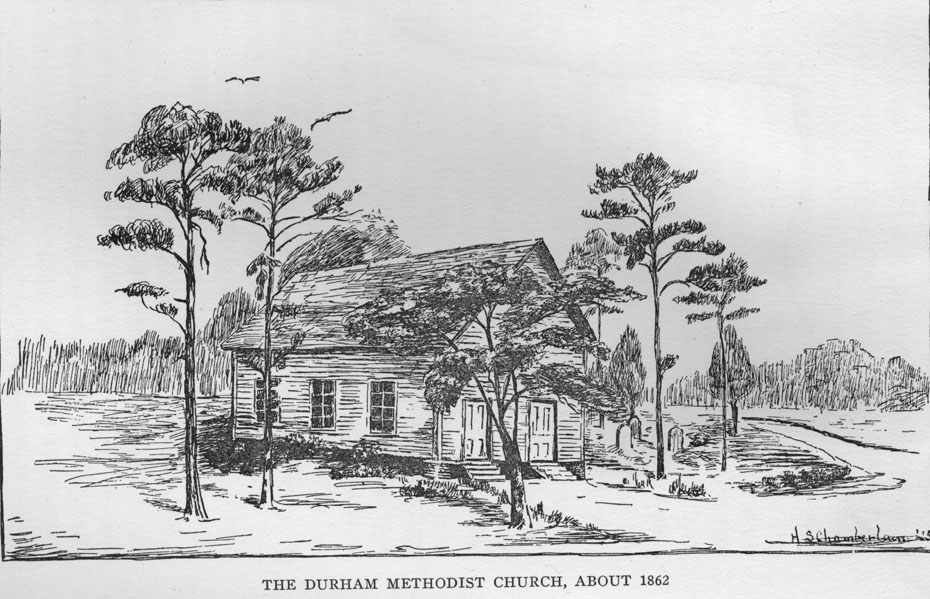 There the frame church building existed until 1880, when a large brick structure with a 120 foot spire, remodeled in 1890 and pictured above, was built at the head of North Church St.

Below, a closer look at the front of the structure. 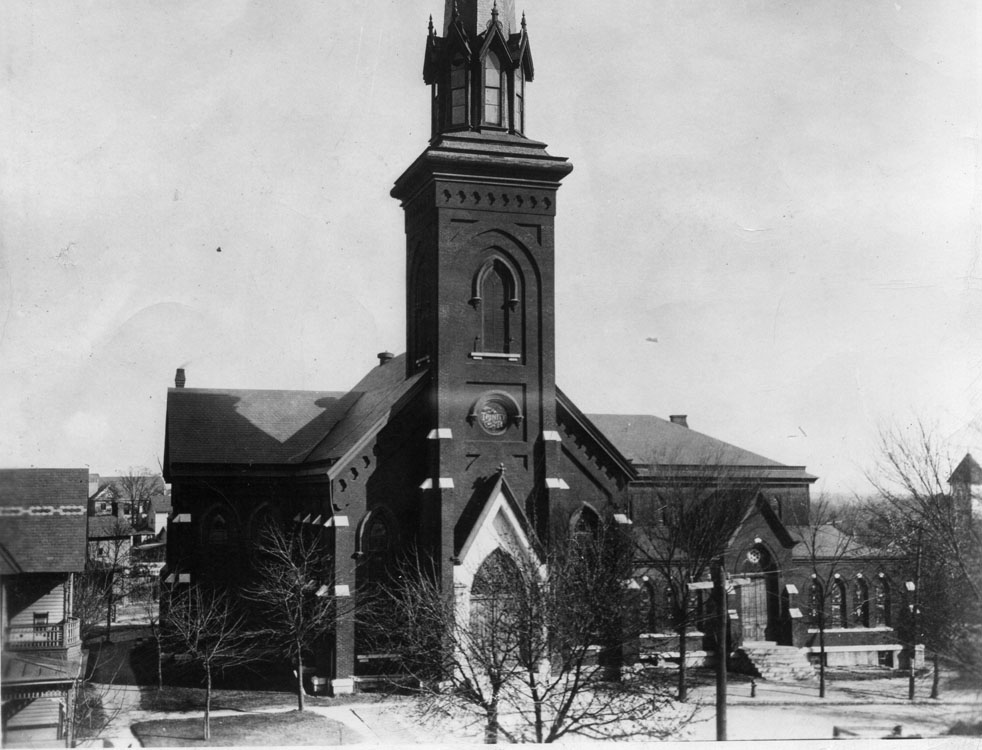 A parsonage was built immediately to the west of the structure, partially visible in the above picture. 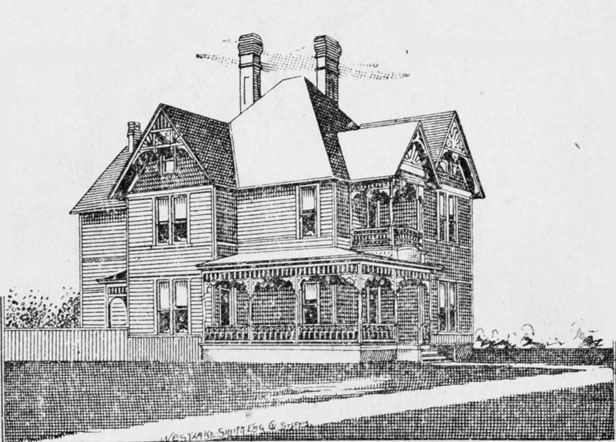 The parsonage, circa, 1895.
(Courtesy Duke Archives)

As mercantile structures were built along Church St., connecting the Church with the courthouse area nearby on East Main St., an impressive urban vista was formed, which was completed by the construction of Union Station, such that the passengers disembarking from their trains to Durham would see this sight. 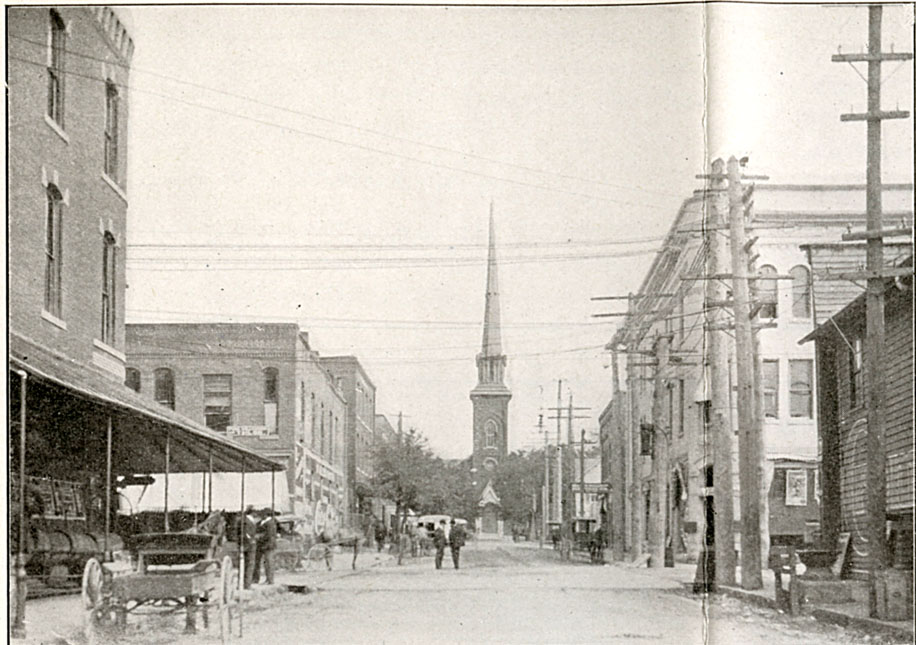 Once the best terminating vista in Durham - the view from Union Station, looking north up Church St. at Trinity Methodist - circa 1905.
(Courtesy Duke Archives)

Unfortunately, the impressive structure burned to the ground on a Sunday morning in January, 1923, the steeple evidently 'telescoping' to the ground as the Sunday School children looked onward (accounts differ.) 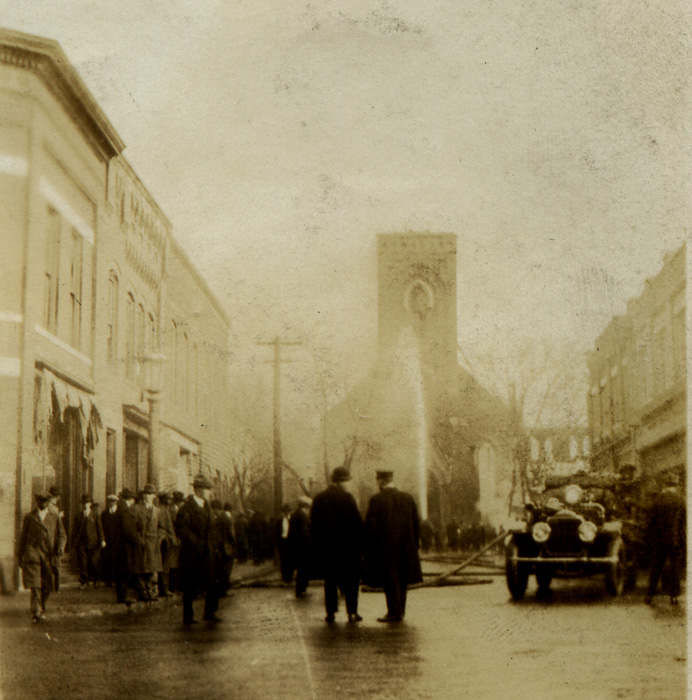 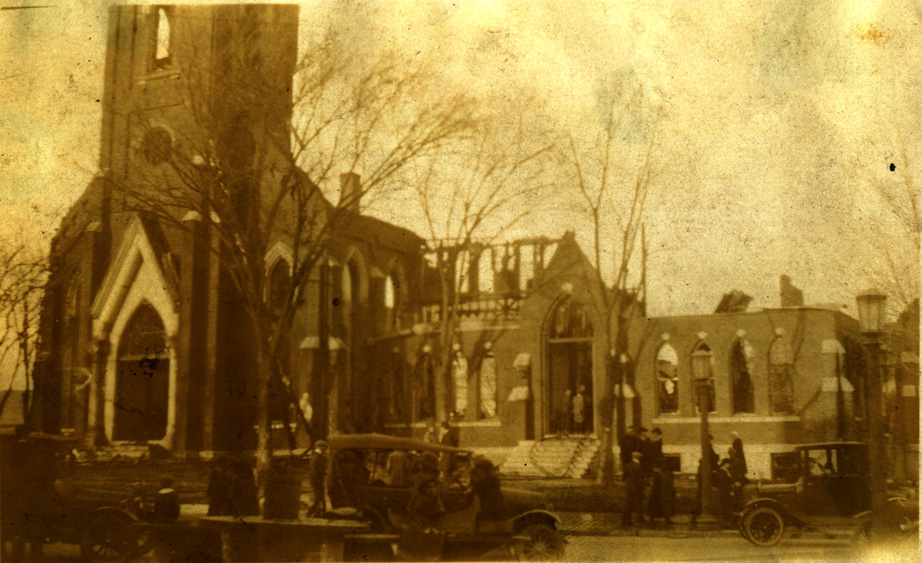 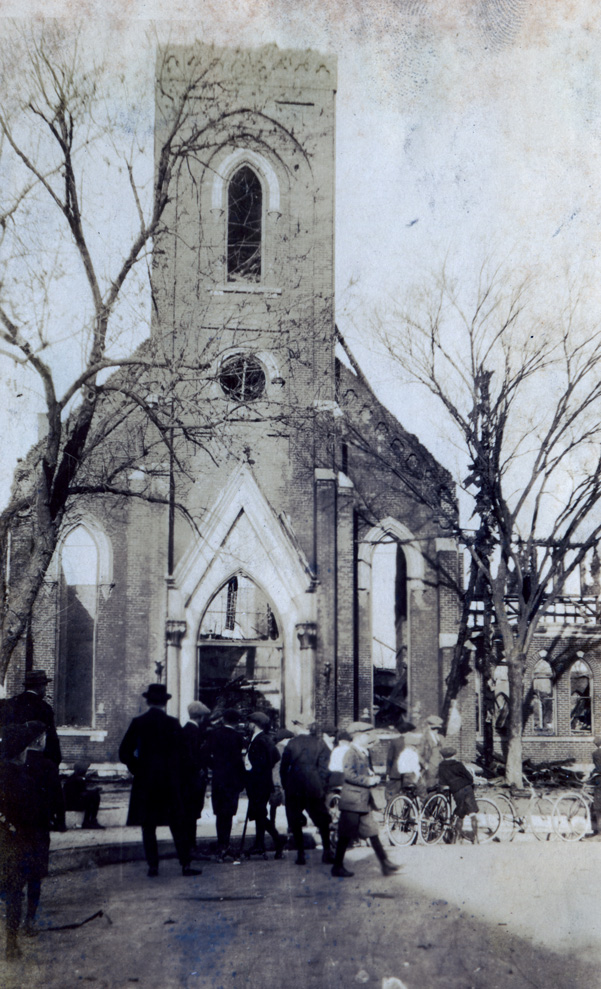 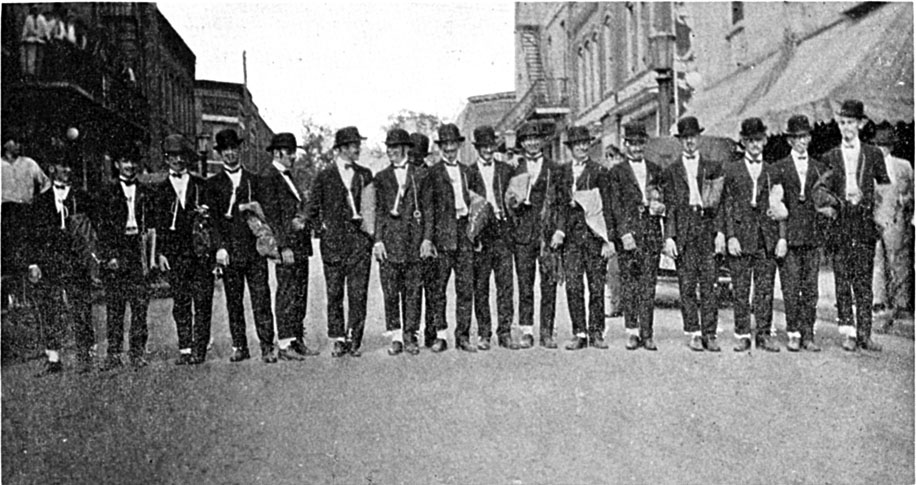 The church soon began to rebuild, and used Ralph Adam Cram as their architect - who 17 years earlier had designed St. Philip's Episcopal. He built a more formal and elaborate Gothic structure - under construction in the picture below.

The story goes that the church ran out of money before they were able to construct the steeple of the church, although it looks like a fairly classic Gothic structure without the steeple. It was completed in 1924. 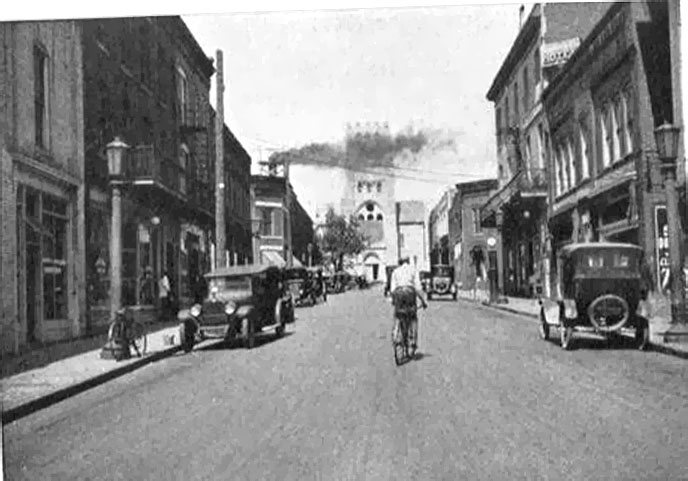 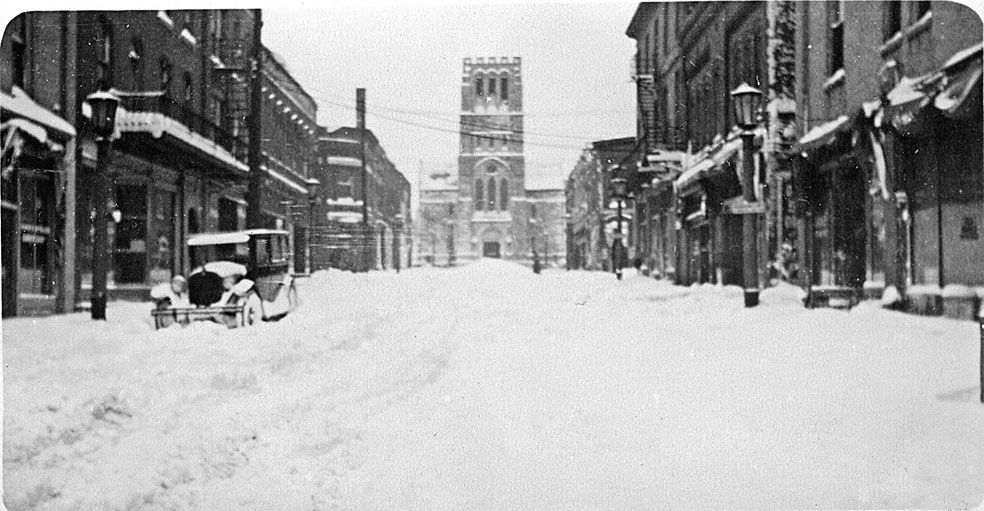 The church was one of the 'big four' that stayed in downtown, although the landscape around them became less residential, more commercial, and eventually, more barren as time went on, including time with bail bondsmen and X-rated movie theaters as their neighbors. The impressive vista was severely compromised by the demolition of Union Station and the construction of a parking lot in its stead. This, and the demolition of the structures on the east side of North Church St. meant the view was no longer as visible or as impressive.

In 1985, the church added a steeple to the top of the church. 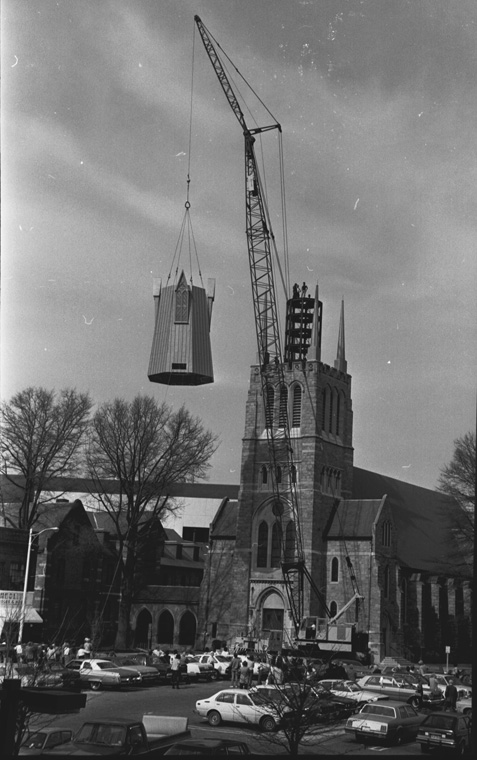 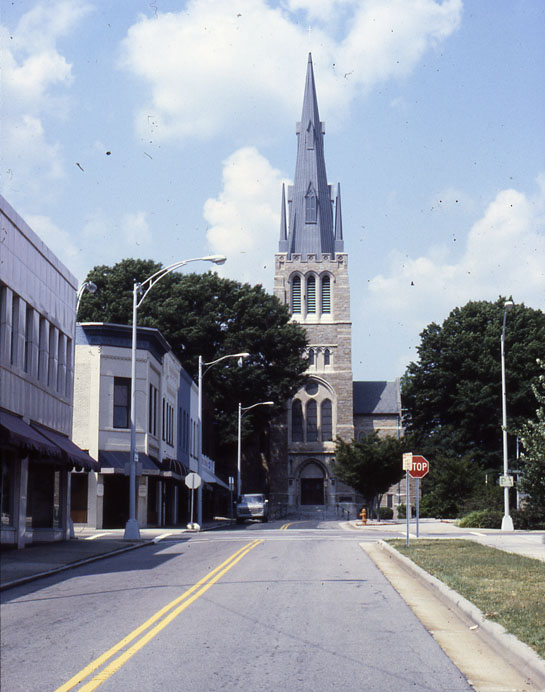 It is still an impressive view north to this structure, if you can get far away enough to really take it in. To get the shot below, I had to contort myself a bit from the deck of the parking garage. 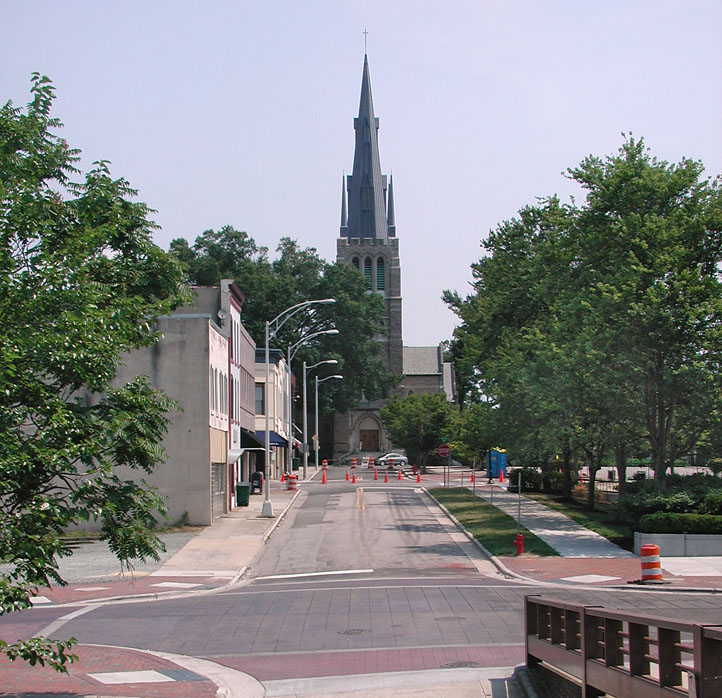 I hope that, someday, Church St. will open to Ramseur (i.e. bye-bye deck) and streetscape will be rebuilt on the east side of Church St. When that happens (I'll be optimistic) I think this can become a very cool urban space.