Date of birth
1863
Date of death
1942
Can you help?
You don't need to know everything, but do you know where they were born?
Log in or register and you can edit this.

From the NC Architects page:

Ralph Adams Cram (1863-1942), FAIA, was a leading architect in New York and Boston best known for his Gothic Revival style churches in those cities and elsewhere in the nation. Two of his firms, Cram, Goodhue, and Ferguson, and Cram and Ferguson, planned buildings in North Carolina in the early 20th century, five of which--a house and four churches--have been identified.

The son of a Unitarian minister, Cram was born in Hampton Falls, New Hampshire. After schooling and training in New England, he opened his first architectural firm at the age of 24 with partner Charles Wentworth. Another architect, Bertram G. Goodhue, became a partner in 1891, and the firm was renamed Cram, Wentworth, and Goodhue. After Wentworth's death, the firm became Cram, Goodhue, and Ferguson until Goodhue left to develop his own distinguished career.

Cram was an "ecclesiastical architect," who was also known as a philosopher and author. A deeply religious man following a conversion experience, he believed that churches should be in authentic English Gothic architectural style as an indication and promoter of religious faith amid the troubles of an industrial and material age. (Ironically, many of his buildings were for major industrialists and financial leaders, and their congregations.) A large portion of his work comprised Gothic Revival churches for Episcopal congregations. He also adopted the English Gothic and Collegiate Gothic styles for many college and university buildings, most notably at Princeton University.

The firm of Cram, Goodhue, and Ferguson gained prestigious projects that earned them a national reputation: rebuilding the U.S. Military Academy at West Point, NY in 1903, designing the Cadet Chapel at West Point, and designing the Church of St. Thomas on Fifth Avenue in New York. With those projects to his credit, Cram was offered the major commission of building the Cathedral of St. John the Divine in New York, for which he had submitted plans in 1907. The Cathedral, many years under construction, remains his best known work. After Ferguson died in 1925, the firm continued to be known as Cram and Ferguson, with three young architects becoming partners. Cram won many awards and held leadership roles in many societies and organizations including the National Institute of Arts and Letters, American Academy of Arts and Sciences (Fellow), member and former President of the Boston Chapter of the American Institute of Architects, and Fellow of the American Institute of Architects. After retiring in 1930, he lived at his estate, Whitehall, in Sudbury, Massachusetts, but maintained his firm in Boston until his death.

Cram's prestigious firms attracted work from clients across the nation, primarily in northern states. He did relatively little work in the South, but in North Carolina he and his firms gained a number of commissions, primarily Episcopal churches in growing cities. The first of his known North Carolina commissions, which probably brought him to the state, was through a family connection: he planned a residence in Hillsborough in 1904 for his sister-in-law, Susan Nash Read, and her husband Sheppard Strudwick. The Sheppard Strudwick House or "Tamarind" was designed in Southern Colonial style with a tall portico that fit into the traditional architecture of the small town.

Possibly through this association, Cram was employed to design St. Philip's Episcopal Church (1907) in the nearby industrial city of Durham, a small but powerfully composed church of rough, richly colored stone that epitomizes the spirit of the English parish church. Larger and more elaborately detailed was Trinity United Methodist Church (1924), also in Durham, in High Gothic style; the congregation asked Cram to plan their church after their first Gothic Revival style building burned in 1922.

Episcopalians in Asheville also commissioned a church from Cram, Goodhue, and Ferguson, and for this project evidently Bertram Goodhue was the principal designer: the severely dignified Trinity Episcopal Church (1912). Asheville architect William H. Lord served as local architect directly responsible to the vestry, and the surviving correspondence between Lord and the northern firm, chiefly with Goodhue, is long and lively (see William H. Lord, Trinity Episcopal Church Papers).

Cram and Ferguson's largest church in North Carolina was built for an Episcopal congregation in the industrial city of Winston-Salem, St. Paul's Episcopal Church (1928-1929) in a prestigious suburban location. When Cram saw its dramatic hillside site with a spectacular view, he reportedly said, "A man does not have many chances in a lifetime to build a church on a location such as this." His design reflected the site in its strong massing and granite walls rising to a massive tower, and sections of the building stepping down the hillside evoking an ancient hill town. 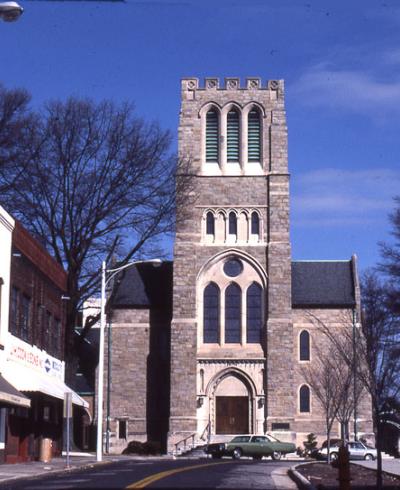 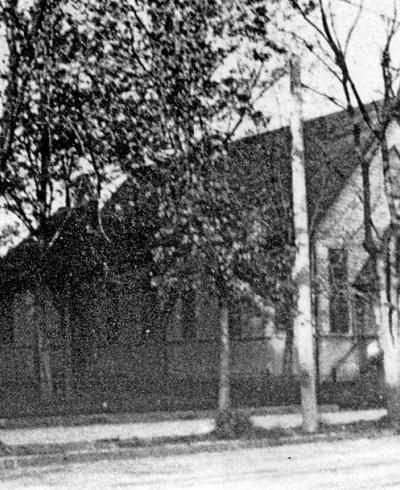 An Episcopal mission was organized in Durham in 1878 when a minister named Joseph Blount Cheshire was ordained and appointed rector of the Chapel Hill church, and Bishop Atkinson (who had preached the first Episcopal service in Durham) suggested that he should also devote time to the newly organizing Durham congregation if warranted. Cheshire...
Read More