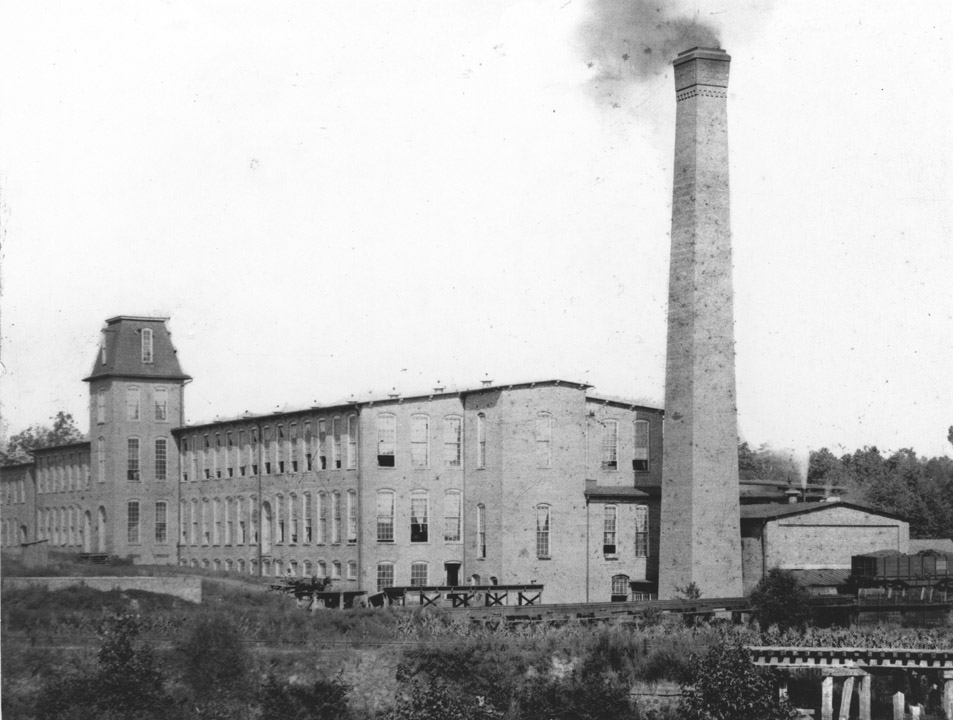 The Pearl Cotton mill was established by Brodie Duke in 1892, named after his daughter Pearl. After Brodie Duke suffered significant financial reversal in the 'Panic of 1893', Washington Duke and his two half-brothers helped him re-capitalize the company, along with George Watts, who became the new president of the company. By 1895, the mill had 200 workers, 10,000 spindles, and 160 looms "for making extra-wide sheeting" and was quite successful.

The Trinity Avenue Presbyterian Church, one block away at N. Gregson St., was the direct outgrowth of a Sunday School for children of mill workers which began onsite at the mill and met briefly in a house on Washington St. Prior to 1898, a frame chapel, called the Pearl Mill Chapel, was built at the southeast corner of N. Duke and W. Trinity. By 1913, this congregation and structure had become known as the 2nd Presbyterian Church.

It appears that the church may have been moved offsite to Gregson and Trinity in 1917. 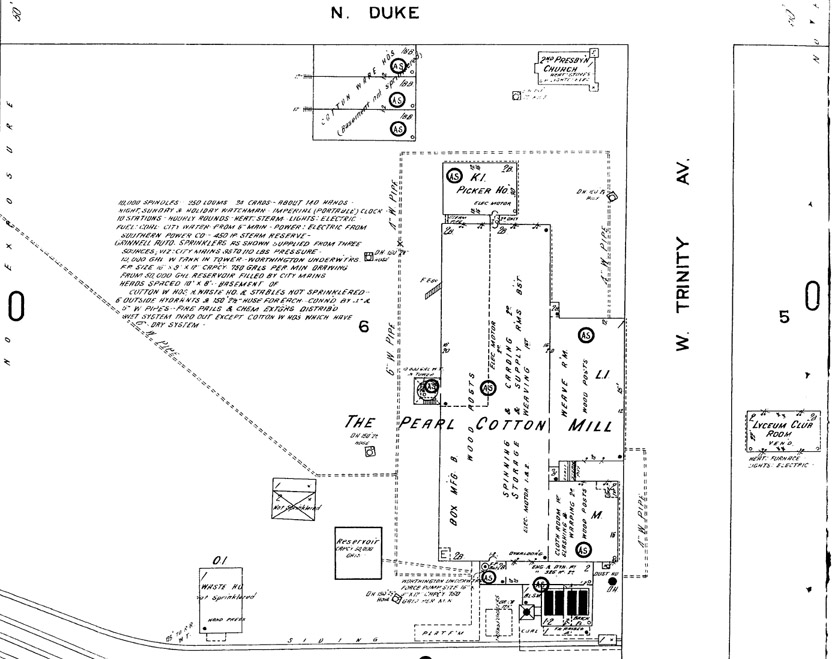 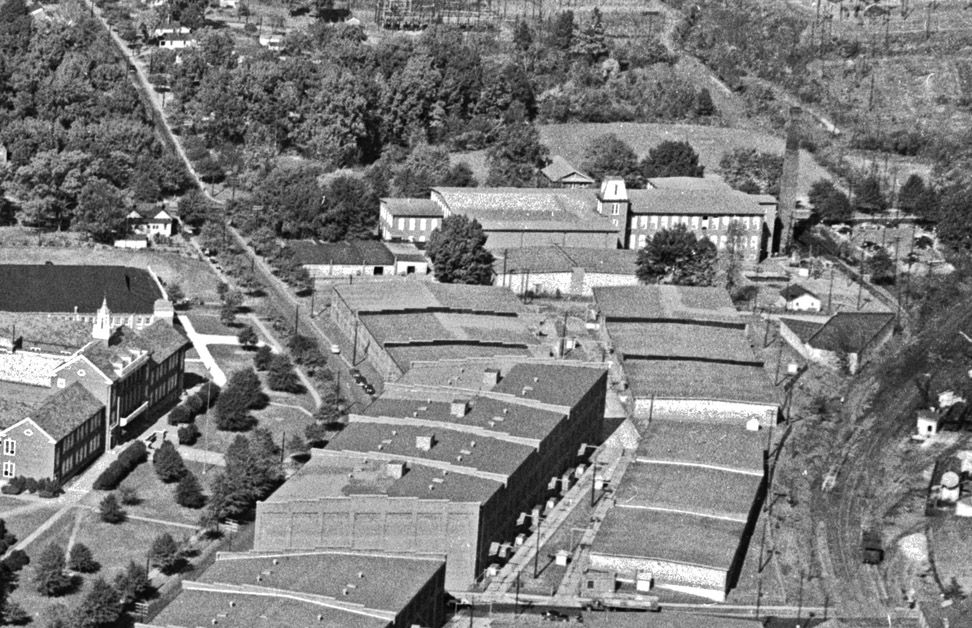 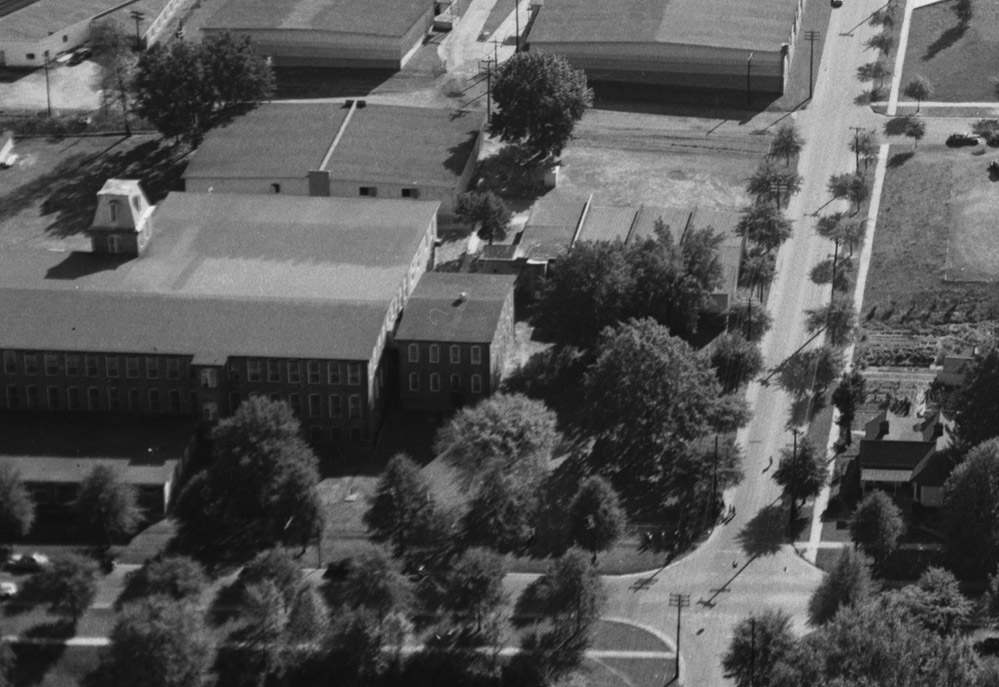 Looking south from ~ Trinity Ave. at a portion of the Pearl Mill, 1950s.
(Courtesy The Herald-Sun Newspaper

The mill was demolished in 1971 to build the Duke Tower apartments, geared towards the Duke diet facility (former YMCA) across W. Trinity Ave. In an odd bit of preservation, the builder decided to retain the original tower and smokestack, but nothing else. In place of the mill, the developer built some of the ugliest apartments in Durham. I can't really express how much I hate the mansard roof on the two-story 1970s apartment block.

At some point a few years ago, Frank Wittenberg bought this and decided to turn it into condominiums. No word on how successful or unsuccessful that venture has been, but this appears to still be a viable place to inhabit, unlike his efforts on the southerly portion of Duke St.

The nice folks who currently manage Duke Tower contacted me to let me know that Frank Wittenberg is no longer involved in the management of facility. Val Blettner and Lee Richardson own several of the units and manage the facility, which is now geared more towards extended-stay hotel guests (with some units still for sale.) They let me poke around in the old tower, which they plan to turn into a coffeeshop/breakfast joint. The 'attic' of the tower still contains a very large metal water storage 'container' (it takes up almost the entire 'attic') originally used to provide water for fire suppression. 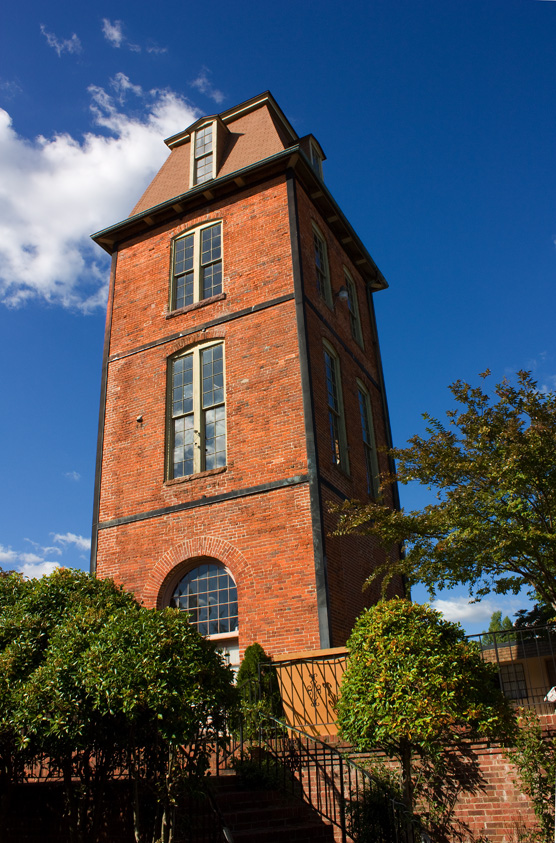 Residents have recently voted to restore the historic name of the property, now known as Pearl Mill Flats.

Fascinating - I'd always wondered what the story with that tower was. There is some more historical info here:
The Rich Heritage of Duke Tower Condominiums - they say "antique brick from the factory walls were used for all brickwork". The Photo Gallery has some nice tower photos too.

Here's a link with images of the eight mills of Erwin Cotton Mills. (Pearl Mill was No. 6)...

You're right, that is an ugly

You're right, that is an ugly building. And you are also right, there's no shortage of ugly apartment buildings around here. I wonder why that particular building bugs you so badly?

What do you think of the new Trinity Lofts around the corner?

It's gotta be the mansard

It's gotta be the mansard roof and the unusual inset dormers. It seems uglier since it has such a nice tower.

Anonymous has it right - it's

Anonymous has it right - it's the mansard roof with the small square inset windows atop the too-short brick base. Although I'm quite happy that they at least retained the tower and stack, mimicking the tower design - badly- is the big offense. I have to say that it probably has to do with the fact that, for some reason, when I was a kid growing up in New Orleans, all of the suburban apartment complexes built in the 60s and 70s looked sort of like this - with various combination of multi-colored/yellow/etc. brick with pebbledash driveways. Looking at Duke Tower gives me bad flashbacks.

Great post! One correction: it is Trinity Avenue Presbyterian Church (you left out the word Avenue). Thanks for your great work.
AR

I would live there, it has a

I would live there, it has a sturdy look, plus a slight charm about it.

As a kid I remember watching

As a kid I remember watching them tear down the mill from the Central YMCA. The 1971 date sounds correct as I would have been 8 years old. A bus would pick kids up from Parkwood and take us to the "Y" to spend our summer days swimming and doing other fun stuff.

My mother worked there and

My mother worked there and the original Irwin too. I remember being in the car picking her up from work once. The tower is what I always remembered. It was very distinctive to a five year old.