West Peabody Street
Durham
NC
Neighborhood
Downtown Central
Can you help?
You don't need to know everything, but do you know the year it was built?
Log in or register and you can edit this. 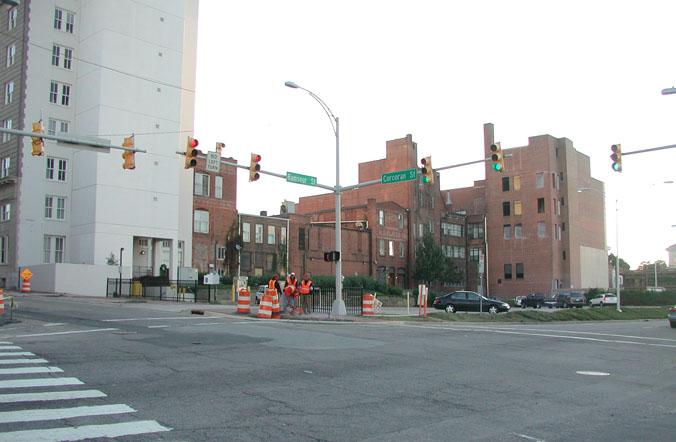 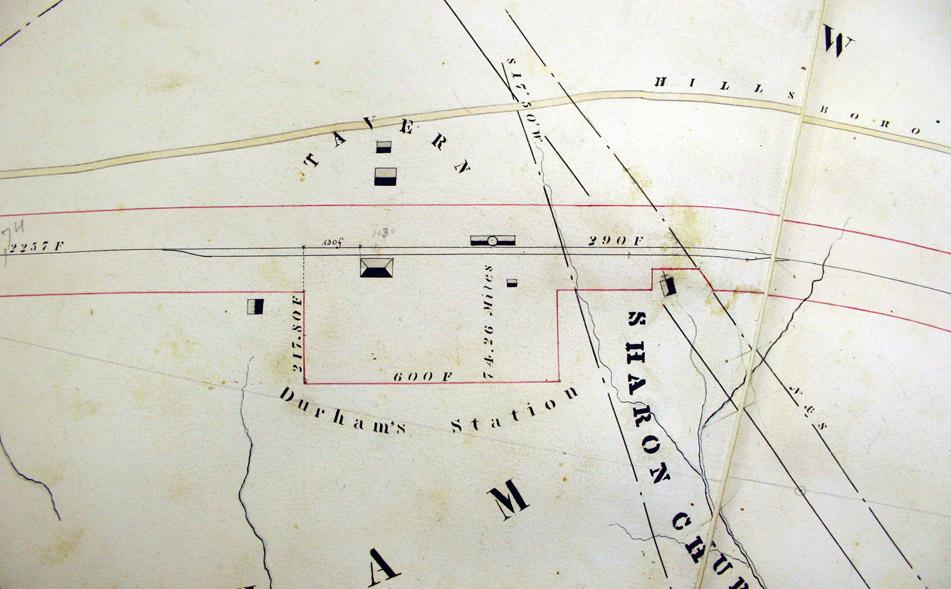 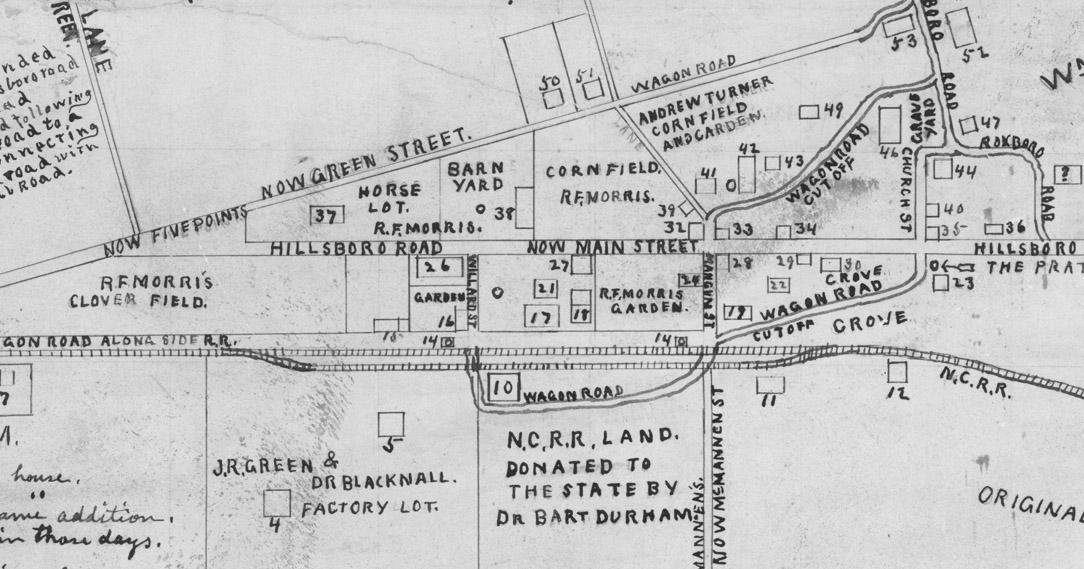 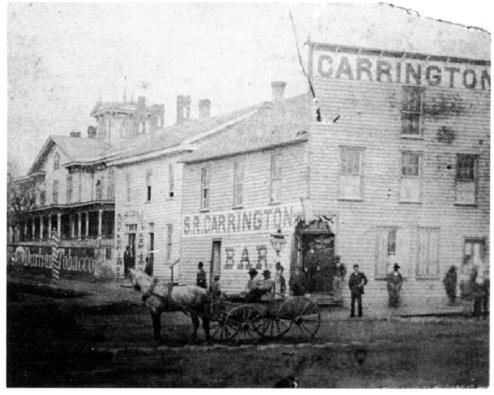 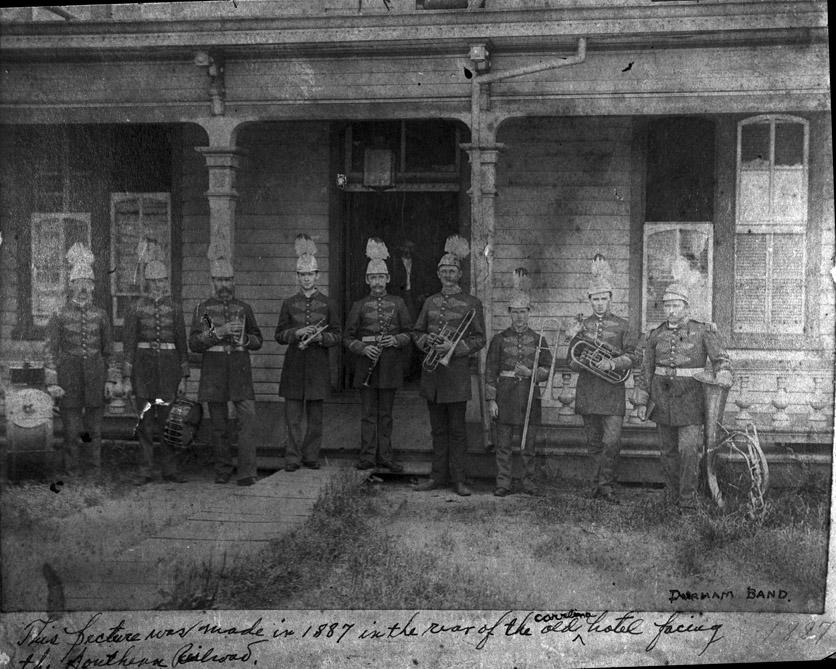 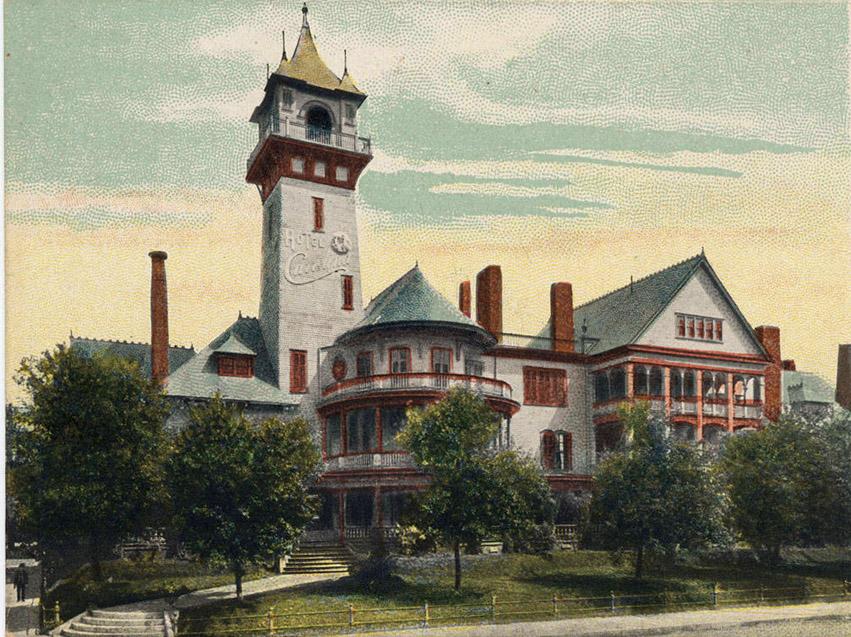 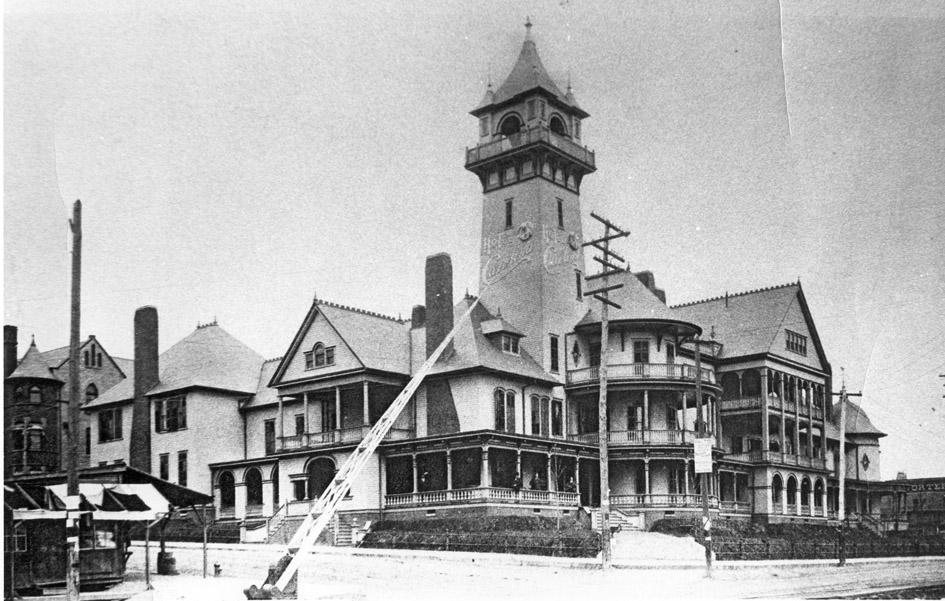 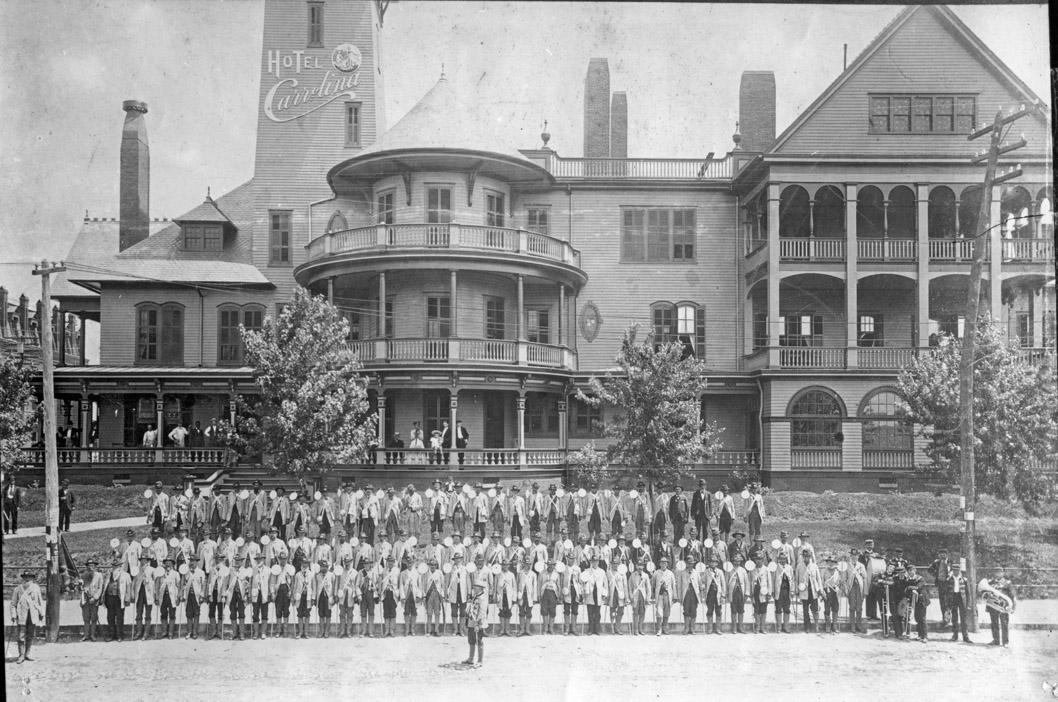 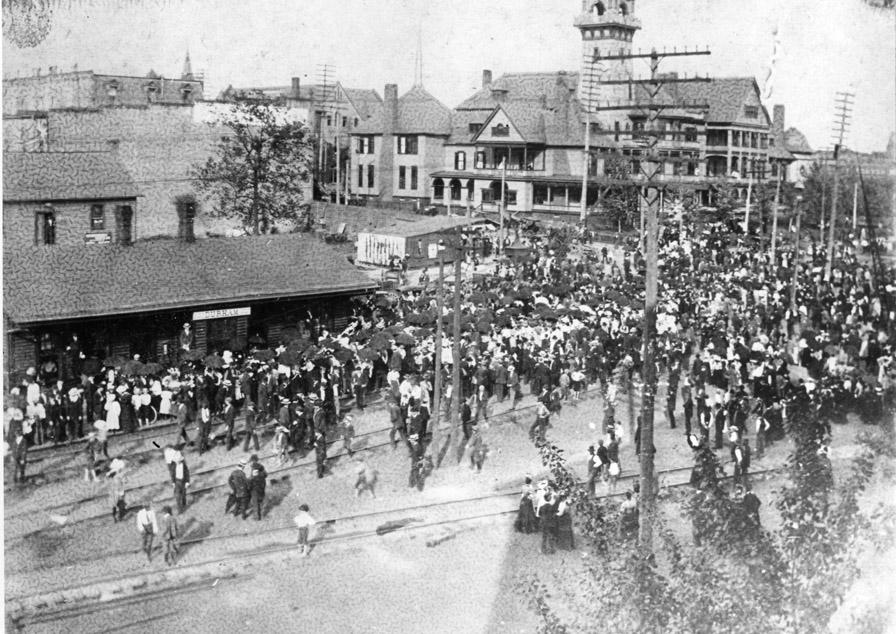 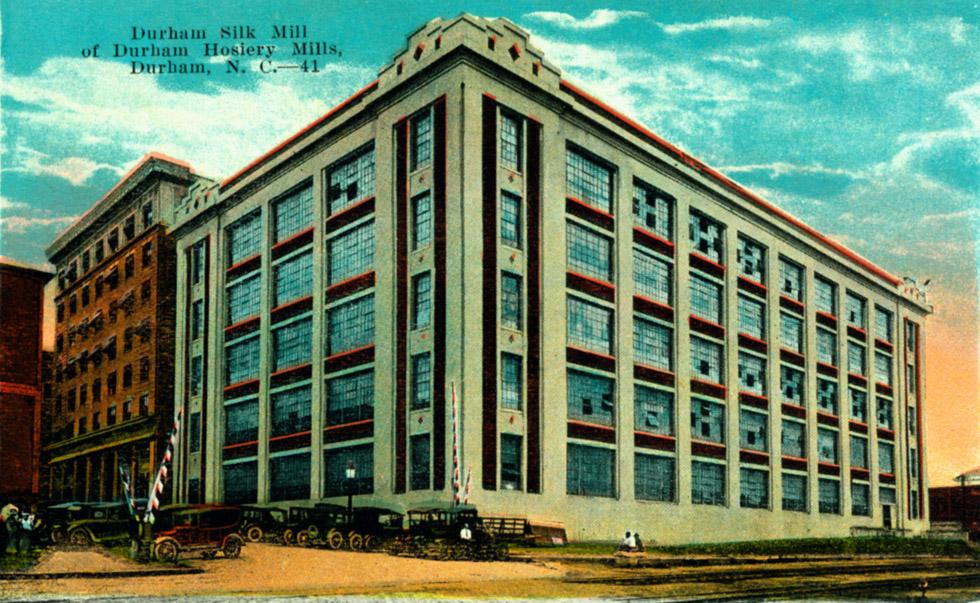 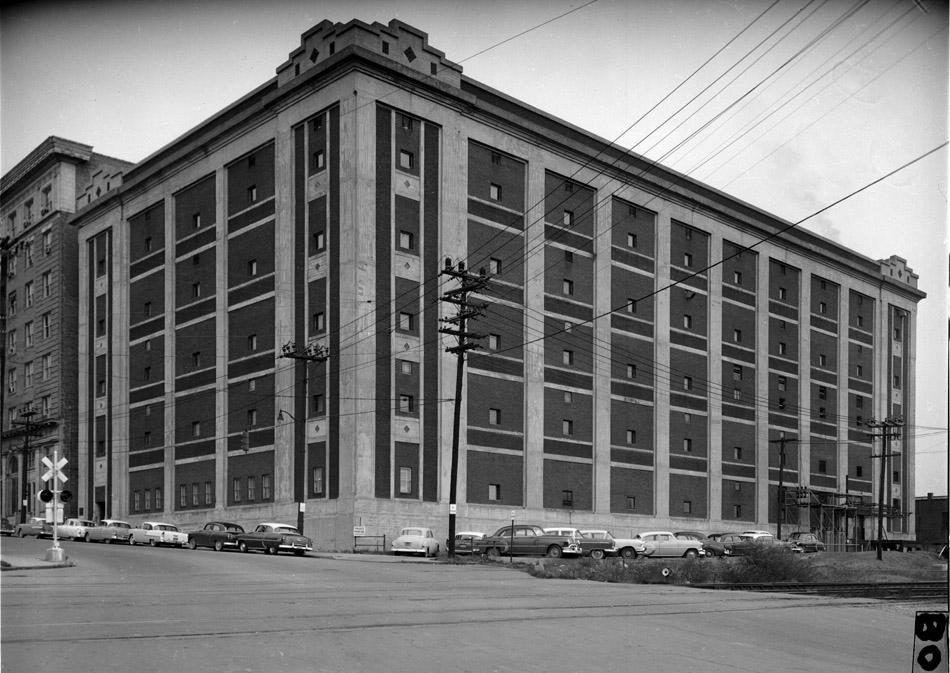 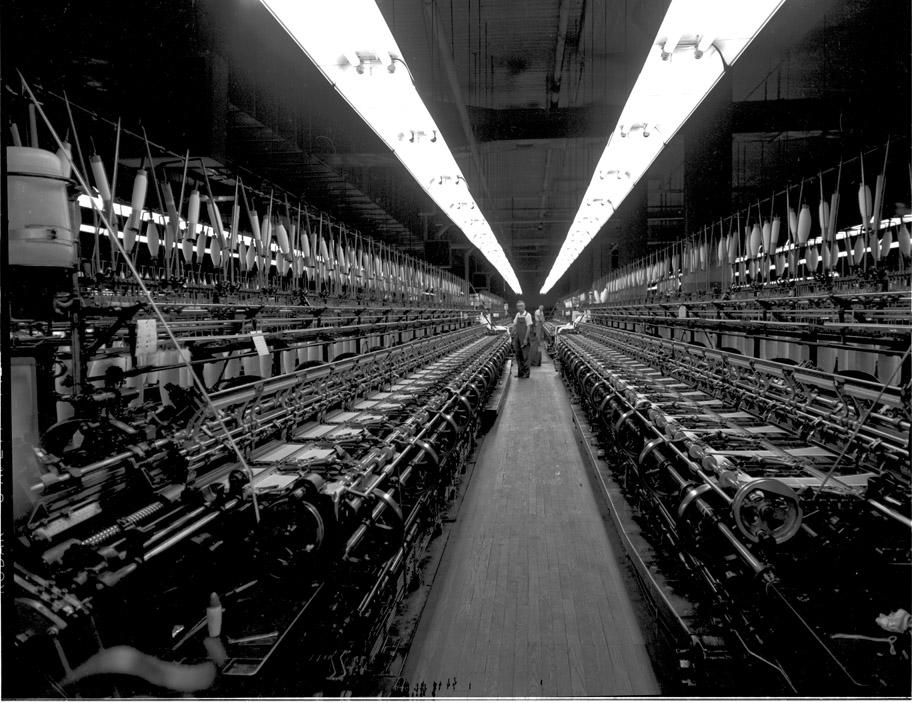 Knitting machinery, interior, 1950s. (Courtesy the Herald-Sun) I love the below picture: 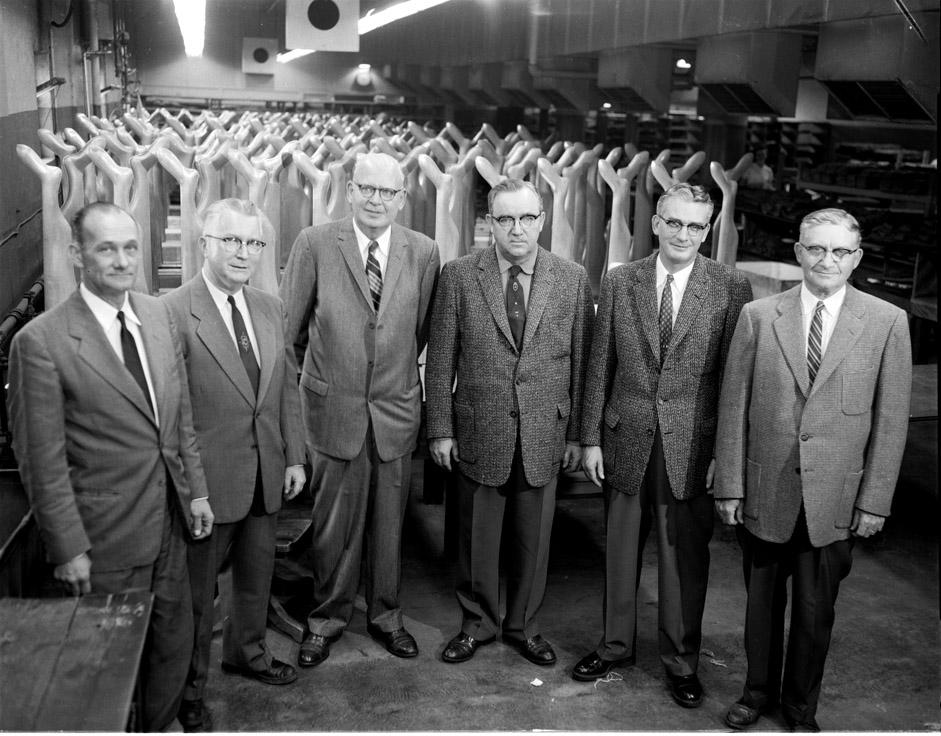 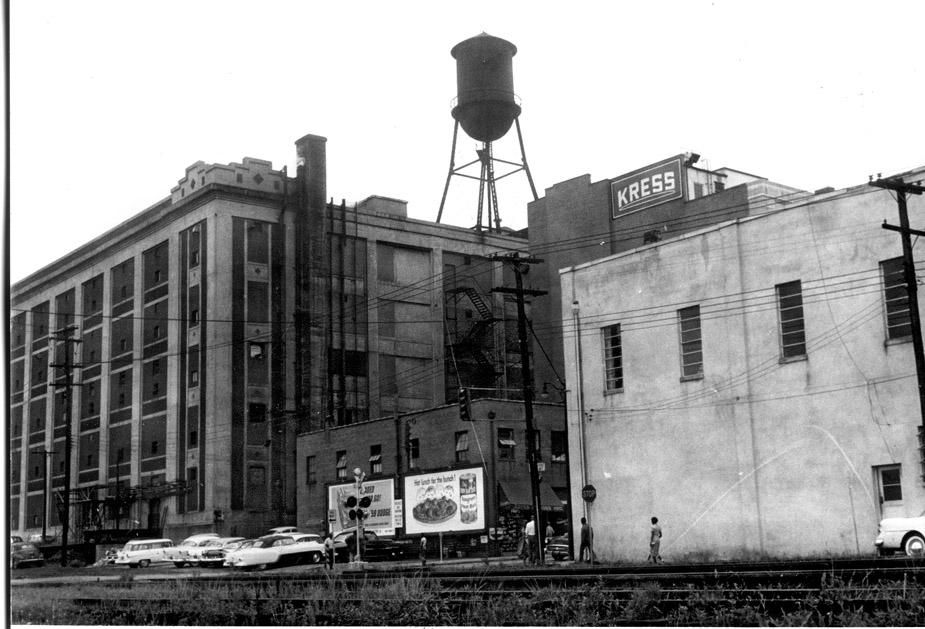 Looking west, 1959 (Courtesy Bob Blake.) The Durham Silk Hosiery mill operated until 1969, when the plant shut down. The building stood on this corner until 1970, when it was demolished. Evidently, the building was so well-built, implosion of the building was unsuccessful and followed up by wrecking-ball demolition. 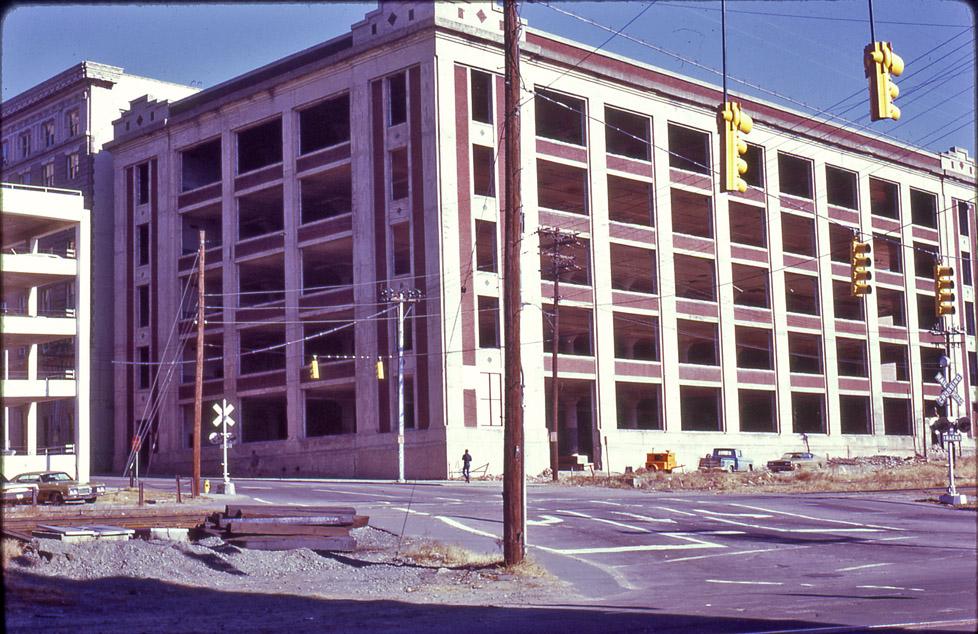 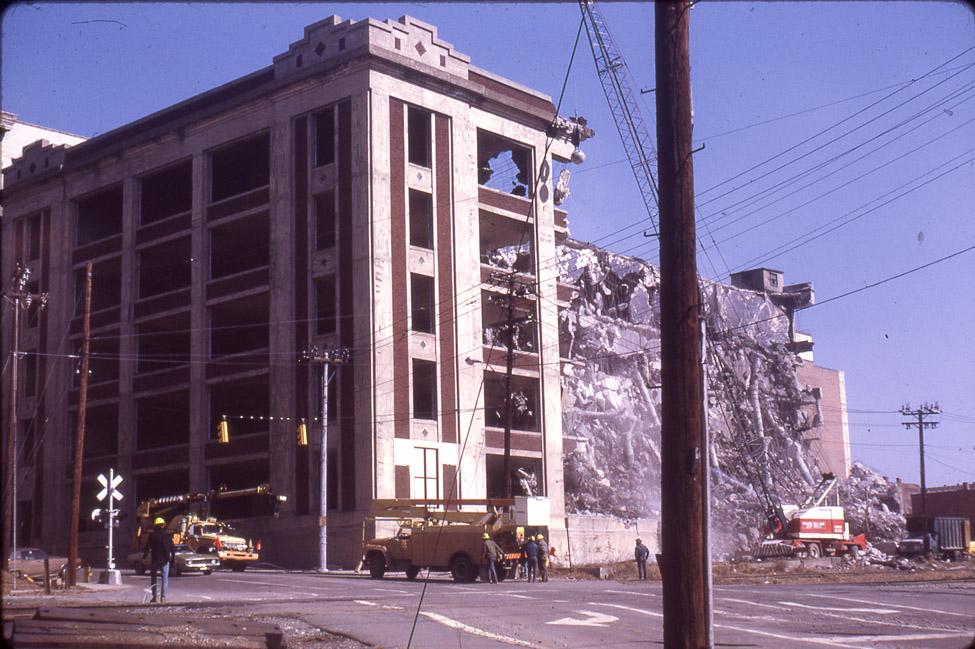 I've never seen a Queen Anne-type structure as large as the "Carrolina." The impression is different, somehow -- maybe because of size, or maybe not.

The building not imploding properly is funny as hell. It's like a metaphorical upturned middle finger at the demolishers. :) I was in Chicago this year, and took an architectural tour by boat (which I highly recommend; we took this one). One building we saw was originally for cold storage, very solidly built, and had no windows to speak of. It was renovated and turned into condos. According to the docent, it was so hard to put holes in the walls for new windows that they used a wrecking ball on the building, then finished out the windows by hand. The windows are all really small. I apologize for the head in this picture. Click on "Best fit for my screen" to get a better view. One can also double-click on the final picture to download a high-resolution version that's 2816x2112. BTW, I don't get any money from Tabblo. :)

Thanks for your comment and the link, Joe. I took the architectural boat tour in Chicago several years ago, and it was definitely a highlight.

I agree about the Hotel Carrolina - the amount of detail is amazing, but also somewhat overwhelming. Since it was oriented towards the railroad tracks, I wonder how it looked from a passenger train, approaching the station. Perhaps the outsized detail was designed to catch the eye from that perspective.

I think I've figured out the difference in appearance: At first I thought it was the oversized tower. But when I blocked out that feature with my finger, I realized that, despite the porches, secondary tower, and other detailing, the walls themselves are less irregular than in most Queen Anne structures I've seen. There are no bay windows; no funny vertical breaks in wall lines; no stories at different projections than the story above or below. The roofline from the north-looking view is also more regular than I'd expect; the right-hand half of the other view does show more irregularity, and a couple of hipped roof peaks, which apparently I've come to expect on wider Queen Anne structures (along with all those gables). All the pictures I have are much smaller buildings, though.

GK, thanks for this blog. You are putting these demolished structures in context to their present sites, something no one has done in Durham -- it makes me realize what's been lost and I don't know whether to laugh or cry. I thought gov't was suppose to be the stewards of public assets. If this is true, Durham is certainly a prime example of bad gov't -- or maybe just extreme apathy when financial incentive is missing. Anyway, this information is fascinating, thanks for making available. Keith Bowden

Keith - thanks so much for commenting and the positive feedback. Especially good to hear from a native. Glad that you find it interesting/informative; if you know of other people who grew up in Durham and you or they might be able/willing to provide some additional info/stories about buildings, please let me know.

The Carrolina is amazingly beautiful, and does look a little pieced together. Was the tower for bells?
BTW - how are you finding out all the background info in addition to the photos on these buildings?

The Carrolina does look somewhat pieced together, which fuels speculation that it incorporateed the earlier structures. There are a lot of common elements on all pieces, though.

My info comes from previously published books, information on photos, and past conversations.

When I read "Carrolina", I think about the lions in the Taco Bell "Carrrrne" Asada commercials.

This is terrible. I wonder if Carr looked anything like Ricardo Montalban?a

With regards to a commemorative plaque about this historical birthplace of Durham, there are two nearby. One is a Civil War marker in the shadow of the "Hit Bull Win Steak" sign along Blackwell Street. The second is in the lobby of the First National Bank, and is an honest-to-goodness historical plaque.

Still, whenever I lead tours around town, I love the effect of having folks peer over the side of the parking deck 4th story and asking them to view the cradle of our faire city -- a parking lot.

Funnier thing is, it sounds like the (nearly indestructible) hosiery mill could have been retrofitted as a parking deck, itself. With all the heavy mill machinery it had to hold, perhaps it was stronger than the Chapel Hill Street deck that is currently falling apart.

I believe the Spanish American War veterans in front of the Carrolina are actually Civil War veterans, Confederate (of course), with Gen'l Carr in front.

Lewis Blount's map has item 21, "Annex to hotel, known as "Pandora's Box," 4 rooms & attic, (logs)" in that block; might that be THE Pandora's Box? I thought PB was frame, but perhaps not.

What a fantastic structure the Carrolina was--the tower reminds me of a lighthouse for some reason. Too bad so many of the grand old frame Victorians were lost to fire, before they were even all that old. And the Hosiery mill building had its own charm, and the possibilities for repurposing could have been nearly endless--but not, evidently, in Durham. It does seem fitting that surface parking covers this historic spot, in light of the disproportionate importance it has been given elsewhere in this city.