3341
North Roxboro Road
Durham
NC
Year built
1935-1945
Year(s) modified
1960-1990
Construction type
Masonry
Neighborhood
Bragtown
Northern Durham
Use
Pawn Shop
Car Dealership
Building Type
Commercial
Can you help?
You don't need to know everything, but do you know the architect?
Log in or register and you can edit this. 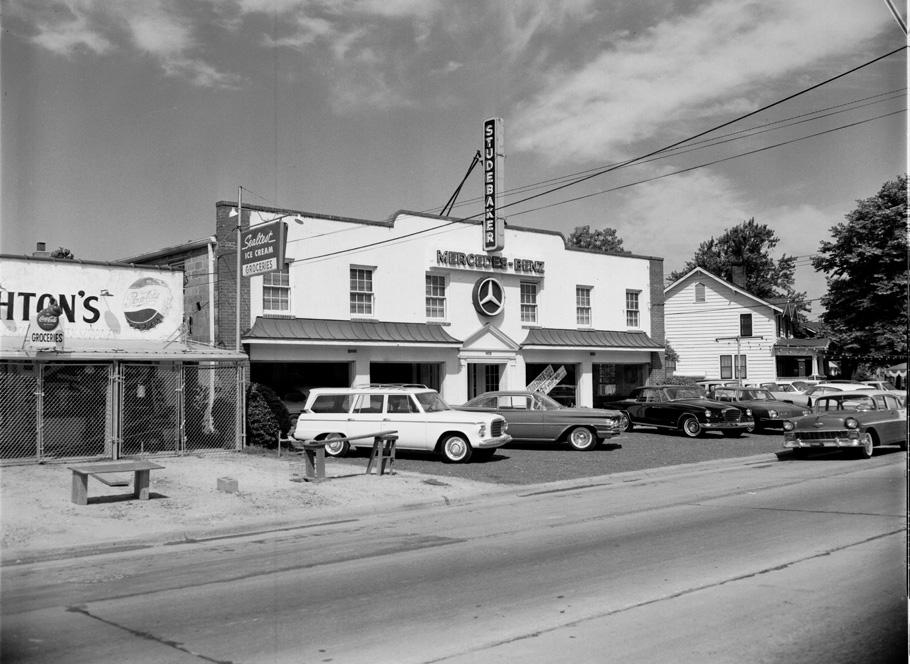 I know nothing about the Old Hickory Motor Company, but this shot from 06.13.63 gives the sense of a far different feel of this part of Bragtown in the mid-20th century than present-day 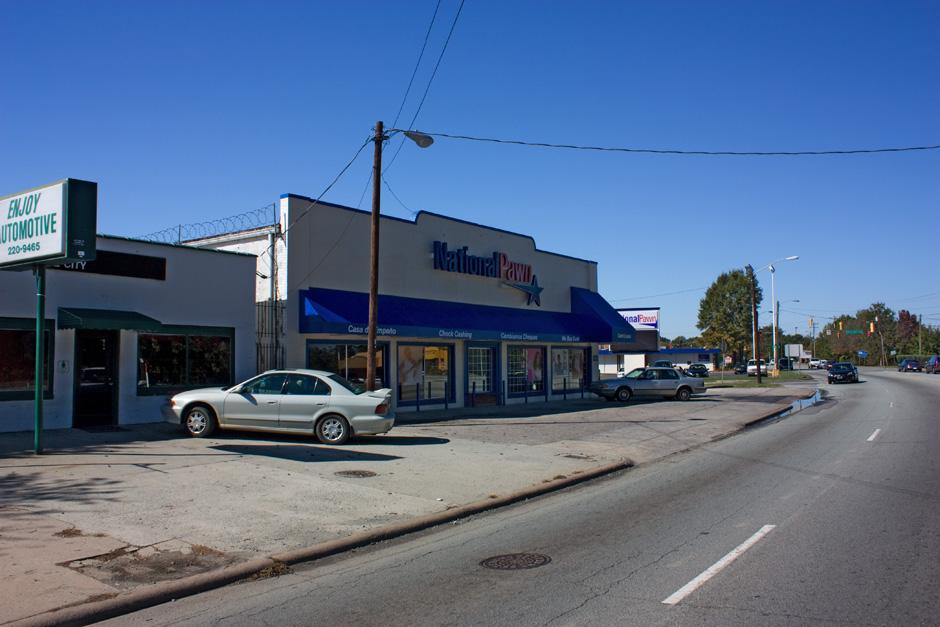 Why is it that, when "modernizing" a vintage building, any second-story windows MUST be obscured? I hate that. The rolled barbed-wire around the roof is another nice modern touch.

Really looking forward to seeing more of Bragtown, though!

Not sure when but Old Hickory Mercedes moved to 15-501 (where Sport Durst Lotus is now). It was there at least until the late 80's.

Old Hickory Motors also sold Mercedes, Packards, and of all cars, Edsels. It was owned and operated by John Emory.

It took me a few minutes to realize exactly where this was. I've got to say, it looks better now than it did in the late 70s. I always knew that space as Apple Automotive. I think my relatives kept them in business with their constant tinkering with old cars. Seems like I remember the upper story windows still being there in the 70s.

Gary, is that the entire photo, or did you have to crop it? I ask because I believe there was a radio (and later TV) repair place on the south end.

I notice on the Google link that Johnny's Country Store is still standing (as much as it ever was -- it's always leaned a little) but is closed. I realize it's not a historically significant structure by any means, but it sure was the social center of that neighborhood for many, many years. A lot of local history and tall tales were told in that store over a cold beer and a slice of cheese from the wheel kept on the counter.

And it looks like all but one of the bungalows across from it have been bladed. Hopefully someone salvaged the hardwood floors. At least two of the houses had been used for various retail in the late 70s -- The Pampered Pooch was in one of them for a while, then I think the other was a antique store. Some of my relatives lived on that block in the 1920s, including the guy who was locksmith for S. E. Rochelle. There were said to be unmarked gravesites in the back of those lots.

Also looks like there is a school of some kind next to Braggtown Baptist where there used to be an ice cream stand.

OK, I'm rambling. :) I'm really looking forward to seeing what you have on the County Home!

"Devil" is correct - Old Hickory Motors was established by my late uncle, John Henry Emory, who grew up on South Driver Avenue in Durham.

In addition to Mercedes, Packards, Edsels, and Studebakers (note the great old Avanti in the photo), he also sold Sunbeams - Alpines and Tigers.

During WWII, Mr. Emory served with distinction as a soldier with the 30th Division, which was known as the "Old Hickory". His personal decorations included the Silver Star Medal; the Bronze Star Medal with Valor device; the Purple Heart Medal, and the Combat Infantryman's Badge.

It was because of his service in the European Theater of Operations (ETO) that he became interested in Mercedes-Benz automobiles, and ultimately became a dealer.

Old Hickory went on to sell Toyotas. They eventually moved out 15-501 next to Coggin Pontiac and a furniture store named Rhodes. A man named Mark Jacobson eventually came in and bought Old Hickory, changing the name to Mark Jacobson Toyota.

The school referred to next to Bragtown Baptist Church is The Wright School. It is for developmentally challenged students.

Old Hickory Motors was directly accross Roxboro Road from Belvin's Grocery.  The store on the left of Old Hickory was Broughton's Store.  It was one of the original convenient type stores that sold a limited number of things due to the size. It was often frequented by school children going and coming from Bragtown School.  It was a great place to buy a large nickel size Babe Ruth candy bar and a R.C. Cola.  Mr. Broughton lived on Edgewood Drive.  Mrs. Broughton was a school teacher at Bragtown School.  They had two children that I can remember,  Charles and Janet.

Dang, the difference from now and that top picture is crazy, my parents laugh at me for this but I hate parking lots. They mess up everything and suck the life out of everything around it.

When Old Hickory Toyota was out on the bypass, it was owned by John McCurley, who recently passed away. I think Jacobsen bought the dealership from him. I believe McCurley was originally from the Chicago area.