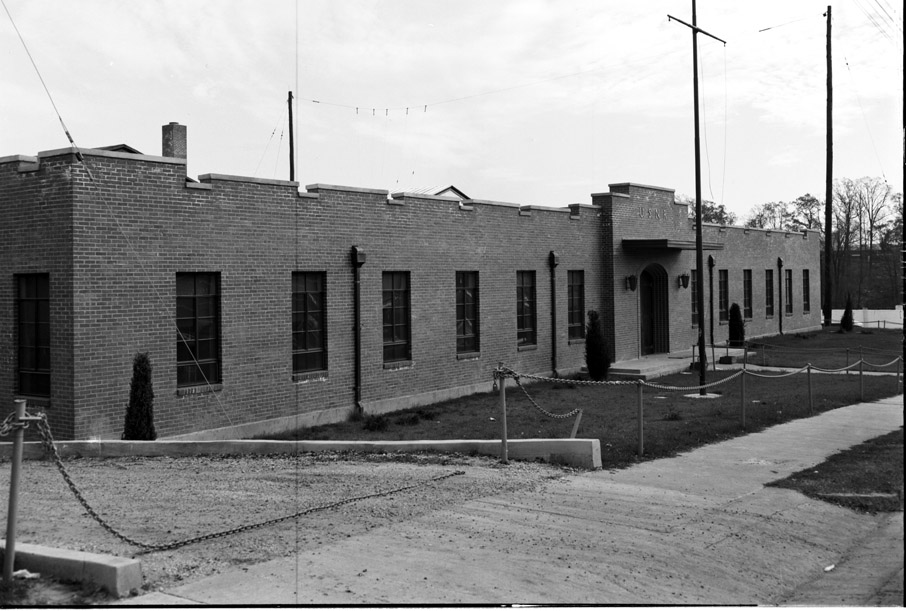 The Naval Reserve Station was built around 1947-8 near Trinity Ave. and Foster St., an area that had been largely undeveloped prior to the 1930s-40s. Initially, the building was a single story structure with a crenelated roofline. 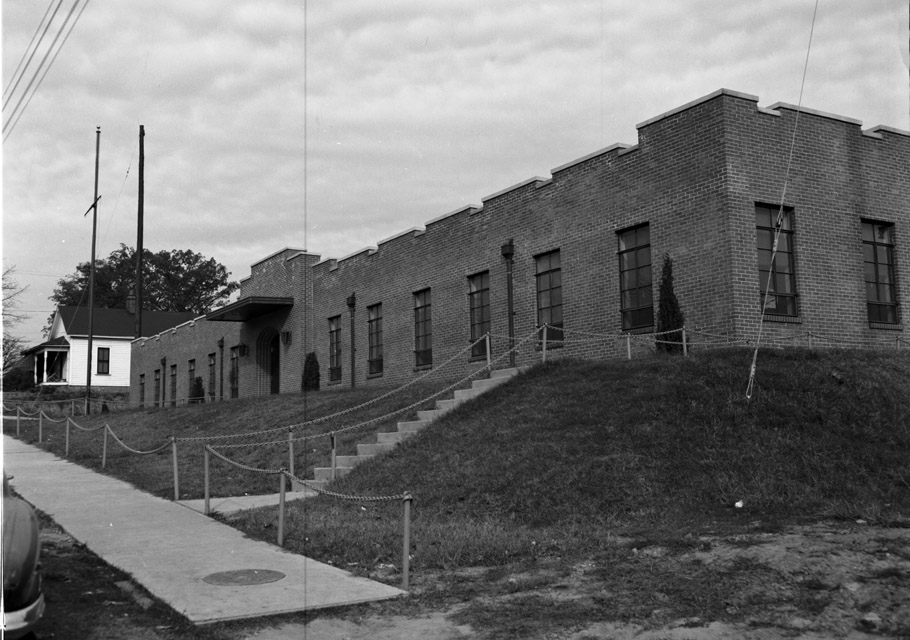 It boasted a full set of training facilities inside. 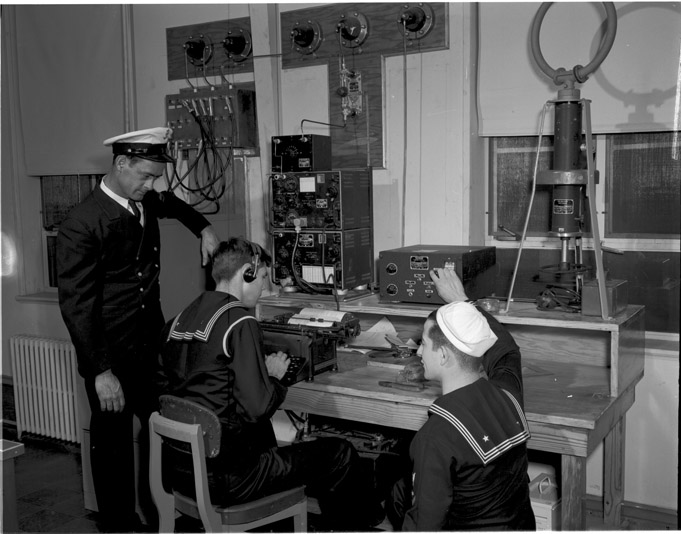 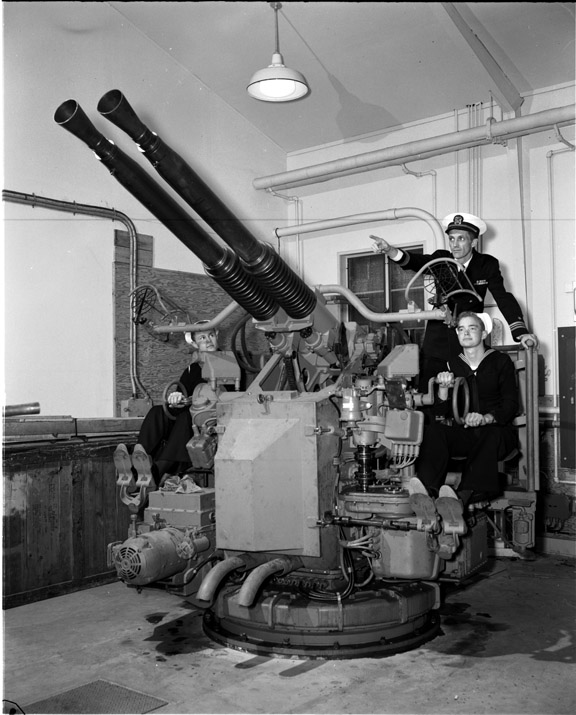 A big gun in a small room, 1948.
(Courtesy The Herald-Sun Newspaper)

By the mid-1950s, the building had been renovated to a more mid-century modern style and expanded with a second story and a rear wing. 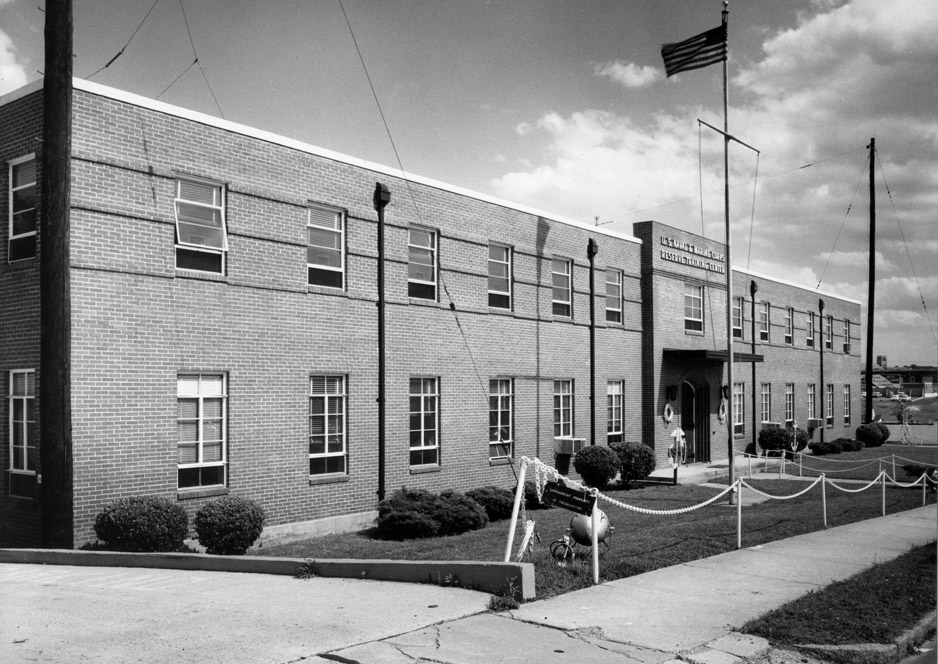 Looking northeast from near Geer and Foster Sts., 08.03.61
(Courtesy The Herald-Sun Newspaper)

In 1970, the structure became the Army Reserve Center, when that concern expanded northward from 313 Foster St.

I'm not sure when it stopped functioning as an army reserve station, but in 2003 it opened as a charter school, The Central Park School for Children.

You can also notice the sign for Old North Durham Park on the right - one of central Durham's more hidden parks - it's essentially a really big field that takes up the entire center of a large block. It's amazing to be out there on some weekends when there is a strong showing of the Latino community, 3-4 soccer games (various ages) in progress, spectators along the sides.

From the 2013 National Register listing:

The steel frame building with brick veneer was [originally] one story tall, with an arched center entrance on the west façade, flanked by six bays of metal casement windows and two original rear wings. By the mid-1950s it had been raised to two stories. The upper story is also brick veneered, its long expanse relieved by three brick string courses between the windows, which were metal awning types.

The large, utilitarian building features brick veneer laid in running bond, with a center front double glass door set within a segmental arch of stepped brick that contributed, along with the original crenellated roofline, to an "armory" architectural style. When the second story was added, the crenellations disappeared. All of the windows have been replaced with one-over-one metal sashes. The main entrance is set within a recessed, corbelled, segmental-arch opening and sheltered by a flat metal canopy. The interior contains a hallway that extends the width of the building, with rooms opening to the front and rear. To the rear along the south is a ten-bay-deep two-story brick wing; an equally-long one-story brick wing extends from the north end of the rear elevation. Each wing has a center hall and double-loaded rooms. Directly behind the hallway, located centrally, is a large auditorium set between the original wings. Between the auditorium and rear wings are narrow corridors open to the air.

When the charter school opened, the interior was retrofitted with linoleum floors, dropped accoustical tile ceilings, and replacement windows. A number of the classroom doors are original glazed and paneled doors. Approximately 300 children attend kindergarten to fifth grades in this building, which has a small playground behind the building and also utilizes the large playground behind the school that was originally the grounds of the North Durham Elementary School located on North Street. The building retains its architectural integrity from about 1955, when it was raised to two stories, and the replacement windows and doors are the only significant exterior change since that time. Although adaptively reused as a school, it still conveys its original character as a U. S. Naval Reserve Training Center, thus it is a contributing resource.

Steve Baskin of Revival trim and Finish (http://www.revivaltrimandfinish.net) worked on the adaptive reuse project in 2003; he may know some of the history of the building.

If you get into OND park on

If you get into OND park on weekend mornings, its completely empty, and a great place to run your pup! pretty much only one entrance to monitor!

afternoons are an amazing sight! with all the soccer teams going at it!

The view to the northeast is

The view to the northeast is from the corner where Uzzle Cadillac Olds was at the time, and the smiling lady there is Mrs. Martha Uzzle who still lives in Durham.

I know it was a Naval Reserve

I know it was a Naval Reserve station in June of 1969 when I raised my hand the same day as my graduation from Duke. Anything to avoid being a "ground pounder" in Vietnam. The Navy eventually sent me to San Diego which is now home so it wasn't all that bad!

Martha Uzzle is standing in

Martha Uzzle is standing in the lot of U & O ESSO, which was run jointly by Uzzle Motor Co and Carl Oakley for many years !

We compiled this list of "important dates" when we were working on the building (I think they came out of the Army's move-out report, but I was unable to find a copy of it to confirm when I went back to look):

1928: constructed as a public school

1950: additional training rooms, assembly area constructed - this could either mean all three of the "wings" on the back of the building that stretch to the east from the main two-story block along Foster, or that just the final, center, "assembly" wing was added at this point (the current shape of the overall floorplan is an "E"). All three of the East/West wings seem to be later additions to the main North/South block along Foster Street, as the construction type and second floor levels are different. Also, at some point along the way a second story was added to the south wing.

Thanks for the additional info; the only thing I'd question would be the 1928 "constructed as a public school." The building does not appear on the 1937 Sanborn map (it's just an empty space with some small houses on Geer.) I wonder if there is some conflation between this and the addition to the North Durham School at the other end of the current Old North Durham park.

Thanks for double-checking against the Sanborns - like I said, I couldn't find the document that those dates came out of (and therefore really can't vouch for the accuracy).

plus, it was a Navy Reserve

plus, it was a Navy Reserve center, not Army...

I always thought of it as the

I always thought of it as the Army Reserve Center, and I'm pretty sure that was what it said on the building in 2000 when I moved into the neighborhood.

A check of the city

A check of the city directories shows that it became the Army Reserve center in 1970.

A group called the Friends of

A group called the Friends of Old North Durham Park has prepared a proposal for a private/public renovation of the park:

I posted some information about the proposal here: