Guess Road
Durham
NC
Neighborhood
Northern Durham
Use
School
Building Type
School
Can you help?
You don't need to know everything, but do you know the year it was built?
Log in or register and you can edit this.

"That EW Warren and JR Turnage, in consideration of one dollar to them paid by the said County BOard of Education, the receipt of which is hereby acknowledged, have bargained and sold... a tract or parcel of land ... adjoining the lands of William Terry, said Warren and Turnage, and the old Milton Hill school site and others, bounded as follorws, vis:

A subscription school, Milton Hill on Milton Road, was fondly remembered by Mary Lucy Russell Harris, who began her schooling there at five years of age. Milton Hill was a one-room log structure with a huge fireplace at each end: The teacher sat (when she sat) in a chair in one corner near the fire. The opposite corner was filled with wood and those boys who chewed tobacco sat on top of the wood so they could spit in the fire. . . . There was a long window reaching across one side of the room. Underneath the window was a sloping desk and underneath that a bench. This was the writing desk! A dozen boys and girls could sit there and write in their copy books. On a small shelf by the door was a water bucket and dipper. . . . We had no desks but plenty of benches and children. I'd say that on rainy days when the boys couldn't work in the fields there must have been sixty of us. 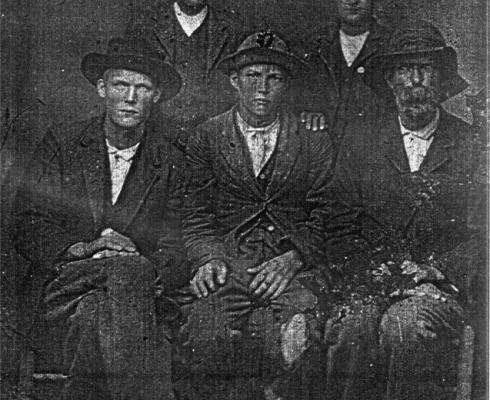 [Many thanks to Peter Kramer for lending his collection of material about the Terry family, and both him and Terry Mangum for answering my copious questions.] James T. Terry was born in 1801, the son of James Terry, Sr. (II), and Sarah Thorpe. In 1848 James T. Terry acquired 260.5 acres on Little River adjoining the land of William Cain, the...
Read More