1010
West Markham Avenue
Durham
NC
Year built
1923
Architectural style
Dutch Colonial
Construction type
Frame
National Register
Trinity Park
Neighborhood
Trinity Park
Use
Residence
Building Type
Residential
Can you help?
You don't need to know everything, but do you know the architect?
Log in or register and you can edit this. 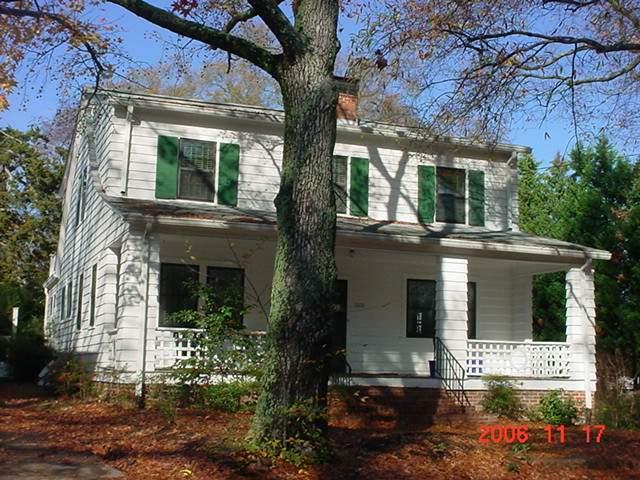 In 1903 the farm of J. M. Markham was plotted into 75-85 foot residential lots north of Urban Avenue, between Ellerbee Creek and Buchanan Boulevard.  These lots would eventually be sold – some 20 years later – and developed into 50 foot lots making up what is now the 800, 900 and 1000 blocks of Markham Avenue, and contiguous lots facing Urban and Green Streets.  Originally Markham Avenue dead-ended at Watts Street.  It was not until the 1940’s that the street was cut through, with lanes divided to go around a large tree between Watts and Buchanan (then called 1st Street).

In 1923 John M. Markham sold two 50 foot lots, 1008 and 1010 Markham Avenue, to Grover Vance Massey and his wife Addie Upchurch Massey.  The US Census of 1920 records the Masseys as being 31 years old, owning their own home on Broadway Street in Durham, and having no children.

The first year the Masseys lived on Markham (1924), they had only two neighbors on the block.  Mrs. Bessie S. Pickard (later Boone) lived immediately to the west - at 1012 – and J. L. Sally is listed across the street at 1019.  Both houses had been first listed the previous year, 1923.  Mrs. Pickard taught school at Watts Street and North Durham Schools.  Sally was a local builder (who probably did not live in the house) and sold 1012 to Walter E. Page of Page Motor Company the following year.  (Sally also owned 1006 Markham before it was sold to its first occupant in 1927.)

A second person is listed as living at 1010 Markham with the Masseys: Susan Link.  The asterisk next to her name indicates that she was black, evidently a live-in maid.  At 1019 Markham J. H. Wilson, “shoe shiner” also African-American, shared a listing with Mr. Page.

In 1928 the Masseys left 1010 Markham for 1107 N. Duke Street (and for 1202 N Gregson in 1930) but continued to own the property until 1937.  (Mrs. Massey died in 1934.)  During this time he sold the vacant 1008 lot but it was never developed.  He evidently rented the home to Margaret and H Faison Peirce (President of Industrial Supply Corp.) for four years and then to Estelle and J. Clarence Crutchfield (salesman for Durham Public Service Co. – city bus transportation) for six years.  Mr. Massey died in 1959.

The second owner of the house at 1010 Markham was Reverend Stanley C. Harrell and his wife Alberta Boone Harrell who purchased the property in 1937.  That year Harrell was a pastor at Main Street Christian Church located at 813 W Main Street.  In 1939 he purchased the vacant 1008 lot.  His grave marker notes: he served the Congregational Christian Church for 35 years; was a Chaplain in World War I and editor of the Christian Statesman. The 1956 city directory (the year of his death) lists him as being the editor of the Christian Sun and living at 1507 Oakland Avenue.

The Harrells lived here with a single daughter, Mary Ann.  Mrs. Harrell lived on Buchanan Boulevard when she died in 1986.

The Harrels made major improvements to the house in the late 1940’s.  They added a second full bath upstairs.  (The lavatory is stamped as being manufactured in 1949.)  I believe (based on style of cabinetry, foundation brick) they added the back utility room and significantly remodeled the kitchen at that time as well.  The Sanborn maps now at the Public Library were last updated in 1950 and don’t show the addition, supporting the 1949 date.  Long-time neighbor Mary Ellen Luikart remembers the upstairs improvements being made for the daughter.  She remembers taking a tour and walking out from Mary Ann’s bedroom onto the roof of the utility room.

I believe (based on notches in the door frame) that the existing kitchen to utility room door was the original back door, re-hinged to swing out.  For the record, during the 1986 renovation a chimney with a plate-covered opening to the flue was discovered in the north wall of the kitchen at the west corner.  Also, there was a water pipe that originally went up to what must have been a wall-hung lavatory on the west wall of the back bedroom.  (Perhaps for use by Susan Link?)

(Years ago I saw an insurance map which outlined the existing utility room with a box labeled “ice box.”  I’m puzzled now as to where I saw the later drawing.)

In 1955 the Harrells sold the eastern half (25 ft) of the 1008 lot to the Carpenters next door.  That same day they transferred the title of their home, with 75 foot frontage, to Fred H. and Gracetta Hills.  The Hills family lived at 1010 Markham for 29 years and they also had one daughter, Susan.  Mr. Hills worked for Durham Telephone Co., first as assistant secretary and eventually as controller.  He retired with the company that would become GTE.

Mr. Hills died in 1984 and his widow sold the house that same year to the current owners.  Mrs. Hills moved to a retirement community in Tarrboro, and died in 2002.

Larry and Lee Ann Tilley, with the help of their family’s business, Acme Plumbing & Heating Co., are responsible for further remodeling the kitchen and upgrading bathroom fixtures and the mechanical systems.  The original wall between the galley kitchen and a small butlers’ pantry was removed and a back doorway was added from the kitchen to a new back deck.  Central air-conditioning was added.  In 2000 a two-car garage with upstairs playroom was built in the generous side yard.

Mr. Tilley’s father, “Dub” Tilley, has fond memories of playing with “Buck” Carpenter who lived next door.  They used to roller skate around the large apple tree that was in the circle at the top of the hill, before Markham turned into the major thoroughfare that it is today. 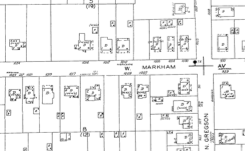 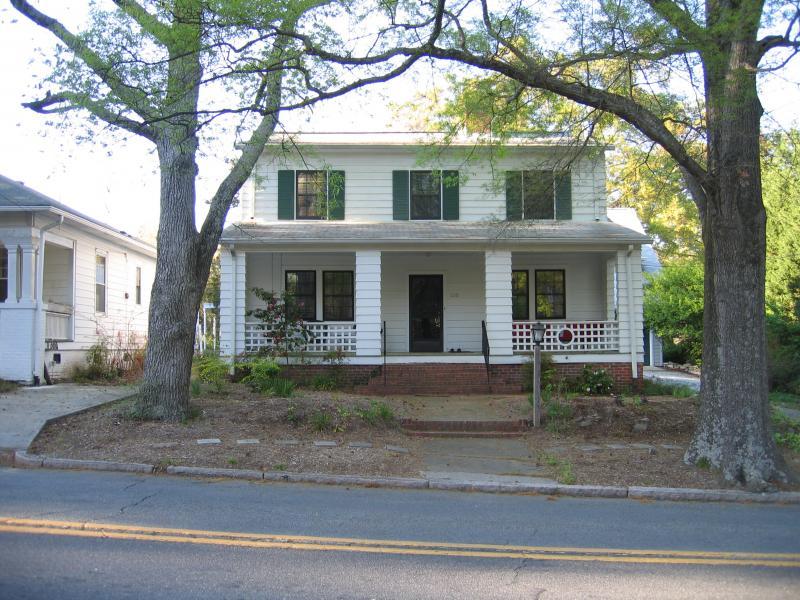 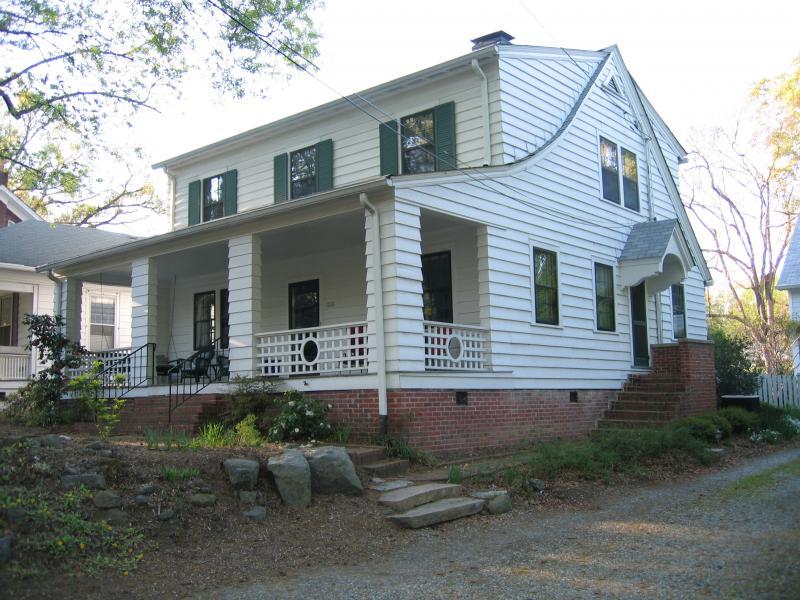 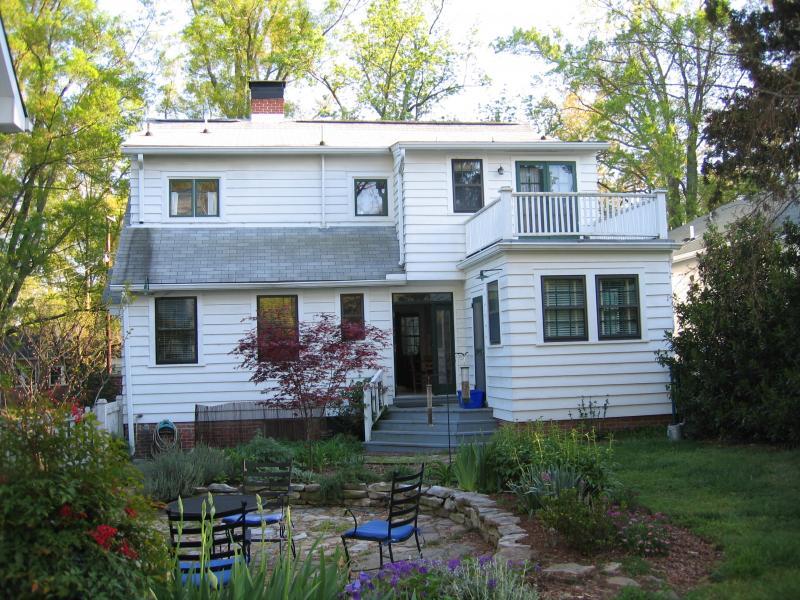 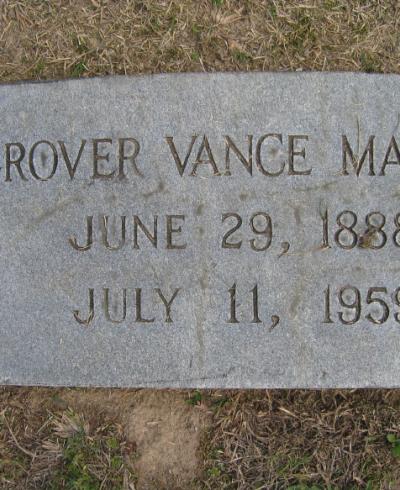 In 1923 John M. Markham sold two 50 foot lots, 1008 and 1010 West Markham Avenue, to Grover Vance Massey and his wife Addie Upchurch Massey. The US Census of 1920 records the Masseys as being 31 years old, owning their own home on Broadway Street in Durham, and having no children. According to Durham City Directories, G Vance Massey worked at...
Read More

Great research Lee Ann.  G. Vance and Addie Massey lived in our house (1202 N. Gregson) from 1929 until his wife's death.  Architect George Hackney then lived here briefly with Mr. Massey in 1934, and the house was sold to Lena B. Hall in 1935.

Massey Feed Company must have been rather short lived, as my research showed that Mr. Massey worked as a special agent for Banker's Life Company at 212 West Main (The Trust Building) during the early 1930's, and as a salesman for Carolina Neon Signs Inc. in 1932.

Rob - if you were interested in adding your house, you could link the houses together with the 'person entry' for Grover Massey.

Gary and Rob, I have entered our friend Grover but I find that I cannot add Rob's information into the text I originally posted.  Am I right that I cannot edit my own person entry?  Lee Ann

It appears not. I've changed your permissions to 'volunteer', which should let you do that - as a workaround until I can get the revisioning stuff to work properly so that you can edit your own entries as a 'regular' user.