The house at 508 (previously 408) Fayetteville St. was likely built in the 1890s. Its origins are unclear, but my pure speculation is that it may have been built as a parsonage for White Rock Baptist. Addresses become very difficult to trace prior to ~1905, but by 1907, it was the home of the James E. Shepard family. Shepard was born in Raleigh in 1875, the son of Raleigh Minister Augustus Shepard, and educated at Shaw University where he received a pharmacy degree. Augustus Shepard brought the family to Durham when he accepted the pastorate at White Rock Baptist Church. James became a minister as well, and traveled throughout Europe with the International Sunday School Association.

Shepard became one the original organizers of the North Carolina Mutual Life Insurance Co., but when the company was reorganized in 1899, broke away with WG Pearson and to form a competitor, the Carolina Mutual Life Insurance Comapny, in 1903. Carolina Mutual originally had its home office in Raleigh, but in 1905 moved it to Durham. It appears to have been in business only a short while. Shepard was involved in many of the same endeavors as the other members of Durham's African-American elite - a prinicpal in the Bull City Drug Company, the Fitzgerald Drug Co.

In 1908, Shepard put together the prospectus for the National Religious Training School and Chautauqua, the predecessor of present-day North Carolina Central University. After a successful fundraising effort, the school opened its doors in July 1910 with Shepard as president. By 1915, he had moved to a frame house on the campus, and in 1923 moved to the house still located at 1902 Fayetteville St.

By 1923, the house at 508 Fayetteville was occupied by Reverend James Kirkland, the pastor at White Rock Baptist Church.By the mid 1930s, the house had become the African-American YWCA. The segregated YWCA facility for white women was located on West Chapel Hill St.

The YWCA occupied the hosue until 1939, when the building became the first home of the institution later known as the John Avery Boys Club (now Boys and Girls Club.) Per the institution's website, in March, 1939, Mamie Dowd Walker, a judge in the Durham Juvenile Court (and perhaps the first woman to Durham to own a bicycle, requested that Durham Committee on Negro Affairs address problems of juvenile delinquency. On May 13, 1939, a temporary organization of the Boys Club was formed. On April 6, 1940, the name of the organization was changed to "John Avery Boys Club" In 1944, it became a member of the Boys Clubs of America. 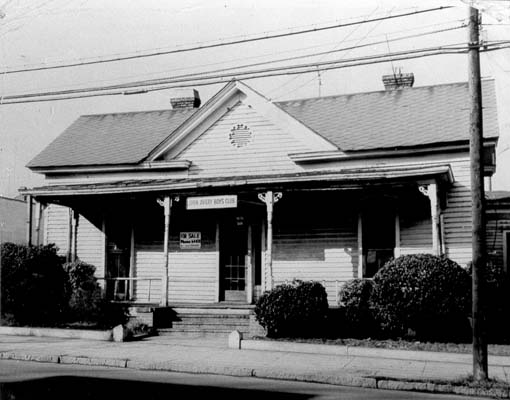 508 Fayetteville, 1940s. Although typical in some ways, the building had some unusual architectural features for Durham, particularly the full-height front porch windows that extended to the porch floor - combined with the pedimented door and window casings.
(Courtesy Durham County Library / North Carolina Collection)

A new building for the John Avery Boys Club was built at 506 Branch Street between 1955 and 1957. It appears that the house was abandoned at that point. 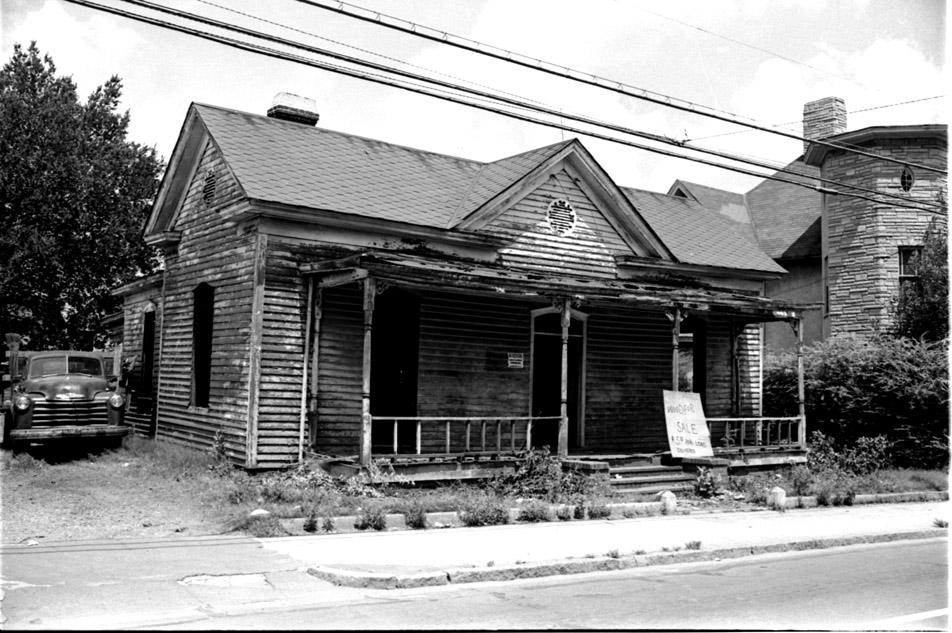 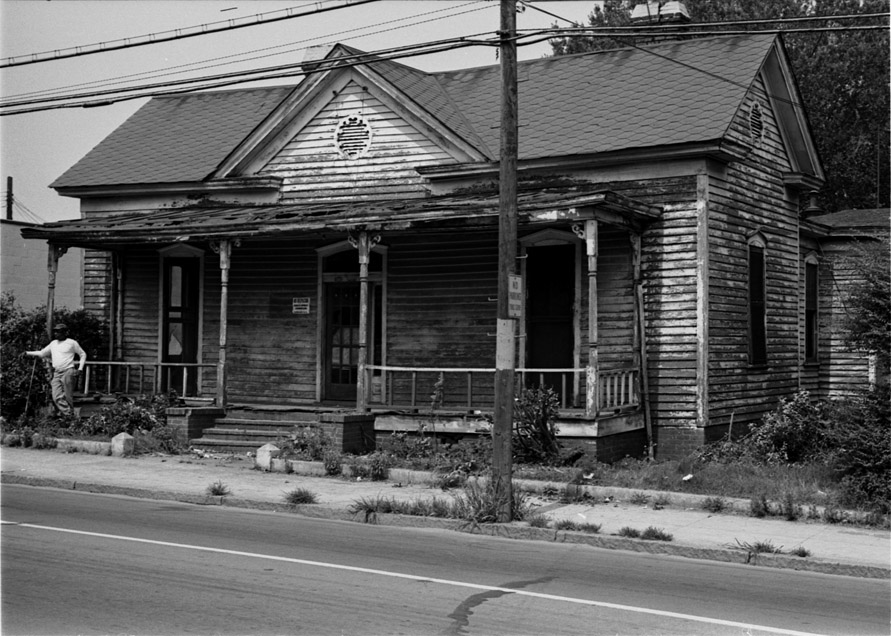 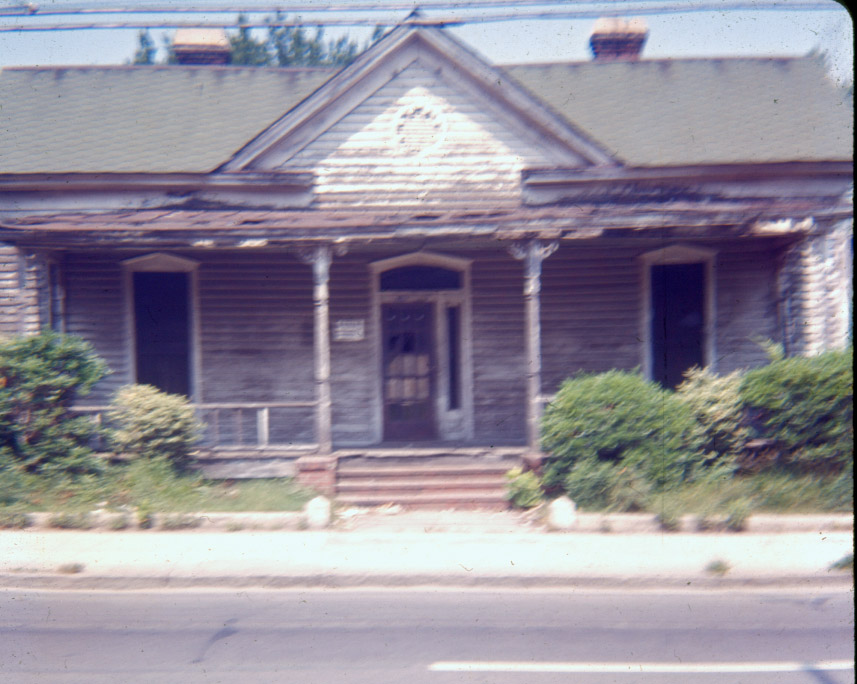 This house had the dubious honor of being the first building demolished by Durham's urban renewal program in 1963. Its present-day location would be hovering somewhere over the westbound lanes of the Durham Freeway. 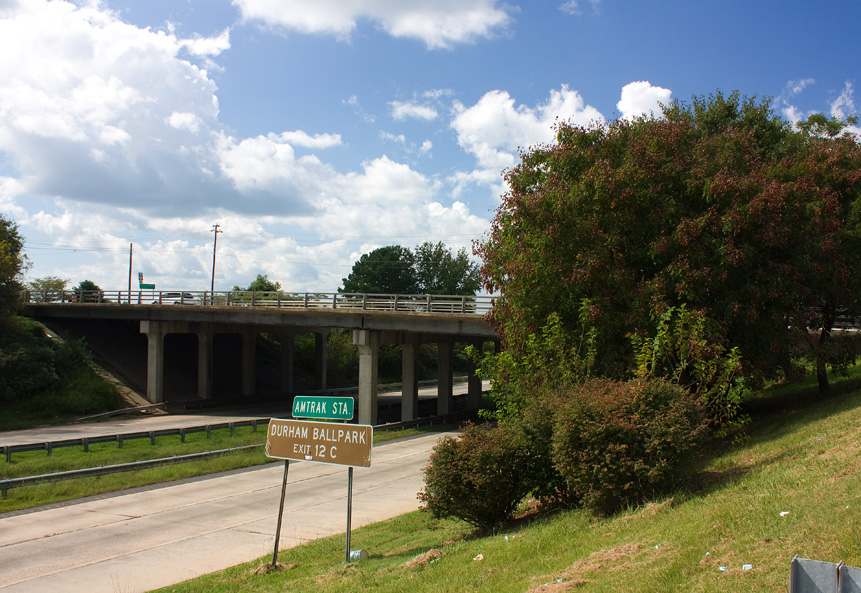 In Lewis Shiner's novel, "Black & White," a body is buried in the concrete embankment by the new expressway -- under the Fayetteville Street bridge. (See right side of your last photograph.)