In 1966, the bottling plant moved to Hillsborough Road, and transfered the former plant to Goodwill Industries. 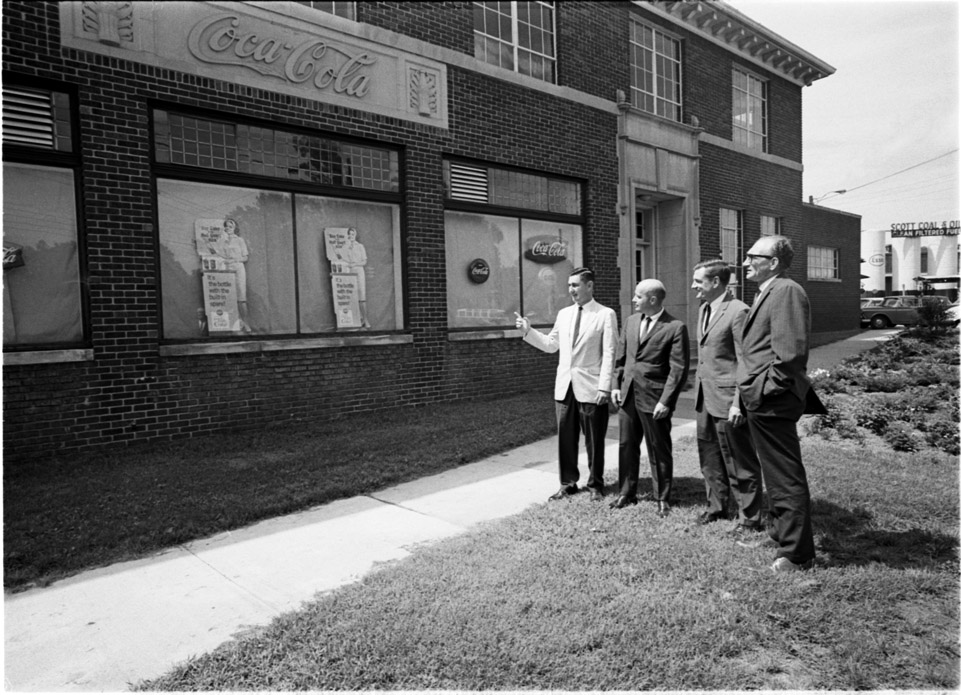 At the time of property transfer, 08.11.66
(Courtesy The Herald-Sun Newspaper) 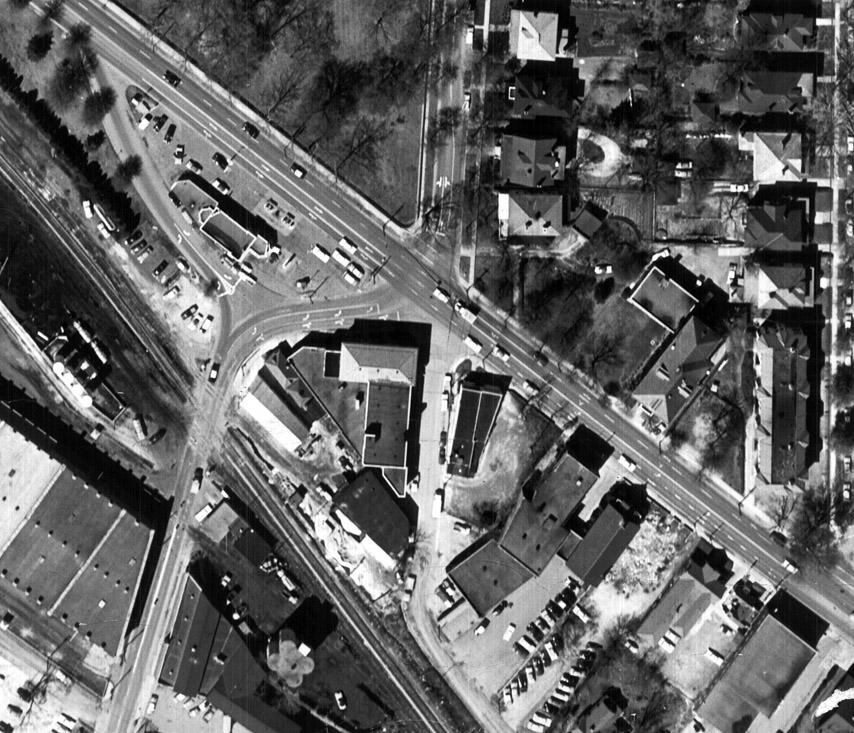 1959 aerial showing the hipped roof Coca-Cola plant at the intersection of Milton and W. Main, near the center of the picture. 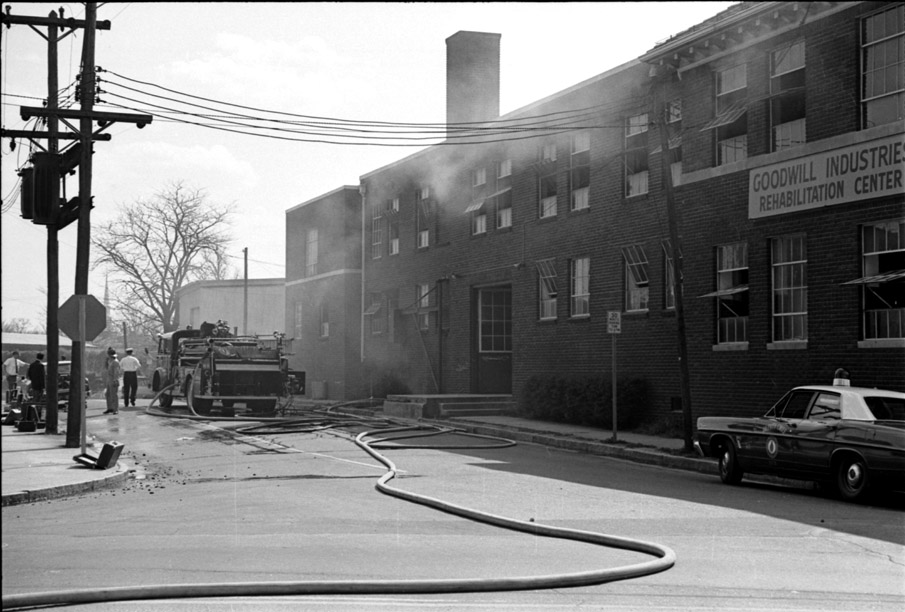 View of the east side of the building during a fire, 03.29.68
(Courtesy The Herald-Sun Newspaper

Goodwill opened up a store in Edgemont sometime during the 1970s or 1980s, in a former Colonial Stores supermarket. They operated out of the former Coca-Cola building until the early 80s as well, before consolidating in Edgemont. By the late 1980s, the Coca-Cola plant was a Kinko's.

Sometime during the 1990s, Kinko's moved to 9th Street, and the former Coca-Cola plant became offices for Duke, which it remains today.

Although I didn't take the above picture from the right angle to show it, I really love this building; and that is almost entirely because of siting - the way that it sits at an oblique angle to the road - a gateway to downtown after leaving West Durham and passing through the oaky portion of West Main in front of Duke's East Campus. It's good architecture, but it's amazing how powerful a reasonably simple building can be just by how it addresses the street.

Goodwill opened their store on East Main before they closed this one. They operated simultaneously for several years. My recollection is that they closed this store about 1983-1984. When it was renovated, the first tenant was a restaurant which didn't last very long. I believe that there was at least one other restaurant in the building before it became Kinko's.

I really wish it had remained a restaurant. It's a great space and a great building.

This is my favorite (?) so far. It reminds me of the old Pepsi-cola plant up in Halifax County, which is now a library.

One of the short-lived

One of the short-lived restaurants was named "Classics" (or something similar). I think that was sometime late 80s/early 90s.

I've been racking my brain

I've been racking my brain trying to think of the original restaurant. I think it was "Frickidills," or something similarly absurd sounding. I believe that there was one in Greensboro by that name first.

The restaurant that converted

The restaurant that converted the Goodwill Store was called Frickadills and was an off shoot of a Greensboro restaurant of the same name. They used to have a great Sunday brunch. Kinko's occupied the right side of the building and the restaurant was on the left.

Those replacement windows are

Those replacement windows are really terrible.

I saw your post about the old Durham Coca-Cola Bottling Plant building. I'm the archivist for The Coca-Cola Company and started my own blog, Coca-Cola Conversations, in January. I loved seeing the photos of the Coke plant on your site and have found some information on the Durham bottler. The first Coke was filled in the top building you show on July 15, 1930, when the new (at the time) plant bottled 275,000 cases of Coke a year. In those days, the bottler had six trucks, six salespeople and only six employees! (There were 50 employees by 1946.) The plant on Hillsboro Road opened in 1961 and had an open house during Thanksgiving week 1961 -- even offering a Westinghouse refrigerator as a prize (in addition to a free Coke for all)! I hope you'll check out my blog for more information on Coca-Cola's history and heritage. Thanks -- Phil Mooney

You do such a good job of

You do such a good job of documenting these photos I thought I'd add a piece of the puzzle. In the photo dated 8.11.1966, the gentlemen on the left, in the light jacket, is almost certainly W. Kenan Rand, Jr. To my understanding, he started the Coca Cola franchise in Durham in the early 60s.

Thank you all for your

Thank you all for your additional history on the building and Coca-Cola's operations in the building. Phil - I'd be interested to know if you have any information of the previous Durham Coca-Cola location, linked at the beginning of this post.

My name is Scott Greenwood and I am the Chief Operating Officer for the Duke Talent Identification Program (Duke TIP) - the present sole occupant of the old Coca-Cola Bottling Plant. I worked directly with the team that lead the most recent renovation of the space. I am also a big fan of this beautiful building and would love to share information as much as possible. I would love to learn more of the history, share some of the photo's we have in the building, etc. Thanks for your work on this blog - I had not seen a number of these photo's. Scott

One time it used to be a restaurant in the late 80's. The restaurant name was classic bar and grill, I used to work there.