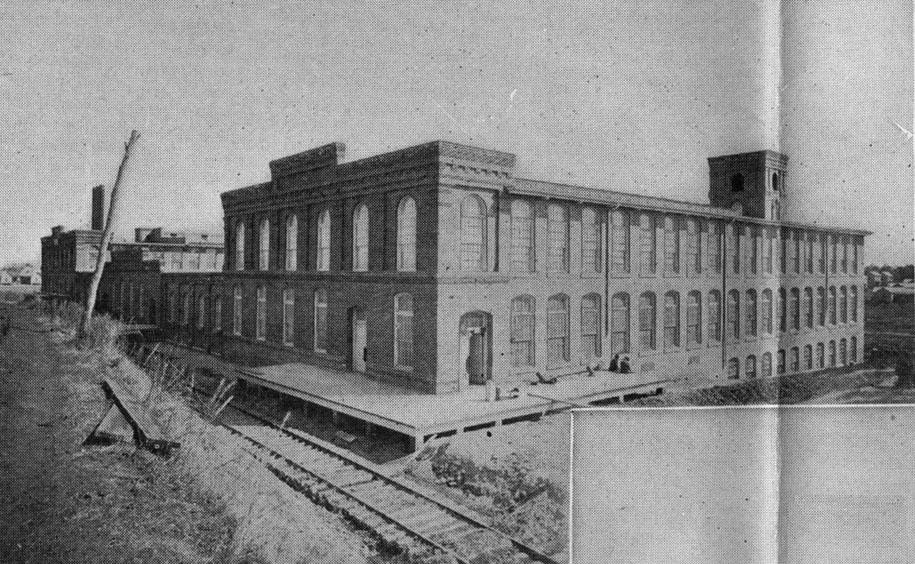 In 1901, the company constructed a new factory for the Golden Belt Manufacturing company, across from Julian Carr's Durham Hosiery Mill No. 1 at Angier and Main Sts. The factory was divided into a cotton mill (Building 1) with an attached power plant and a bag mill (Building 2.) A warehouse building stood in between Buildings 1 and 2, and a frame detached office building stood to the south, facing "Edgemont Avenue" (Main Street.) 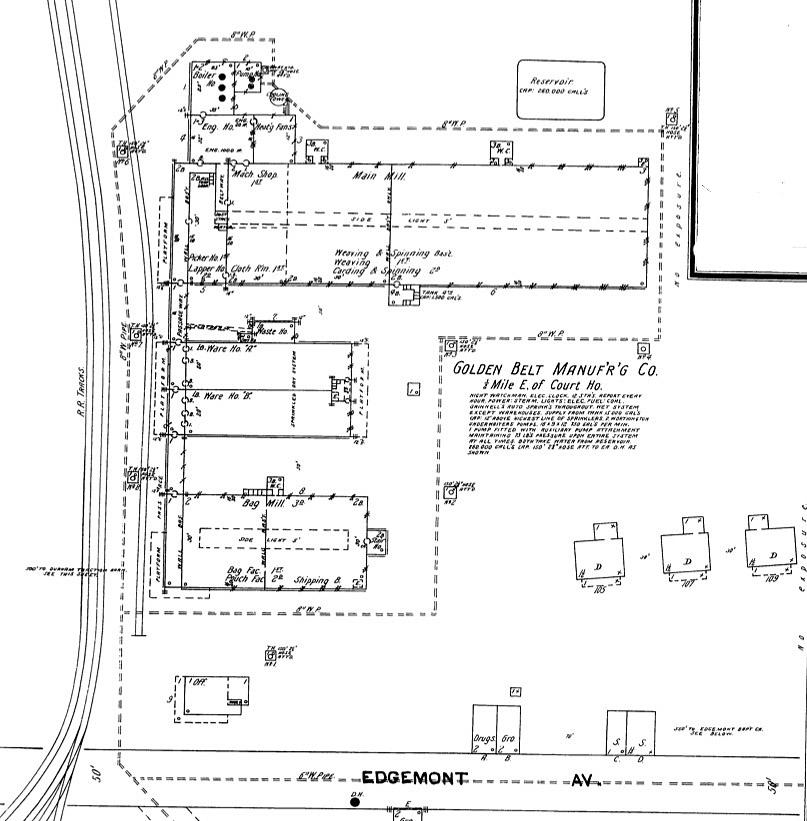 1902 Sanborn map, soon after the construction of the factory. Building 2 is the southernmost of the brick factory structures in this map, noted as having the "Bag Mill" on the 3rd floor, the "Pouch Factory" on the 2nd floor, the "Bag Factory" on the 1st Floor, and shipping in the basement. The building's tower is on the eastern end of the building, noted as a stair tower. 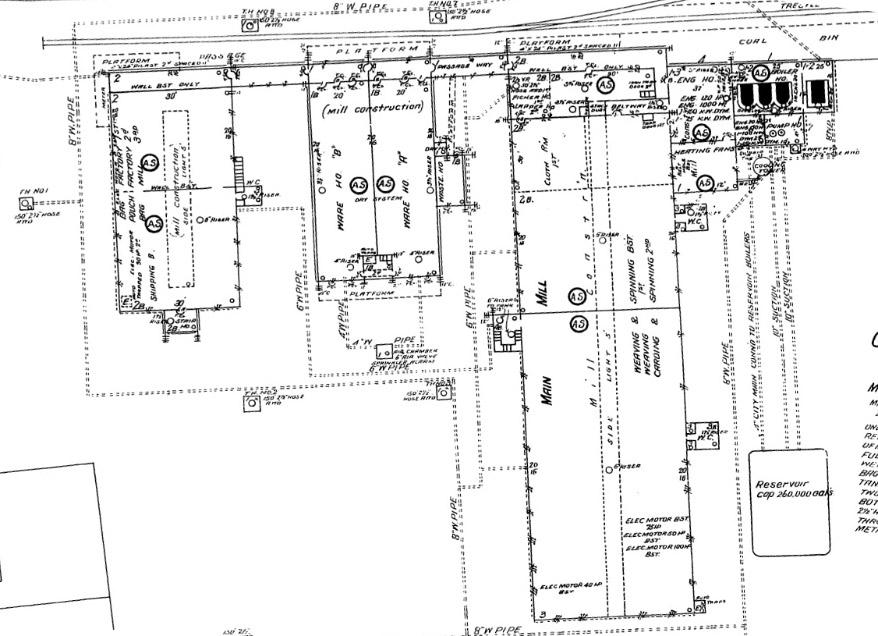 Building 2, 1910s - looking north. (Likely taken from the tower of Durham Hosiery Mill No. 1.) It's easy to see the addition to Building 2 in the foreground, over and to the right of the "drive-thru" entry.
(Source Unknown) 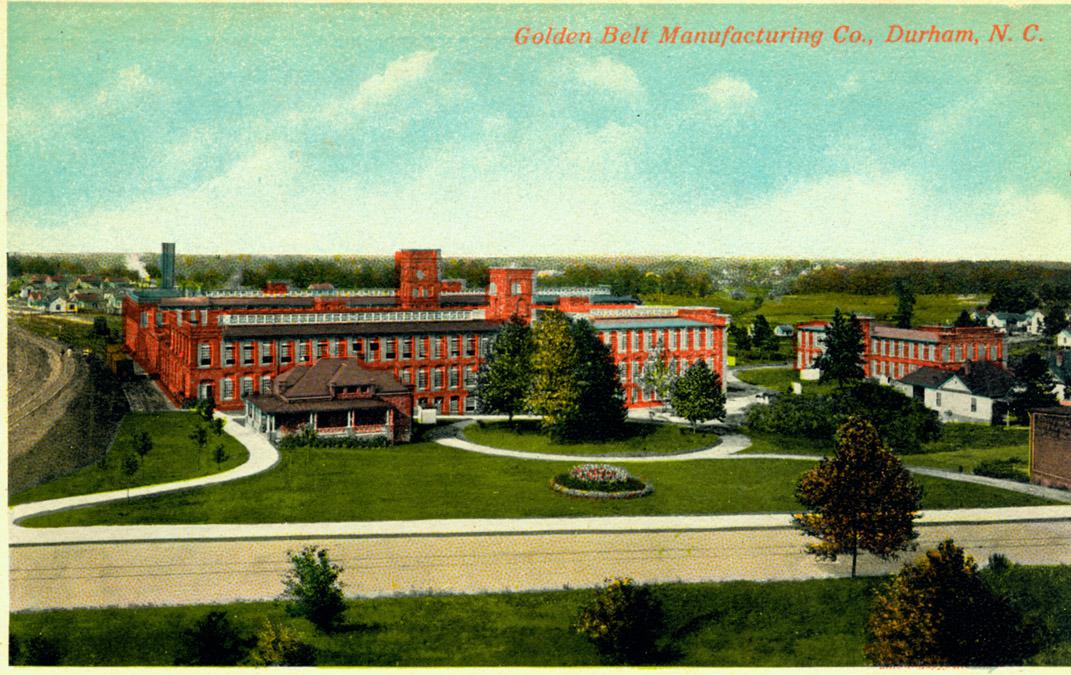 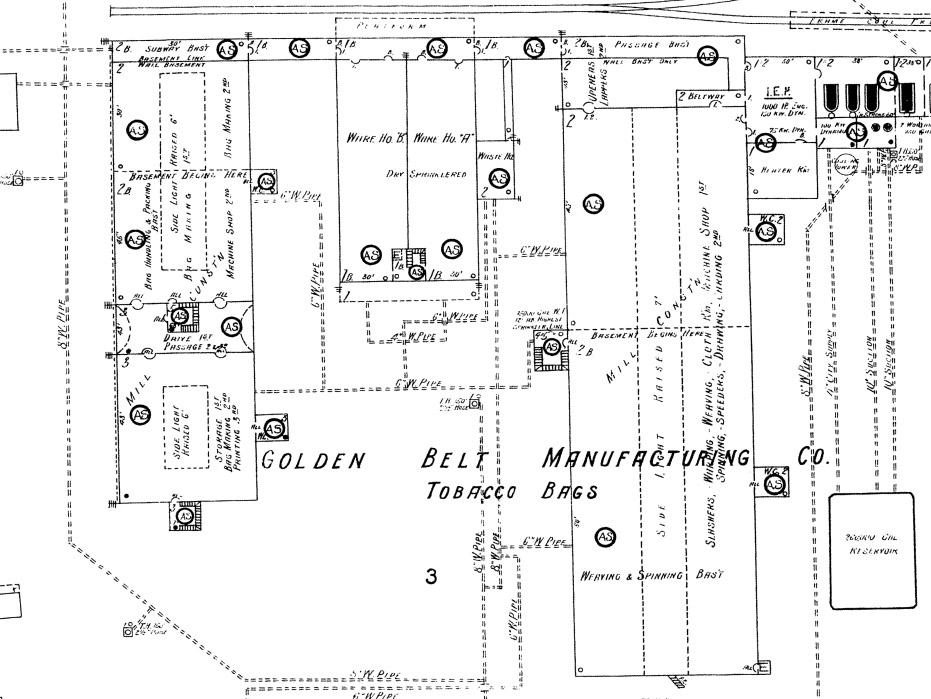 1913 Sanborn map showing, from left to right, Building 2, Warehouse, Building 1, and the power plant. Uses in the building are shown as Printing, Bag Making, and Storage in the addition - Bag Handling and Packing, Machine Shop, and Bag Making in the 1901 portion. A "Drive" through the building is shown in the center. 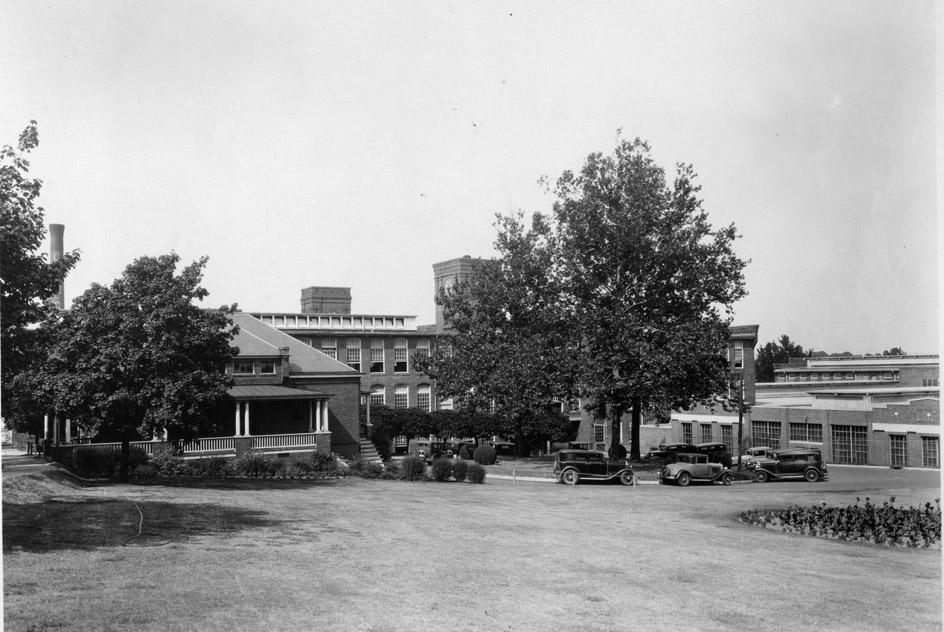 The 1930s were an era of tumult and change for the textile industry nationally, and particularly in East Durham. The increasing importance of imported hosiery and a shift away from cotton to silk hosiery diminished the market for cotton products manufactured in Durham.  Golden Belt, by virtue of its relationship with the American Tobacco Company – as supplier of the cotton bags for Bull Durham tobacco, remained somewhat insulated from the decline in the hosiery market, and was able to maintain its capitalization and output during the 1930s.

In 1927, Building 3 was built at the eastern end of Building 2; the eastern stair tower was removed from Building 2 for this. Construction of multiple additional buildings greatly expanded the campus. 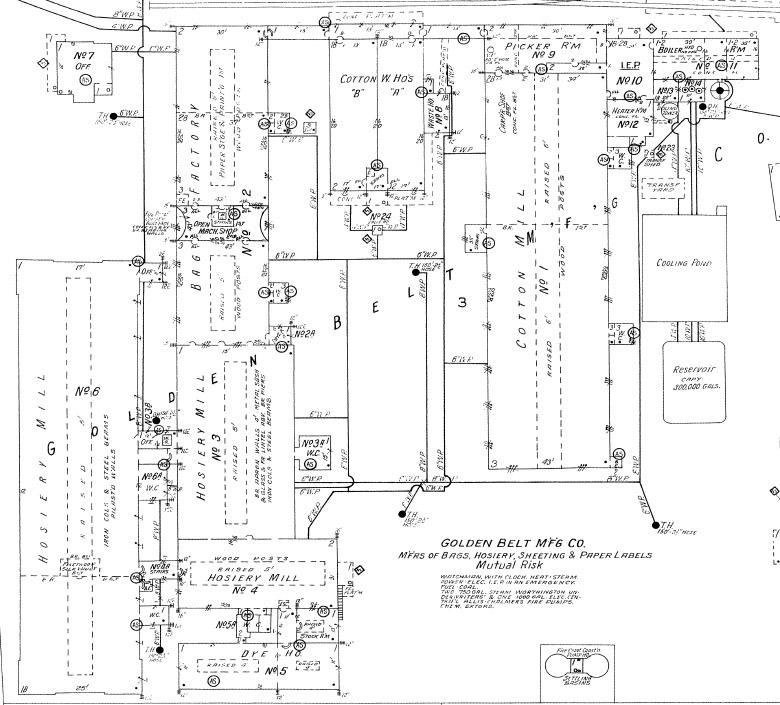 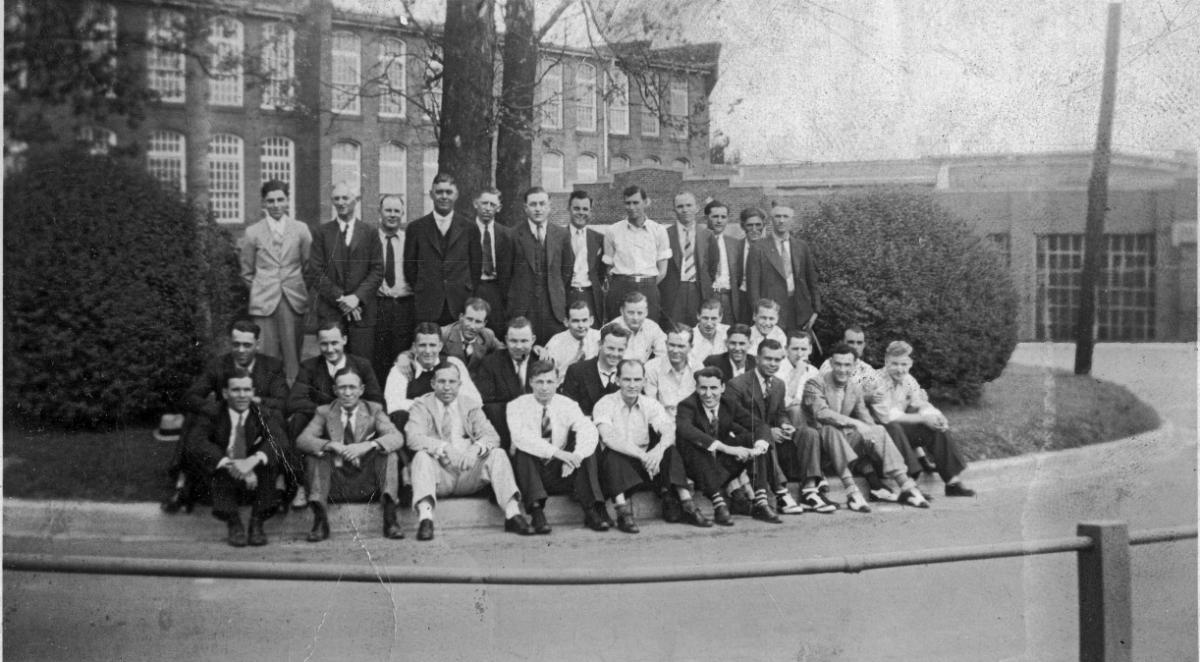 Machine Shop workers in front of Building 2, 1940s. The machine shop was located on the 2nd floor of Building 2, west of the main stair. (Courtesy Janet Rhodes Downs - her father is in the middle of the 2nd seated row; a man behind him has his hand of Mr. Rhodes' left shoulder.) 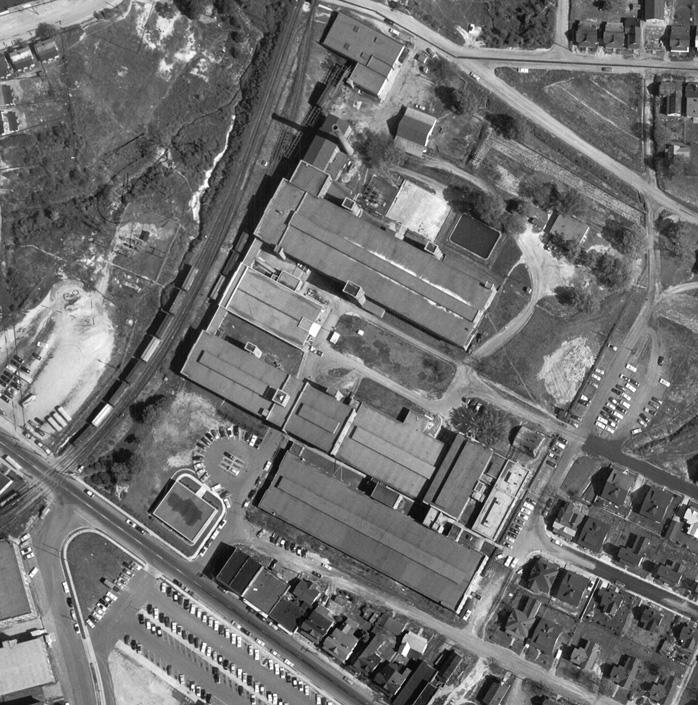 Above, Golden Belt from the air in 1959, showing the tower and "Drive" of Building 2 in the context of the then-new office building (Building 7) 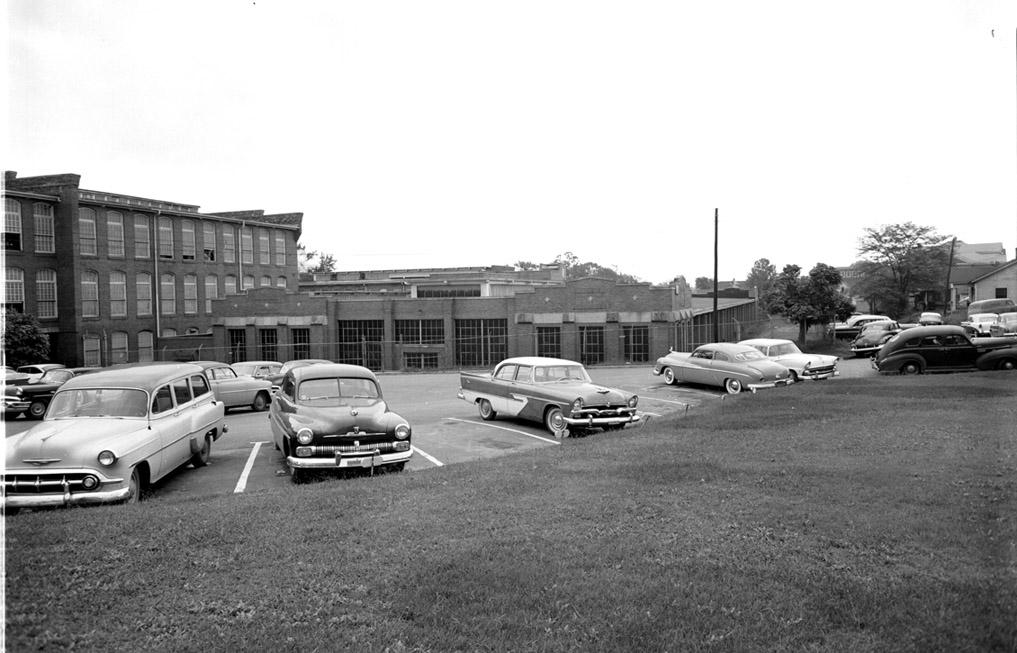 
Below, Building 2 in the late 1970s. The original windows have been removed and bricked in, with intermittent small windows in the infill. The monitor roof has also been closed in. 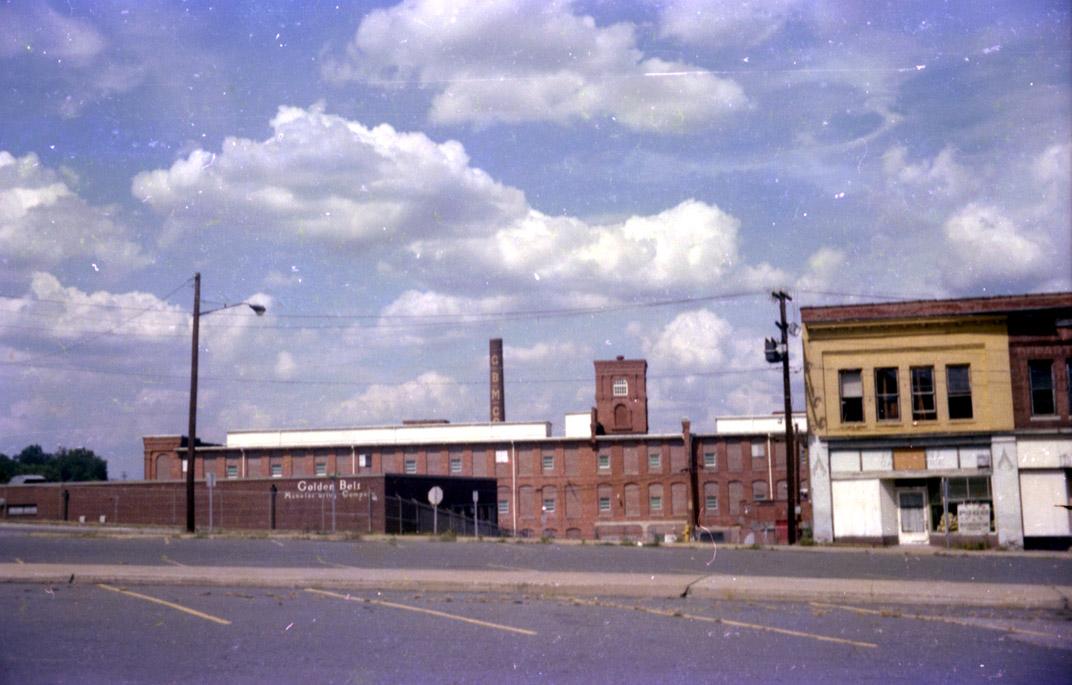 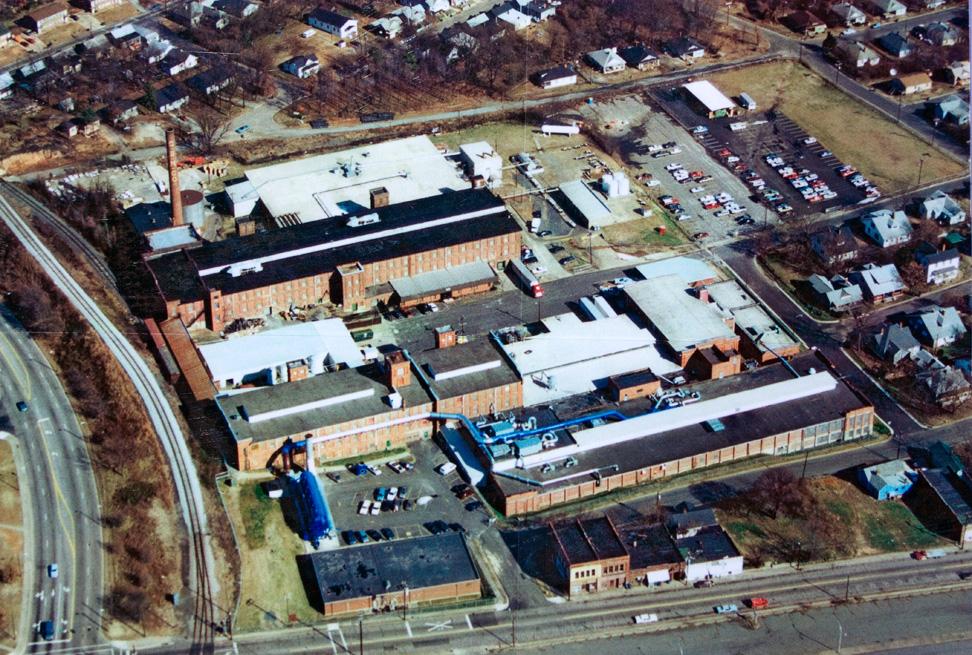 The company continued to manufacture cigarette packaging into the 1990s. Business continued to decrease, however, and the loss of Phillip-Morris' business in 1992 halved revenue. In 1995, Brown and Williamson acquired American Tobacco. An antitrust judgment evidently forced them to sell off several brands.  In 1996 Brown and Williamson Tobacco Co., the owner, failed to attract a buyer for the buildings and donated the facility to the Durham Housing Authority. Julio Cordoba of Raleigh purchased Building 1 and the power plant  in 2002 to create the East Village Corporate Center, which would provide space for small business tenants. This entity received $36,000 in incentives to create jobs at the site.

In 2004, the DVI subsidiary of the Durham Housing Authority put the southern portion of the complex on the market, including Buildings 2-7. It was sold to Scientific Properties in October 2006, for $2.6 million.

As part of the redevelopment of the property in 2007-2008, Building 2 was completely restored, and repurposed as event space, retail space, and office space.

Below, a view of the complex from East Main St., similar to the above historical photos, 2007, showing Building 2 at the beginning of renovations.


Below, Building 2 seen from the north side, looking southwest, 2007. 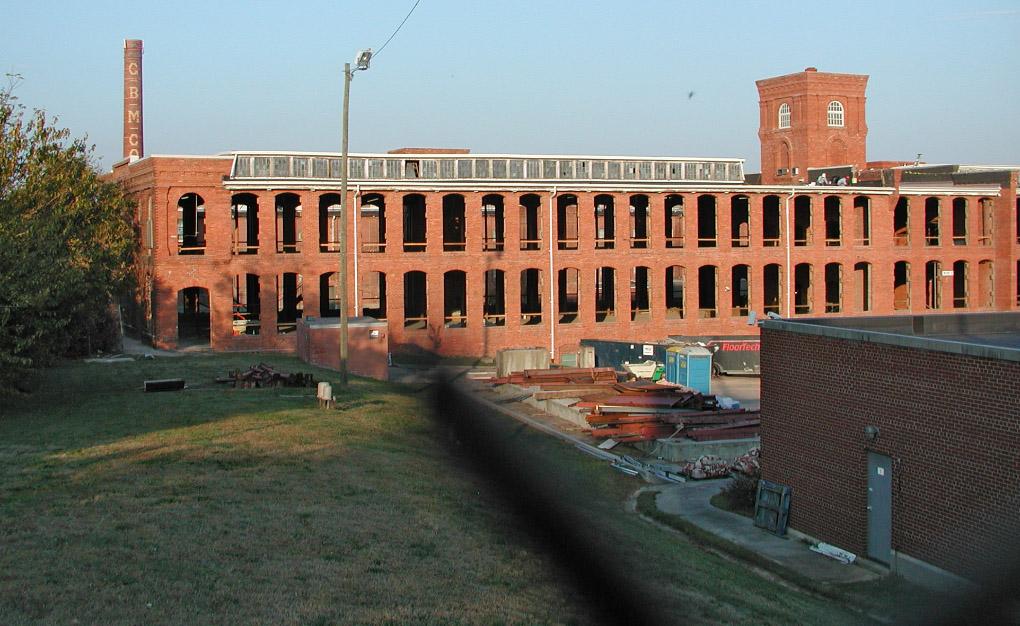 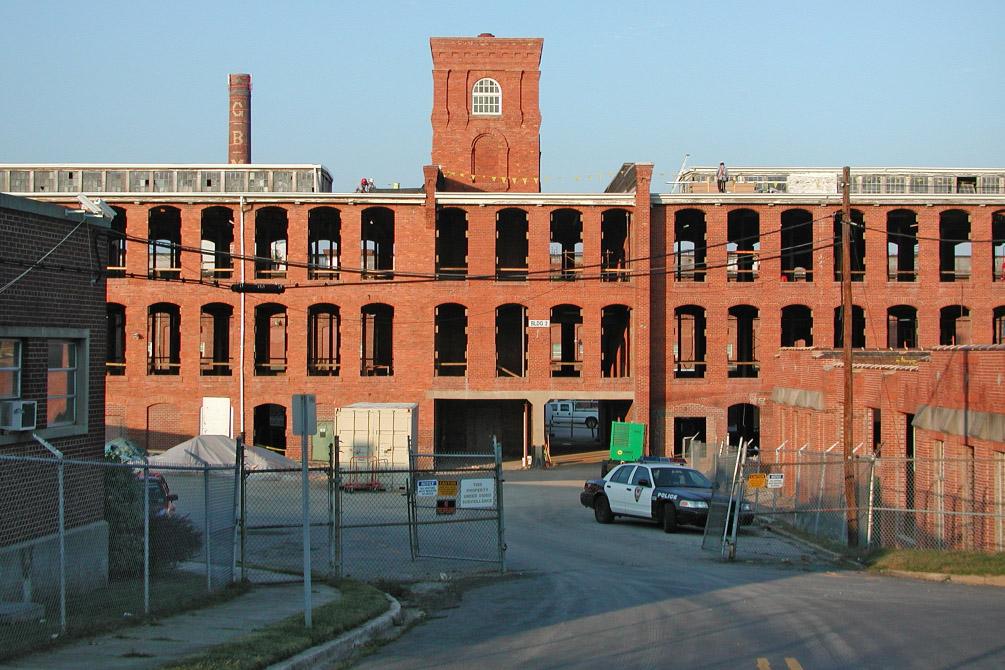 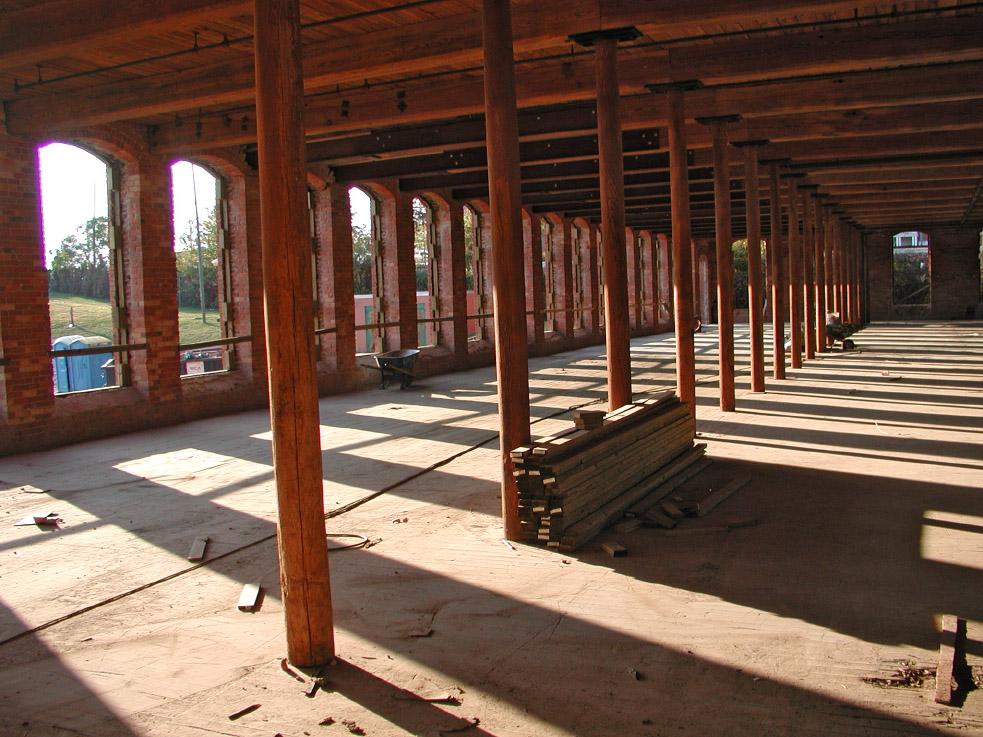 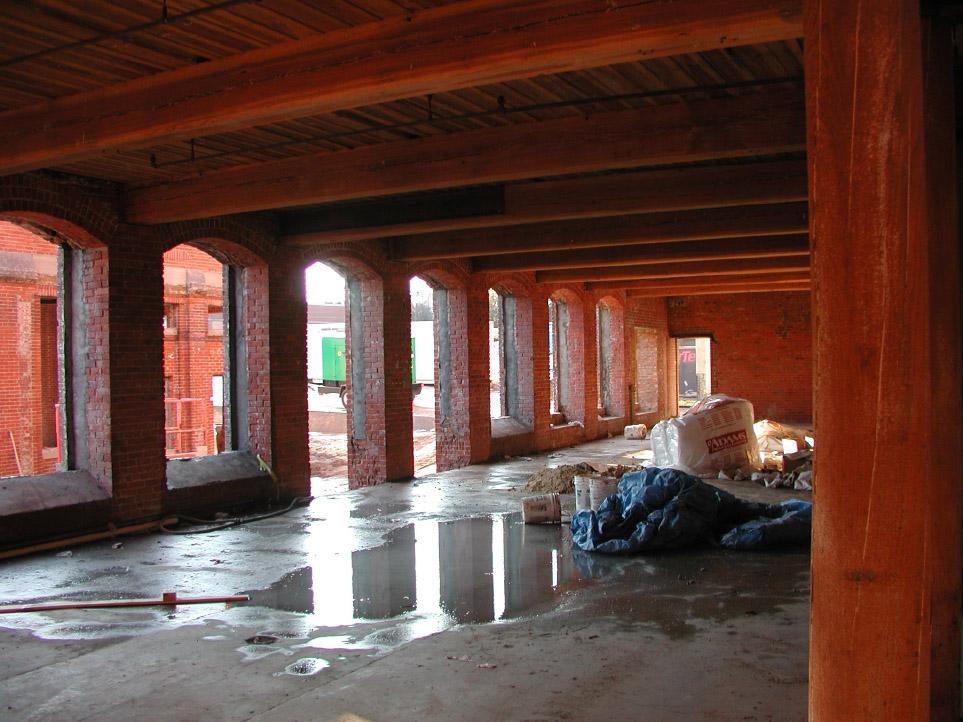 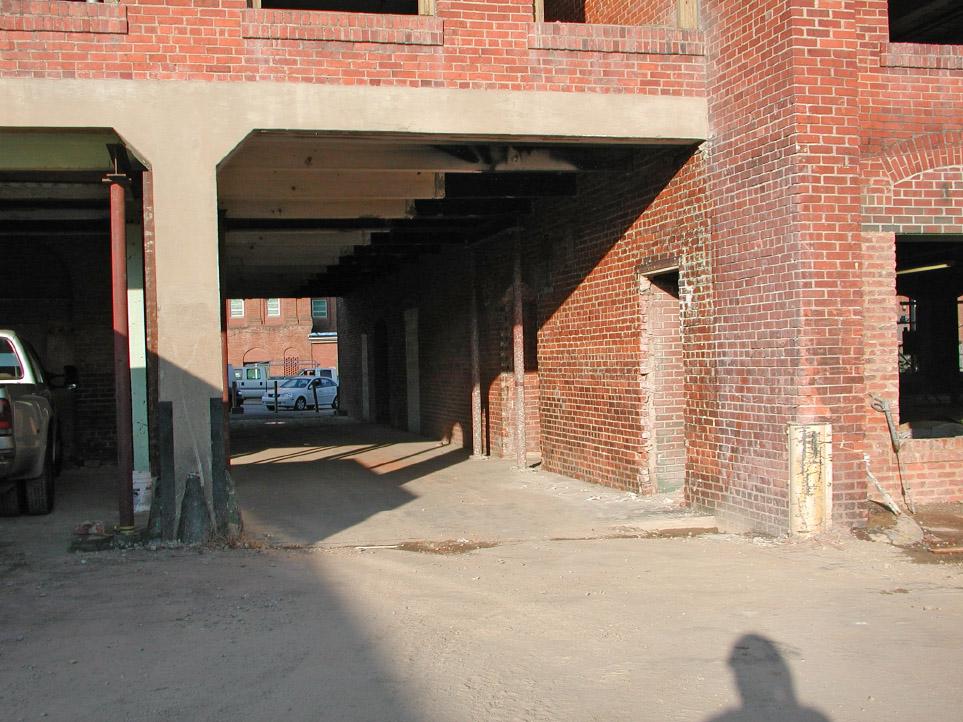 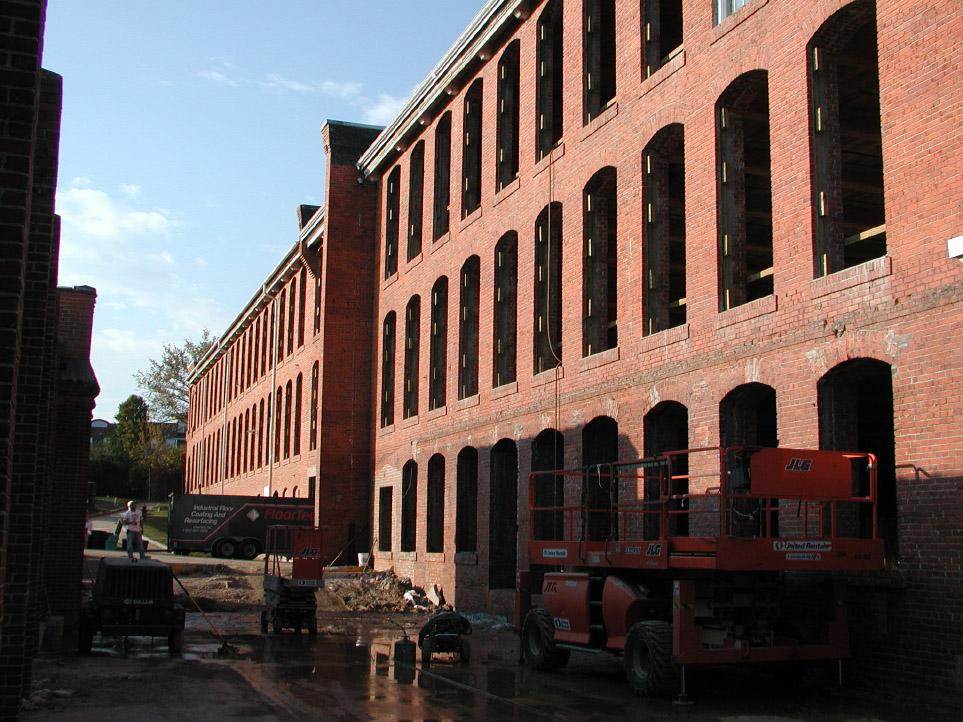 In July 2008, the complex opened for business. 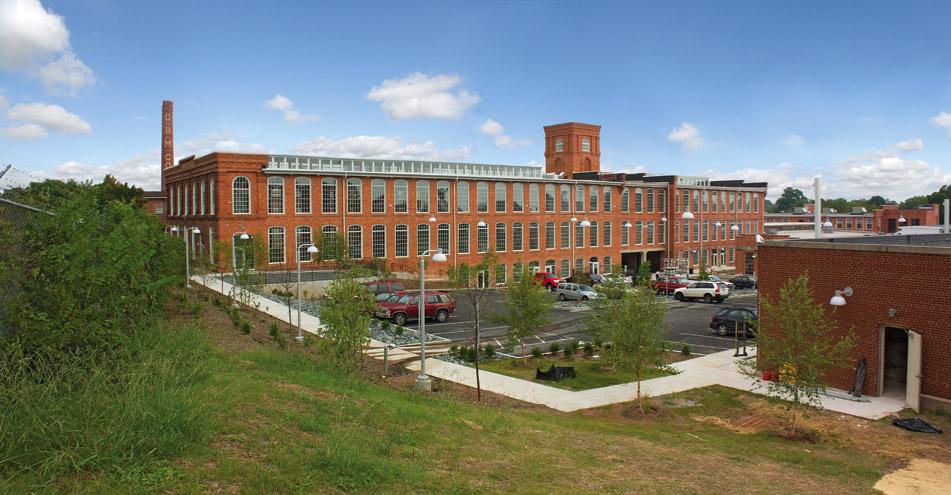 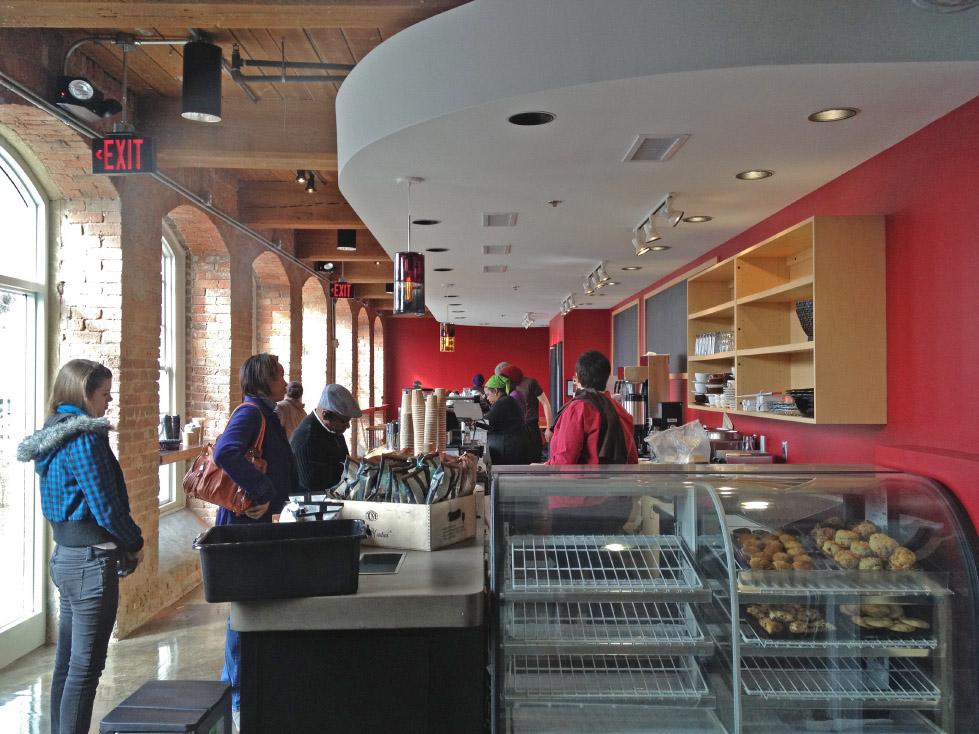 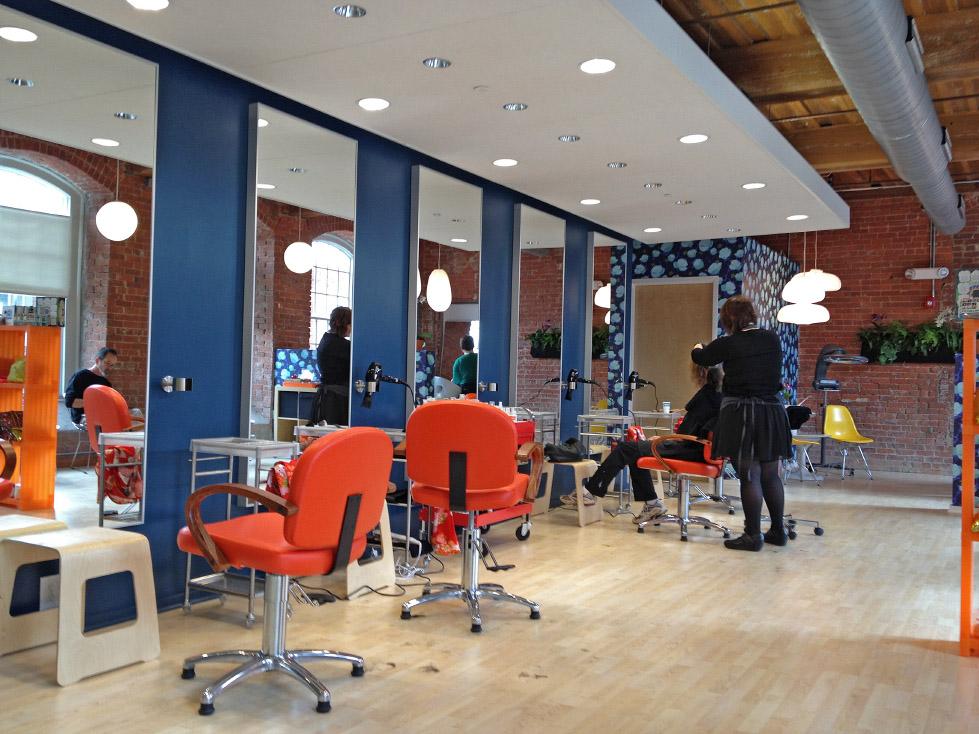 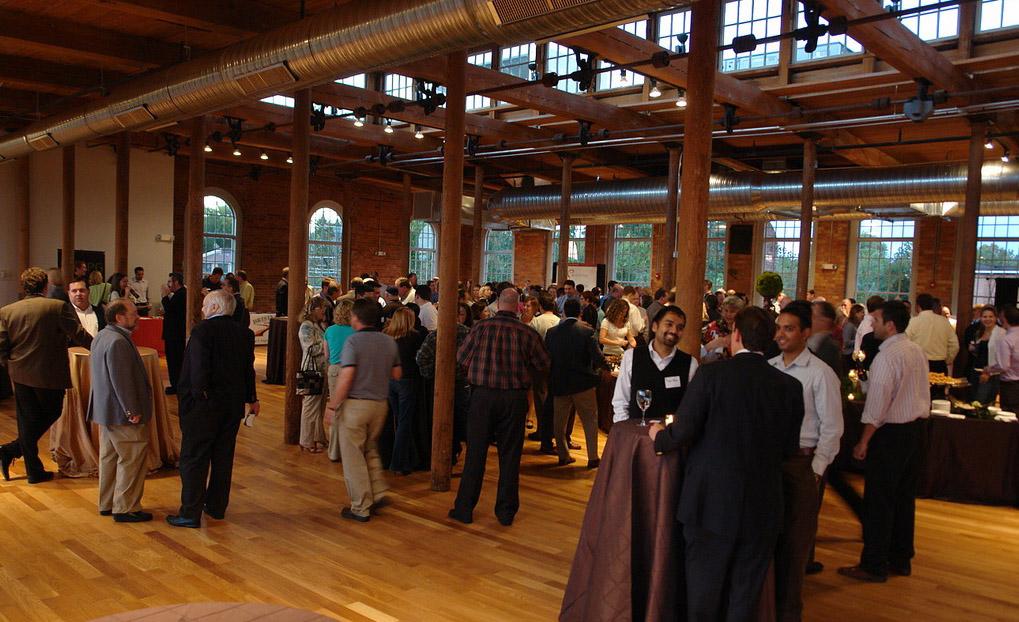 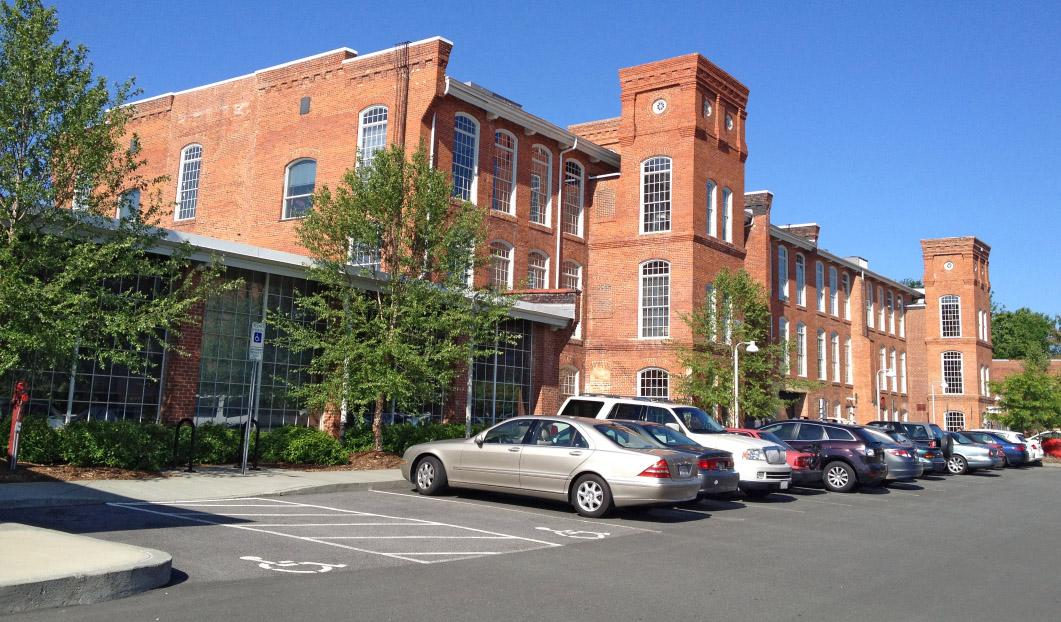 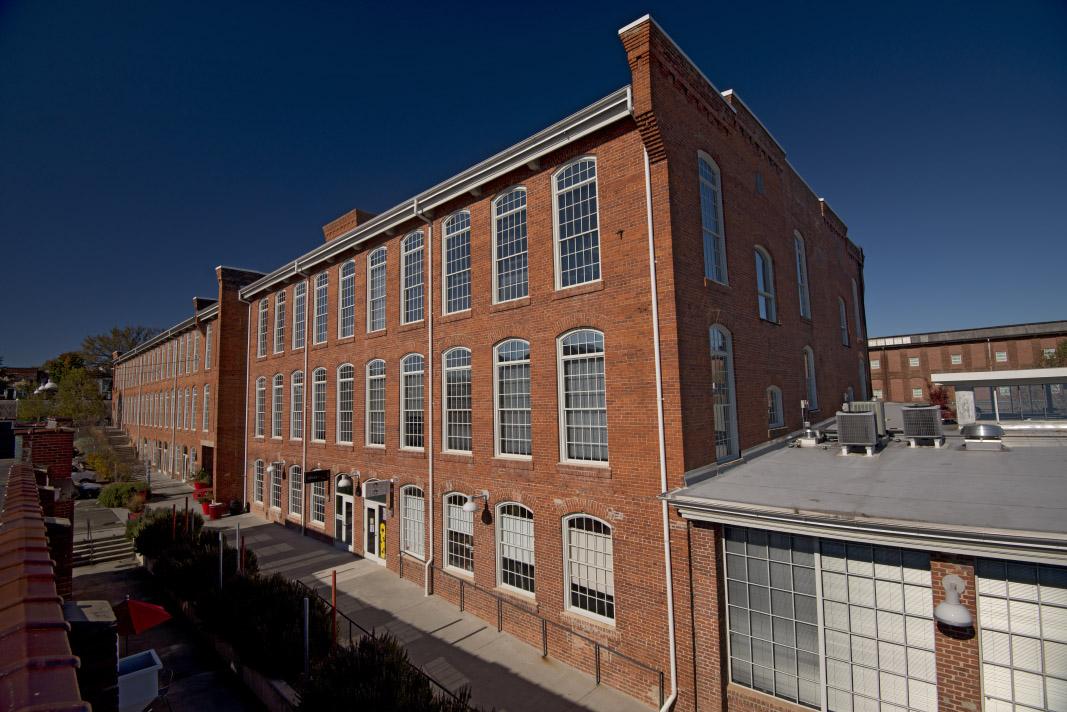 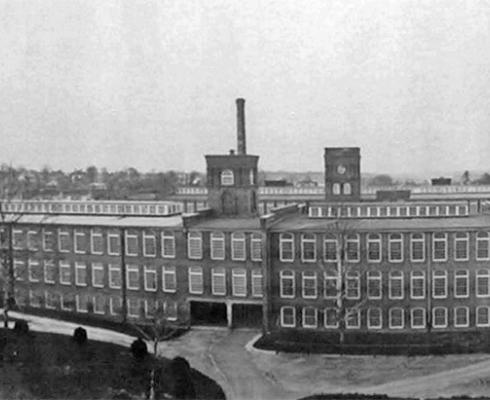 The history of Blackwell's Durham Tobacco (later American Tobacco) and the Golden Belt Manufacturing Co. are inextricably mingled. In 1887, the Golden Belt Manufacturing Co. originated in a portion of the Bull Durham Tobacco Factory (the white building at the northern extent of the American Tobacco complex) as an operation to produce the cloth bags...
Read More
Related Businesses/Organizations

Founded in 2001 by Andy Rothschild, a former physician, Scientific Properties is, as of 2013, a real estate development company that has focused on urban adapative reuse projects in Durham, NC. The company provides development, construction management, leasing, property management, asset management, and marketing services for properties. The...
Read More
Related People 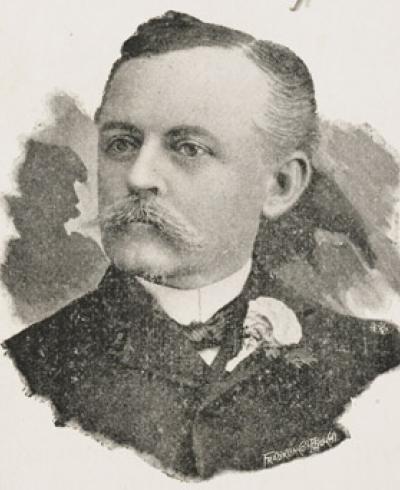 I am curious to find literature, photos, and/or patents of the machinery that my grandfather operated in his lifetime,  and ask your advice and direction for any information of this aspect of Durham  life in this period of American History.