330-332
East Pettigrew Street
Durham
NC
Year built
1929
Year demolished
1977
Architectural style
Art Deco
Construction type
Masonry
Brick
Neighborhood
Hayti
Use
Drugstore
Hotel
Building Type
Commercial
Can you help?
You don't need to know everything, but do you know the architect?
Log in or register and you can edit this. 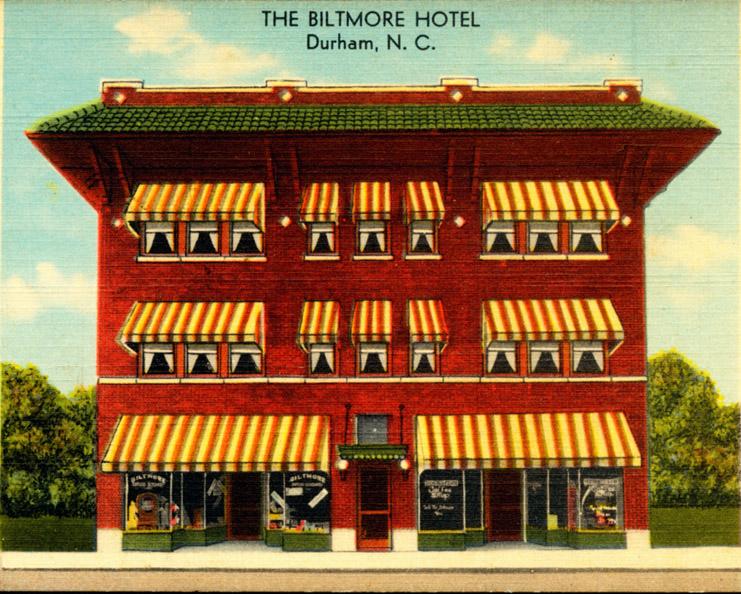 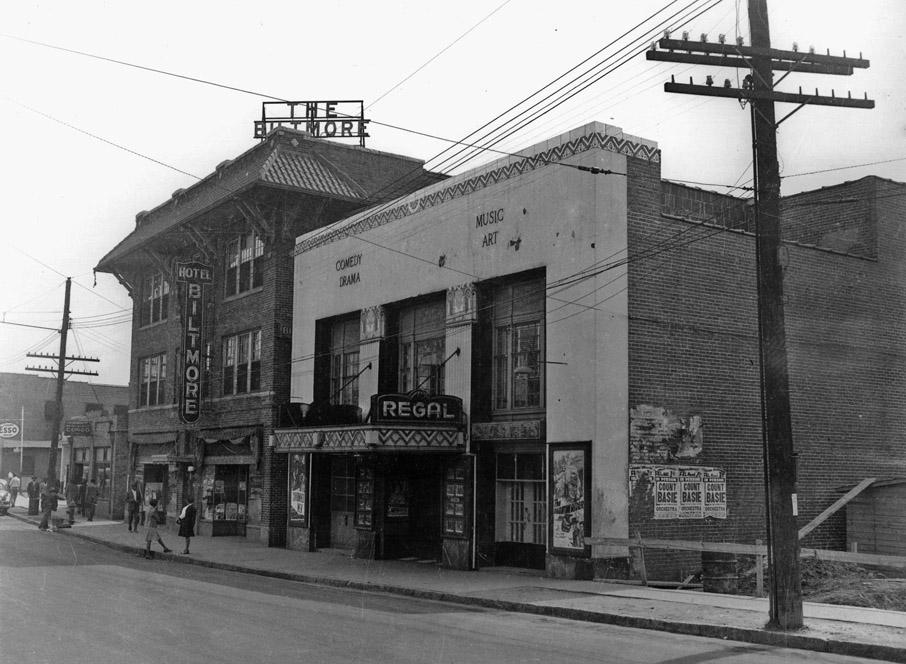 Looking southeast at the Regal Theater and the Biltmore, 1946
(Courtesy The Herald-Sun Newspaper)

Although Dorothy Phelps' book opines the the Biltmore Hotel was built in 1923 by Dr. Clyde Donnell, it seems likely, based on the city directories, that the hotel was built in ~1929. Dr. Donnell's 1951 biography makes copious mention of his various endeavors, but no mention of the Biltmore - an unlikely omission. So the beginnings of the Biltmore are a bit unclear, but it was decidedly the pre-eminent hotel in Hayti, and in the segregated era, one of the pre-eminent hotels catering to African-Americans in the southeast.

Another version of this postcard has writing on the right side of the card which reads:

"The Biltmore Hotel, Durham, NC. Half block from Union Station. America's Finest Colored Hotel. All out side [sic] rooms. Running hot and cold water in each room. The last word in comfort. 'Do It the Biltmore Way'. Atlas Barbee, Manager."

Ms. Phelps describes the typical scene at the Biltmore:

"Artists, educators, and just visitors who came to see the 'big name bands' and Hayti would stay at this 30 room hotel when they came to town. 'It was the only such facility opened to Negroes,' according to Amelia Thorpe. 'Children would gather near the Biltmore to gape at the buses and famous people.'" 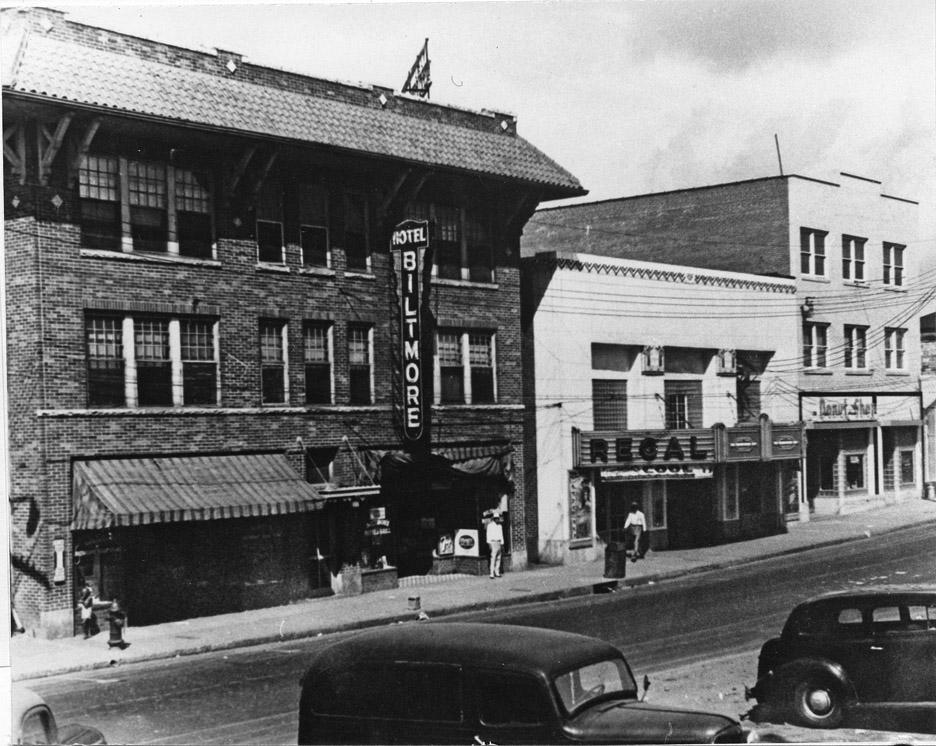 In the 1940s, the hotel was managed by Lathrop 'Lath' Alston and James Baylor; in 1944, Lath Alston purchased the hotel with Pedro Ward, who ran the dining room. Alston described the hotel as:

"one of the largest institutions of its kind in the South, catering exclusively to Negro patrons. It has twenty rooms with ample baths, a dining room serving an unexcelled cuisine and is operated on the European plan. Mr. Alston is a well and favorably known promoter of musicals, bands, etc. He enjoys a reputation as one of the big-time dance promoters in the South."
(I tend to believe the 20 room description rather than the 30 room further above.)

Below, an excerpt from "Negro Durham Marches On" about the Biltmore - 1949.

And a brief bit of film on East Pettigrew, looking west towards the Biltmore ~1947. 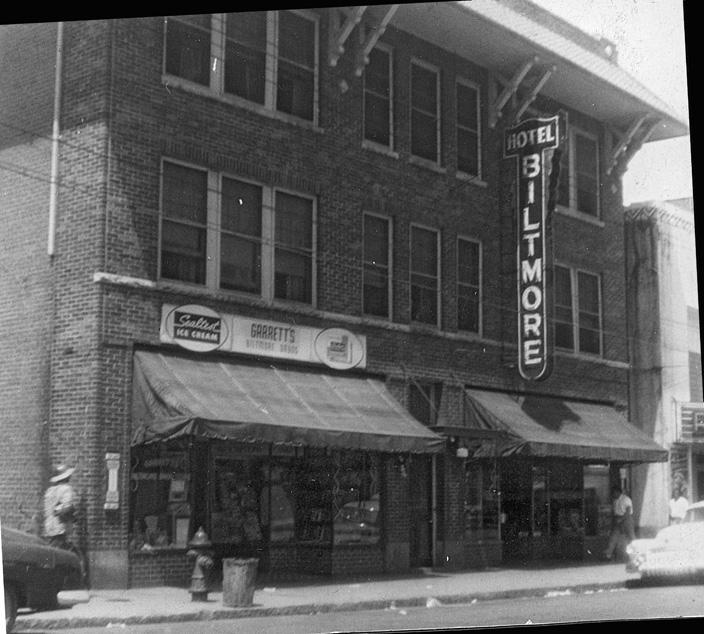 Hayti began to fade over the course of the 1950s; the progressive end of segregation meant less exclusive patronage of Hayti stores and businesses, and visitors to town could stay at hotels outside of Hayti. The general economic flight of the 1960s affected the African-American community as well as the white community. Those with means to do so began to move to suburban areas.

The language to describe Hayti in the 1950s is remarkably similar to the language used to describe structures in our historic neighborhoods today - 'blighted' 'obsolete' structures. The "What Is Urban Renewal?" public information pamphlet from ~1960 describes urban renewal as follows:

"1) The use of code enforcement and public improvements in order to prevent good areas from becoming blighted. 2) The removal of spots of blight and the rehabilitation of structures that can be saved. 3) The clearance and redevelopment of slum areas that cannot be saved."

Should sound familiar to those who follow the policies of our city administration.

Views of Hayti from the 1960s do not show a thriving area, but rather an area that was beginning to see economic difficulty - beautiful structures like the Biltmore looking more faded than fashionable. 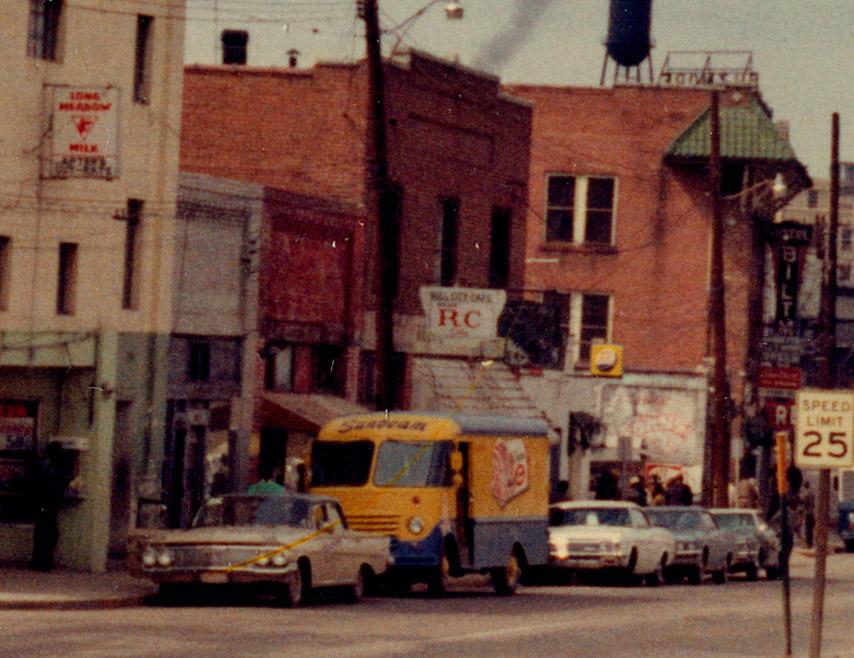 Structures to the east of Ramsey Street were torn down by the late 1960s. The Biltmore and surrounding buildings survived into the 1970s. 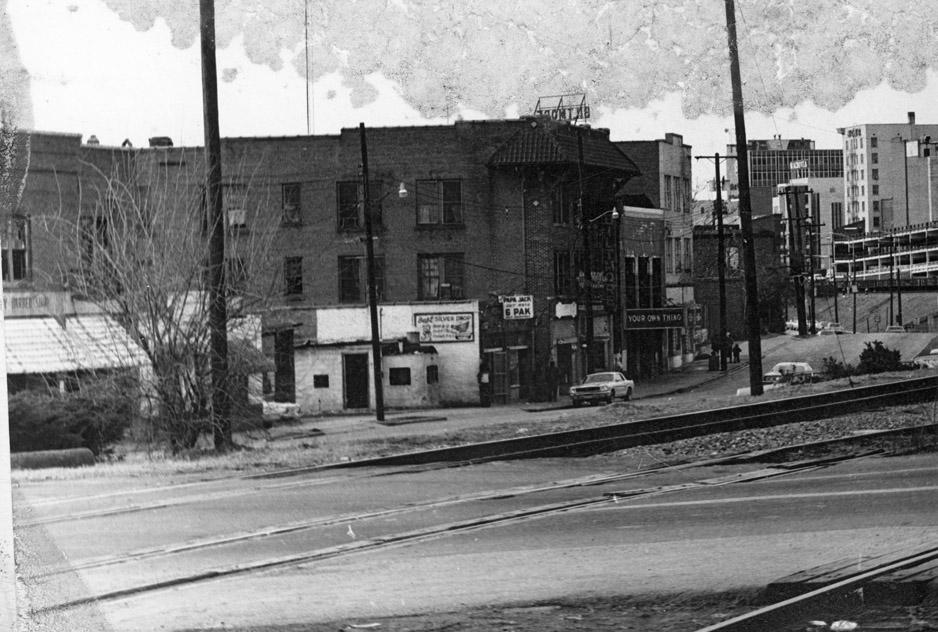 The use of the Biltmore seems to have, um, declined a bit by the 1970s. To recount the story one local told me.

"In the early 1970s, I was working to erect the radio tower for WAFR radio in a building two doors down from the Biltmore [ed note: WAFR was in the Donut Shop building]. We got permission from Dr. Garrett to tie our tower guy wire to the roof of the Biltmore Hotel."

"We went into the hotel and went upstairs - and it became very clear that we were in a whorehouse. Prostitutes, all white, were on the beds of the rooms, wearing only negligées, and there were several very large Black men who were looking at us as if to say 'what the hell are you doing here?'"

"I was 23 years old, and had never encountered anything like this before. We had to go back every day for two weeks and go through the rooms to get to the roof ladder, which was in the closet of one of the rooms."

Soon the Regal and the Donut shop buildings had been demolished, and the Biltmore was one of a few survivors. 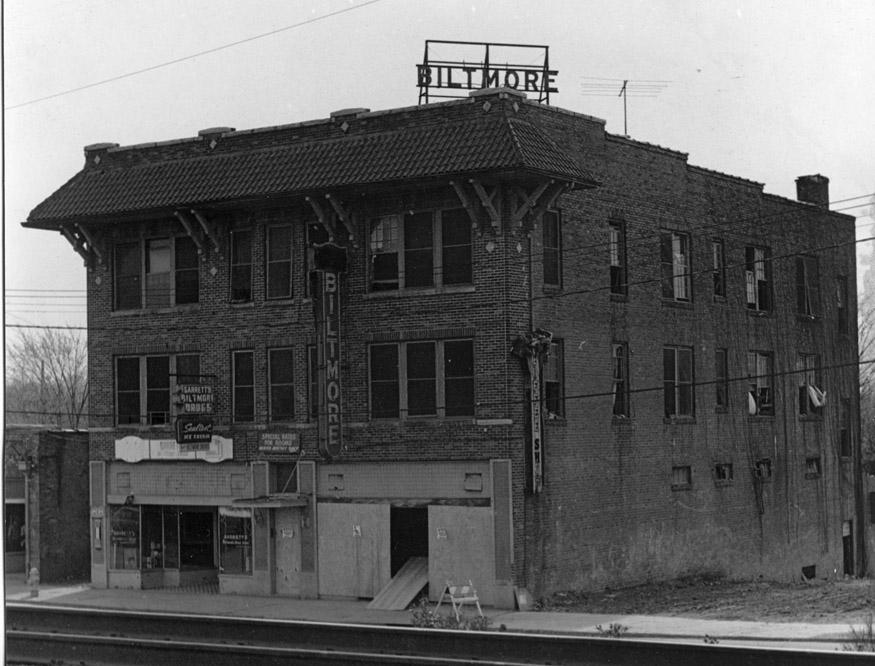 Mid-1970s view of the Biltmore. The drugstore remains open while the hotel is boarded up. 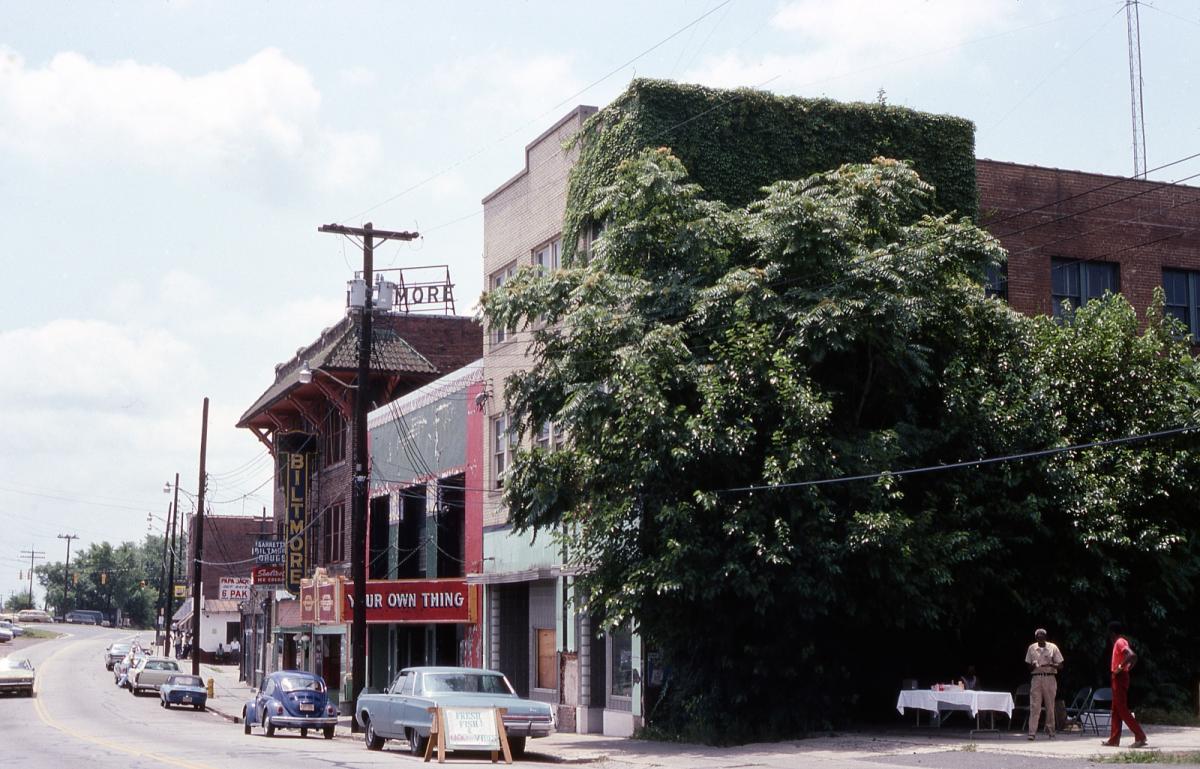 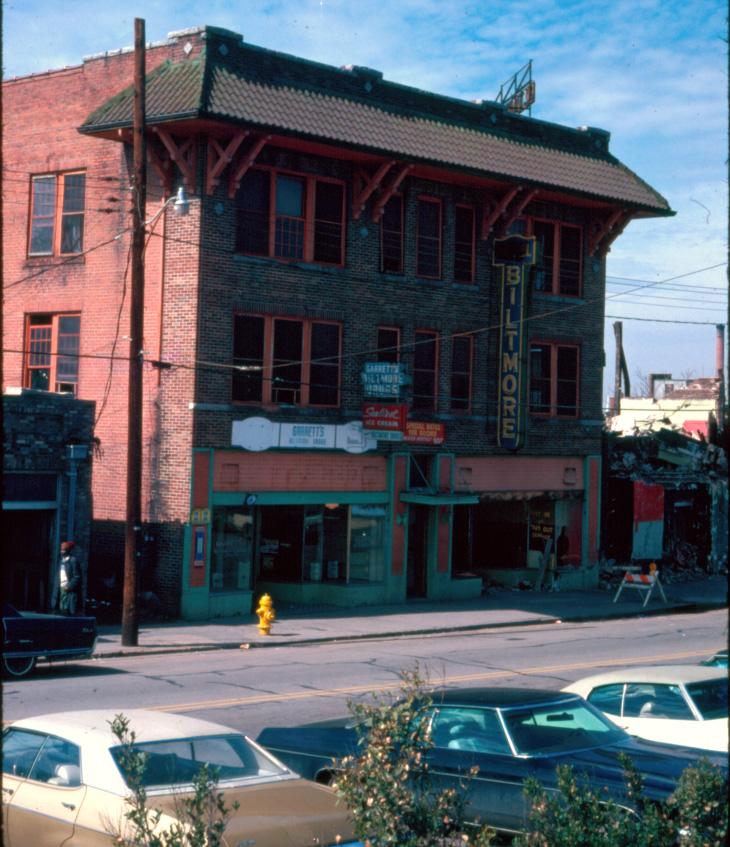 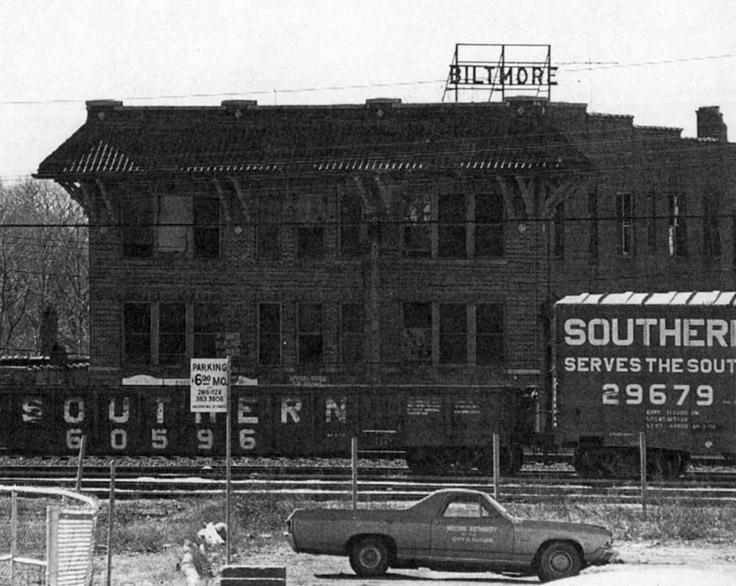 January 1977 view of the Biltmore from across the railroad tracks. Joel Kostyu wrote, in a rather odd passage accompanying this picture

"Biltmore Hotel reflects the change in the integrated south. Separate black hotels are no longer needed, so the old Biltmore will be demolished. It is reported that it will be torn down brick by brick and that these bricks will be cleaned by unemployed youth and resold." (From "Durham: a Pictorial History" by J. Kostyu)

Great. Wonder how that worked out?

The Biltmore was torn down in 1977. The spot has been some form of parking lot since that time. 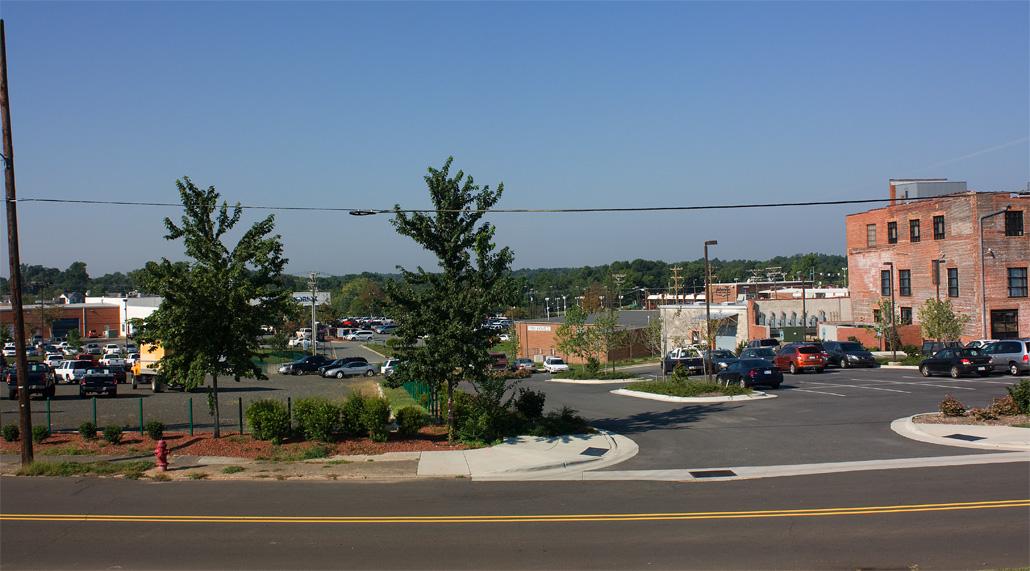 Looking south at the site of the Biltmore, 09.04.08. (G. Kueber) The building extended from approximately the middle of the driveway left to the fire hydrant (notice the fire hydrant in the historical photos.)

That section of Pettigrew really reminds me of Hay Street in Fayetteville(well, sans bars and strip joints). It's almost as if the city tore it down so as to not be reminded by it in the future. So many cool buildings gone to the landfill (well, except the bricks that were "cleaned by unemployed youth and resold"!!!).

Thanks for the great post(s).

Great photos! It's really too bad the hotel was not preserved. Yet another parking lot... I have a feeling that were it still here today it would be a prime candidate for refurbishing. Oh well, the things that happen in the name of urban renewal.

Speaking of bands, I noticed the promotional posters on the side of the Regal Theatre in the first photo for the Count Basie Orchestra. Looks like they attracted some pretty good talent to Durham!

So, where the bricks from the biltmore hotel really resold, or were they just thrown away?

man, that particular roof style always gets me, especially with the exaggerated brackets.

Nathan Garrett has written a memoir, which will undoubtedly includes stories about the Garrett Biltmore Drugstore, called A Palette, Not a Portrait.

Read more about a November 2010 event at the public library, here:

I heard there was a mural erected for Garrett's Drug Store and the Biltmore Hotel in Durham. Does anyone know where that might be?

This mural is on the side of a building facing Lakewood Avenue between Roxboro and Fayetteville Streets.

I have heard that Eleanor Roosevelt stayed in the Biltmore Hotel one evening when her maid was not allowed in the Washington Duke Hotel. This could have been in 1950. Did this actually happen or is it an apocryphal story?