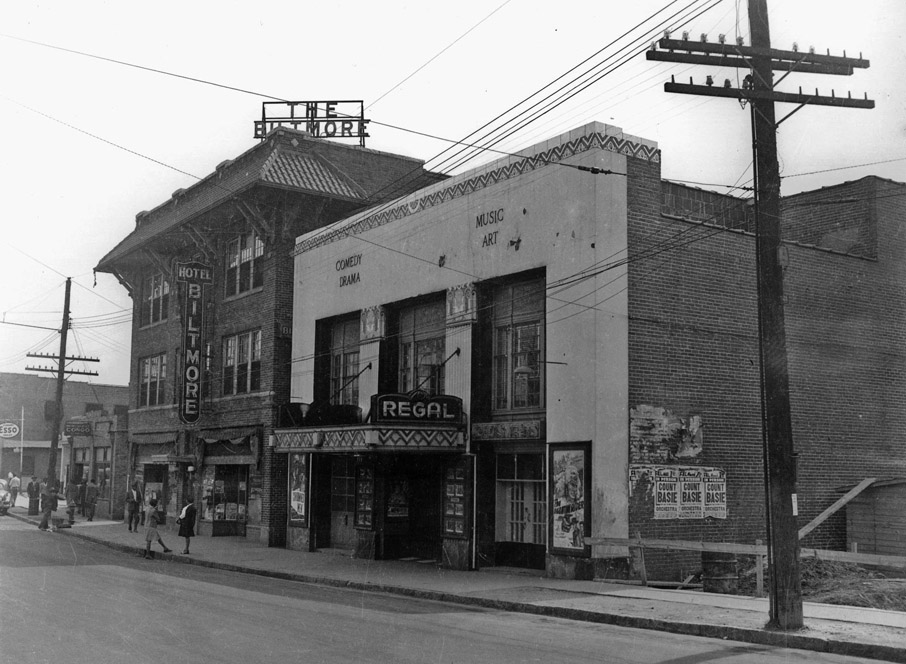 The Regal Theater was built in 1927 by George Washington Logan - providing a variety of entertainment, including musical performances by the likes of Cab Calloway, Fats Waller, Count Basie, Duke Ellington, and others. By the 1930s, it seems that the theater had become predominantly a movie theater. 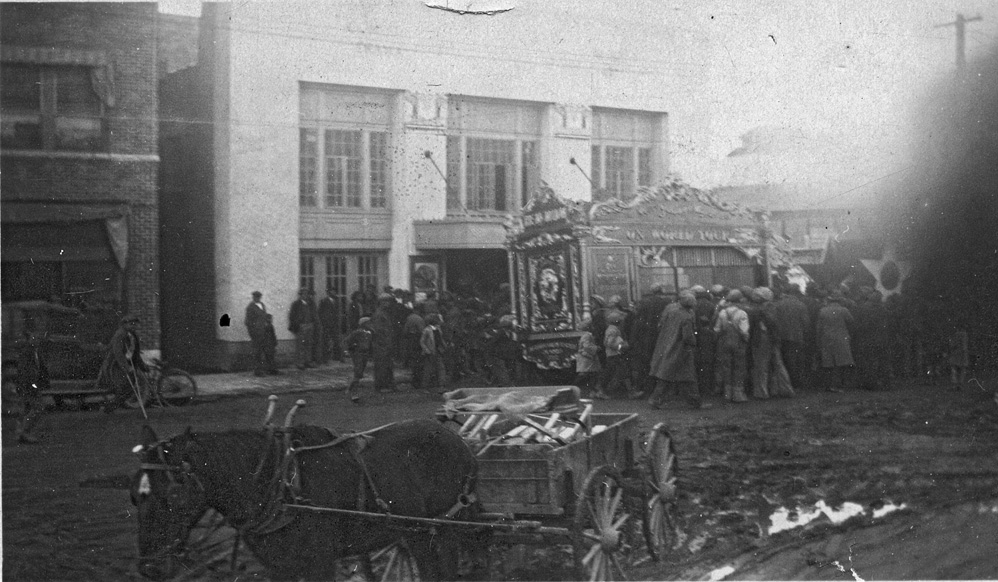 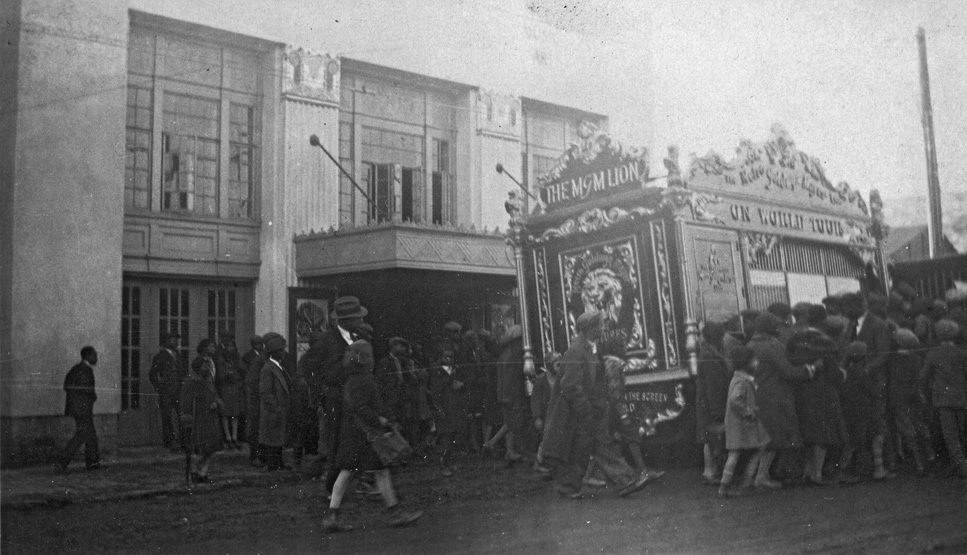 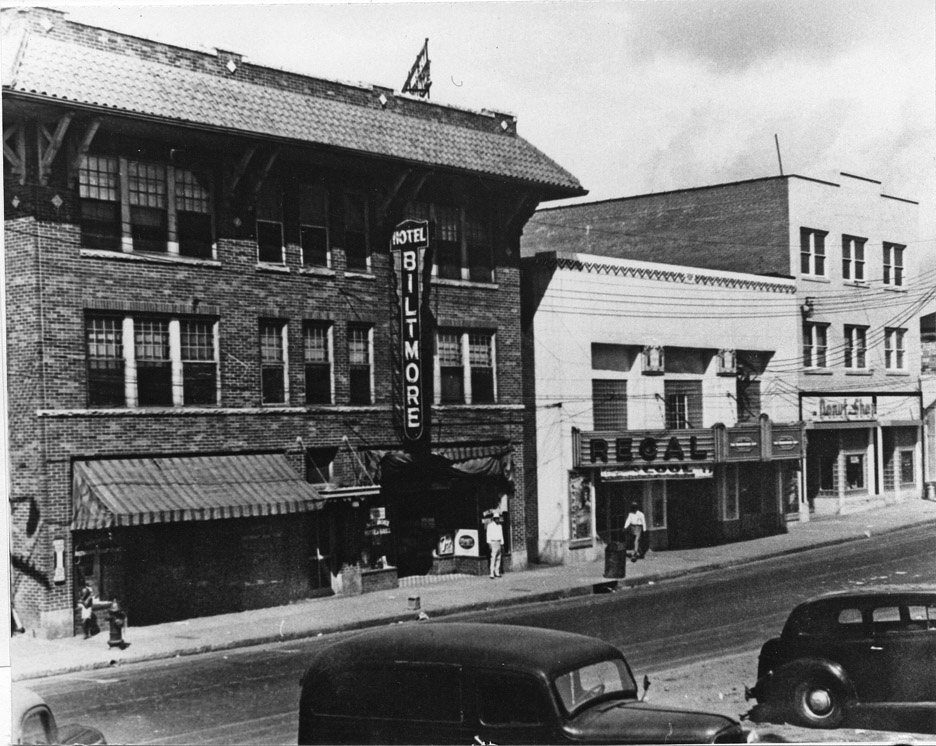 The Biltmore Hotel, Regal Theater, and Donut Shop, 1940s. The Regal has been remodeled to include two storefronts as well. The left storefront housed the Regal Barber Shop. 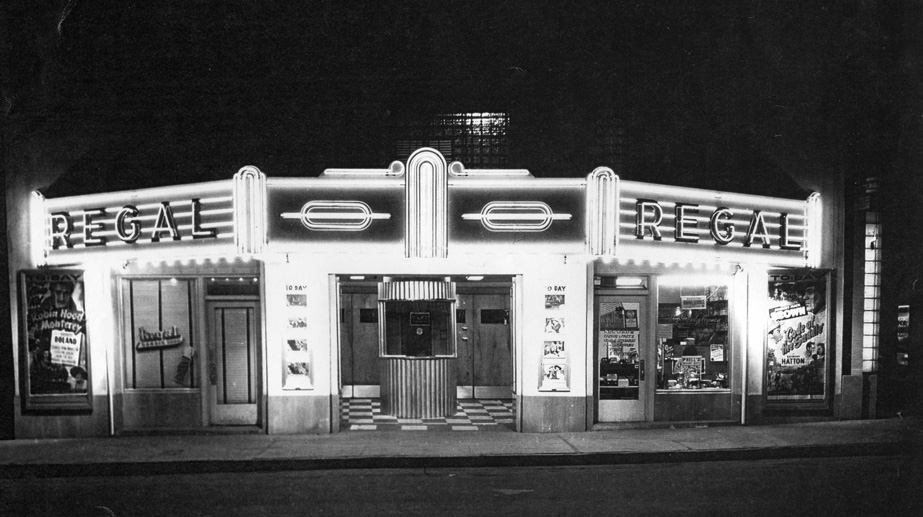 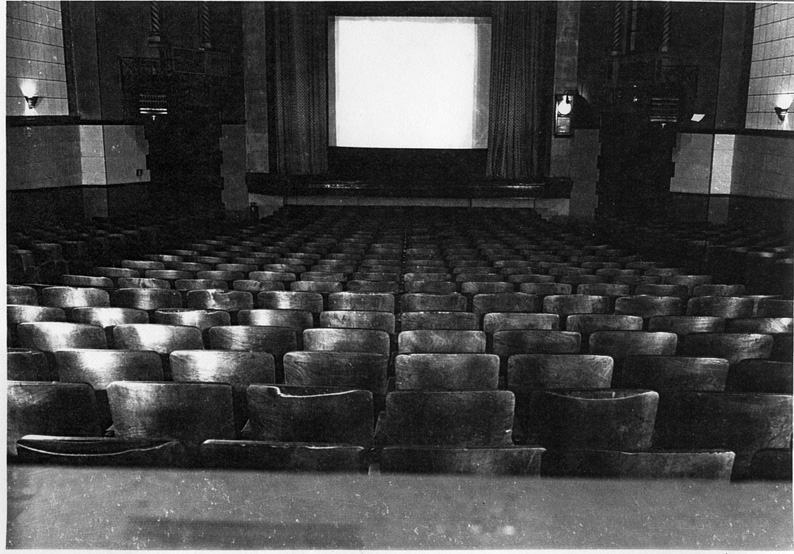 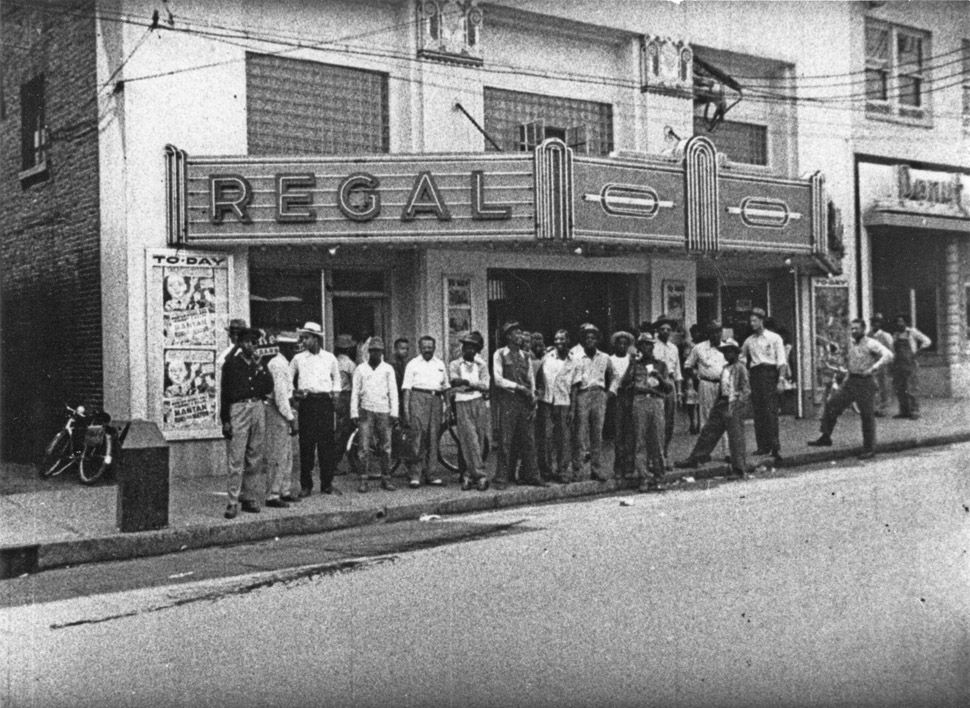 The later life of the Regal is a bit hard to piece together, as the city directories paint a fairly confusing picture. It does appear that the Regal existed in some form until at least 1968 - whether at this location or down the street.

This location housed the "Your Own Thing Theater" beginning in July 1969. 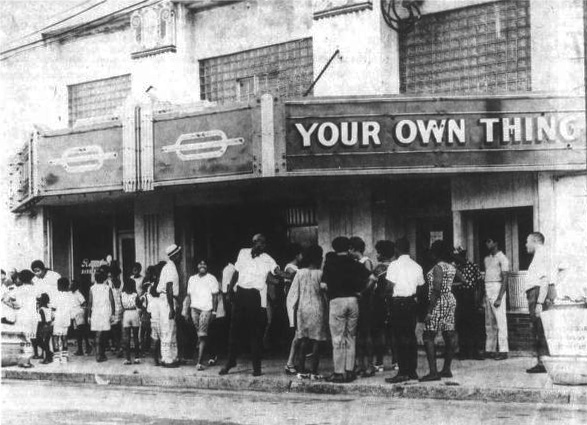 Photo from Carolina Times, July 26, 1969. Caption reads: "Early arrivals of 'first nighters' at the gala opening of 'Your Own Thing,' Durham's first and only theater devoted exclusively to the revival and presentation of the arts of black people." 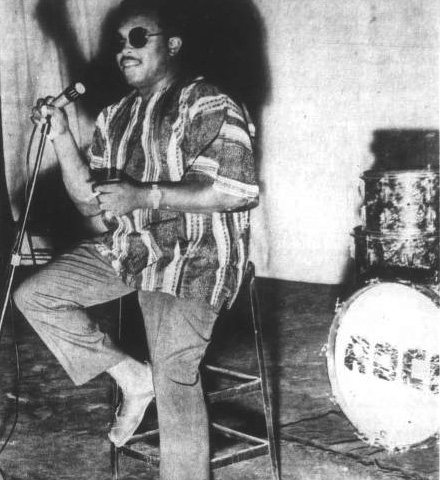 Ervin L. of radio station WSRC was master of ceremonies at the opening night of Your Own Thing Theater.

An article in the July 26, 1969, Carolina Times covered the theater's opening:

The July 16 opening of the former Regal Theater, this time with a new name, new purposes, and under new management, marked the beginning of what promises to offer excitingly different entertainment for theater goers of Durham and the surrounding community. "Your Own Thing," as the new theater is called, opened last Wednesday evening to an enthusiastic audience which included fans ranging in age from "eight to eighty." The entertainment bill featured many local musicians including the "Lee Darvis" combo, as well as the famous Donald Bird modern jazz group imported from New York City, especially for the theater’s premier opening...

According to Miss Karen E. Rux, a 1969 graduate of North Carolina Central University and the director of "Your Own Thing Theater," the presentation marked the beginning effort to bring to the Durham community, a spirited revival of the black arts which have been existing somewhat "incognito."...

Tentative plans include daily classes, workshops, all phases of dramatic productions, and films to be shown at 1, 3, and 7 p.m. The theater will be run for a year on present funds received through an agency of O.E.O. Although the present building has been made available until urban renewal necessitates its razing, long range plans hope for the construction of a new theater building... 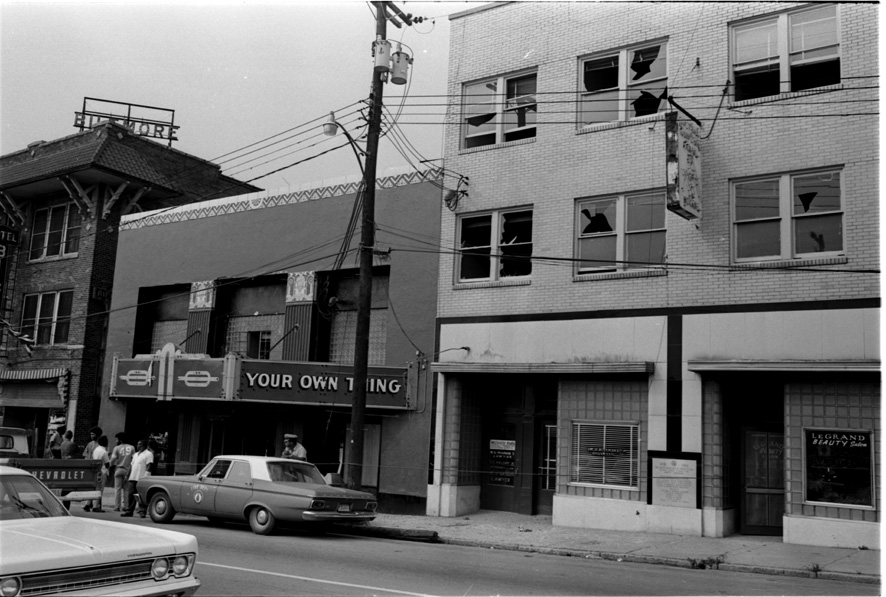 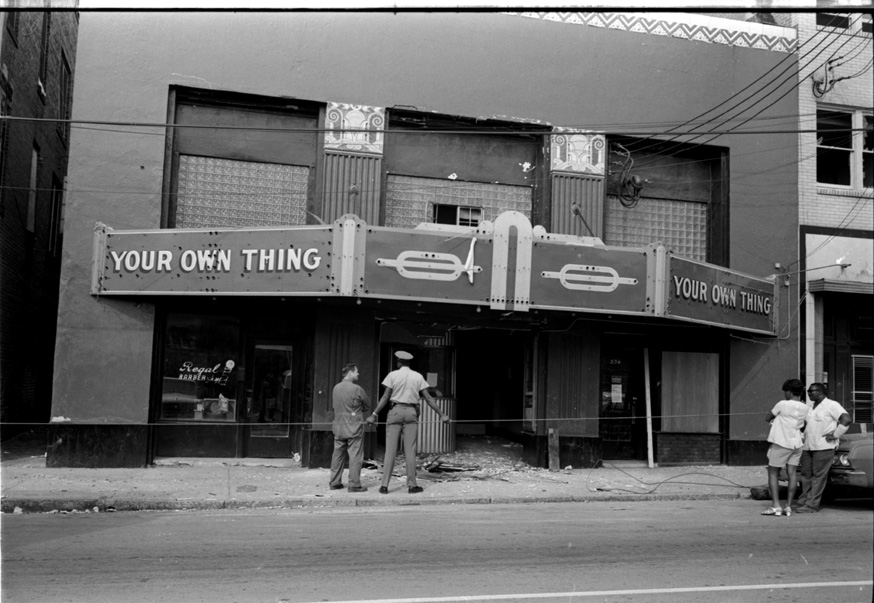 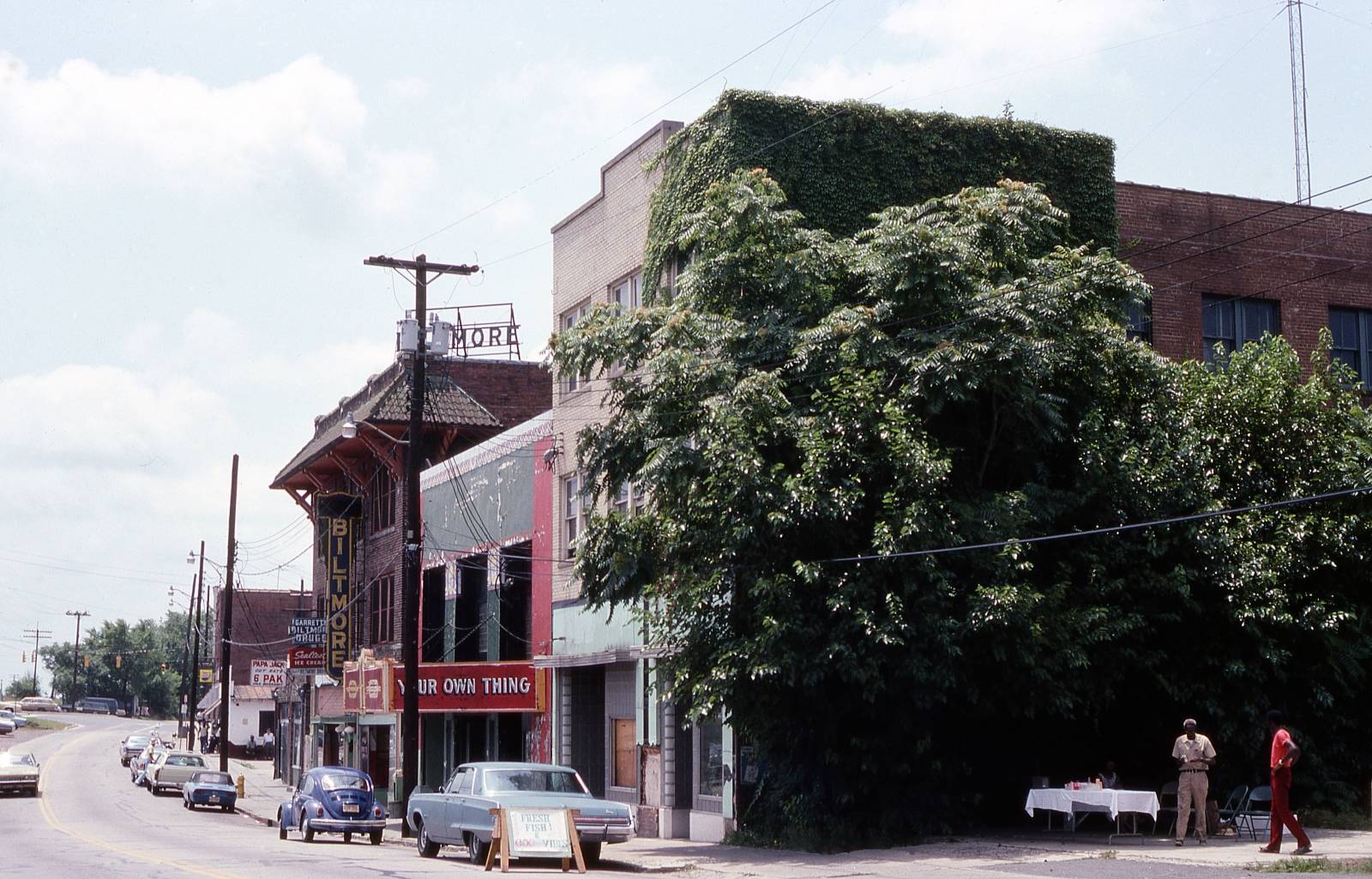 The building appears to have been torn down sortly thereafter. The site has been some form of parking lot since that time. 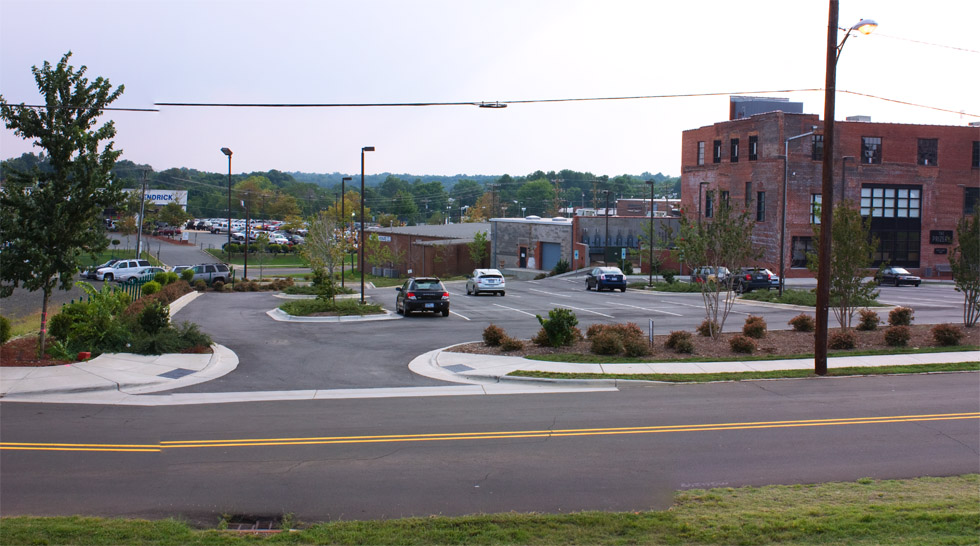 Yet another freakin' parking

Yet another freakin' parking lot. So many old theaters have been saved nationwide for community theaters. Durham gets asphalt.

The Your Own Thing theater

The Your Own Thing theater was bombed with ammonia dynamite in late June, 1970. CP Ellis, the Durham KKK president and Exalted Cyclops at the time (although not for long: he turned his back on the Klan a little over a year later), said the Klan was not responsible - and then offered a $100 reward for information leading to an arrest and conviction.

The blast destroyed portions of the marquee and front of the building, as well as knocked out the car windows of Durham detectives who happened to be in the area that late evening.

A gospel meeting had been held in the theater, letting out 30 minutes before the explosion. No injuries were reported.

Lewis Shiner's latest novel, Black and White, mentions the Regal, although the Wonderland Theatre contains much more of the narrative action. [The Wonderland was just down the block -- my bet is that Gary blogs this particualr theater next Wednesday!]

Thanks Andrew. What is the

Thanks Andrew. What is the source for the info about the theater bombing? I'd like to add it to the post.

I think the Wonderland will be next Friday or the following Monday.

What was the street address

What was the street address of the theater?

The primary address was 326 East Pettigrew Street, although the two storefronts were 324 and 328 E. Pettigrew. The confusing later life of the theater (to me, anyway) is because the address of the Regal suddenly shifts to 336 E. Pettigrew in the 1960s, and 326 is listed as vacant. However, I don't have a building that matches with that address. 336 disappears again when the "Your Own Thing" theater appears at 326 in the 1970s.

The bombing story comes from

The bombing story comes from two Morning Herald articles. I'll email them to you in case you want to quote directly any of it. I haven' yet dug deep enough to know if anyone was ever tried for the crime.

In the mid 1960's, I had a French teacher, with progressive ideas, at the all-white Durham High School, who took his whole class to the Regal Theater to see a french film. Very unusual at the time that white kids would be attending a black owned theater, so I remember the field trip very well.

My Dad will turn 93 in March. He lived on St. Joseph Street and went to the Regal as a boy to watch the westerns. He also went to the segregated Carolina up the Street and had to sit in the upstairs balcony. I spoke to him today. He remembers it well.