This one-story, hip-roofed house is three-bays wide and triple pile with projecting gabled bays on the façade. The earliest known occupant is G. H. O’Neal (inspector, American Tobacco Company) in 1919. 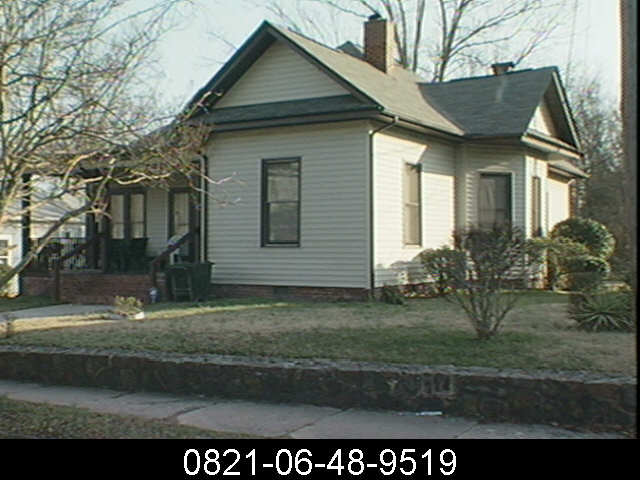 This one-story, hip-roofed house is three-bays wide and triple pile with projecting gabled bays on the façade. A gabled bay with canted walls extends from the right side of the house and a low, hip-roofed ell extends from the left rear. A hip-roofed porch with original slender square porch posts extends across the front of the house terminating at the projecting bay on the right side of the façade. The house has a brick foundation, brick stairs to the front porch, and two high interior brick chimneys. It is covered with vinyl siding, but retains one-over-one wood windows. The front door is a modern replacement but is flanked by original double-hung wood windows. The house sits on a wide lot and has a low stone retaining wall along the front of the lot.

The home at 821 Wilkerson Avenue was constructed around 1917, on what had previously been a large empty parcel of land which encompassed more than half the south side of the block.  The two houses flanking both sides of the house were built within the following few years, and between 1917 and 1925, eight new homes were built on its side of the block.  The diversity of forms and styles of these homes is rare to see in today’s new housing developments.

This simple Victorian home appears today much as it was when it was constructed almost a hundred years ago.  The most significant modification is the enclosure of what was likely a rear porch to create a new kitchen.  Fireplaces, which warmed the home before central air, can be found in four of the rooms.  Each has original mantels and tile surrounds, which differ from room to room.  Heavy, original moulding can be seen around the doors and windows.  Ceilings soar up to almost 11 feet in most of the primary rooms.  The original hardwood floors remain.   Most windows have been replaced, but the new ones are one over one like all of the original windows likely were.

The earliest known occupant of the home was George H. O’Neal, an inspector for the American Tobacco Company.  After O’Neal, E.S. Booth and wife Vallie Watts Booth occupied the house for several years before selling it to Sidney Thomas Scott, a grocery store merchant, and his wife Dora D. Scott in 1924.   Dora died in 1926. Sidney then married Beatrice S. Scott, who was a textile worker and later an inspector for the Durham Hosiery Mills. The daughter of Sidney and Dora, Tessie Scott, and her husband Edgar Lee Council appear to have moved in with Sidney and Beatrice around 1927 and lived in the house until at least 1949.  Edgar was a retail dealer of coal and president of Scott Coal and Oil Company.  Sidney and Beatrice continued to live in the house at until at least 1960.

The Durham Community Land Trust (DCLT), purchased the property around 1993 in an effort, along with other of its home purchases, to stabilize the neighborhood through ownership.  In 1997 the DCLT sold the home to Margie Shirleen Smith while maintaining ownership of the land.  Margie lived in the house until her recent death.