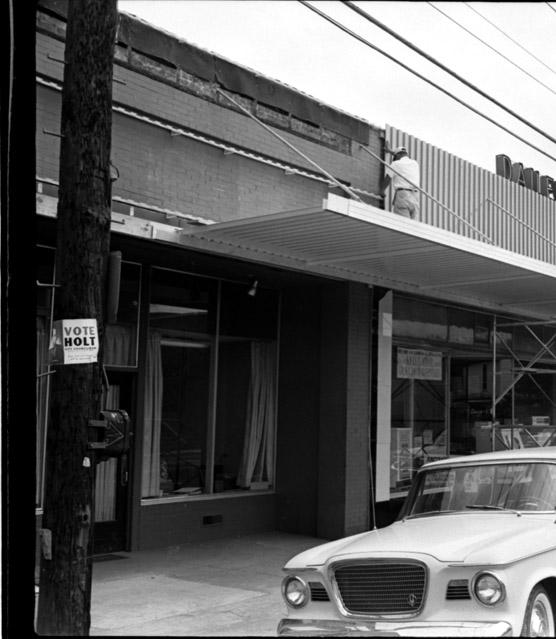 By the late 1950s, Bonardi's fruit and produce was out of business at 740 Ninth, it became the home of "Niagara of Durham Massage." By 1965, a slightly less shocking establishment on Ninth St., Bryant-Durham Electric, had taken over 740. (Sorry.) By 1970, it housed "Decorative Promotions", and by 1980, Dailer's Hardware.

By 1985,740 housed Triangle Gun Shop, and 742 housed the Bread and Board Cafe, which I remember fondly from my time as a Duke student. By 1990, 740 housed Delights Ice Cream Shop, which became a TCBY.

For ~ 10 years, 740 has housed International Delights - a Middle Eastern restaurant. (My own most significant memory of which is coming home late on Christmas Day in 1999 after 36 hrs on call in the hospital and eating chicken schwarma for Christmas Dinner because it was the only place I could find open on Christmas Day.) 742 has housed several incarnations of pizza purveyor, Devil's Pizzeria as of 2009. 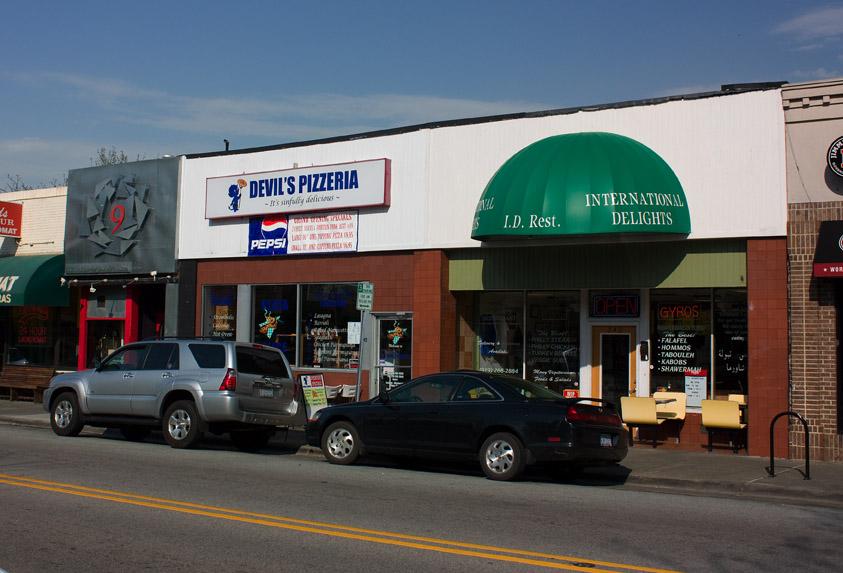 My understanding is that the previous pizza place at 742, which was "I heart Manhattan Pizza" (or something like that), was owned by a different group. ID had been leasing the space to them, but decided they could do better themselves, and opened "Devil's Pizzeria" in the space instead.

Thanks for remembering where Bread and Board was. I would always go around in circles when I try to remember where it was. My favorite part of Bread and Board was that when you ordered your sandwich, you'd get a large coin-like wooden piece with the letters "TUIT" printed on it. When you got your sandwich, you'd return this little chip to them like a ticket of some sort. This was all an elaborate pun -- "You'll get your sandwich when we get a round TUIT."

The pizza place there now has a checkered history of sorts. The building as a whole is owned by Gehad Lobbad, who owns International Delights. I <3 NY Pizza opened there sometime in the late 1990's, I believe, as part of a restaurant group from New York that had set up shop in Chapel Hill. They also owned a few other places on Franklin St., I believe, including the late and not at all lamented (by me at least) East End Martini Bar.

In 2001 or 2002 or so, Eric "Ricky" Scheiner, who I believe had been the store manager, took the place independent from the Chapel Hill group, and re-branded it Ricky's I <3 NY Pizza. In 2003, a lawsuit broke out in a disupte between Lobbad and Scheiner based on Scheiner never having gotten a valid sublease from the original ownership group, which Lobbad won and subsequently evicted Scheiner. The whole thing got very nasty for a brief period publicly, as Scheiner, who was Jewish, claimed anti-Semitism against Lobbad, who is an Arab originally from Palestine but more recently from Kuwait. John Stevenson put another notch in his rather inglorious tenure at the Herald-Sun by playing that tension up in a story about the dispute. (I must editorialize here for a moment. While Gehad is often grumpy towards customers, and I've seen him display a touch of mysogonism for a moment, I witnessed Scheiner on more than one occasion display rather blatant racism towards black customers. Beyond that, he was really freakin' obnoxious.) I have the text of that H-S article in my e-mail articles if anyone wants to see it.

I think another group of some sort took over the business and rebranded it "I <3 Manhattan Pizza." That ran for a while, but I think the business eventually failed. At that point, I think J.P. is right, and I think Gehad's son, whom I remember bopping around International Delights from the early 1990s, re-opened it as Devil's Pizzeria. For what it's worth, I think it currently has better pizza than it ever had under any of the old "I <3" names.

So does International Delights serve ketchup yet?

I believe the babaganouj sandwich comes with a side of ketchup.

If anyone knew Ricky from "I love NY Pizza", he was screwed over by his landlord and his former partners. He had a very successful business and was loved by everyone. I heard he recently opened a pizza place in north durham under Ricky's NY Pizza.

If anyone really knows Ricky he is a self-centered spoiled rotten brat who uses his dads money because at 40 years old has none of his own. he doesn't know how to run a business at his new place will be shut down very soon. He has no respect for anyone that has helped him out. He does nothing but uses the hell out of people. Trust me I am one of them.

If you really knew Ricky, you knew he came to NC with nothing but his furniture and a Cat. His parents have no money, so dont go throwing stuff around that is not true. He works hard and is building a business. Just because you cant do the same, dont go bashing someone.