This one-and-a-half-story, side-gabled bungalow is three-bays wide and double pile with a one-story, shed-roofed rear addition on the right side and a one-story projecting gabled bay on the left side. 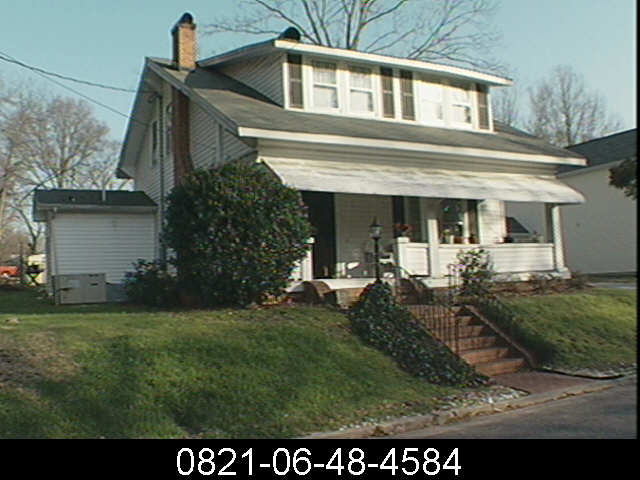 In 1916, carpenter Lacy A. Gibson purchased the southwest portion of fellow-carpenter John R. Smith’s property at 437 Wikerson (southeast corner of Wilkerson & Gattis). Gibson lived on Burch Avenue and had come to Durham from Alamance County with his older brother, around 1911. The elder Gibson was hired by well-known contractor Norman Underwood as a foreman. Underwood and his crew built B. N. Duke’s “Four Acres,” J. E. Stagg’s “Greystone,” Duke Memorial United Methodist Church, and many of the early Trinity College buildings.  Underwood himself lived in the West End on W. Chapel Hill Street.

Business was booming in Durham. By 1917, the older Gibson had gone into business for himself as a contractor and builder, and after his death in 1918 at the age of 30, the younger brother, Lacy, began his own general contracting business. Like Norman Underwood, the offices were located downtown in the First National Bank Building.

After purchasing the Gattis Street property in 1916, Lacy Gibson likely built the house himself, though he does not seem to ever have lived there. He sold the house in 1918 to sisters Mittie and Mattie Barrington and their “widowed” mother Addie.  (Although Addie called herself as a widow in city directories and censuses, it appears that she was divorced, as her former husband Hillard W. Barrington remained in Pamlico County and remarried a woman almost 30 years his junior a few years after his former wife and daughters moved to Durham. He died in 1944.)

The house the Barringtons purchased is a one-and-a-half story, side-gabled bungalow with a full-length engaged front porch and a wide, shed-roofed front dormer with two pairs of windows.  A full-length screen porch originally projected from the rear of the house.  The front of the house features large 9-over-1 windows.

The Barrington women had moved to Durham from New Bern around 1916 and may have come at the urging of Addie’s brother, Harvey A. Gaskins, who owned a music shop downtown on E. Main Street, where he employed his niece Mittie.  Mattie Barrington worked as a stenographer and bookkeeper for contractor Norman Underwood, as well as contractors Gibson & Cannaday.  Before long Mittie opened her own dressmaking shop called The Vogue in the First National Bank Building.  The Barringtons’ time at 507 Gattis was brief.  By 1922 they sold the house for $1000 to Everette D. and Lucy Stephenson.

Everette D. Stephenson was born in Wake County but was living in Durham by 1906 when he married Lucy Forsyth.  They had at least two children and a variety of vocations during their lives, though Everette is listed in city directories most regularly as a machinist, and Lucy worked at Golden Belt Manufacturing Company.  Their son Herbert E. Stephenson ran the Stephenson-Wilson Pontiac dealership for many years.  Everette Stephenson died in 1935, and Lucy continued to reside at 507 Gattis until she sold the house in 1945.

In 1948, Dennis E. Rochelle returned to his native Durham from New Jersey, where he had gone to find work during the Depression. He settled at 507 Gattis with his wife Virginia and their six children – three girls and three boys. Their son, also named Dennis, who was 15 when the family moved to Durham, said his parents bought the house for $7000, and that their mortgage payment was $33/month.  Dennis remembers the property being the size of a “postage stamp,” and explained that his parents eventually bought adjacent parcels of property from their neighbors to increase the size of their lot.

As Dennis remembers the interior of the house, one entered the front door into the reception room, where there was fireplace, a telephone and little furniture.  This was more of a pass-through room on the way to the kitchen or the living area. The room to the right as one entered through the front door was the parlor where the family spent most of their time.  This room also had a fireplace.  Behind this room was the dining room, also with a fireplace.  The kitchen was behind the reception room and adjacent to the dining room. Off the kitchen there was a pantry, as well as a screen porch off the back of the house.  Upstairs, the only bathroom in the house was to the right at the top of the stair.  The three Rochelle sisters shared the front bedroom, and there were two additional bedrooms where there is now one – one for Dennis’s parents, and one for the three boys.

Dennis E. Rochelle, Sr. worked as an auto mechanic and tow truck operator at both University Motors, located on Main Street between Duke and Gregson Streets, and at Morgan Motors, which had locations on both Foster Street and Hillsborough Road.  After raising her children, Virginia Rochelle went to work as a bookkeeper at Royal Crown Cola Bottling Company and later at Pepsi Cola Bottling Plant.  The Rochelles lived in the house on Gattis Street until 1971, when they purchased a larger house on Chapel Hill Road.

The Rochelles sold the Gattis Street house to Dr. H. Frank Forsyth and his wife Anne Cannon Reynolds Forsyth.  Mrs. Forsyth was the granddaughter of R. J. Reynolds. and lived for much of her life in Winston-Salem.  More research needs to be done to uncover why they purchased the house or if they ever lived there, but perhaps Dr. Forsyth spent time working or teaching at Duke.  From 1974 until 2005, the house was owned by the Dark family, first Raymond Dark and later Herbert Dark.

In 2015 the house was purchased by Trans Perry of Transition Renovations, who undertook a complete and thoughtful renovation of the property.  He removed the aluminum siding from the house as well as two minor additions to the house that had taken place over the years.  He extended the rear of the house, incorporating the former screen porch and changed the kitchen into the master bedroom, adding a shed-roofed one story addition onto the north side of the house off the bedroom to make a new full bathroom and utility area.  The former dining room became the new kitchen.  Upstairs two bedrooms were made into one larger bedroom.  Outside a concrete drive and patio were added.

The current owner, a native of New Zealand who has lived in major metropolitan areas in the US and UK, was looking for a home with personality that would reflect the authentic character of North Carolina and found it at 507 Gattis Street.  He enjoys the neighborhood, the nearness of the community garden, the proximity of Duke and downtown, and being able to run and walk easily throughout much of Durham.